Ahead of tomorrow’s new update, let’s take a look at everything you need to know about the new Haunting of Verdansk limited-time event.

As we get closer and closer to Halloween, Infinity Ward and Call of Duty are getting in the spirit with a new limited-time event called The Haunting of Verdansk. From tomorrow (October 20) to November 3, Verdansk will be plunged into darkness, with some familiar faces also joining the battle. With many new modes, operators and much more coming to Warzone, here are all of the major changes you need to look out for coming tomorrow.

For the first time since its release, you will be able to play Warzone in a completely new nighttime mode. While it won’t be in complete darkness, Thermal optics are advised and will help in low-light areas. 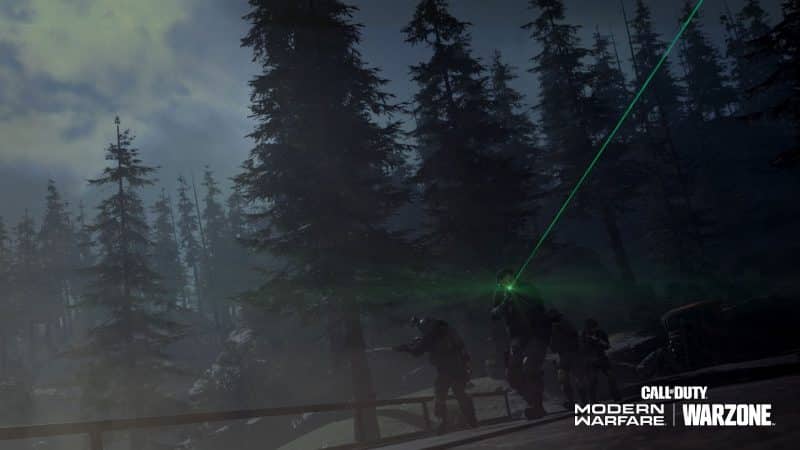 However, there are more surprises within this nighttime mode. Some TV sets will show a ventriloquist doll is tuned into a defunct channel, and the poltergeist of a chainsaw-wielding killer can supposedly be seen and heard across the Krovnik Farmland.

It wouldn’t be Halloween without some Trick or Treating. Infinity Ward are bringing this to Warzone through supply boxes hidden around Verdansk. Day or night, these can be found and opened for the chance to receive rewards such as weapon variants. However, these may also contain a jump scare, so open at your own risk.

In one of the biggest additions from this update, a new Zombie Royale mode will be coming to Warzone. Zombie Royale is a mode where death is far from permanent. Instead of being sent to the Gulag, dead Operators will return as a Zombie. While they can’t use weapons, Zombies have supernatural abilities such as increased speed, improved jumps, deadlier melee attacks and thermal vision. 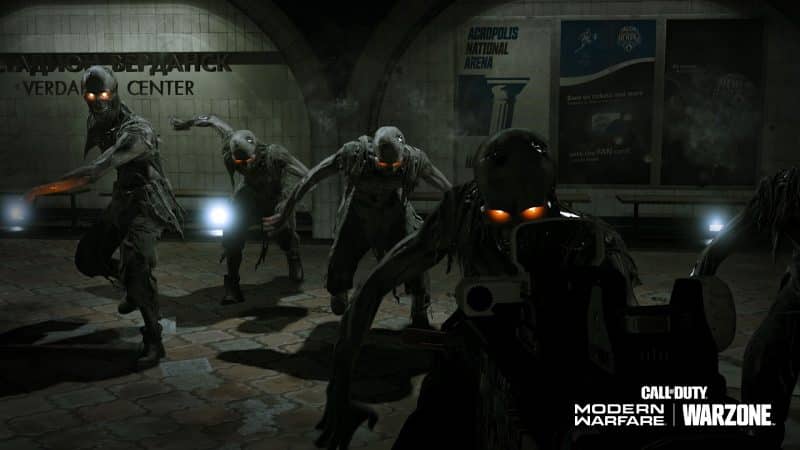 When a player is killed, they drop a syringe which shows up on the map. If you collect two of these syringes as a Zombie you’ll return to battle with your loadout and land on your squad for a second chance. The last team standing with one alive Operator wins, even if the rest of the squad has turned to Zombies.

Some familiar faces from blockbuster Halloween movies will be headed to Modern Warfare and Warzone. Billy the Puppet from SAW along with a Texas Chainsaw Massacre bundle will both arrive in the store.

The SAW bundle features a skin along with a new Phlebotomozier lethal equipment piece. This is a special throwing knife that will drill into enemies upon impact. Along with this, a blood-red tracer pack will be included in the form of an Assault Rifle and Shotgun variant, as well as a Cargo Truck skin, tricycle charm and more personalization content. 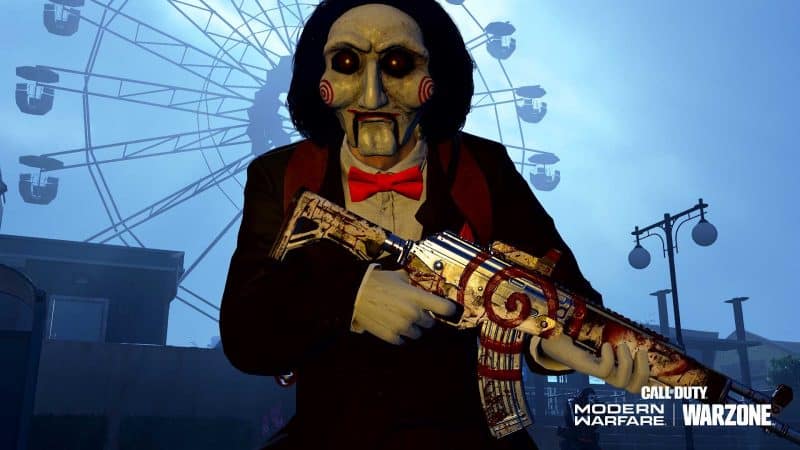 The Texas Chainsaw Massacre bundle features the iconic character skin and the “Family Heirloom” LMG blueprint which features a special stock allowing the player to hold it like a chainsaw. It also includes a new melle blueprint which is a one-handed hammer, an SMG blueprint and a vehicle horn along with other personalization content.

The Haunting of Verdansk begins tomorrow October 20 and will last through until November 3.