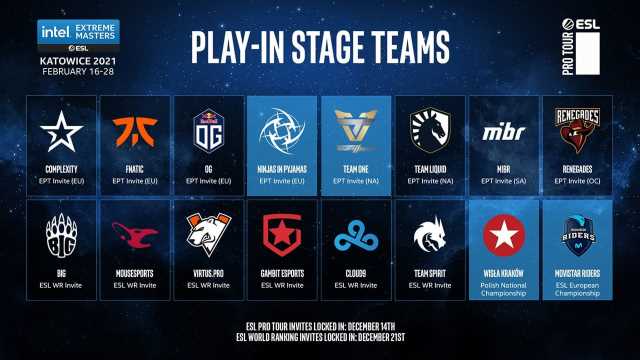 The online period of CS:GO has shown us how teams compete against each other, but there will be more at stake. There’s big money up for grabs — as well as an opportunity to achieve an Intel Grand Slam title.

IEM Katowice 2021 boasts an impressive line-up of teams, and those who’ve been missing some LAN CS:GO will want to tune in when it kicks off on Feb 16.

IEM Katowice 2021 features three stages; the Play-Ins, the Main stage, and the Playoffs.

A double-elimination bracket has been added to the Play-In stage. The opening brackets will be a best-of-one, while every following match will be decided in a best-of-three series.

Eight teams from Play-Ins will be moved up to the Main Stage. Where the 16 teams will be divided into two groups that adopt double-elimination formats.

The top three teams of each group, six total, will be promoted to the Playoffs, which will be single-elimination. The Quarterfinals and Semifinals, however, will be best-of-three, while the Grand Finals will be a best of five.

Last year, IEM revealed which lucky squads received direct invites. With eight in total handed out, here’s who got to skip to the main stage;

Of course Vitality, Na`Vi, and Astralis are bound to put on a good show. But we’re also likely to see some feisty action from FaZe — they’ve recently undergone a roster shuffle ahead of the main event.

Plenty of teams duked it out across Regional Qualifiers, the ESL Pro Tour tournaments and ESL World Ranking events for a chance to fill out the final sixteen spots at the event. Here’s a look at all the teams that made it to the Play-Ins;

And amongst the sixteen, there are definitely teams who have a chance at the top. Since Team Liquid’s new addition, Gabriel ‘FalleN’ Toledo, they’ve seen some impressive results. Although it hasn’t been perfectly smooth sailing for the EU team; Astralis swept Liquid back in December last year, 3-0 at the IEM Global Challenge. If they make it through, we might get to see a grudge match play out.

Another up and coming team worth keeping our eyes on during the Play-Ins is German roster BIG. Currently number four in the world, BIG have been seeing some surprising victories. They just beat Astralis to qualify for the BLAST Premier spring finals.

Despite not always being in the limelight, BIG’s roster have been competing alongside each other for quite a while now, and they’ve got enough synergy between them to take another surprising win at Katowice as well.

Katowice is set to run Feb 16 through to the 28, making nine full days of top tier CS:GO to enjoy!

Play-Ins will run Feb 16-17, and we’re definitely sure to see some action on our opening day; with Team Spirit set to face off against Cloud 9 and OG and Fnatic going head to head.

On Feb 18 we head into the Group Stage, where the bulk of our competition will really get the chance to shine. Groups wrap up on Feb 22. After a short break we’re into the Playoffs which run from Feb 26-28.

You can check out the full schedule here.

Stay tuned to ESTNN for all of the latest CS:GO news and highlights!