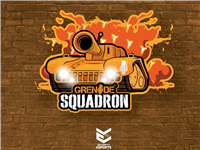 Performance nutrition brand Grenade has made its entry into the esports scene through the co-creation of ‘Grenade Squadron’, one of the six esports teams competing in the Celebrity Esports Superstar League.

Starting in April 2021, the league pits celebrities head-to-head against each other across a range of title, via the use of branded esports teams.

Following the recent partnership between Grenade and UK street dance group Diversity, all of its members will join the Grenade Squadron team. The esports team will compete across all seven fixtures of the league, with each match consisting of two Diversity members and one fan, with a new fan also acting as the team’s captain.

Alan Barratt, CEO of Grenade commented: “We’ve been fuelling elite sports since 2009, so entering a team into the Celebrity Esports arena was a logical lunge forward.

“Fighting on all fronts – even on our rest days – Grenade Squadron will be the ‘sweatiest’ team out there. Watch this space, we’re here for the win.”

Also partnering with Celebrity Esports is the major fashion retail store Primark, of which its team – named Primark Legends – is made up of Love Island star Kem Cetinay and footballer Chelcee Grimes.

Other celebrities announced for the competition include Boxer Tony Bellew and footballer Adebayo Akinfenwa among others.

Leo Skagerlind, CEO of Celebrity Esports added: “To have a team sponsor like Grenade who are as fired up and passionate about their business as we are about ours means we can work together to really change the game for esports.

“Being such a competitive team, we’re excited to see how Grenade Squadron do! They’re a great addition to the League.”

Esports Insider Says: The Celebrity Esports League is a chance to bring an esports experience to a mainstream audience, and the addition of brands such as Grenade and Primark showcase how big the event could be. We look forward to the potential success of the event!