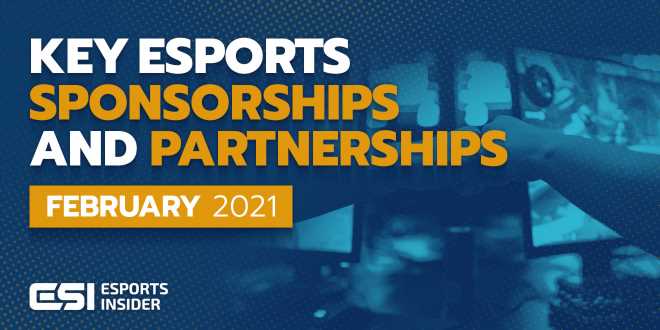 Each month Esports Insider sifts through the period’s sponsorships and partnerships, collating the most significant into a single article. Simply click the corresponding link to read more about a story!

Star search: A look inside the Team Singularity Esports Academy

The new Team Singularity talent academy is live on Pluck GG. Currently offering Fortnite, Pluck and Singularity will soon expand the initiative to include several other titles.

Singularity (Denmark) and Pluck (Sweden) share a Viking tradition, according to Pluck CEO Erik Lydecker — an ability to build strong connections around the globe and blaze a trail for others to follow.

Esports Insider’s H.B. Duran sat down with Lydecker of Pluck GG, as well as Atle S. Stehouwer, CEO of Team Singularity, for a look inside the academy.

Earlier this month ESI reported that Bayes Esports is now the exclusive data partner of tournament operator Beyond The Summit. The deal pertains to in-game data for all Beyond The Summit events in 2021.

There’s a lot to unpack here. Click the link above to read ESI’s exclusive interview with Bayes CEO Martin Dachselt and Beyond The Summit Commentator and Managing Partner, David ‘LD’ Gorman.

In Italy, Freaks 4U Gaming and ProGaming Italia have partnered to develop ‘Agent’s Range‘ — a new VALORANT platform for fans and players.

ESL Gaming, a company now comprising ESL and DreamHack, announced in February it had renewed its long-term paysafecard partnership. The UK-based ESL Premiership also announced a deal with energy drink and nootropics brand Beyond NRG.

The first, with esports data company GRID, will see the pair work together on the CSPPA’s CS:GO global rankings system for individual players.

The second, with EPIC Risk Management, is an initiative targeting problematic gambling in esports, with the companies becoming global ‘Gambling Awareness Partners’.

Team Liquid, as ever, was busy on the partnerships front in February. The org struck three new partnerships: one with anime brand Naruto; one with trading firm and market maker IMC; and one with Bud Light. Click the links in the title to learn more.

UK-based event operator Epic.LAN was also busy last month, agreeing deals with Intel, Logitech G, and Overclockers UK. Click one of the links above to learn more about a specific deal.

OPPO sponsors MPL and Wild Rift tournament in the Philippines

Esports analytics platform Esports Charts has set up a data partnership in India with Irony Inc. Irony will represent Esports Charts and Streams Charts in India.