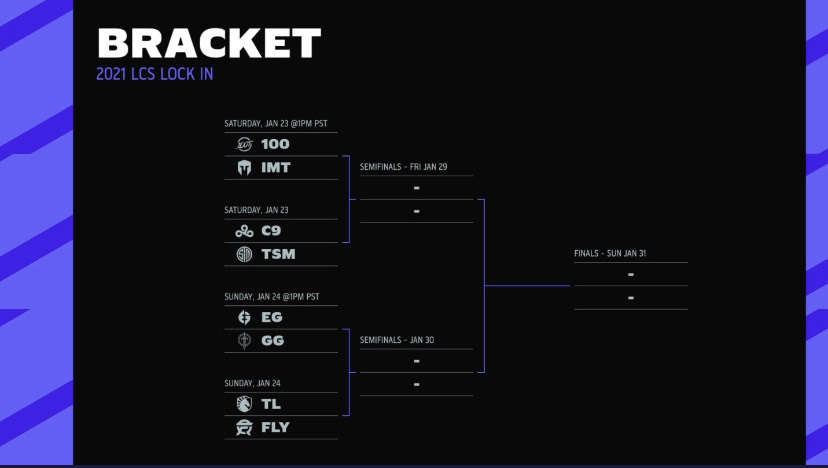 The League of Legends Championship Series Lock In tournament starts heating up as the group stage ends. Friday’s matches would determine the seeding for the upcoming quarterfinal on Saturday and Sunday. The top four teams from each group will move forward in the tournament with the remaining two teams saying goodbye. Here are the results from the League of Legends Lock In on day four.

Cloud9 came into today’s first match 2-1 in second place for their group with Dignitas 1-2 and looking to stay alive. With C9’s recent addition of Luka “Perkz” Perković going up against the rookies on Dignitas, the match appeared to favor C9. However, that was not exactly the case as Dignitas managed to keep the game close and get three of the five dragons for themselves. C9’s veteran talent ended up being no match for the rookies in the end as Dignitas fell after 36 minutes. With over a 10,000 gold lead and 11 towers, C9 easily closed the game. Dignitas finished 1-3 in their group and did not advance to the quarterfinals.

100 Thieves’ impressive performance against Team Liquid and TSM proved to LCS fans that they were top contenders. However, their fall to CLG in day two of the group stage had some questioning if it was a fluke or a crack in 100T’s armor. Golden Guardians, on the other hand, were looking to prove themselves in the group despite their lack of veteran talent. In the end, 100T proved to be victorious as they took down GGS after 31 minutes. Mountain Soul and Baron were GGS’ downfall, as 100T had snowballed the game out of control. 100T finished first in their group, while GGS managed to move on to the playoffs.

Evil Geniuses came into the final day of groups 3-0, which meant they would be advancing regardless. FlyQuest, on the other hand, came into Friday’s matches 0-2 with the possibility of missing out on the knockout stage. It seemed impossible for Fly to defeat the undefeated team, but they absolutely popped off in their third match. They took down EG in 34 minutes without Baron and 14 kills to a measly 4 on the side of EG. EG finished first in their group, and both have advanced to the quarterfinals on Saturday.

Both Team Liquid and TSM came into Friday’s match 2-1, having both only lost to 100 Thieves in prior matches. Whoever walked away with a win today would finish second in their group and have higher seeding in the playoffs. While many fans hoped the match would be close, it most decidedly was not. Liquid completely obliterated TSM in a 25-minute match. With a gold lead of over 14,000 and 18 kills to TSM’s 3, Liquid was able to close out the game easily. Both teams will advance to Saturday’s quarterfinals.

FlyQuest saved themselves from relegation with their win over Evil Geniuses, but they would still have to face Immortals for seeding. Both teams entered the match 1-2, but only one could walk away with 3rd place in their group. The Immortals held their own against Fly for the first 36 minutes of the game until a misplay at the dragon pit. Fly capitalized on the Immortals’ lack of positioning and was able to close out the game after 38 minutes. Despite the loss, the Immortals will still advance to the playoffs alongside Fly.

You can catch the quarterfinal matches Saturday and Sunday Jan. 23-24 on Twitch and YouTube.

For more League of Legends Lock In coverage and results, stay tuned to Daily Esports.