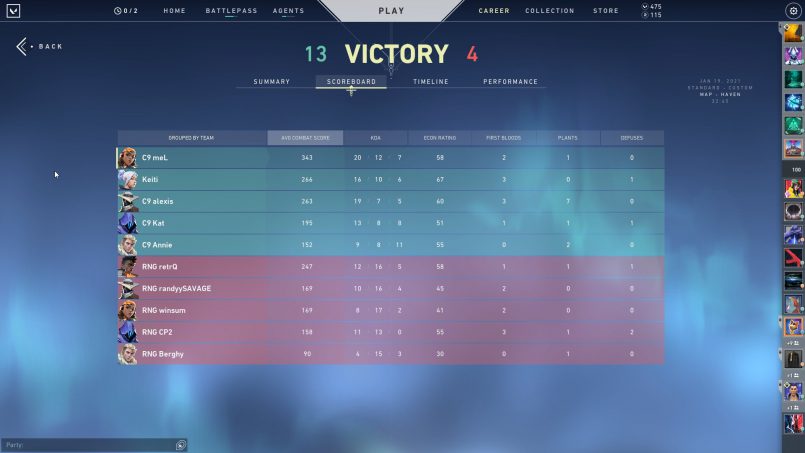 Tuesday night was an important moment for the growth of women’s esports as all-women Valorant team Cloud9 White defeated Renegades in a resounding victory during the World Showdown of Esports qualifier tournament. The competition will qualify four teams for a $10K USD event to be held on Jan. 26. Later the same night, C9 White went on to defeat Able Esports, putting them one match away from qualification.

According to Liquipedia, the win was a significant upset – Renegades is currently ranked 16th in North America with C9 White ranked 25th. To date, the win is perhaps the most significant victory for an all-women’s team against a pro squad in any team-based esport.

Of course, there will be detractors looking to downplay the significance of this win. The WSOE qualifier is a lower tier competition than many we’ll see this year. No team ranked in the top 10 is competing in the event. However, every single win C9 White achieves in the male-dominated Valorant ecosystem this year will play a pivotal role in changing the conversation surrounding women in esports.

Detractors have unfortunately had plenty of ammunition against women’s esports teams in recent years. Outside of Counter-Strike: Global Offensive’s robust women’s ecosystem, many of the most prominent all-women teams (particularly in League of Legends) have been regarded as little more than publicity stunts. The most recent example was Vaevictis Esports – a group of comparatively low-ranked women competing in Russia’s League of Legends league, the LCL. The team would lose matches in stunning fashion, ultimately departing the league due to poor performance.

When Cloud9 announced its women’s Valorant roster, many were expecting another Vaevictis or Team Siren stunt, but C9 White is a different beast entirely. Every member of the squad has achieved the highest rank on Valorant’s competitive ladder. The team has already proven it is the best women’s roster in Valorant by storming through last year’s FTW Summer Showdown. However, the question remained: could a team of women defeat a proper, esports org-affiliated team?

Now that question has been answered with a resounding “yes.” Whatever happens during the rest of the WSOE event, or the remainder of the 2021 Valorant season, C9 White will have played a role in changing the conversation for women in esports. As history shows, that conversation will inevitably continue to change until the detractors have no ground to stand on any more.

Since it keeps coming up in the esports conversation, let’s look at chess as an example. The game has been around for centuries, and for a long time many of its elite went on record stating that women would never be able to compete with men. Over time, however, women began to compete more and more in men’s competitions, winning against highly rated men and claiming Master level titles. In 2002, Judit Polgár defeated the world No. 1 Garry Kasparov in a game. In 2003, Susan Polgár became the first woman to be named “Grandmaster of the Year.” Women in chess have shattered every possible limitation the men of their sport could place on them to the point where now any person suggesting women can’t compete with men in chess should be laughed out of the room.

Esports is on that same trajectory, and I cannot wait to see how many barriers C9 White can destroy as the team makes its mark on history.