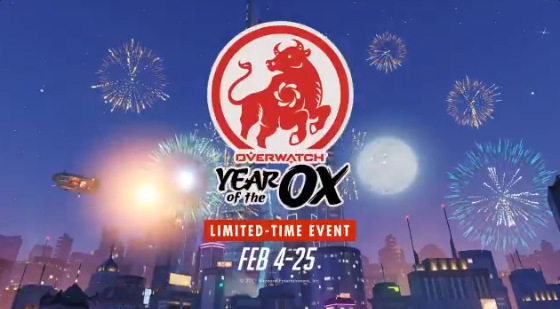 This year’s Overwatch Chinese New Year event, the Year of the Ox, is coming later this week on February 4. The new event will contain plenty of new skins, emotes, and sprays. Anyone who owns a copy of Overwatch will be able to play in it until February 25. You might recognize some of the in-game changes if you played last year‘s Year of the Rat event.

Year of the Ox event

You’ll be able to unlock new in-game cosmetics through Overwatch’s lootboxes including a bunch of new skins with special Year of the Ox designs. Devoted skin hunters will also be able to purchase skins from previous Lunar New Year events as they are only available during this time of the year. We should also see new emotes with this limited-time event, similar to this firework emote for Junkrat from a previous event.

The Junkrat emote from the Year of the Rooster trailer.

New highlight intros, including the one shown in the trailer, for the play of the game are included in the event. One intro shows D.Va using her self-destruct ability to set off  her mech like a Lunar New Years firework display. The popular Capture the Flag game-mode is also returning. Control maps such as Lijang Tower are getting slight redesigns and facelifts to accommodate the mode.

We haven’t gotten any additional news about Overwatch 2, Blizzard’s sequel to their class-based shooter, in recent months. That could change soon as Blizzard’s annual convention, BlizzCon, kicks off on February 19. Fans expect to see something about Overwatch 2 there, even if it’s just another teaser.