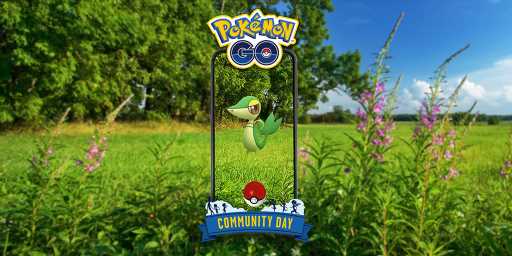 Pokémon GO developer, Niantic, has officially revealed details about the April Community Day event. This will take place on April 11 from 11 a.m. to 5 p.m. local time and will feature the Grass-type Pokémon, Snivy.

As with every Community Day event, the featured Pokémon will spawn more frequently and have an increased chance of being shiny. Players will fully evolve Snivy during the Community Day hours. Two hours afterward, they will also get a special Serperior that knows the Grass-type move, Frenzy Plant.

Community Day will feature two additional bonuses during event hours as well. Incense will last for three hours and catching Pokémon will award three times as much Stardust. A special, limited-time box will be available in the shop prior to and during the event as well.

Snivy’s Community Day also marks the first time a starter Pokémon will appear in the event since January of 2020. Tepig and Oshawott are the other starting Pokémon from Unova and both have not yet had Community Days.

Snivy made its first appearance in the franchise as one of the three starter Pokémon in Pokémon Black and White. It evolves into Servine and then Serperior; all mono Grass-type Pokémon. Snivy came to Pokémon GO in September of 2019. It takes 25 Snivy Candy to evolve it to Servine and then 100 to evolve Servine to Serperior.

Serperior hasn’t been a top pick for raid battles or PvP in Pokémon GO so far. It gets overshadowed by other Grass-types, especially those with access to strong moves like Frenzy Plant. Venusaur and Meganium highlight this list. Getting Frenzy Plant this Community Day will give Serperior a nice boost in power moving forward.

In the core game series, Serperior was a solid option due to its Hidden Ability, Contrary. Contrary made it so that losing stats would actually increase them. This allowed Serperior to use Leaf Storm and increase its Special Attack by two stages instead of dropping it by two, making it a great STAB Grass-type attacker.