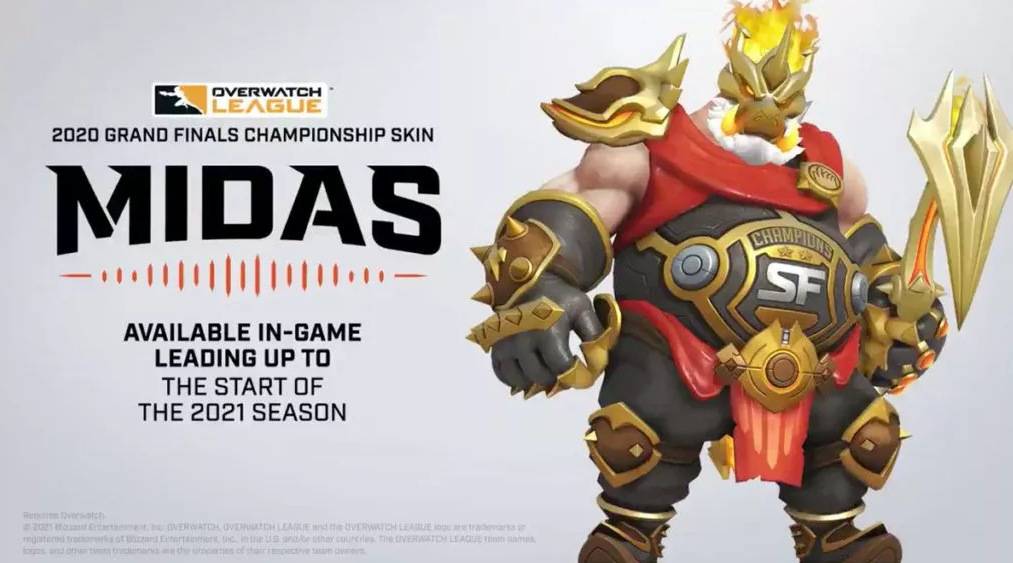 The San Francisco Shock have received a new Roadhog skin for their 2020 Overwatch League championship win. This skin was shown after the first game of the Shock vs The World series at BlizzCon 2021.

Naturally, the skin named Midas has a lot of gold on it. Also, the championship ring inspired stomach design is a nice touch, displaying the world ‘champions’ along with the Shock logo. Much like previous years, the skin is for the hero that led to the championship win. With how crucial Roadhog was in the 2020 Grand Finals, it’s fitting that this skin is being released. However, the skin doesn’t have a set release date as of yet. The video announcing the skin simply stated ‘available in-game leading up to the start of the 2021 season’.

This new Midas skin harkens back to the Flying Ace Winston skin for the London Spitfire, and Thunder Doomfist skin for the San Francisco Shock’s first championship win.

Shock vs. The World

On the second day of BlizzCon 2021, the San Francisco Shock faced off against many opponents across the World in many different matches. While all these bouts were related to Overwatch, not all were in the game proper.

The first map was the popular workshop gamemode ’12 Hogs 1 Hole’, where both teams aimed to hook each other into the classic chasm in Ilios: Well. Shock dominated, leading the series.

However, the World had tricks up their sleeves for easier wins. The next game mode was a drawing game, which casters Salome Soe Gschwind-Penski and Matt “Mr X” Morello won over Shock players Charlie “nero” Zwarg and Myeong-hwan “smurf” Yoo. This tied the series leading into a more wholesome competitive mode. Shock head coach Dae-hee “Crusty” Park faced off against the popular Craig Krum, known as Lucio Dad. Krum’s popularity came out of his son tweeting his playstyle of Lucio, moving his whole body as he would move around in game. They faced off in a 1v1 Capture the Flag, which Crusty won but Lucio Dad kept close.

Shock’s main tank Matthew “super” DeLisi then faced off against head of the Overwatch team Jeff Kaplan in a dad joke face-off. Jeff won, leaving the Shock vs. The World series hanging on the final map. It all culminated in a showmatch with former and current Overwatch League players across the league facing the Shock. The World team had players such as Dong-jun “Rascal” Kim, Dusttin “Dogman” Bowerman and Nikola “sleepy” Andrews. The World had an advantage of choosing the heroes the Shock had to play, and won easily with that help. That also meant the World team won the entire event.