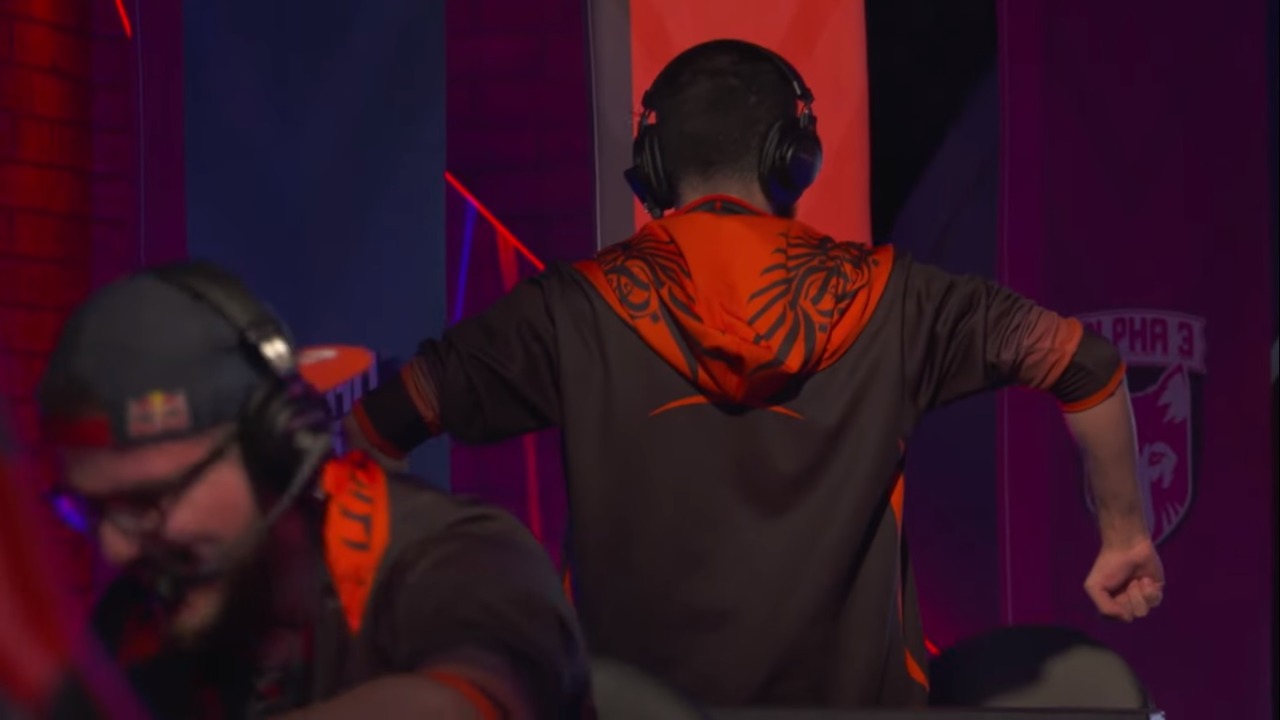 This past Thursday was week 12 of Street Fighter League Season 3, and with only four more weeks to go until the playoffs, every match is more important than ever. This week placed Alpha 3’s Punk, Nephew, and CJ Truth against UYU’s Oil King, JB, and Kami. The second half of the night was NASR’s Samurai, Angry Bird, and Big Bird versus Dynamite’s MenaRD, Smug, and Gamerbee. To start off the night, UYU banned Cammy targeting CJ Truth, and Alpha 3 made a bold pick and chose to ban Falke.

Why is that such a big deal? Well, nobody on UYU has ever played Falke in a competitive event before. This ban was Alpha 3 saying, “We don’t care who you pick, we will beat you anyway.” Alpha 3 has been riding high off their last few victories in Street Fighter League, but if they aren’t careful it will come back to bite them. The first match of the night was Punk’s Seth versus JB’s Rashid. Now that the bans have reset, players like JB are able to use their main characters to their full potential. For the first time this season, Punk could be seeing wearing a hat during his match, further showing how little concern Alpha 3 had for their opponents. Punk went to win the first game 2-0.

JB wasn’t going down without a fight however. JB won game two 2-0 with a huge backswing of momentum. In the final game, Punk took his hat off and looked to be finally taking things seriously. It was too little too late though, as JB took game three 2-1, putting a point up on the board for UYU. This was a huge start to the night for UYU and a great performance from JB, as well as some fantastic teamwork from every member of UYU. The second match was CJ Truth’s Necalli versus Kami’s Seth. Akuma and Seth are great picks in this matchup, but Kami seemed more confident in the matchup with Seth. Kami won game one 2-0 with a very impressive combo ending round one of the set. 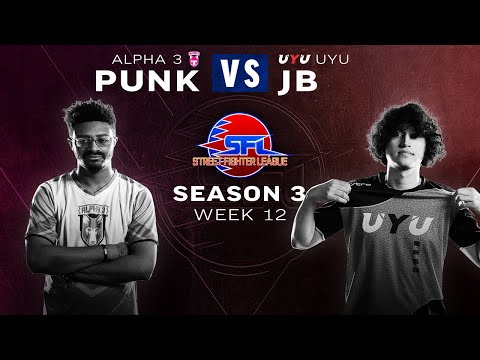 However, Nephew was able to take games one and two 2-1 in a still very close set as each round came down to the wire. Nephew still had JB and Kami to worry about, though. After some advice from Oil King on V Trigger/V Skill selection, JB was able to take game one 2-1, ending the final round with an amazing V Trigger into Critical Art from the corner.

Nephew was not done yet though, as he took both games two and three 2-0! With both teams tied 2-2, was Nephew about to pull a Punk and complete a reverse OCV? The final match against Kami would determine the night for both teams. Nephew took game one 2-0 in an extremely dominating fashion practically dancing all over Kami. Kami had unfortunately gone back to not consistently anti airing, allowing Nephew full control of the screen on the ground and in the air. It all came down to this and Nephew was able to bait an EX Mad Cradle from Kami in round two taking the second game 2-0.

It was an absolutely outstanding performance from Nephew, yet so unfortunate for UYU. Just when victory seemed within their grasp, they were unable to make it to the finish line. While Alpha 3 got lucky this week, they cannot afford to be as cavalier in the coming weeks of Street Fighter League. Every match becomes more and more important as the weeks wind down, and if it comes down to tie breakers, these are the types of matches that can make or break a team getting into the playoffs. 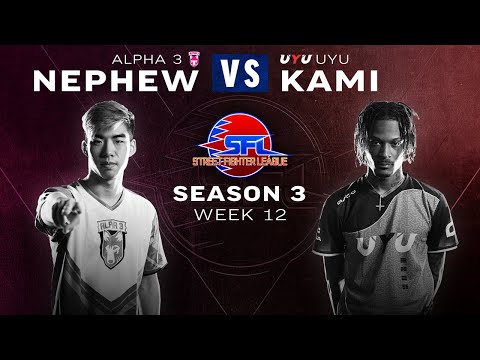 Next up was Dynamite versus NASR and Dynamite decided to ban Rashid targeting the Birds. NASR decided to ban Cammy targeting Gamerbee. It was a little surprising that NASR did not pick Sakura to help combat MenaRD considering how well he has performed with her during the past few weeks of Street Fighter League. The first match was Big Bird’s G versus Gamerbee’s Seth. This first match was a back and forth knock down, drag out brawl as Big Bird won game one 2-0, followed by Gamerbee taking game two 2-0. In the final game Big Bird was able to win 2-0 over Gamerbee. These were amazing performances from both players and put NASR up on the board for the night.

The second match was Angry Bird’s Seth versus MenaRD’s Abigail. Mena was able to take game one with his surprise Abigail pick taking Angry Bird for a loop. All the while further showcasing his incredible character versatility, even getting a perfect in round one. Angry Bird was able to take game two 2-1 as he quickly adjusted to Mena’s incredible pressure with Abigail. Mena then missed a V Trigger 2 near the end of the match, and Angry Bird missed the Mad Cradle that was supposed to punish it Luckily for Angry Bird though he was able to land in time and punish Mena to take the round.

Mena started off the third game with another prefect in round one, but Angry Bird was able to come back and take the entire set 2-1. Angry Bird ended the match by interrupting Abigail’s EX Giant Flip with an EX Mad Cradle in V Trigger for the extension and the last hit was able to kill. At the end of the night, it all came down to Street Fighter League veteran Samurai’s legendary Akuma versus Smug’s legendary Balrog. Before the match began, Angry Bird told Samurai to “play how he wanted” as he had two teammates behind him ready to go. It seems that hearing this truly allowed Samurai to let the demon out. 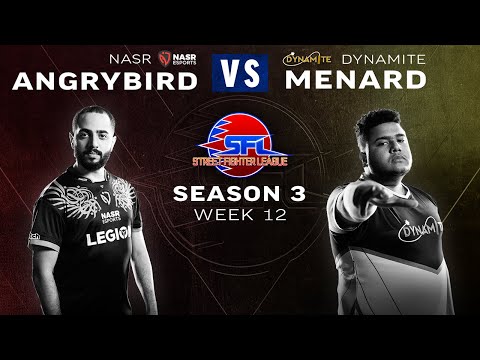 Samurai took game one 2-0, ending the set with a Raging Demon finish prompting Angry Bird to stand up and show his back, reflecting Akuma’s iconic pose. NASR was in the zone, and Dynamite had every reason to be worried. Smug was able to bring it back though and take game two 2-1. Smug was able to push Samurai from one end of the screen to the other with a relentless block string in V Trigger trying to rack up chip damage. Despite that, Samurai was then able to punish with a normal into Critical Art to take the second round.

Smug was still able to bring it back though and take game two 2-1. It all came down to this — NASR and Samurai on match point with Smug fighting for the lives of team Dynamite. Unfortunately for Smug and Dynamite, Samurai was able to take game three 2-0, despite each round going down to the wire. NASR wins the night with an incredibly impressive 3-0 against Dynamite.

After week 12 Dynamite is now in fourth place with a record of 4-4. NASR now shoots up to second with a record of 5-3. All-In moves down again to 3rd after NASR’s win, also with a record of 5-3, which further highlights how important these tiebreaker matches can be. Alpha 3 still remains in first with an almost flawless 7-1 record, their only loss coming from their first week. Sadly for UYU, they continue to remain winless with a record of 0-8. The best they can hope for at this point in Street Fighter League is to mess up some tie breakers, and, as Kami put it in his pre game interview with RobTV, “take everyone to the Shadow Realm.” 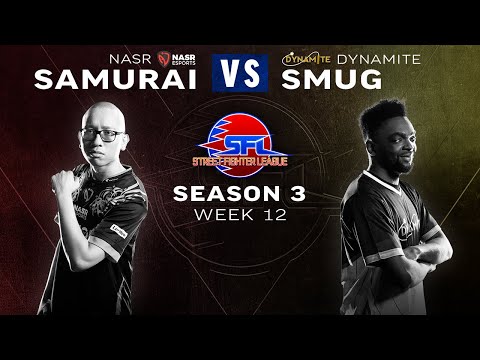 Every match matters from this point forward

Week 13 of Street Fighter League will take place next Thursday on January 21, with Psycho Shinobi versus UYU and All-In versus Dynamite. All-In versus Dynamite might be one of the most important matches this season, as the winner will greatly affect who stays in the running for the playoffs. Every match will be of the highest importance to both teams. You can catch it on the Capcom Fighters’ YouTube and Twitch channels at 7 PM ET.