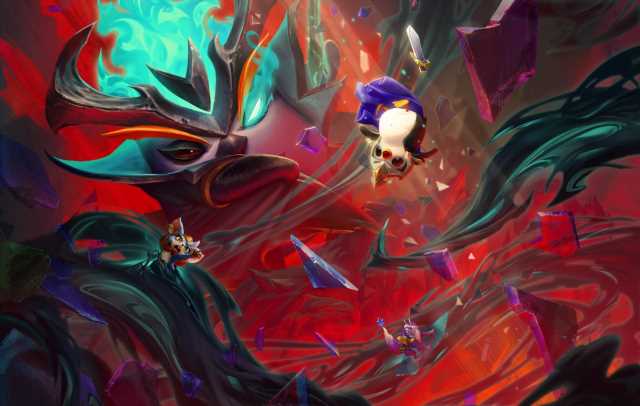 Teamfight Tactics Reckoning is right around the corner, in fact it’s just days away. The latest TFT set releases on the Public Beta Environment on Tuesday, April 13. The set will bring 58 champions to duke it out in the battle of good vs. evil.  Just like with any set, some new traits will likely become smash hits with the TFT Reckoning player base. We got a chance to playtest the new set and give our first impressions on what the coolest new traits are in TFT Reckoning.

Coven is one of the coolest designed TFT Reckoning traits

Throughout the history of TFT, the design of certain traits hasn’t really urged specific positioning. It’s been pretty straight forward, with units containing tank traits in the front or dps traits in the back. Usually, when a champion goes against this method, it’s because of their ability or items, not necessarily their trait. There have been exceptions like Keepers and Rebel, but when it comes to rewarding unique positioning, Coven is up there as one of the best designed traits of all time.

This trait fulfils the raid-boss-hyper-carry fantasy perfectly. Hyper carries are a main part of TFT and players are always trying to make their raid boss a little bit stronger. The Coven trait does a perfect job in that regard. When it comes to positioning, the Coven trait rewards big time when it comes to wonky positioning. Thankfully, Leblanc being a back line jumping assassin alleviates some of the fear of front lining fragile champions for the sake of the Coven Leader. Morgana’s ability also rewards front lining, thanks to her Soul Shackles stunning threats.

Abomination is like if Mech-Pilots and Cultists had a baby

One of the more popular fantasies to come out of recent TFT sets has been the notion of “making a big minion super strong.” Although Coven does that to a degree already, Abomination takes the raid boss fantasy in a different direction.

The abomination trait works differently. On the map, there’s a gravestone that passively sits on one side of the arena, on the Abomination player side. This gravestone appears when a player has the trait online. Once it’s online during a fight when three Abomination champions die, a huge Frankenstein Sion pops out and rushes the furthest enemy champion, knocking them up and doing damage. The “monstrosity” has crazy attack speed and gets bonus health and attack damage based on the number of Abomination champions the player had. Sound familiar?

The mech pilot part comes from the second portion of the trait. At the start of the round, the three closest Abomination units to the gravestone throw a random copy of one of their items into the pit. When the “monstrosity” awakens from its grave, not only does it have the bonus damage and health, it also applies the effects of those items.

It’s unknown which combination of items will be good as of now. Will it be big damage items? Will it be sturdy tank items? A mix of both? The meta will sort itself out, but thanks to the 90 different items in TFT now present with the Shadow item mechanic, the Abomination trait will surely make TFT fans happy to play.

Players will get a chance to play these traits and more for themselves once Teamfight Tactics Reckoning releases.