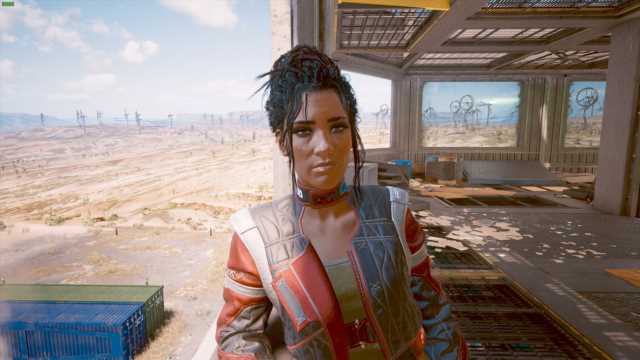 With a Little Help from My Friends is the second major side quest you’ll complete for Panam Palmer in Cyberpunk 2077. The first was Riders on the Storm and is a requirement for starting the next quest. If you’ve completed that, then you’re all set to take on Panam’s next wild adventure. Shortly following Riders on the Storm, the former Nomad will call you asking for help with a situation involving Saul. The leader of the Aldecaldo clan is making a decision that Panam doesn’t agree with and needs your help to change his mind. Here’s how to complete With a Little Help from My Friends in Cyberpunk 2077.

After the completion of Riders on the Storm, Panam will call you around 12 hours later. This is in-game time, so if you want the quest sooner, just skip one day ahead. Once you receive the call, you’ll learn that Panam needs you to drive out to the Aldecaldo camp to help mediate a dispute with Saul.

Upon reaching the camp, Panam and Saul will be in the middle of a spat. Basically, Saul wants to complete a deal with the Biotechnica corp and Panam doesn’t agree with this. Instead, she wants to go after The Basilisk, a piece of Militech technology that would help the clan.

Of course, Saul doesn’t agree, but that doesn’t stop Panam from doing the job anyway. When prompted, ride with her to the train yard where you’ll have to climb a control tower. Use level 3 Technical Ability to gain access to the door.

Once you gain access, head to the top and Panam will eventually ask you to find a punch card. You can find the card in a desk drawer on the floor surrounded by some papers. Put the card into the slot, and then talk to Panam by the window.

If you wish to romance her, choose the dialogue options that make the most sense. The two most important dialogue choices are “Missed you” and “[Touch Panam’s Hand] Next time, try following that impulse.” Keep in mind that you need to be a male for this to work.

Back down on the ground, you’ll have to once again choose some romantic dialogue options. The most important one to pick is at the end of the conversation, which reads “[Scooch closer] Gotten kinda cold.”

After spending a night by a fire, you’ll wake up and need to follow a train to intercept the Militech convoy. Once the train accomplishes its job, defeat all 12 Militech enemies and then hop into Panam’s truck. She’ll take you back to the Aldecaldo camp, where Saul will be waiting and pretty livid.

The conversation that ensues doesn’t really involve you, so sit back and watch Saul and Panam squabble. However, once they finish, the side quest is complete.

That’s how to complete With a Little Help from My Friends — make sure to stay tuned to Daily Esports for more Cyberpunk 2077 guides and news.