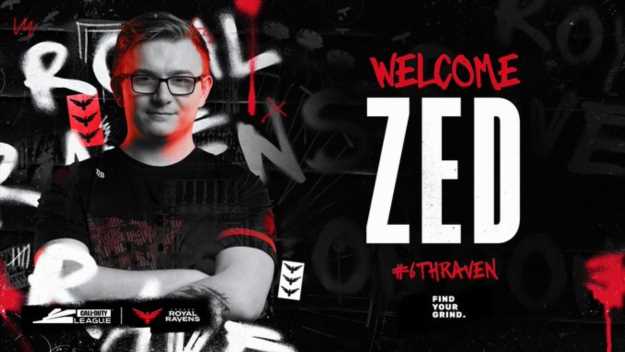 Zach “Zed” Denyer will play in this week’s Call of Duty League Major for Alex “Alexx” Carpenter on the London Royal Ravens.

The London Royal Ravens have struggled to gain their footing in recent matches of the Call of Duty League. They are currently 0-5 in the standings and will start the Major in the elimination round against Toronto Ultra. London is the only team out of the twelve that has yet to win a match, and overall it has not looked good.

According to London’s Twitter post, Alexx will be sitting this Major out due to personal family matters. These personal issues have forced Alexx to travel back to the United Kingdom. With COVID-19 and restrictions with travel, Alexx may not return to the roster for some time. This isn’t London’s first roster change either; Trei “Zer0” Morris has yet to play with the roster. Zer0 is currently still stuck in England due to visa issues. Christopher “Parasite” Duarte, a previous Challenger player, has been filling in for him until he can make it to the US.

Can Zed help London make a run at the Major?

Zed previously played for the unsuccessful Paris Legion during the inaugural season of the league. Before the Call of Duty League, Zed played for European teams like Team Reciprocity and Excel Esports. Team Reciprocity had an average placement at most tournaments for the Call of Duty World League. Their most notable placement was at CWL Fort Worth in 2019, when they placed third overall and gained $50,000 in prize money.

The London Royal Ravens are currently at square one in terms of process and can only go up from here. Zed’s addition to the team could be exactly what London needs to get going, especially at the first Major. With Zed’s five-plus years of experience in competitive Call of Duty, he will be a much needed boost to the team’s morale. There is also the potential for Zed to stay with London if they perform well during the tournament. He could potentially fill in for Alexx or Parasite full-time if he brings back his dominant form from Team Reciprocity.