Horizon Blockchain Games is an unwieldy name for a studio, but it’s important to the studio founders to keep the word “blockchain” right there, front and center. The Toronto-based studio’s original offerings are very simple on the surface: a trading card game called SkyWeaver, made up of colorful fantasy environments and creative cards meant to perplex your opponent, and a platform for indie developer games called Arcadeum.

The question is whether that offering is strong enough to sell the rest of Horizon’s extensive ambitions.

Horizon has raised $3.75 million from investors, led by Reddit co-founder Alexis Ohanian’s venture fund, Initialized. The studio’s first title, SkyWeaver, is being launched alongside development on the Arcadeum, a platform for other indie developers to launch their own games.

SkyWeaver and Arcadeum work with and are united by blockchain technology. Horizon’s goal is to have this system be so effective and encompassing that it can continue to grow and expand, but not so prevalent or prominent that it becomes a confusing deterrent for new players.

Ethereum is a technology similar to Bitcoin that is programmable to create custom currencies. While Arcadeum or SkyWeaver will be accessible from a browser or mobile device, everything is cross-platform and tied to a unique address for each user. From there, users can trade, communicate, and play. Trading is an essential part of Horizon’s planned ecosystem, especially because a trade can vary from items within a game to the entire game itself.

Co-founder and CEO Peter Kieltyka acknowledges there’s a lot of “mumbo jumbo” when it comes to talking about blockchain, but stresses that it all comes down to one thing: a digital currency that starts with SkyWeaver, and will be an attempt to unite the multi-billion dollar gaming industry.

SkyWeaver is the first step that Horizon users take toward engaging in this ongoing ecosystem. The game looks like a Hearthstone or Gwent, but the team stresses that SkyWeaver is its own animal.

There are some key differences that are immediately apparent: There are no caps on resources; players can eventually collect a vast pool of energy from which they can play cards, allowing for big and dramatic turns. The Guard mechanic on minions only protects the player’s health pool, and not allied minions, giving players more options to deal with a board that the enemy player is controlling. All 350 (or so) cards will be in the available competitive pool at launch, creating a wide variety of potential deck combinations.

SkyWeaver is free to play, and players will be able to build their own decks for free. If they want to collect more cards from different categories to experiment with new decks, they can purchase those cards from other users. Horizon is aiming for each card to be about $1 apiece. Kieltyka estimates that building a top deck would not exceed $20, which is a better deal than some other big games in the genre.

Despite the emphasis on trading and a marketplace, SkyWeaver is built to be more accessible, with a lower skill floor, than a game like Valve’s recently failed experiment in Artifact. Cards will be given away for free to avoid artificial scarcity, and there will be no loot boxes or random chance in acquiring cards in SkyWeaver.

In short, Horizon is starting with an easily accessible browser and mobile game that riffs on a popular genre. That’s a potentially solid start, and if it takes off, Horizon intends to use blockchain to expand its business. 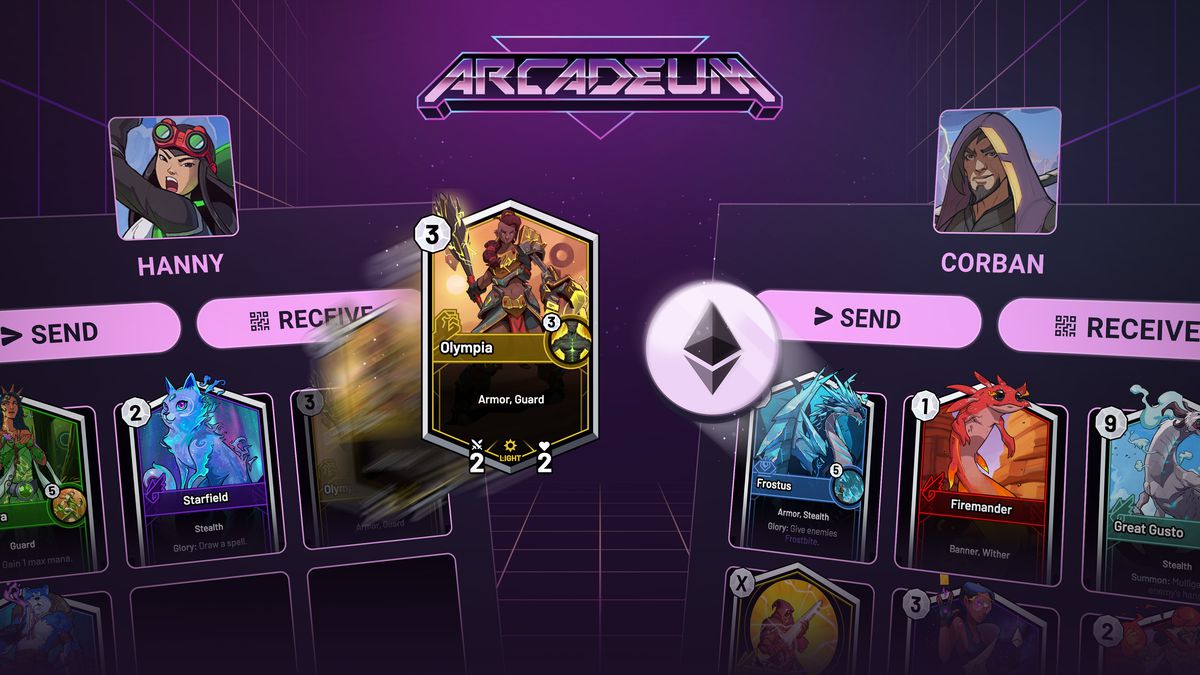 For people who play a wide selection of online games, their investment is spread thin over a wide range. Not only are cosmetic items divided by game and platform, but the price of each item can range wildly. There are League of Legends skins that go for $10 and Dota 2 skins that cost hundreds of dollars.

Different accounts have different values, as well. A Hearthstone account with all of the cards unlocked would cost more than an Overwatch account, as one account would significantly affect gameplay and another could only grant cosmetic unlocks.

An example of Horizon’s eventual goal can be found in the way that Blizzard’s Battle.net client works. In World of Warcraft, I can farm in-game gold, and then exchange that for a subscription token that is worth real-world currency. With that real-world currency on my account, I can purchase Overwatch loot boxes or a skin in Heroes of the Storm.

Horizon is looking to build a similar system from the ground up, with SkyWeaver and the Arcadeum as starting points for players to start building their collections. This crypto-currency could be a potent tool that streamers could use to interact with their viewer base, or players could exchange items among themselves. Even if individual players had their own game of choice, they would all share a similar currency thanks to Ethereum.

Before Horizon can achieve this kind of grand goal, it has to start with getting a platform at all. That’s going to be tricky; SkyWeaver is a totally new IP, even if it’s very recognizable to fans of Hearthstone or Magic: The Gathering. The Arcadeum allows a platform for other developers to publish their work, but there are no shortage of platforms in 2019, with the Epic Games Store, Apple, Stadia, Steam, and others all battling it out.

Horizon has its work cut out for it as it prepares to launch SkyWeaver. It needs to triumph against tough competition to prove its product deserves attention, time, and focus from players. If it manages to get its foot in the door, Horizon might be able to parlay that SkyWeaver success into the rest of its ambitions.