Hearthstone’s new expansion, Rise of Shadows, is centered around a world where a team of villains from previous Hearthstone adventures team up with the goal of taking down the magical city of Dalaran and everyone in it. Those villains have an army of minions at hand, among which is the neutral legendary card Batterhead. We sat down with Hearthstone designers to go over this new card, and how the team creates new legendaries that fit the theme and expectations of an expansion. 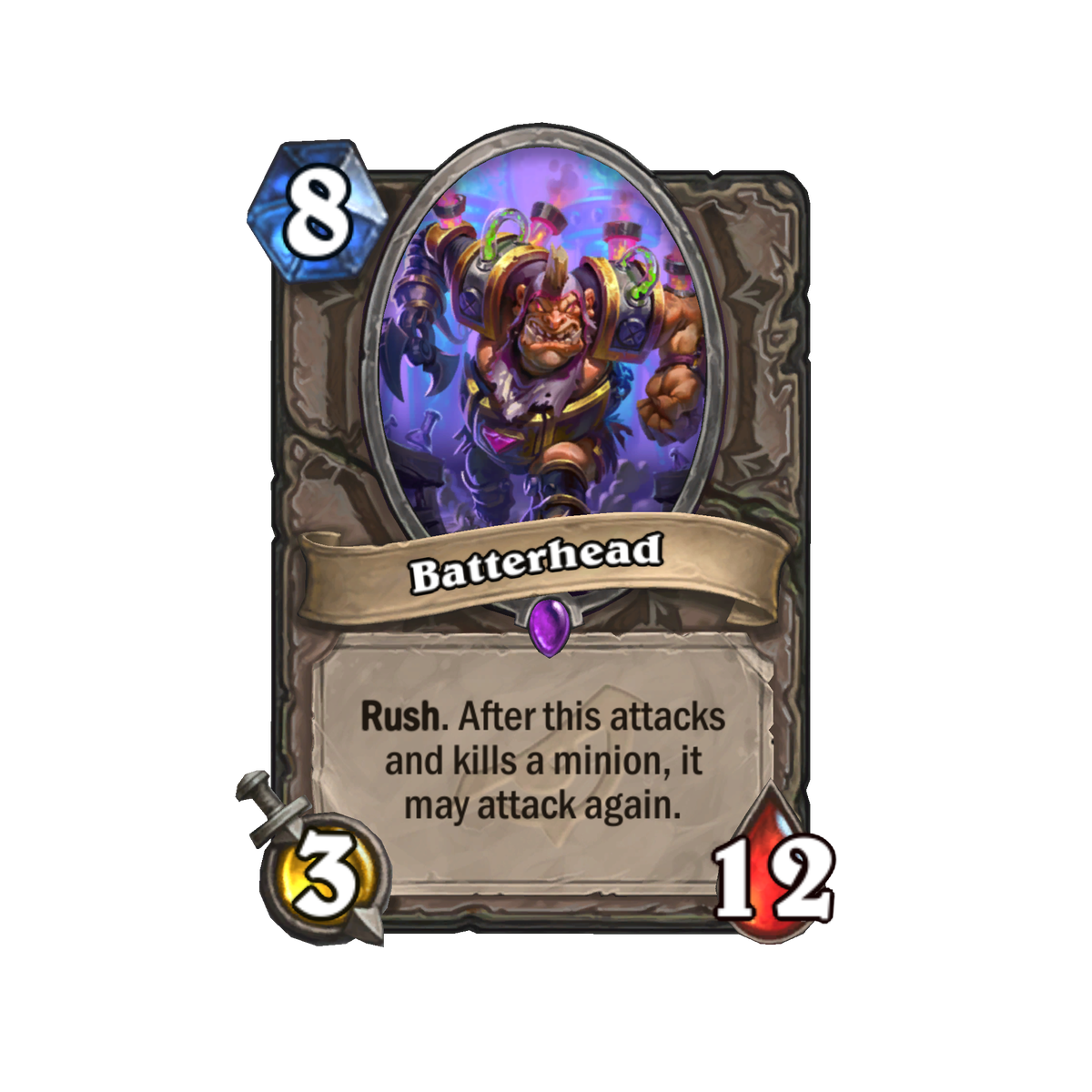 Batterhead is an 8 mana minion with 3 attack and 12 health. He has rush, meaning he can attack minions the turn he is placed on the board, and after Batterhead attacks and kills a minion, he may attack again.

“The initial idea for Batterhead is that he was one of the henchmen for the evil league,” says Stephen Chang, final designer at Blizzard. “He’s the muscle behind the operation. He’s not very smart, but he has a very thick head.”

Batterhead is meant to have an immediate impact when he hits the battlefield; he’s a way for control decks to turn the tide and clear the board. Because of interactions with cards like Spirit of the Rhino, Batterhead went through multiple iterations before he ended up in his final form. 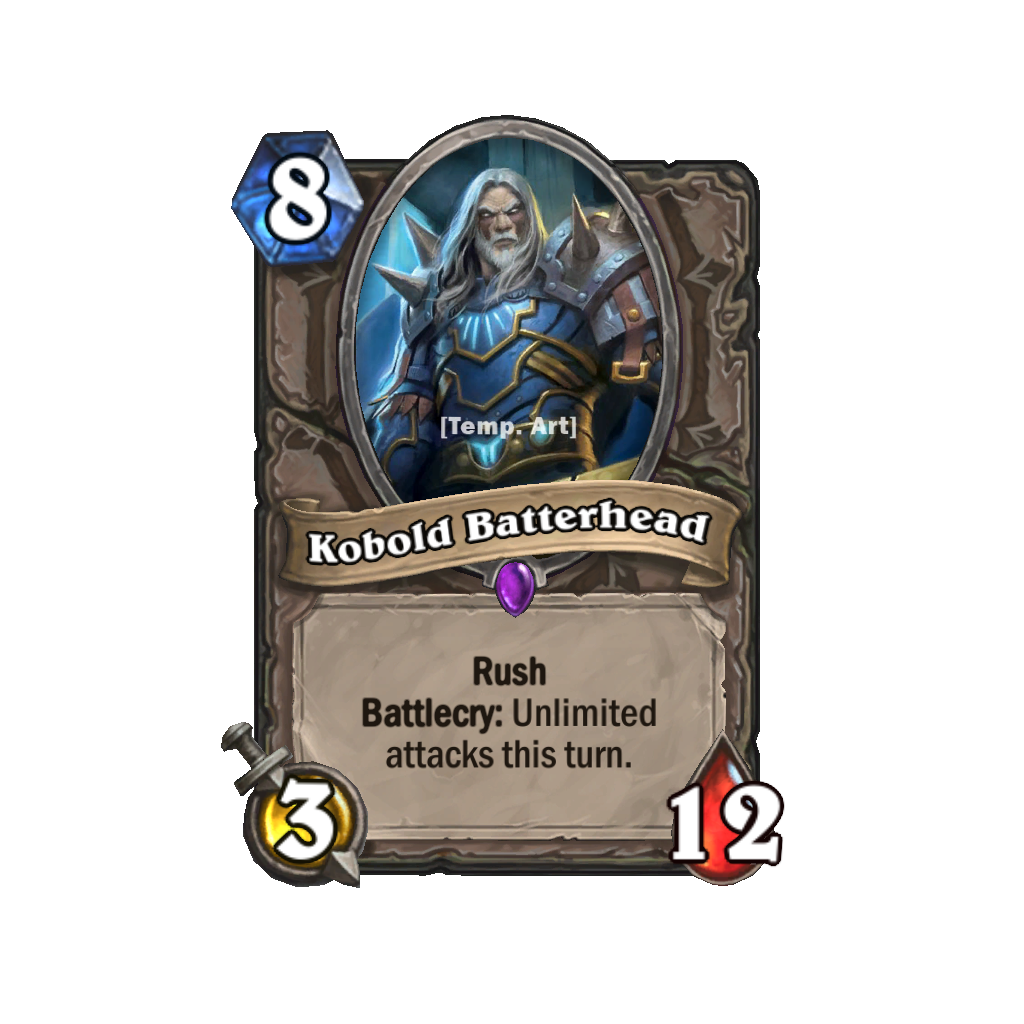 An original prototype of the minion who would be Battlehead.
Blizzard Entertainment

A second iteration of Batterhead gave him unlimited attacks against minions as soon as he was played. 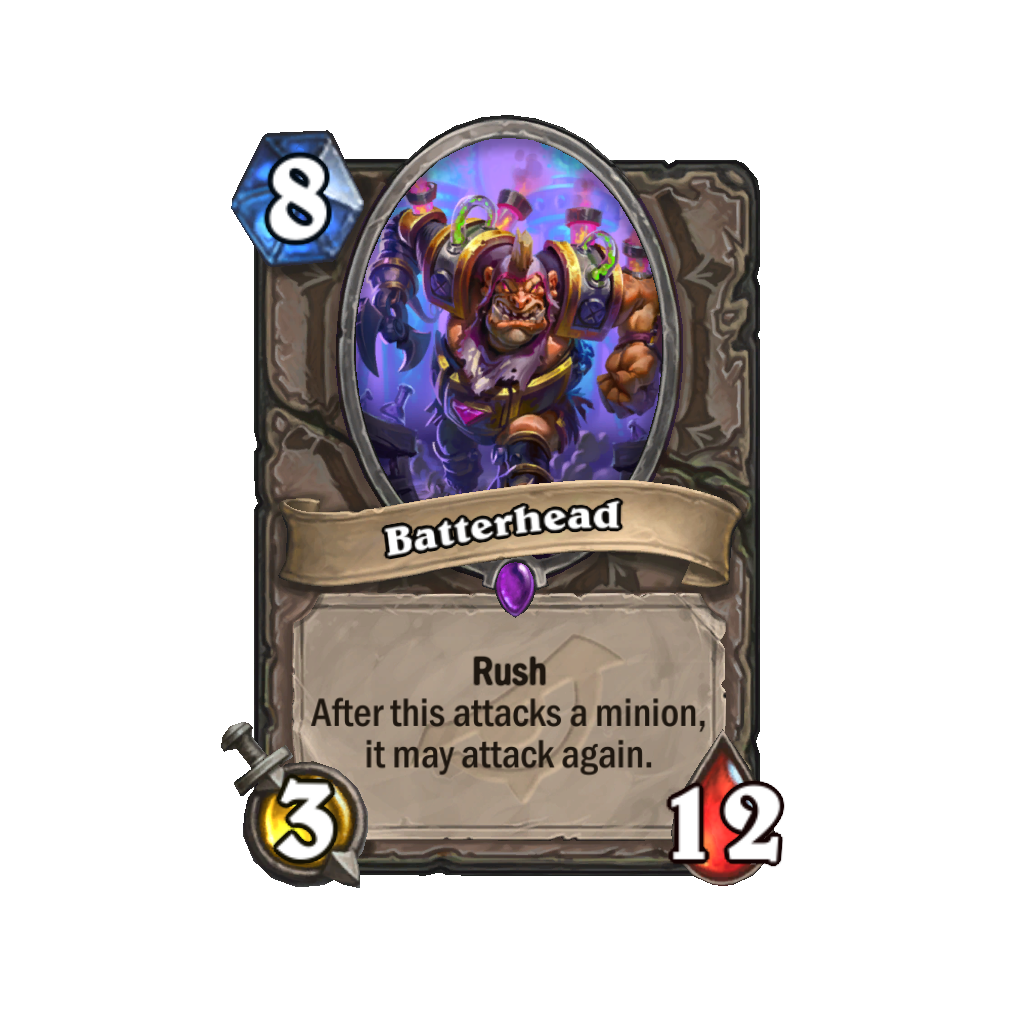 Not the final card — just a prototype of Batterhead.
Blizzard Entertainment

These iterations led to the final design of Batterhead. Cheng mentions that Batterhead will be replacing the Primordial Drake in the standard rotation, and the two cards fulfill similar purposes. “He creates cool gameplay elements in terms of trying to create the board state where you’re preparing to clear a lot of minions. It’s fun to combine him with buffs and build tempo.”

Warriors, druids, and priests are among the classes that will get the most use out of Batterhead, while decks that focus on early momentum and quick finishes will likely want to leave him behind.

“The way we work, our design team comes up with the theme of the set, and our team will jump in at some point early in development and spend a couple of weeks coming up with a style guide for the set,” says Tim Erskine, senior game producer at Blizzard Entertainment. “We figure out the big key theme beats — what does it mean to assemble a team of supervillains? All these characters have unique looks, but how do we unite them under a banner of supervillainy?”

From there, the team jams out visual concepts and design tenets. At one point, Dr. Boom was in a giant mech suit; that’s been changed to a jetpack. Hearthstone uses a design that Erskine describes as ‘chunky’. The team accomplishes this with broad, thick shapes and avoiding fine detail.

“What makes this character whimsical? What’s fun about these characters? How do we play those features up?”

With Batterhead, this manifests with a massive robo-arm, thick tubes pumping him full of mysterious chemicals, and a pose that puts his big noggin right in the center of the card. 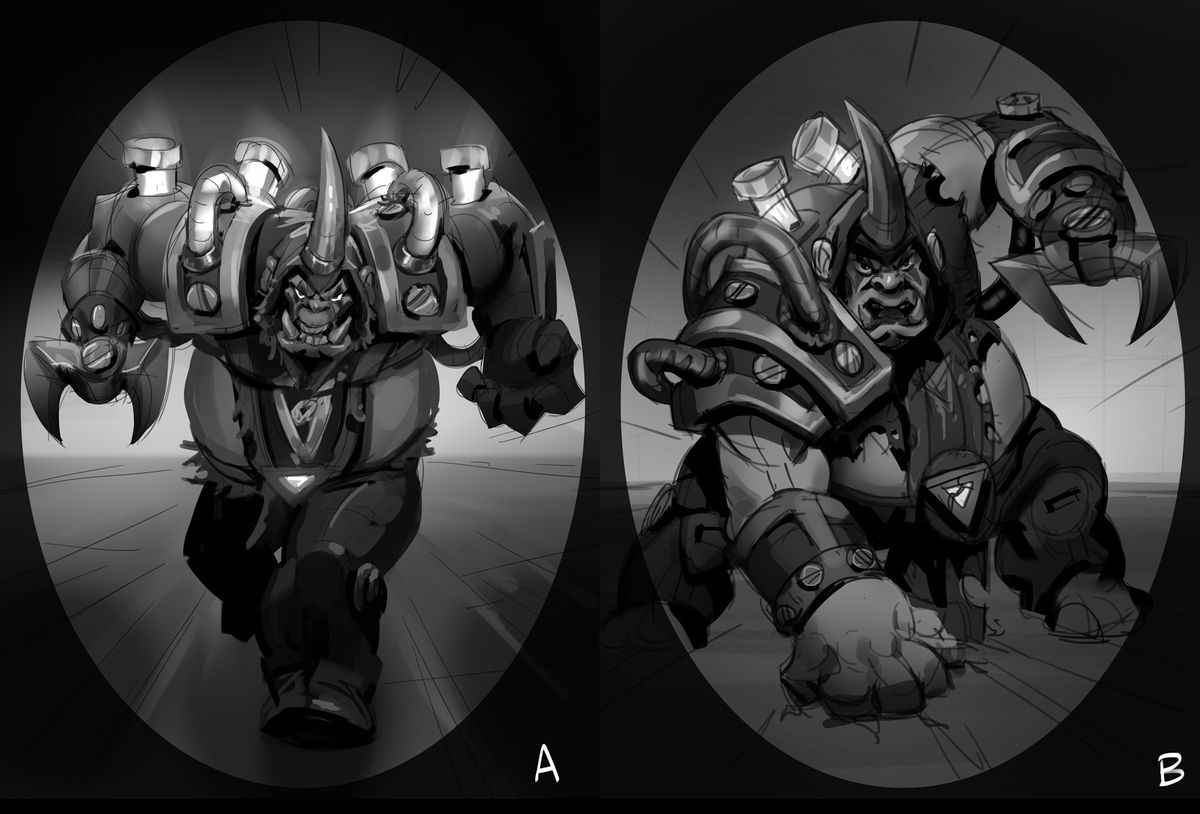 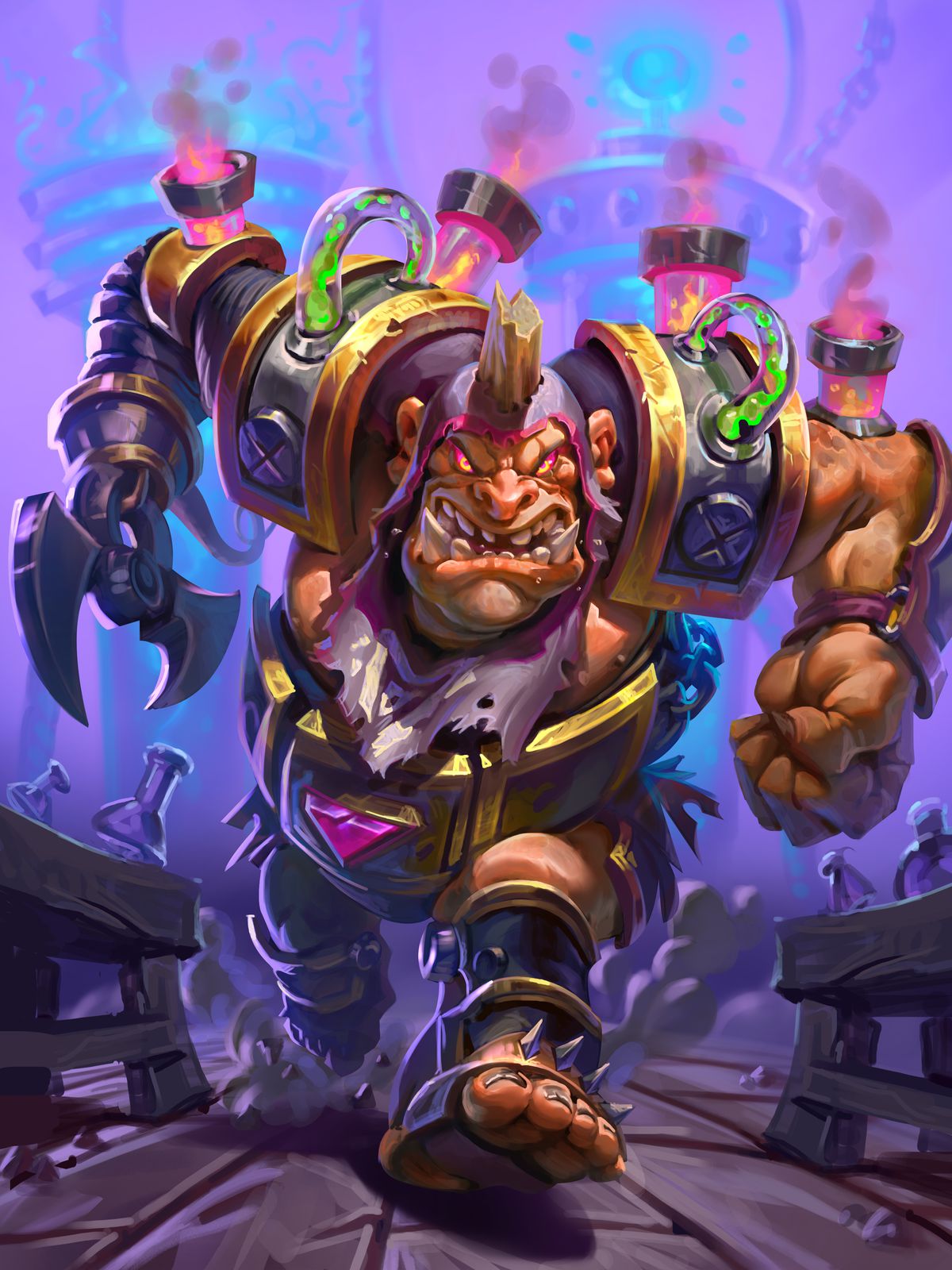 Rise of Shadows will be released on April 9, with new cards and a single-player campaign. It will be the first expansion of Hearthstone’s Year of the Dragon.