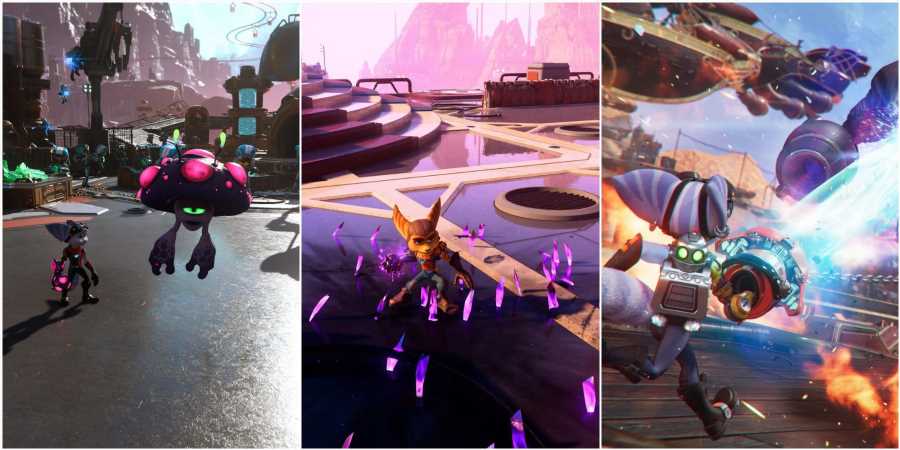 Weapons are the core foundation of any Ratchet and Clank game, which remains the case in Rift Apart. There are eighteen different weapons you can earn in the game, all of them being incredibly fun and unique in their own right. However, there are some that simply outshine others.

In Ratchet and Clank: Rift Apart, there are a handful of weapons that genuinely never get old, no matter how many times you use them. How enjoyable these guns are to use in Rift Apart makes you want to use every single one of them in each combat encounter, which is a testament to the game’s over-the-top, yet insanely fun gameplay. However, even with every weapon being exhilarating to use, some pale when compared to others, while others stand tall. 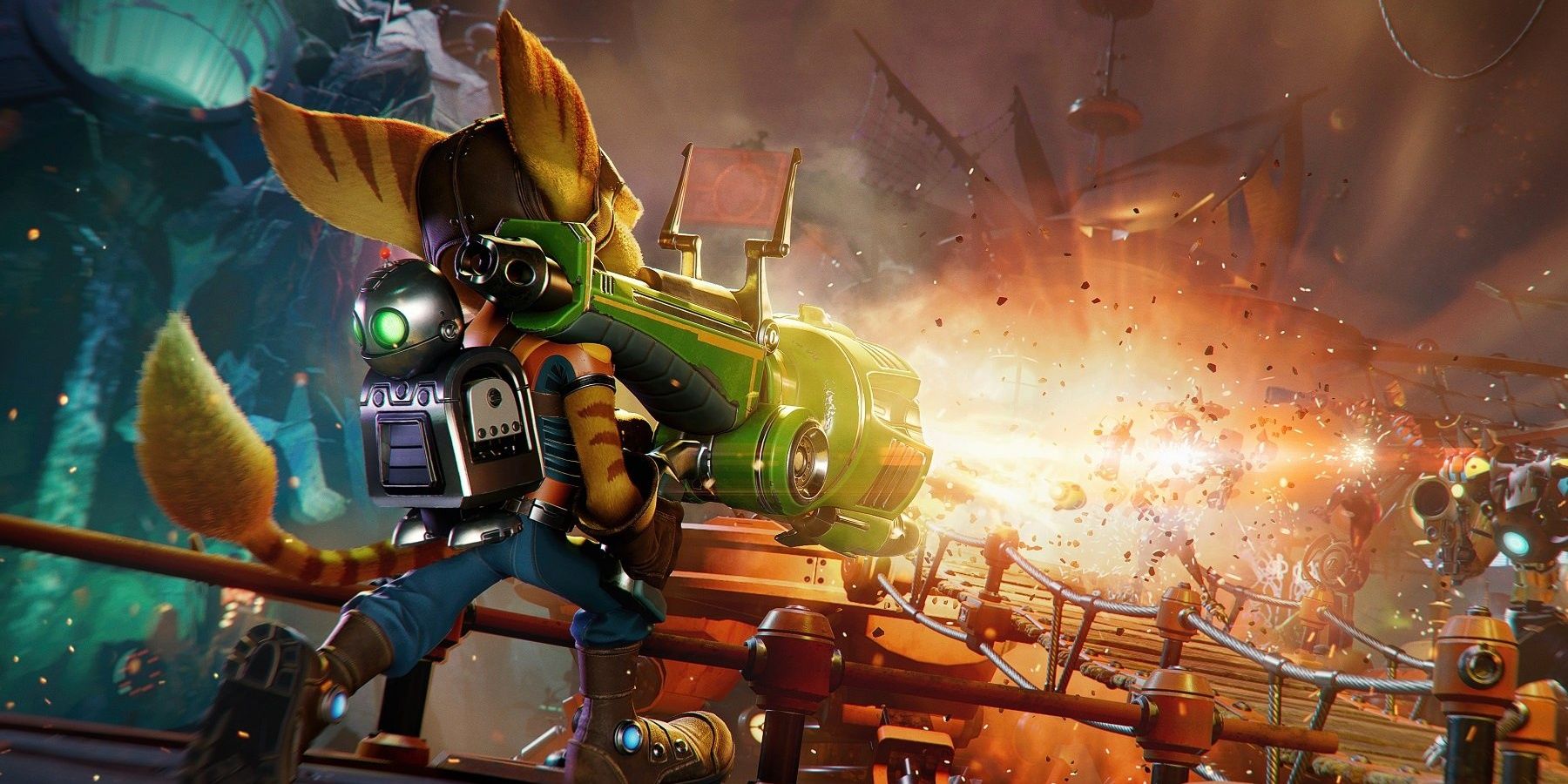 The Warmonger is one of the most powerful weapons in Ratchet and Clank: Rift Apart. However, it is more viable against the game’s many bosses than the standard enemies you will encounter, likely because you will not want to waste ammo on enemies you can dispatch with other weapons in your arsenal.

Still, the Warmonger is worth upgrading and worth being amongst the top ten simply because of its raw damage output. If the rocket launcher carried more ammo or had it readily available, the Warmonger would be better than many of the other weapons on this list. Alas, that isn’t the case, but it still stands above most guns in the game and packs a deadly punch. 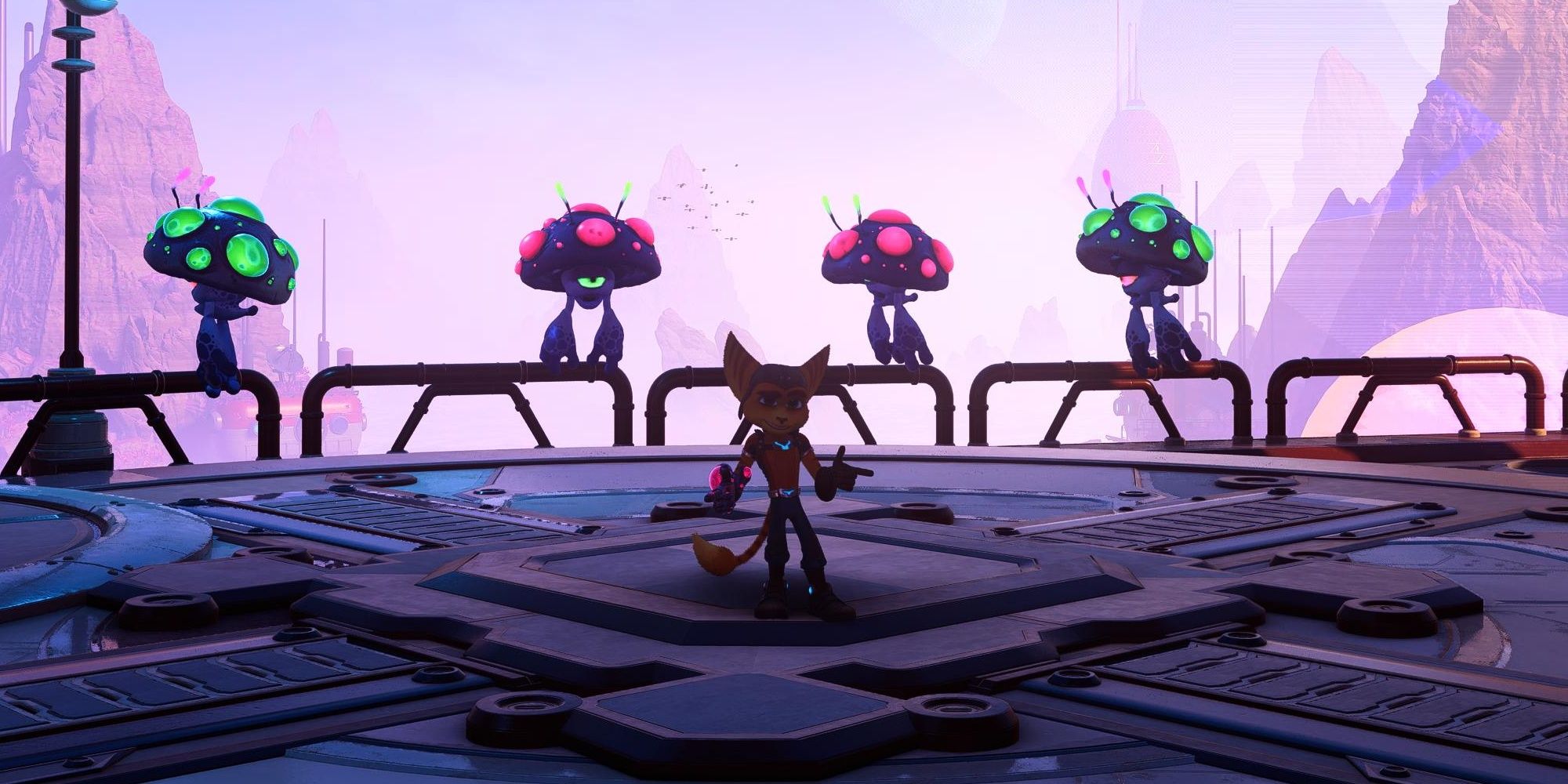 Mr. Fungi is a personal drone-type weapon and is a living, breathing mushroom that fires at enemies with his fingers. What makes Mr. Fungi such a great weapon is its ability to thin out hordes of smaller enemies with little to no effort. 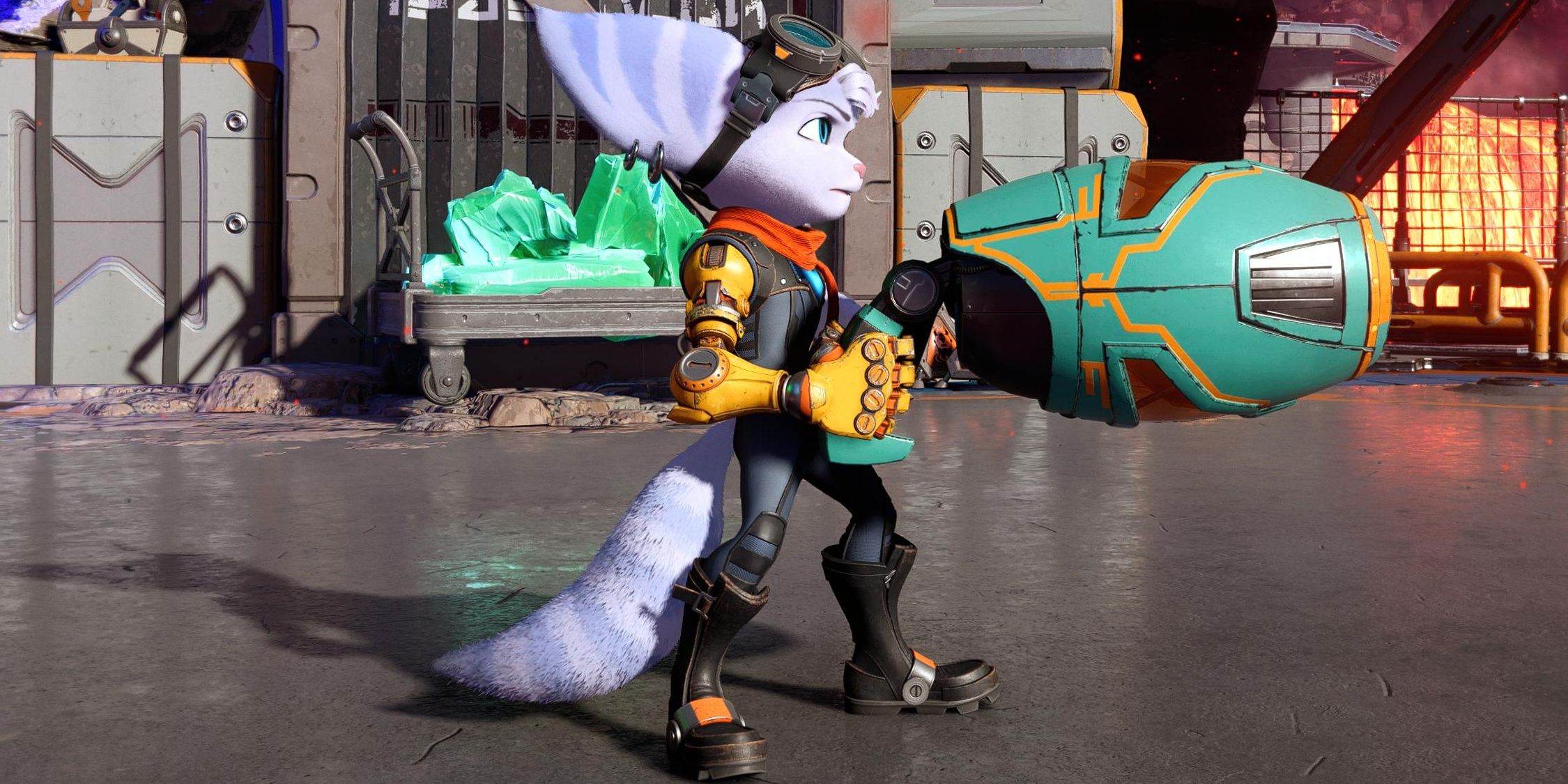 One of the best early and late-game guns in Rift Apart is the Ricochet, which allows you to fire out a deadly projectile and bounce it off multiple enemies. With each perfectly timed trigger pull, the shot will do additional damage and tear through your foes.

The one huge plus side of the Ricochet is that it only requires you to line up the first shot, allowing you to move around and focus on other things while timing the subsequent trigger pulls with the sound of the DualSense. However, the downside is you will not be able to swap weapons or do much of anything else damage-wise until the projectile gets done bouncing off of everything, making it a bit cumbersome. However, the damage is worth it, and the Ricochet is an excellent choice for waves of enemies and mini-bosses. 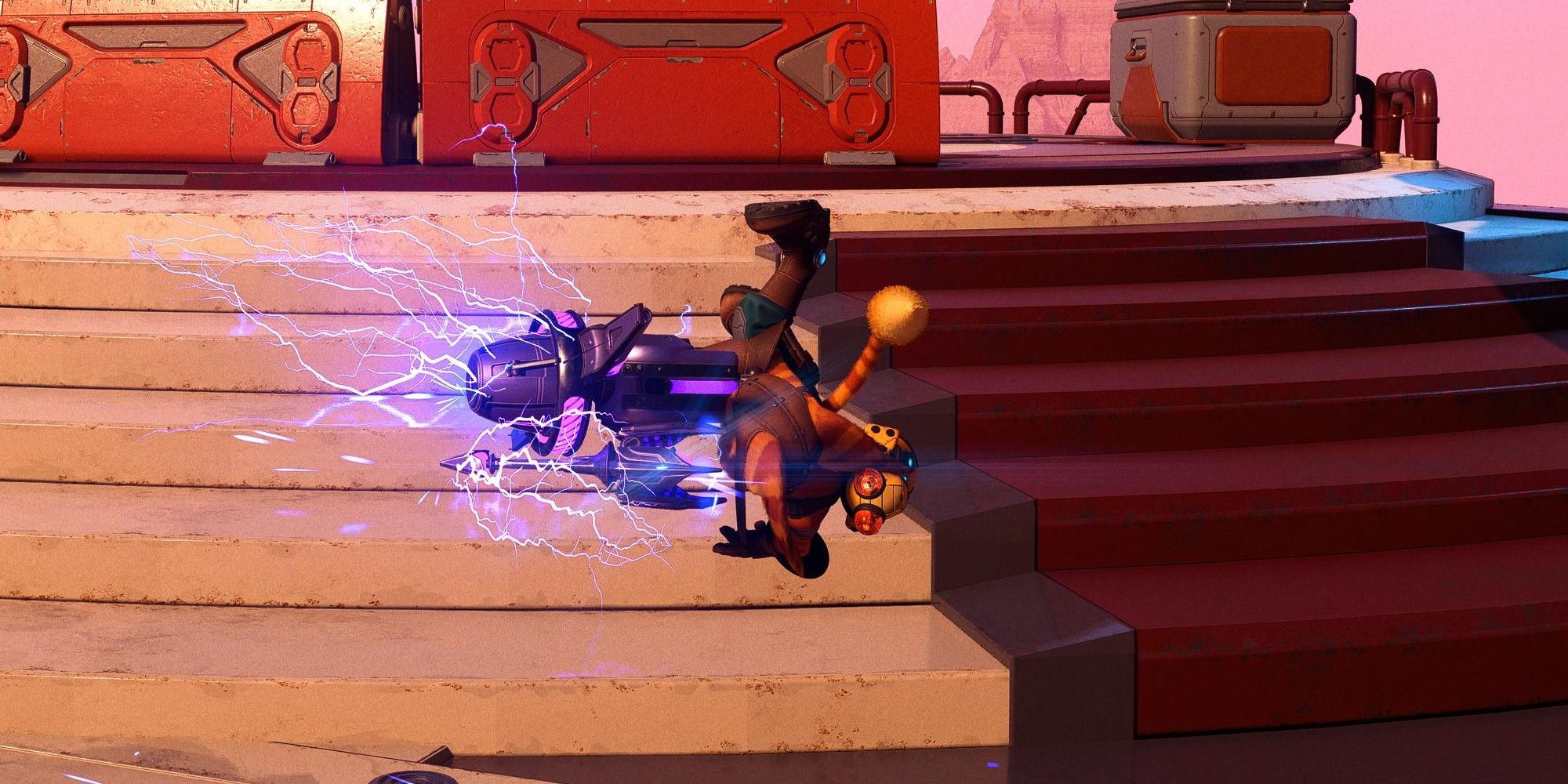 The Lightning Rod is one of the best weapons for groups of enemies as it has the potential to chain them together with its current and keep them stunned in place, allowing Ratchet or Rivet to either get in close for melee attacks or finish them off with their gun.

Additionally, when fully upgraded, the Lightning Rod is one of the more viable weapons for larger foes, making it useful at any stage of the game. Having the ability to encumber large groups of enemies and deal significant damage at the same time is a treat! 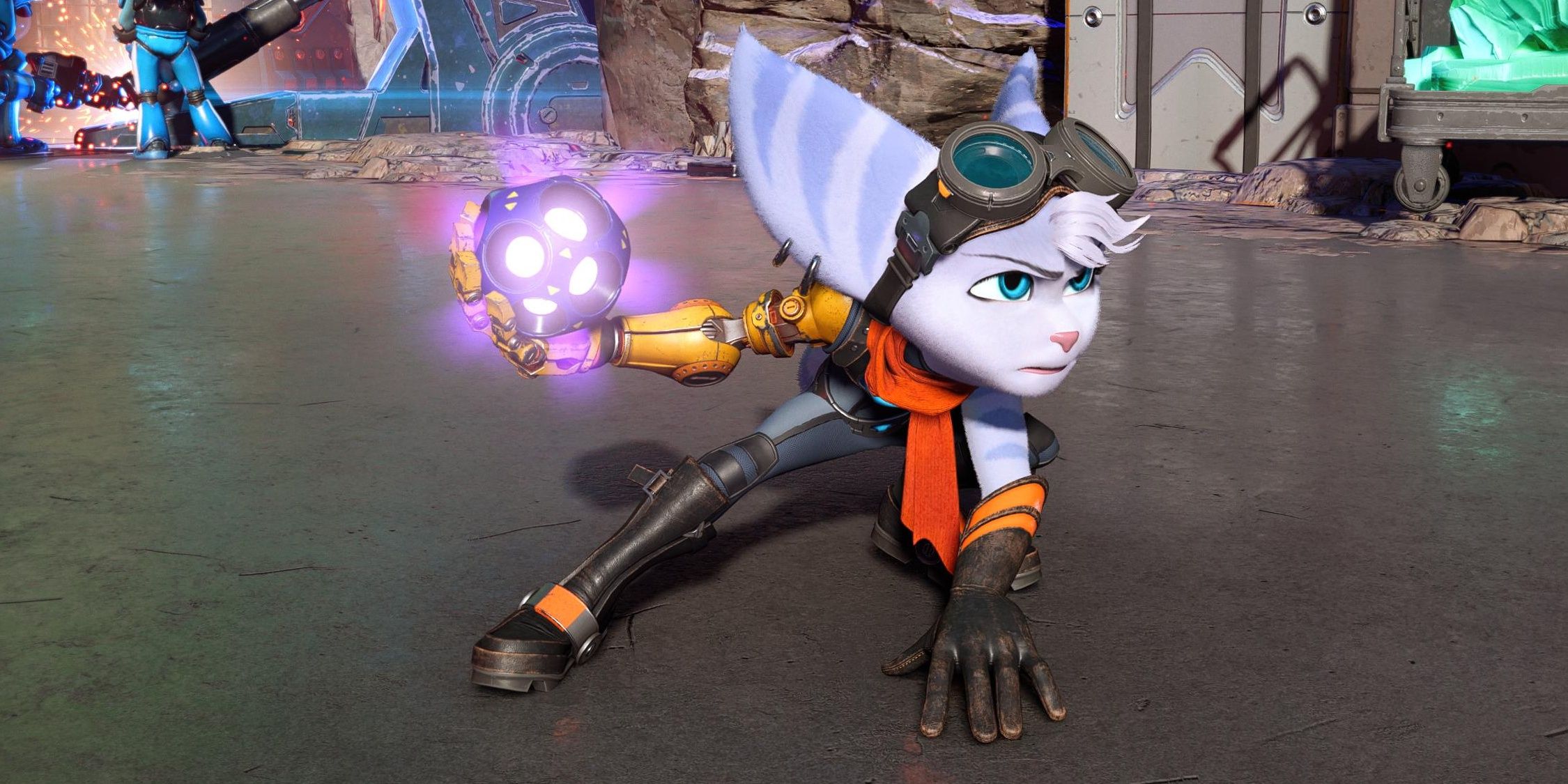 You will obtain the Shatterbomb early on in Ratchet and Clank: Rift Apart and it will be by your side to the bitter end of the game. The Shatterbomb is more or less a grenade that is not only great at crowd control but can also obliterate larger enemies as well.

With the Shatterbombs Second Shatter perk, each bomb will set off its own secondary exploding, leading to enormous chain damage and tearing through heavy enemies instantly and deleting crowds of smaller ones. Shatterbombs are viable from the beginning to the end of your journey, so take good care of them! 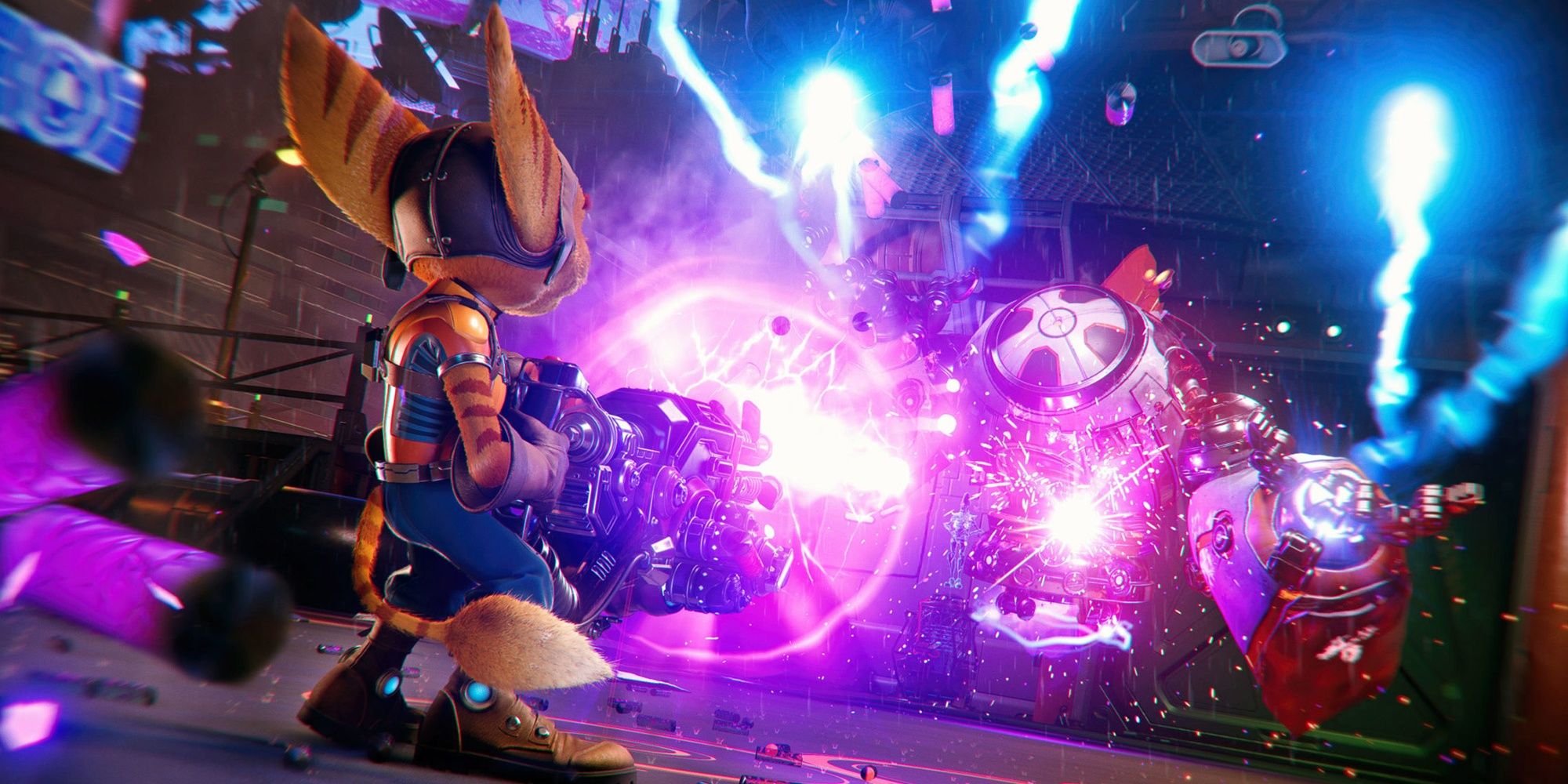 It isn’t often you will find a weapon so powerful in a Ratchet and Clank game that it needs its own cooldown mechanic, but the Blackhole Storm checks those boxes with confidence.

The Blackhole Storm is a Gatling Gun that will shred through any opposition that dares challenge it. Additionally, when at max level, the Blackhole Storm will have any enemy it defeats explode into a black hole, tearing through anything near it. This gun is no joke and delivers on its name! 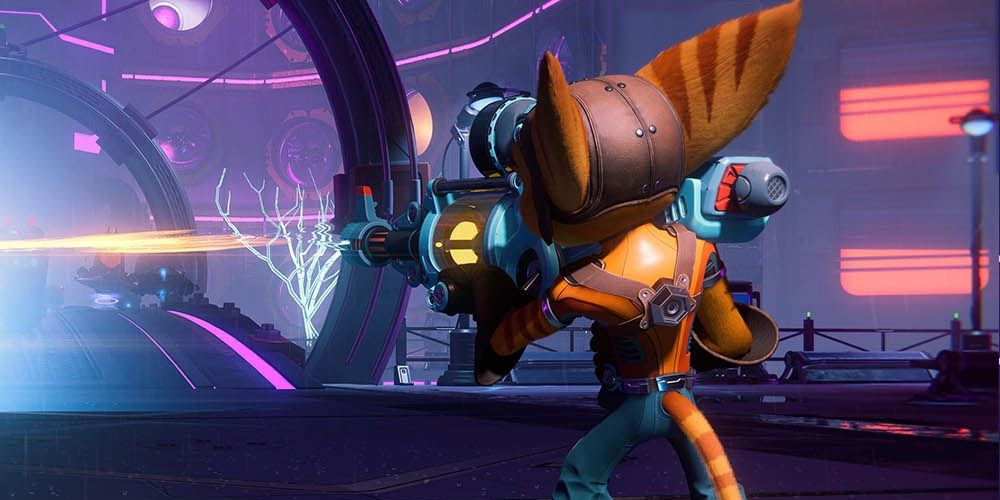 The Headhunter is amongst the more unique weapons in Rift Apart, only because it’s a precision-based gun that requires you to slow down and line up your shot. Fortunately, the Headhunter doesn’t feel clunky or wrong to use in any way and feels right at home with every other weapon in the game.

When aiming down the Headhunter’s scope, time will slow down, allowing you to focus and line up the headshot. No matter how formidable the foe, the Headhunter will tear through them if you hit them in the head, making it a late-game dream and a must-have weapon. 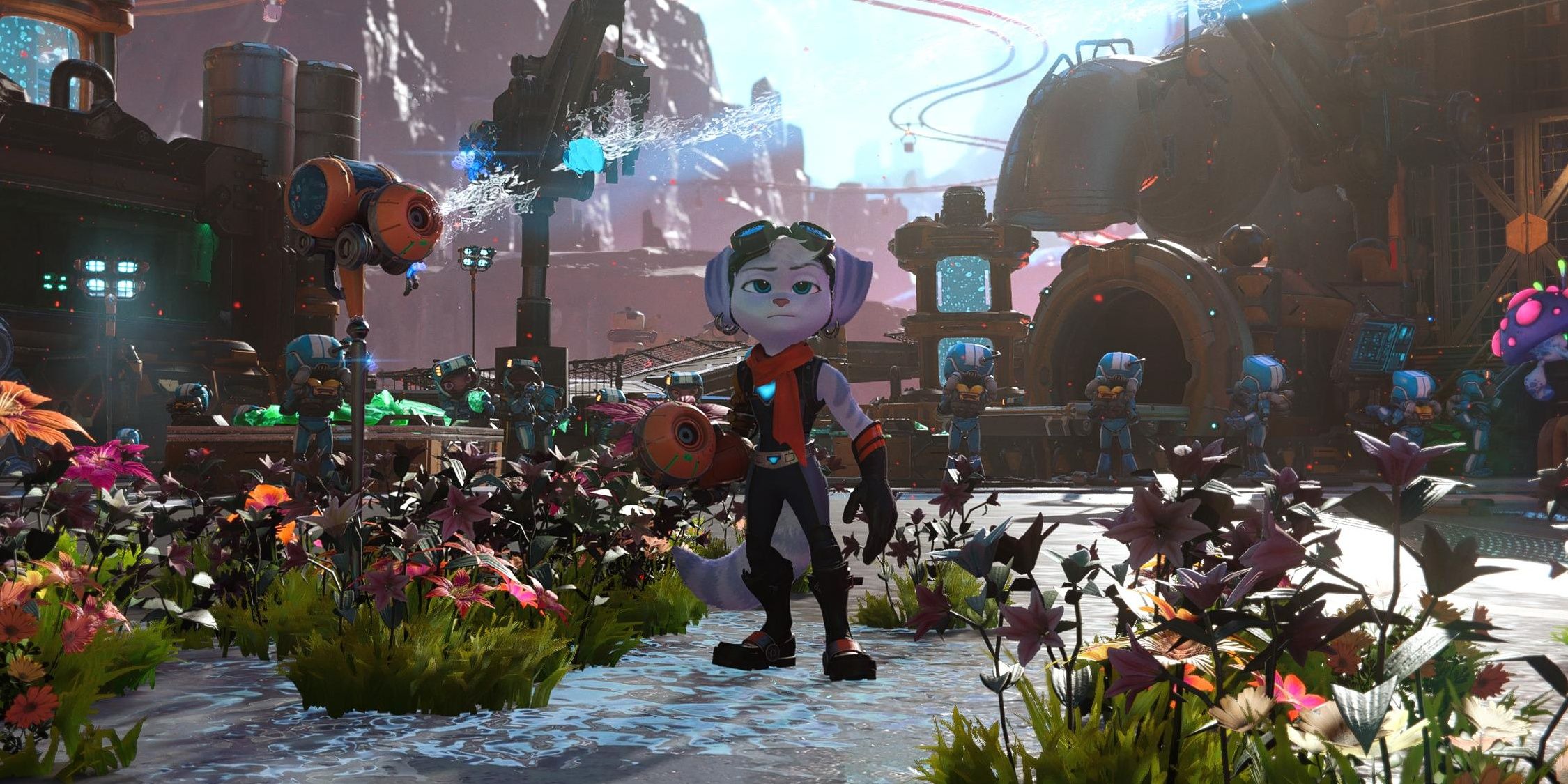 Perhaps one of the best inventions in Ratchet and Clank history is the Topiary Sprinker, which turns enemies into shrubs and flowers, freezing them into place.

The Topiary Sprinker is an all-time great weapon and is always satisfying to use. When upgraded, Ratchet and Rivet can deploy two Topiary Sprinklers at the same time, allowing for more enemies to get turned into plants, enabling you to get in close and deal tons of damage. The Topiary Sprinkler is so amazing; we want it to be in more games. 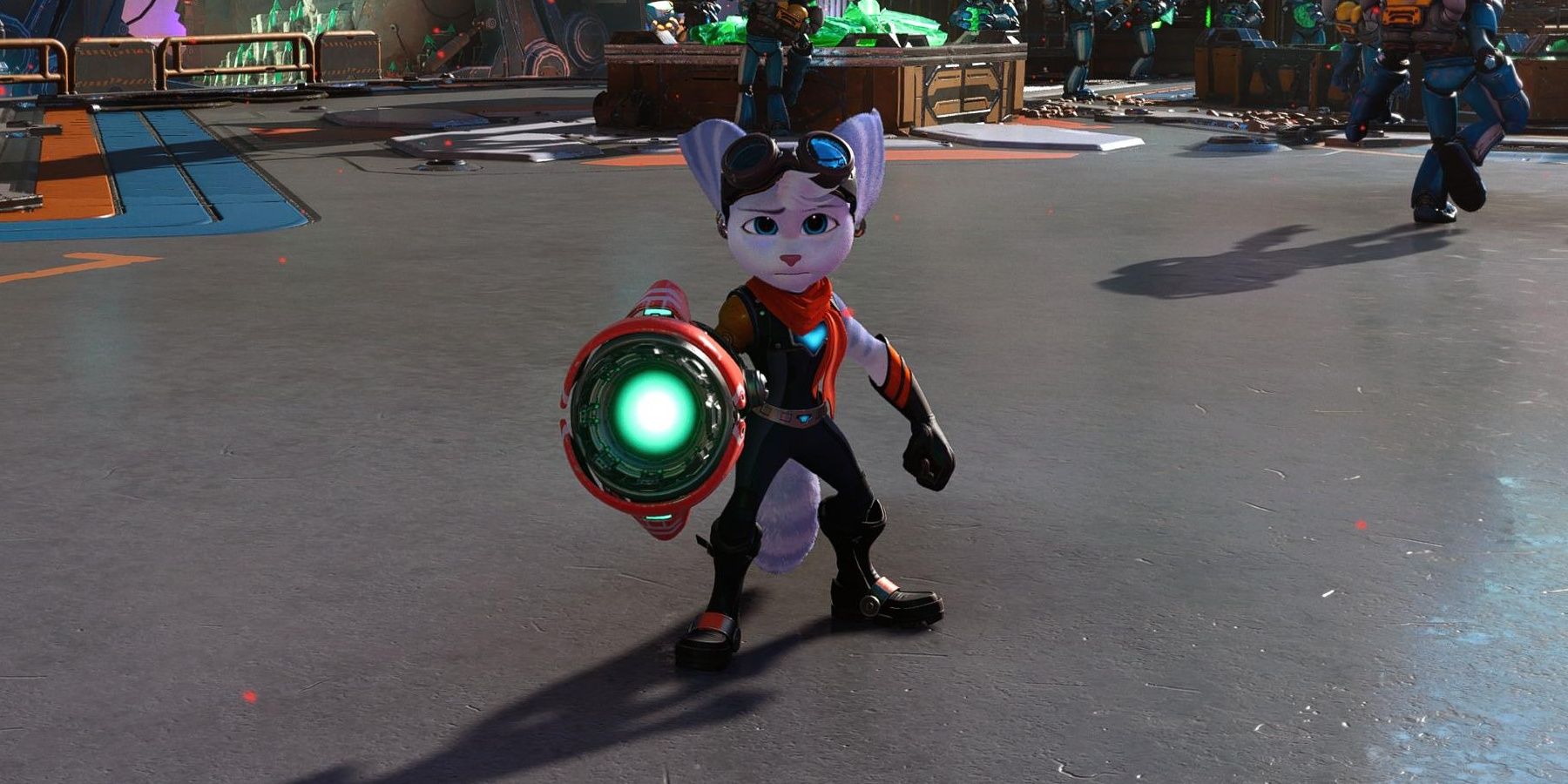 One of the more powerful weapons in Ratchet and Clank: Rift Apart is the Negatron Collider, which is obtainable reasonably early in the game.

What makes the Negatron Collider one of the best weapons in Rift Apart is its ability to demolish multiple enemies in the blink of an eye. Firing vast beams of energy, the Negatron Collider deals immense damage to any foe in its path. Additionally, this gun’s damage only gets more potent when hitting multiple baddies, which is what allows it to erase groups of enemies without breaking a sweat. The Negatron Collider is also great against bosses and the larger enemies! 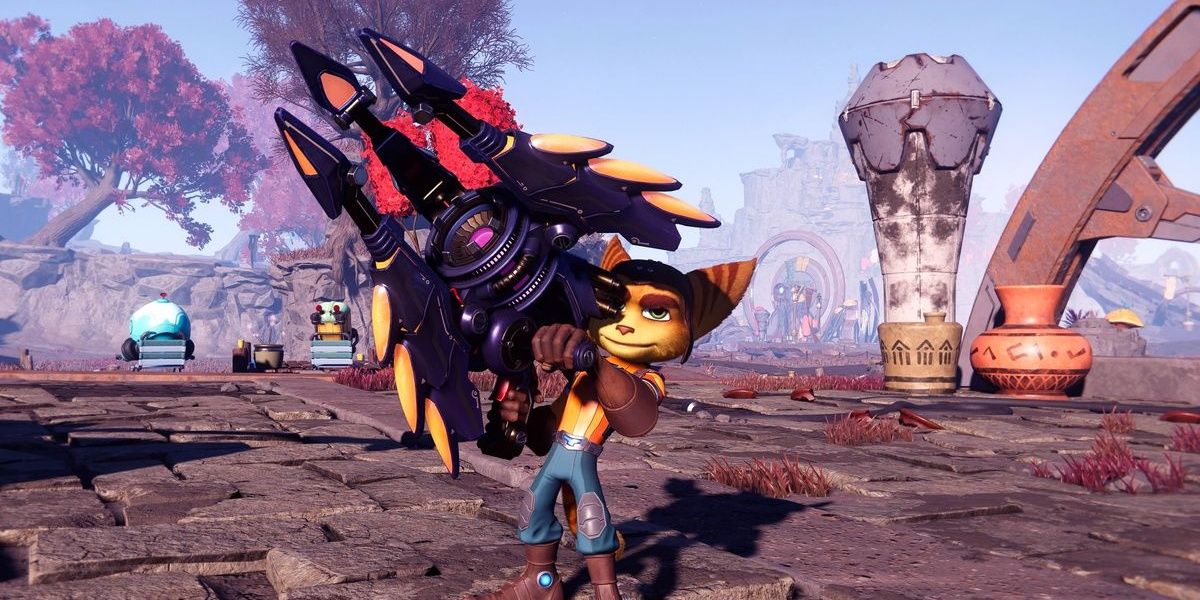 It would not be a Ratchet and Clank game without an RYNO making an appearance, and the RYNO 8 is something to behold.

While the RYNO 8 takes a decent amount of effort to obtain and has a prolonged rate of fire, it is more than worth it in the end. Offering unmatched damage, a massive area of effect, and a stunning display of pure chaos, the RYNO 8 will rip enemies a new one every single time, making it the best weapon in Rift Apart.