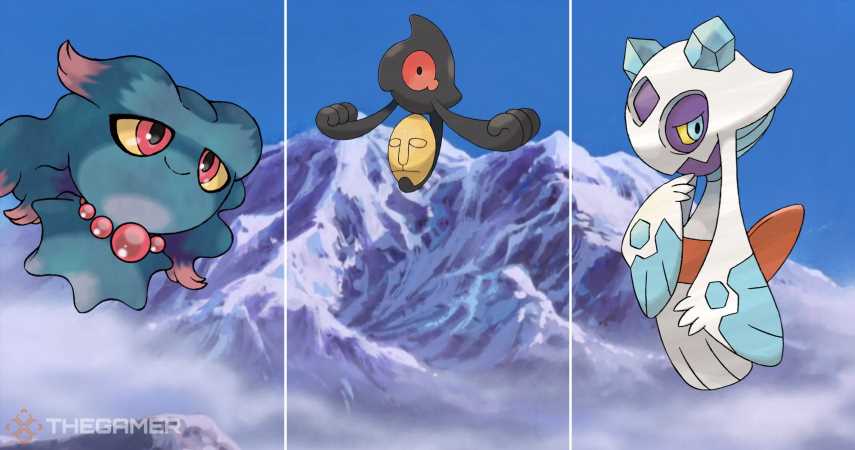 Ah yes, the vast world of Pokemon. As the count gets close to 900 total, Pokemon continues to produce new pocket monsters to encounter. The range is so vast that anything is on the table: electric charging bugs, anthropomorphic anchors, interdimensional beasts that can tear apart the fabric of time just because…you know, the usual.

Inspiration for these characters comes from everywhere and that influences the design and move sets that ultimately end up bolstering your star-studded team when you need a ghost type to rough stuff up. While some may look friendly, a lot of pokemon come from twisted lore that ends up reshaping how you see them once you learn about it.

And if it doesn’t reshape anything for you, it’s at least nice to acknowledge the research and development that went into the designs for one of the world’s most beloved gaming franchises of all time. 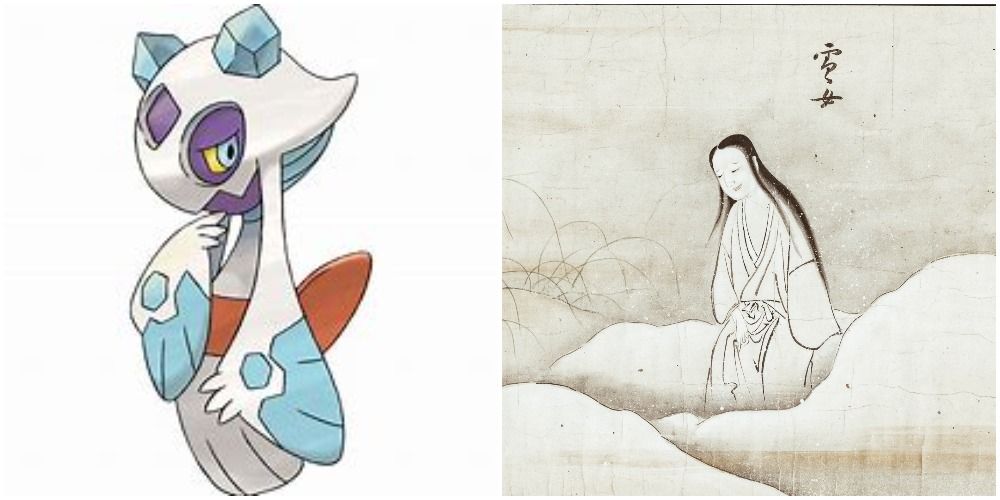 The eerily beautiful Snow Land Pokemon gets its name and peculiarly one-sided gender ratio from its embodiment of the Yuki-onna from Japanese folklore. This yokai has a lot of origin stories from different areas of Japan, but they all agree that the Yuki-onna is a woman who froze to death.

She uses her paranormal beauty to kill unsuspecting victims (usually men). The Pokedex warns trainers to ignore any knocks on the door during a snowstorm and, judging by this story, they might want to take that advice. 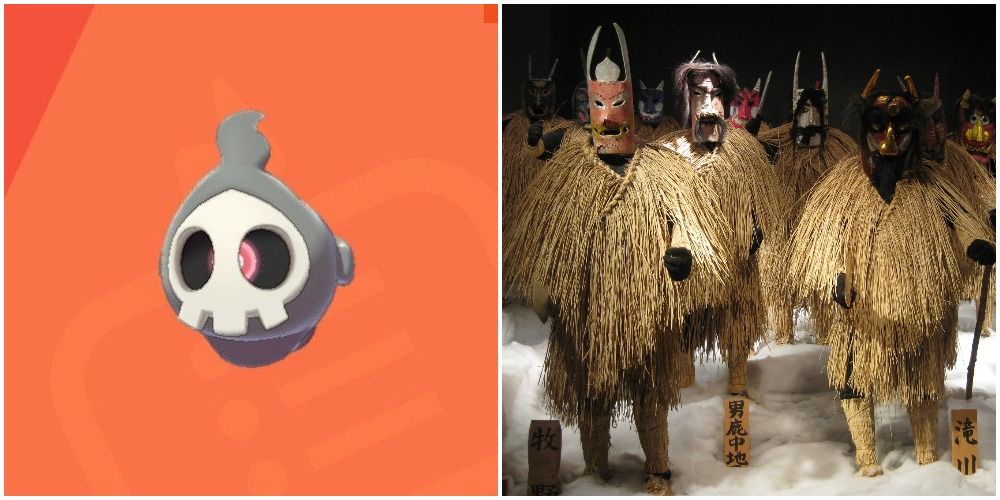 This floating skull might look a little wimpy for an embodiment of the boogeyman with a little red orb rolling around in its head, but don’t be fooled. Namahage is the Japanese interpretation of the boogeyman — a night spirit that comes to punish naughty children and generally provides a spooky threat for parents to use when their kids won’t listen.

The Pokedex entries depict Duskull floating through walls, reveling in the sound of childrens’ wails, and hunting victims until sunrise. Yeah, definitely not on the cutest Pokedex entries list. 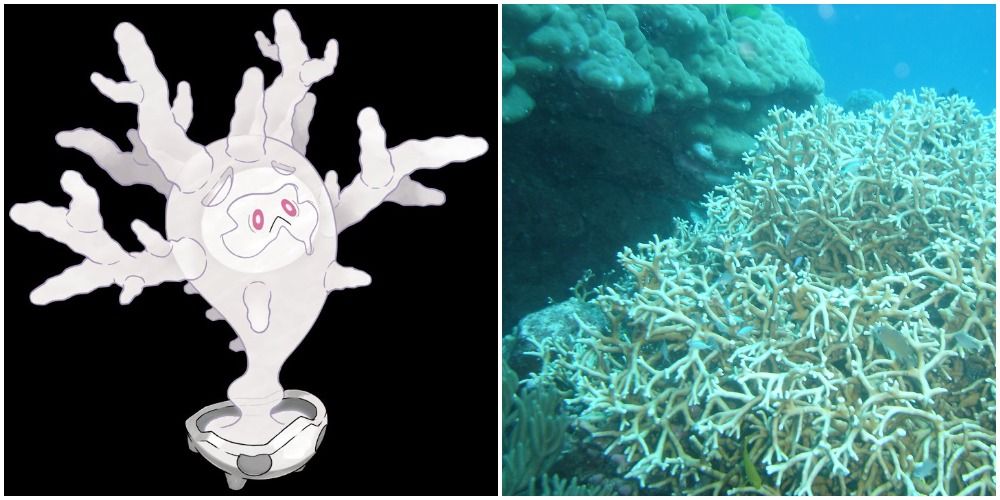 Sometimes, the developers of video games look at tragic things in reality and say “yeah, I can make a Pokemon out of this.” Cursola is a ghost coral, having broken out of its original shell yet still clinging to the remains of its once lively form. Touching the body turns you stiff like a stone gargoyle.

This echoes the reality of many coral reefs in our world; the dying reefs leave stiff, rough shells like a graveyard of sealife. Corsola turned into a ghost type to reflect this reality, and then it remained a ghost type in following additions to the games because all the reefs are…yup, still mostly dead.

7 Yamask – Mask Of The Gold, Black, And Red Death 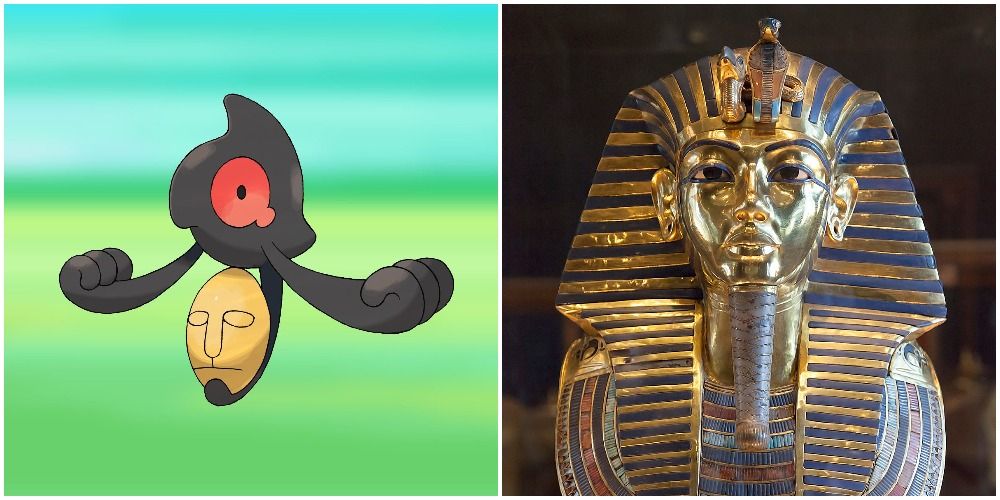 The inspiration behind Yamask is more conspiracy than fact, but the pieces of lore that made their way into Yamask make a dark and kind of sad origin story. Yamask resembles the Egyptian depiction of a human soul, as well as the practice of death masks.

These tend to be casts or covers of a corpse’s face after death like the one King Tutankhamun has in the photo above across various cultures. The Pokedex expands on these ideas by saying that Yamask sometimes sees its own reflection and cries as it remembers its own past lives. It was once human — even in the Pokemon canon. What a sad fate!

6 Decidueye – The Owls Are Not What They Seem 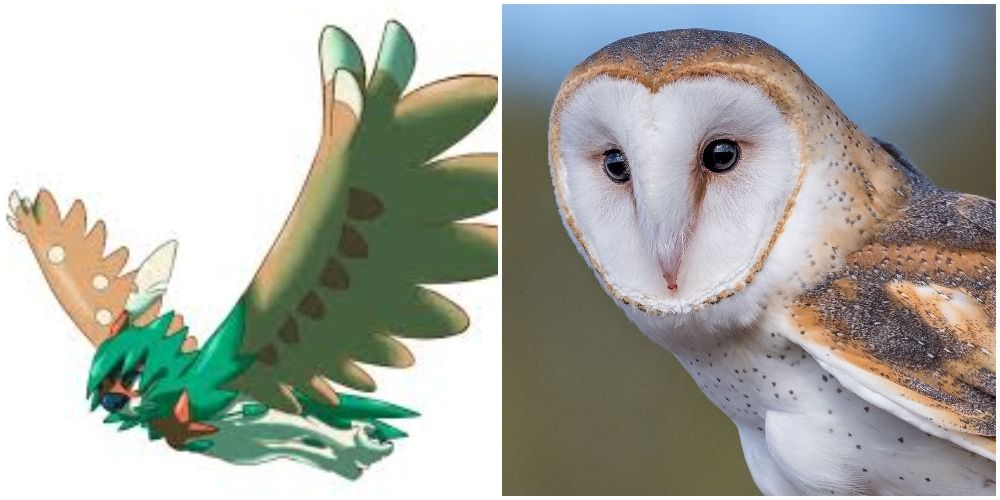 This popular third evolution is a staple for those who lean towards the rogue characters in video games. Decidueye has an assassin aesthetic and affinity for hoods that obscure its face. This Pokemon’s resemblance to owls harkens back to many mythologies in which owls act as messengers between the living and death.

Some of the physical attributes of Decidueye are attributed to the Barn Owl (Ghost Owl) and the extinct Stilt-owl — an owl that used its uncomfortably long legs to sneak up on sleeping birds (to eat) and raid colonies of bigger birds at night (also to eat). You may want to sleep with one eye open because, if you’re smaller than Decidueye, its Stilt-owl instincts might come out. 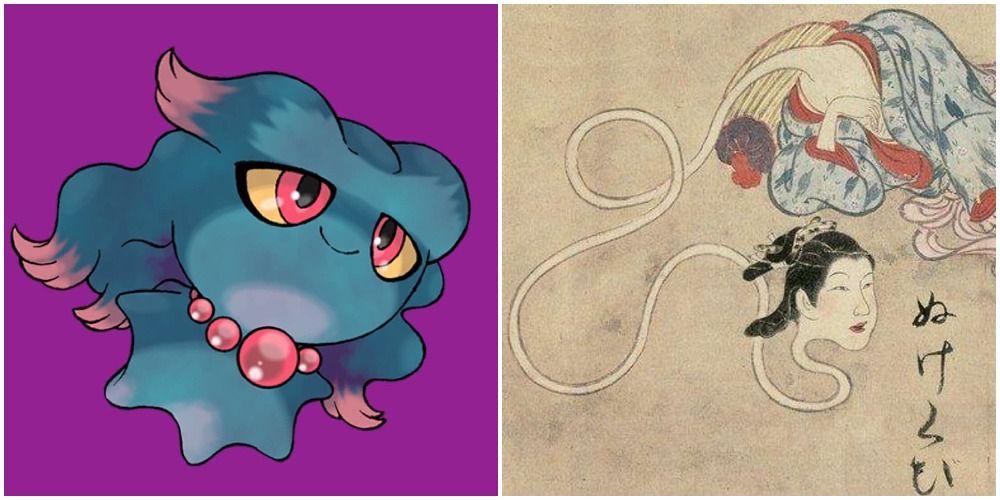 With a name like Misdreavus, you might expect some mischief when one comes around. But Misdreavus is more than just a cute little trouble maker that likes to pull your hair (it does) and mimick crying from another room (does that too). Yeah, Misdreavus is inspired by a myth of the decapitated floating head that shrieks in the night.

The Japanese yokai with this trait is the Rokurokubi — a spirit whose neck stretches until the head pops off and then wails at those who stay up past midnight. So, if you catch a Misdreavus in whatever Pokemon game you’re playing after midnight…it might be time to go to bed. 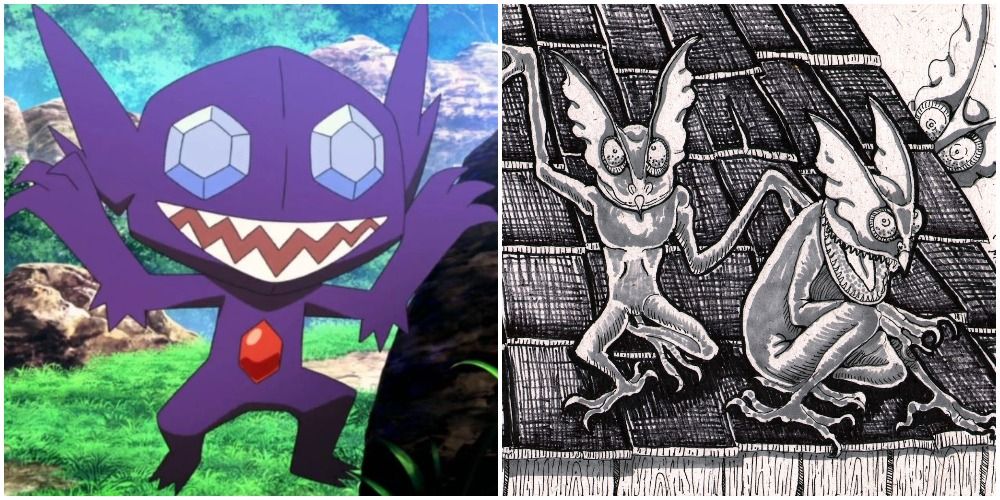 Alright, this one is a little bizarre but it fits Sableye’s alien movement patterns and general appearance. Yup, it’s an alien! Sableye is reminiscent of the Hopkinsville Goblins’ description made famous by the Kelly-Hopkinsville alien encounter in Kentucky in 1955.

Shiny eyes, short legs, claws for arms, and a disturbing sway all come from descriptions by eye-witnesses. Many Japanese media platforms have adapted these creatures into media, so it was only natural to include one in Pokemon. 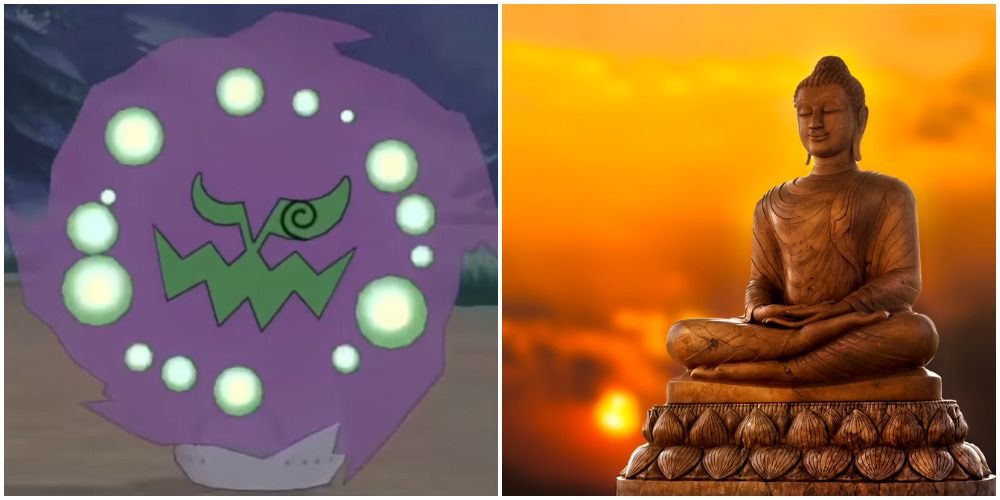 The number 108 is integral to Spiritomb; so much so that the developers went out of their way to ensure that Spiritomb was number 108 in the Sinnoh region. In Buddhist practice, New Year’s Eve in Japan is reserved for ringing a bell 108 times to ward off the 108 temptations that keep humanity from reaching Nirvana.

The spirits are bound to one stone for eternity as punishment for misdeeds and serve as a warning for those who even think of falling prey to those Nirvana-banishing temptations. The green orbs around its face also represent Japa, Buddhist prayer beads. 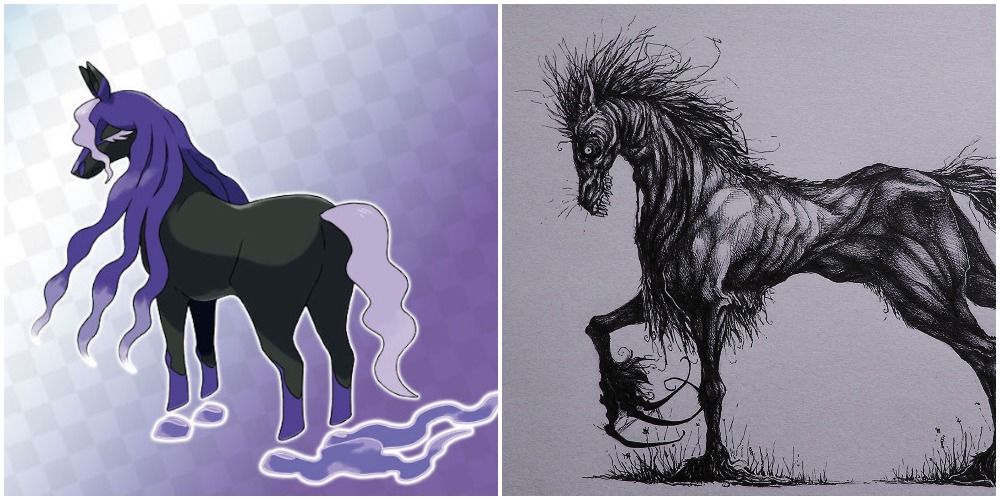 There’s no shortage of ghostly horse lore in the world, and Pokemon drew from it all to make Spectrier. Its appearance is reminiscent of the Kelpie — an often black water-bearing horse that drowns those who try to tame it, and the Pooka — a mischievous faerie horse said to torment the wilds of Ireland.

It also resembles the ashen horse of death akin to the Four Horsemen of the Apocalypse, given its dark fur color and “Grim Neigh” ability. Overall, there are lots of horse myths to choose from, and most of them don’t end well for anyone but the horse. Beware of that.

1 Litwick – Secretly A Harbinger Of Death 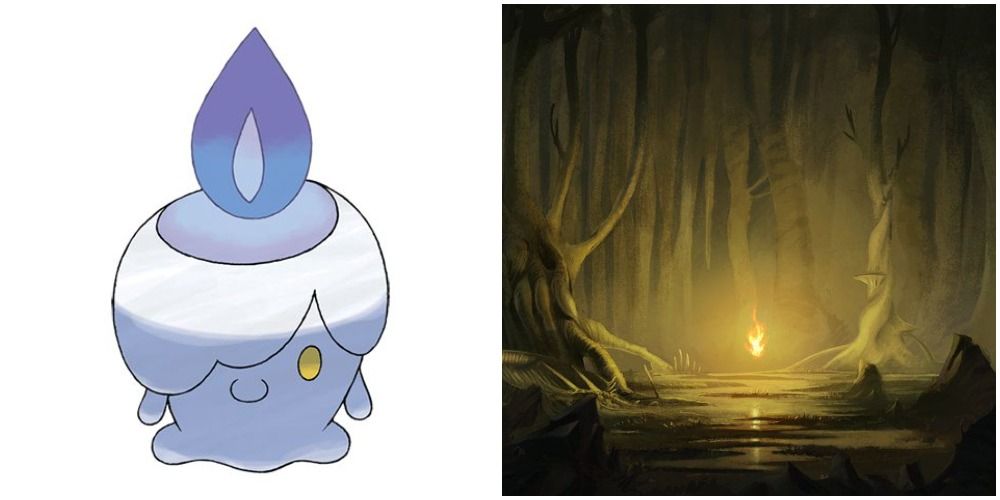 It’s obvious that Litwick is a cute little candle that you might find sitting atop a mantle in your local haunted house, but are you sure it’s a friend? Litwick echoes a hitodama — an apparition of a human soul outside the body. If you take it one step further, Litwick is also like a Will-o’-the-Wisp.

These spirits or disembodied souls offer guidance to travelers ultimately leading them to their destruction. It is the metaphorical representation of an unachievable goal, letting its victims chase it until the victim weakens and succumbs to its own faults and failures. What a bummer behind such a cute face.

NEXT: Digimon: 10 Amazing Digimon Designs That Blow Pokemon Out Of The Water 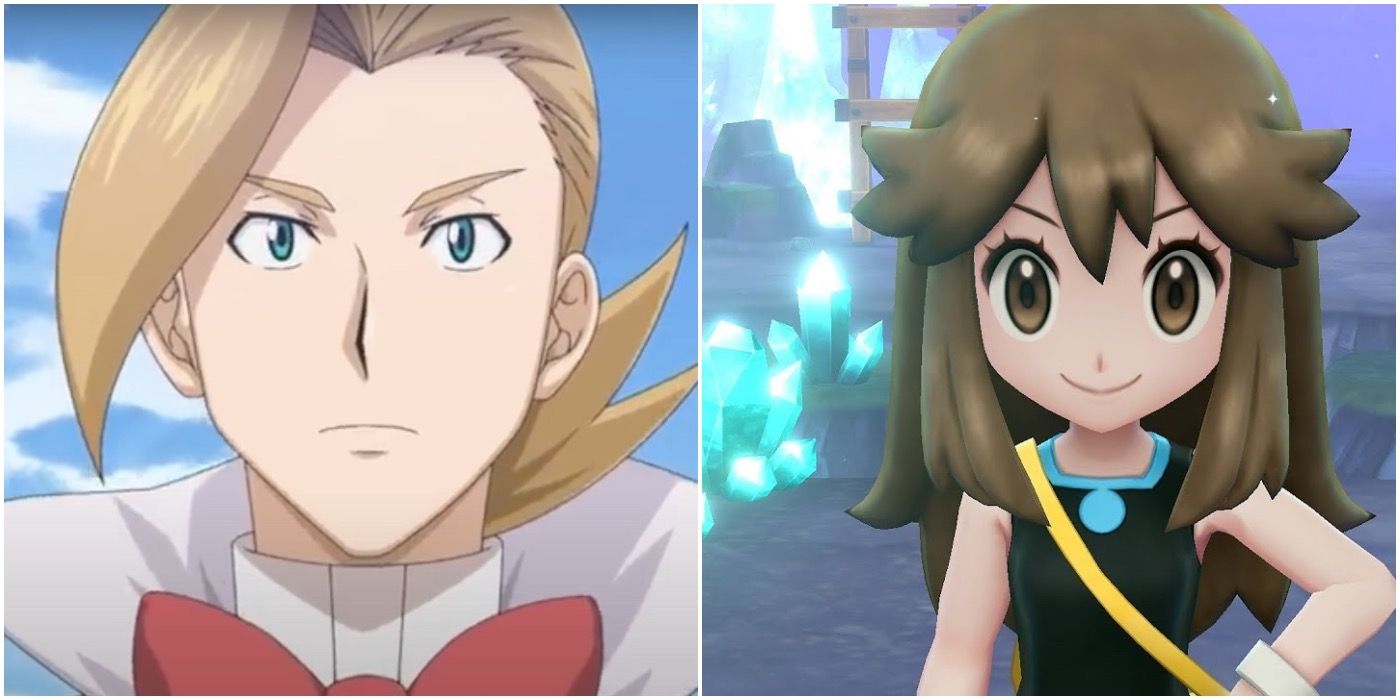 Leah Skay is a writer, amateur entomologist, and game lover from smalltime Delaware. She is a published author in both fiction and nonfiction and is using her time with Valnet and TheGamer to broaden her horizons into writing about video games. She is currently finishing up her last semester at Ithaca College. Outside of perfecting her New Horizons island, Leah can be found knee-deep in the nearest garden or reading one of the dozen unread books on her shelf.