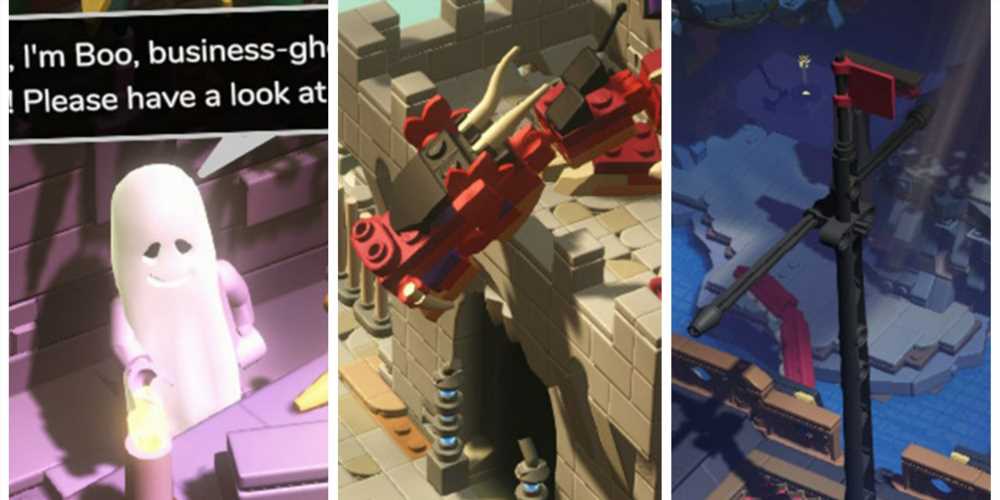 Lego Bricktales is an exercise in paying attention to details. From the puzzles you have to solve, to the random animals or items you have to find for characters, it requires a keen eye. Lego games are pretty well known for their “oh hey, look at that, they put it in the game” moments and Bricktales is no exception. While the fully Lego world is something that's been done for quite some time, it's still amazing to see something created that could be done in the real world, with real Lego.

Bricktales main story is about 15 hours of gameplay, but you can get lost for many more hours figuring out all the side quests or perfecting a build for the various puzzles. During all this time being put into the game, the small details definitely come out, and they’re a welcomed addition. 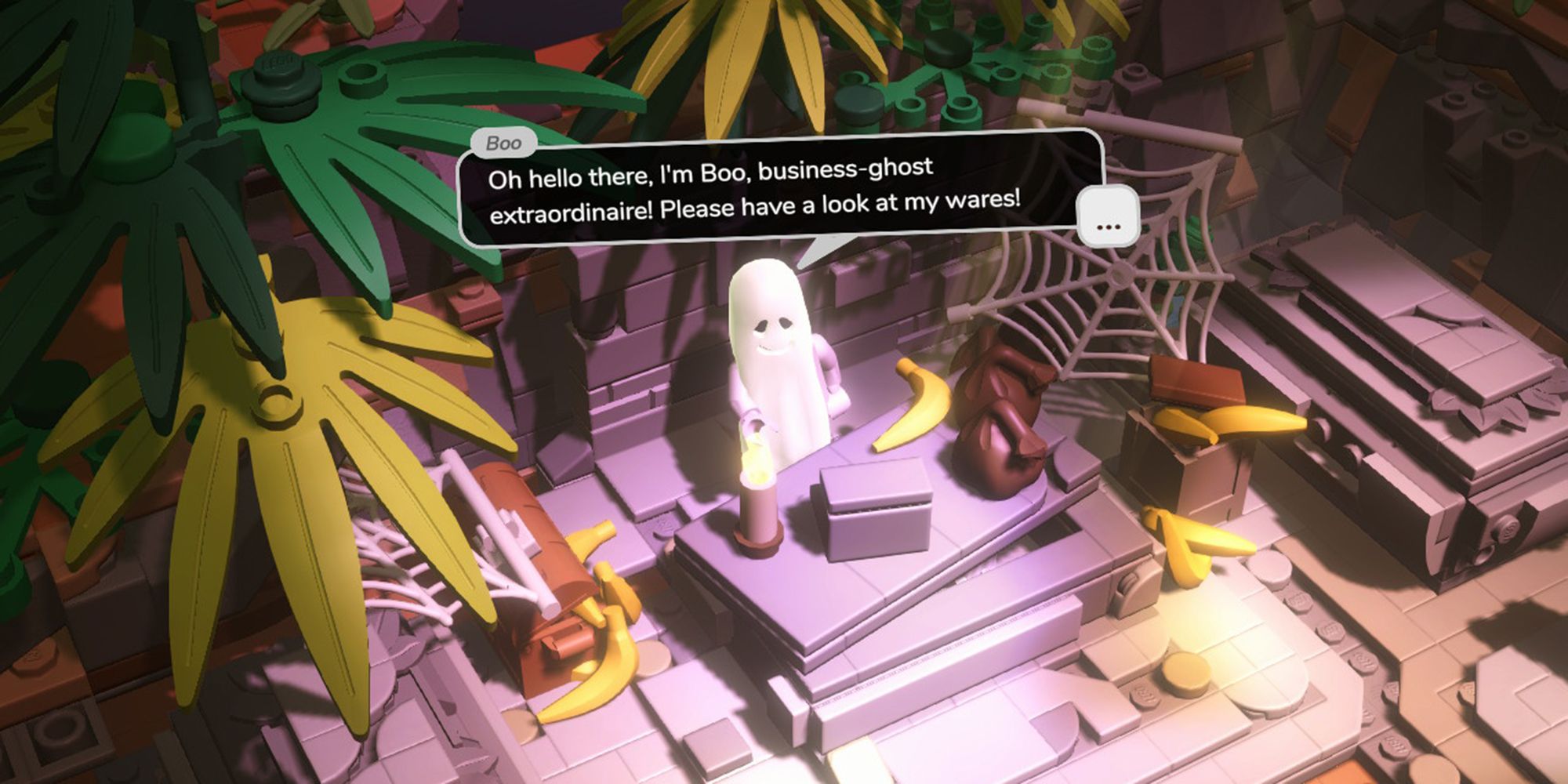 Way back in 1992, Lego came out with a glow-in-the-dark ghost mini-figure that was the darling of ads. Every kid wanted this addition to their builds because it was a ghost that looked even cooler when the lights went out. So imagine the glee when this same spooky mini figure shows up in Bricktales, not just in passing but as the main merchant you have to deal with.

Seeing such a classic Lego mini figure play a big part in a game is both a nice tip of the cap to longtime Lego fanatics and a really cute way of making the NPC selling things fun to be around. 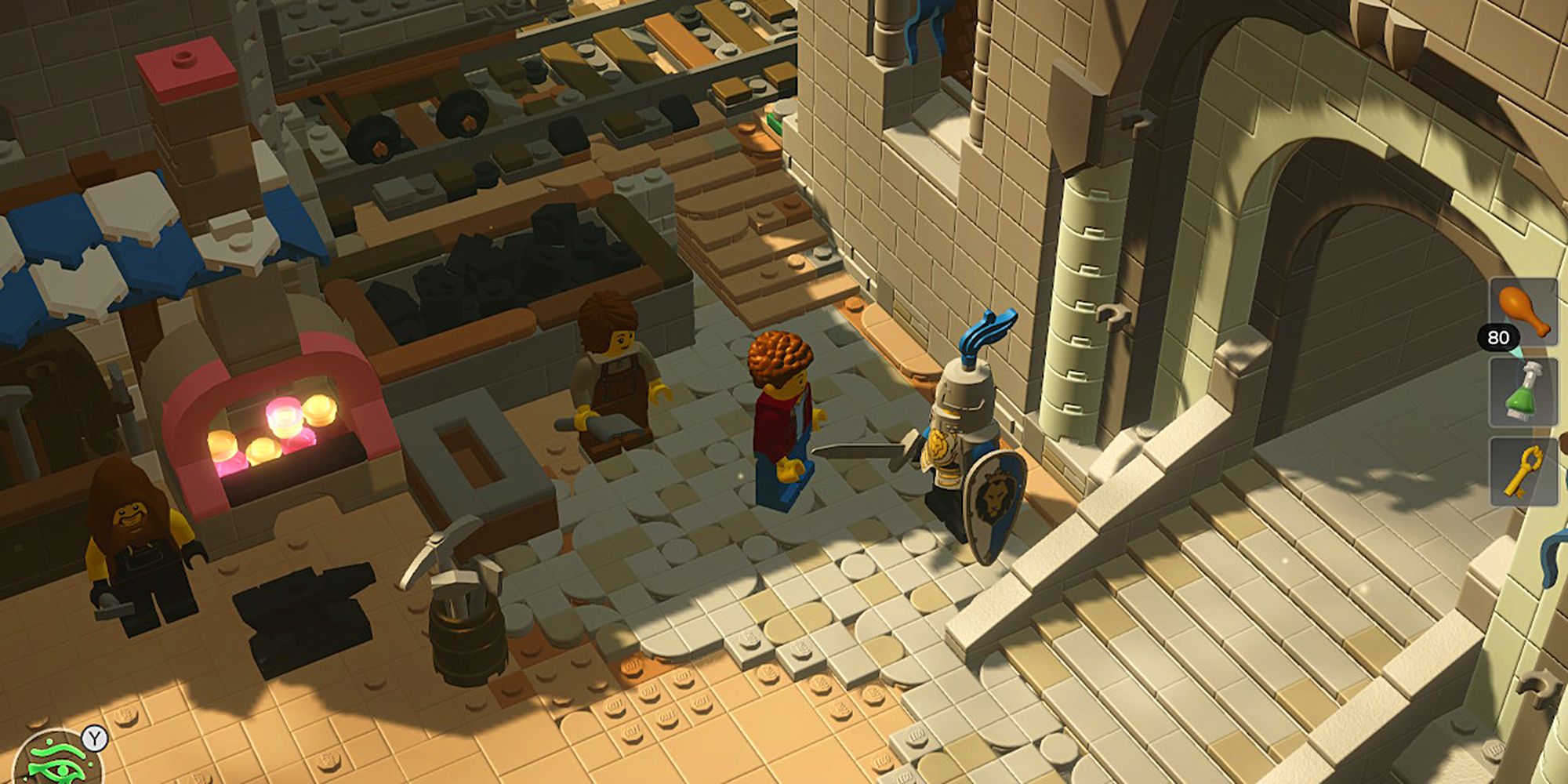 Speaking of mini-figures, the knights in the medieval level gets even cooler when you realize the guards are directly from Lego’s current castle sets. The helmets, shields, and weapons are all there.

Some people are very nostalgic, and Lego castles will always hold a special place in those people's hearts because it’s just simply so cool to build a gigantic castle in your own bedroom. Not creating completely new guards for the game but rather using the ones on store shelves now is a fun addition to the game for the real brick fans.

8/10 Every Environmental Effect Is A Lego 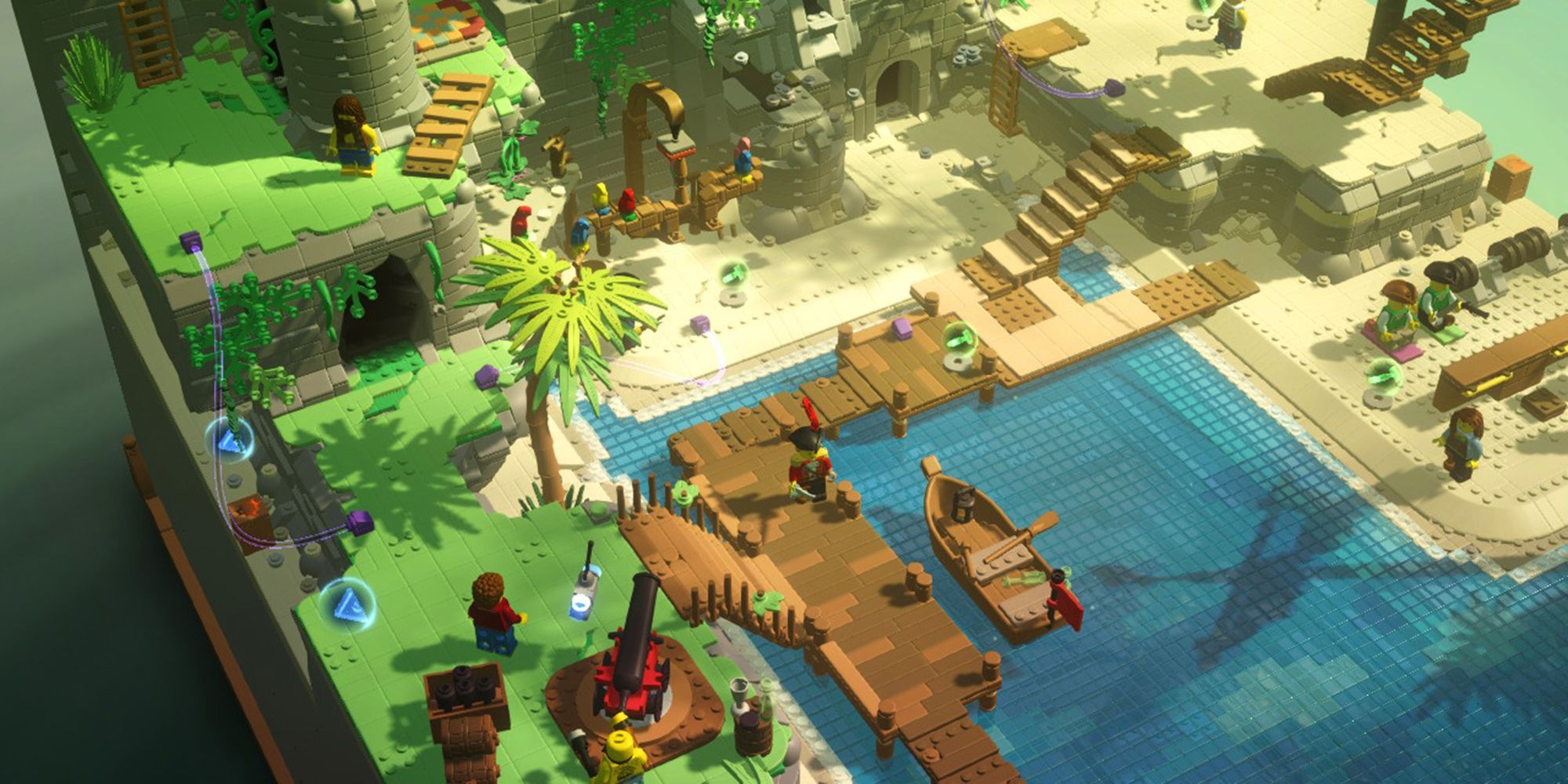 Thunderful Publishing could have easily thrown in some atmospheric effects and nobody would have batted an eye. Look at how Minecraft mods turn the water and cloud effects in the game from blocky bits to realistic liquid and gas effects. Not in Bricktales, however, as the water is essentially little Lego bits. The same goes for explosions, electricity, water, and other “effects.”

Again anything on the screen during Bricktales could be produced in real life by someone completely obsessed with Lego and all the time in the world. 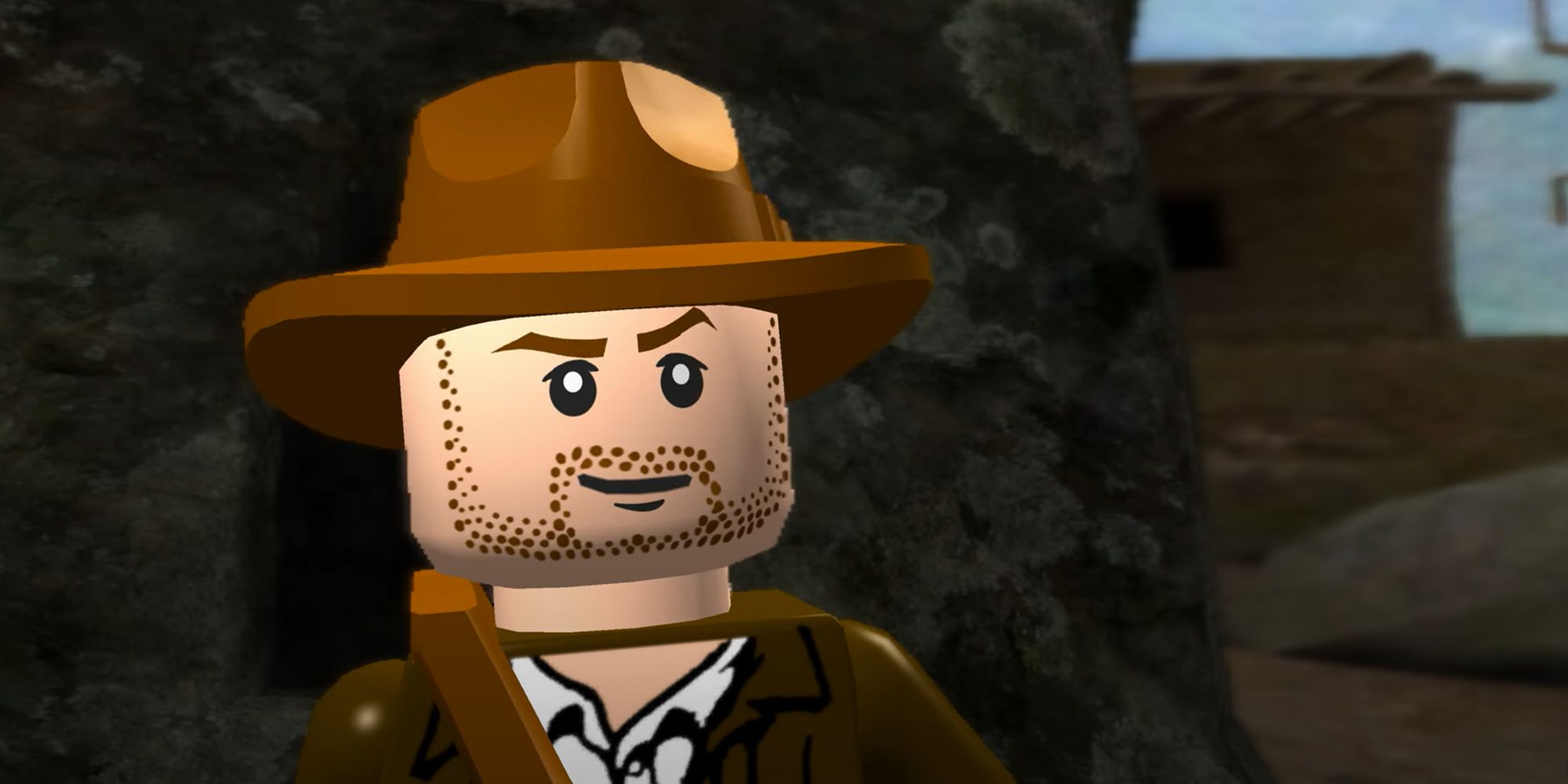 They don’t come out and say it, but the dialogue is cleverly written to make a few Indiana Jones homages. You’ll also get a whip to swing across bottomless pits and do some treasure-finding archeology.

This game is very much its own story and at no time do they bring in other Lego properties that have certain “copyrights” attached to them. Still, the game is littered with little hints to classic movies, and it had to be done very much on purpose.

6/10 The Layers Of The Level Visible To The Player 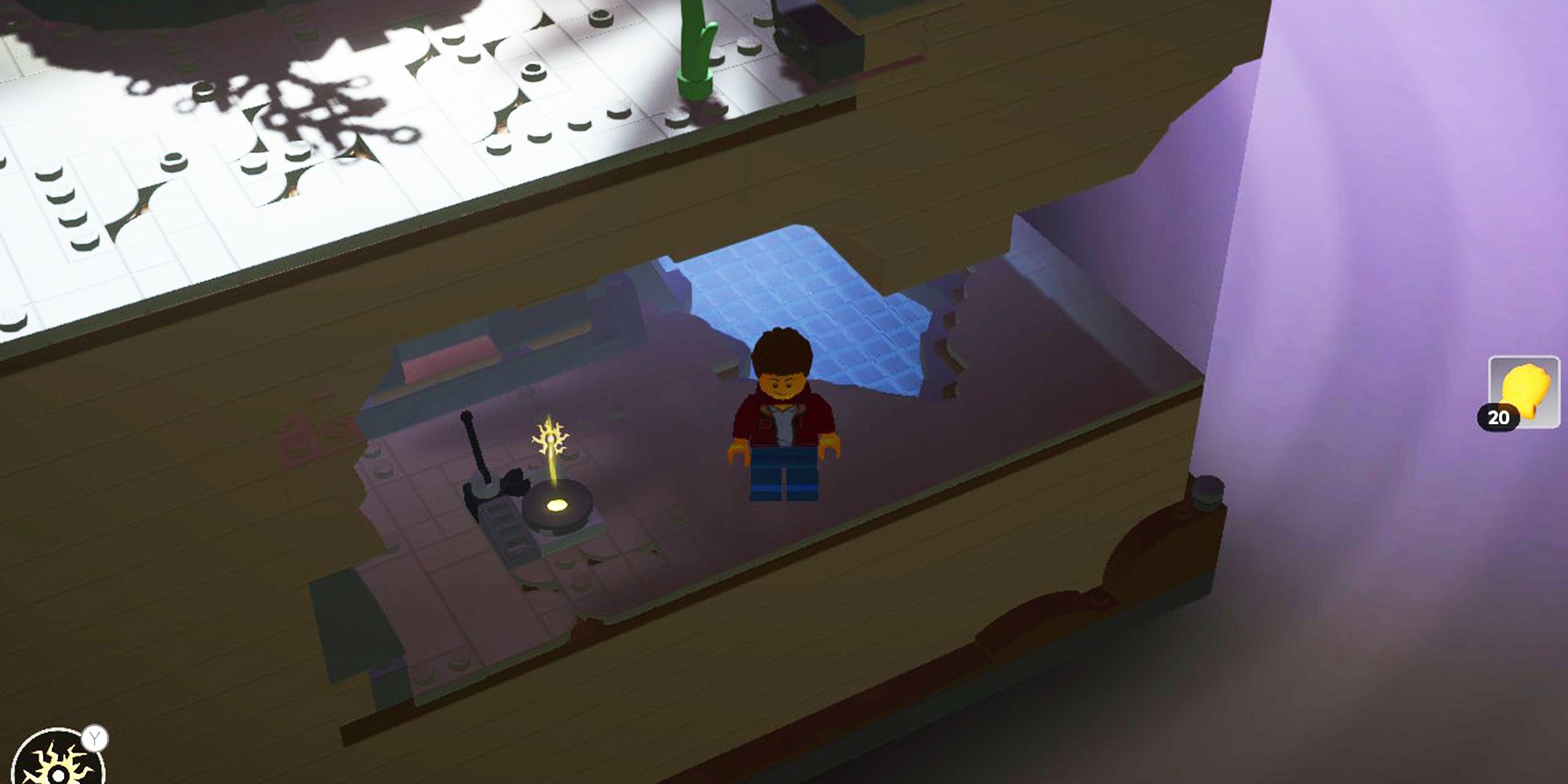 The Diorama setup of each level section makes the world feel like a very real Lego creation, but can also give you hints about where to go. Each Diorama is essentially a slice of the world, so you can see the side profiles of caves under its top side.

Since the game rewards your curiosity for exploring different areas, this is very much a nice touch because it encourages you to see how you can get to that lower section, where otherwise you wouldn’t have even known it was there.

5/10 The Game's Obsession With Cats 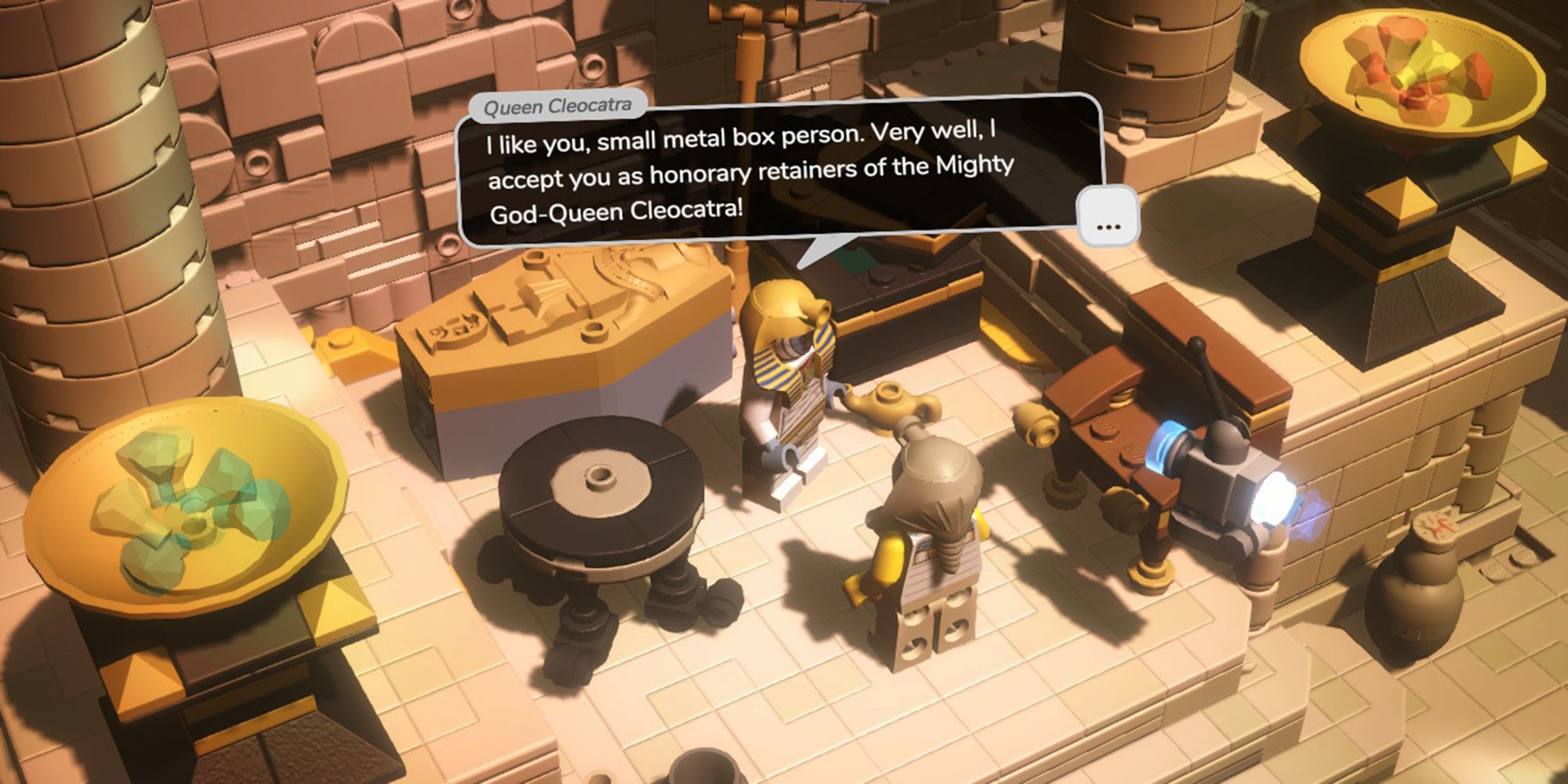 There is no holding back on Thunderful Publishing's love for cats. In the Desert Level, cats are everywhere, and even key missions include finding the Queen Cleocatra's favorite feline. There is no shortage of cat puns and characters telling you how much they love cats.

There are references in other levels in the game about cats as well. It's amusing to the point where you find yourself walking around to all the cats and interacting with them just to see the dialogue box go "Meow." Lego Bricktales is definitely the cat person of video games. 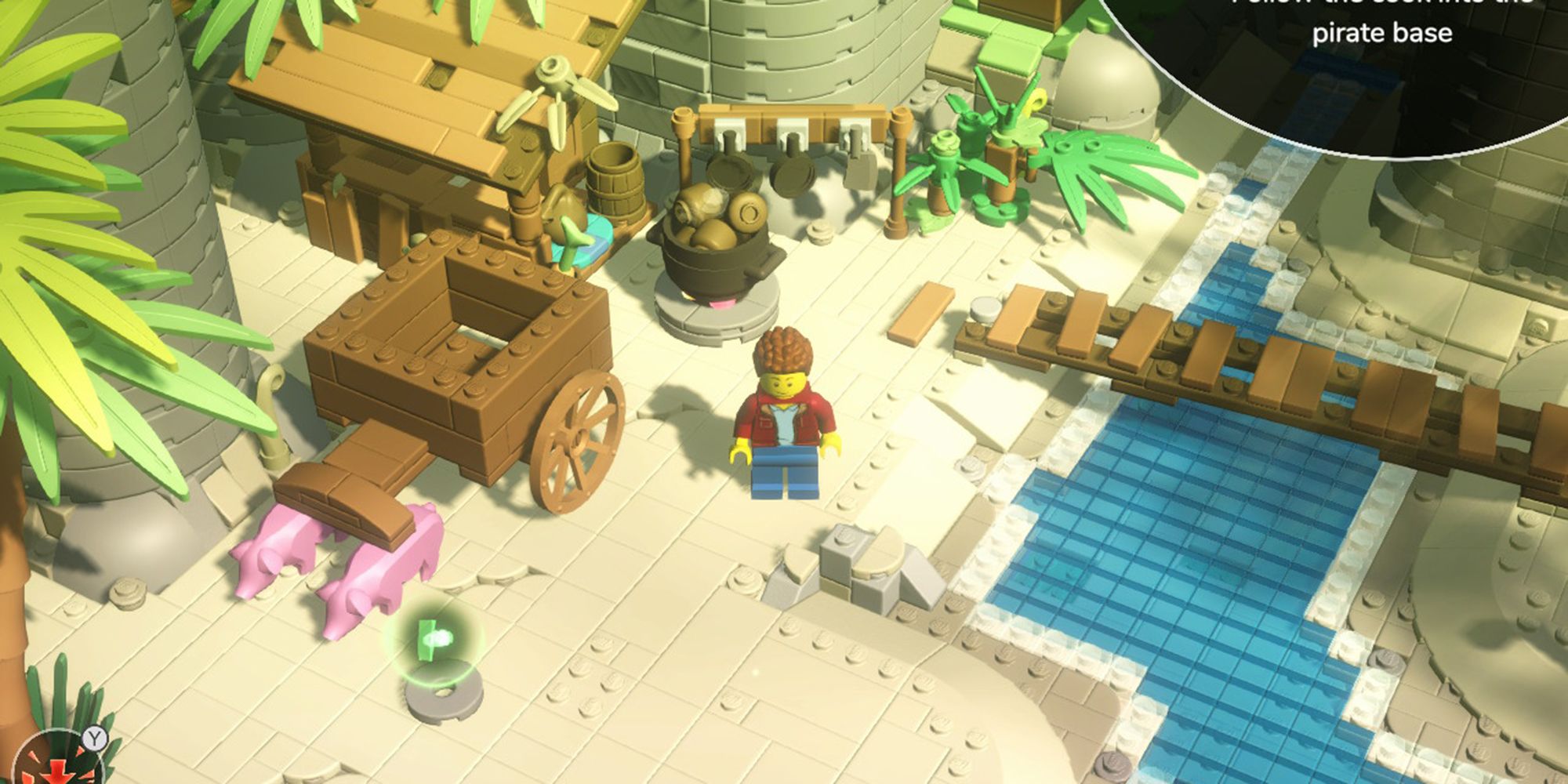 This isn’t some master stroke of game design or some hard-to-find detail, but rather just amusing. The cart the chef has you make in the Caribbean Level is pulled by pigs, which seems like the most out-of-place of transportation-helping barn animals.

Of all the Lego animal figurines out there, it’s just humorous that the game designers decided to stick pigs there. This cart is intended to haul coconuts, and since apparently pirates don’t have horses, they go with oink power. 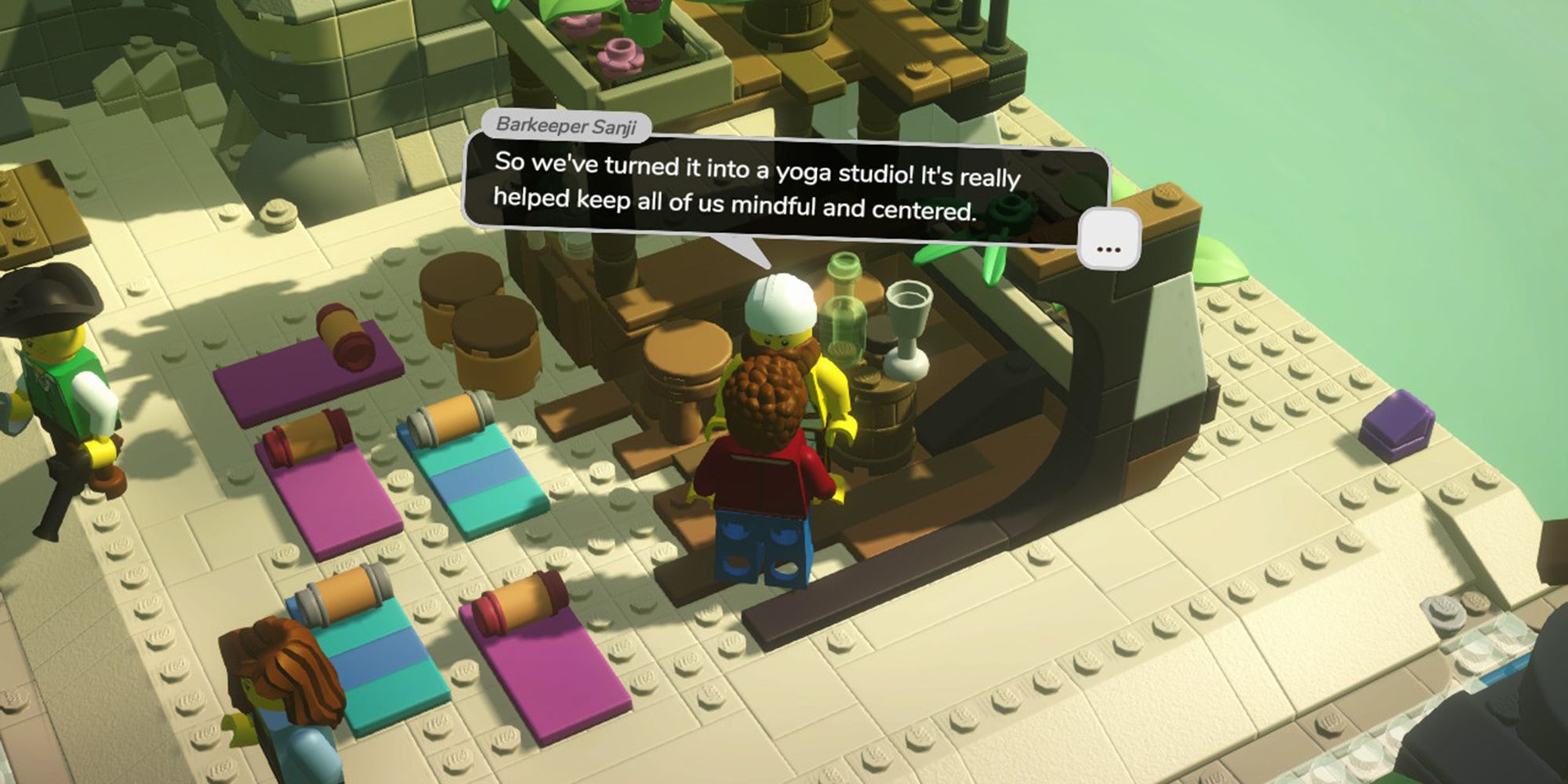 Also in the Caribbean Level, there are pirates doing yoga. While historic pirates were generally crusty, nasty, mean-spirited criminals who you wouldn’t be around, Lego pirates like to practice downward dog when they’re stuck on an island.

Some build challenges even revolve around the pirate yoga studio, and we’re grateful you get to see this softer, more health-conscious side of scurvy dogs. We half expected a smoothie bar and a crossfit gym on the island as well. 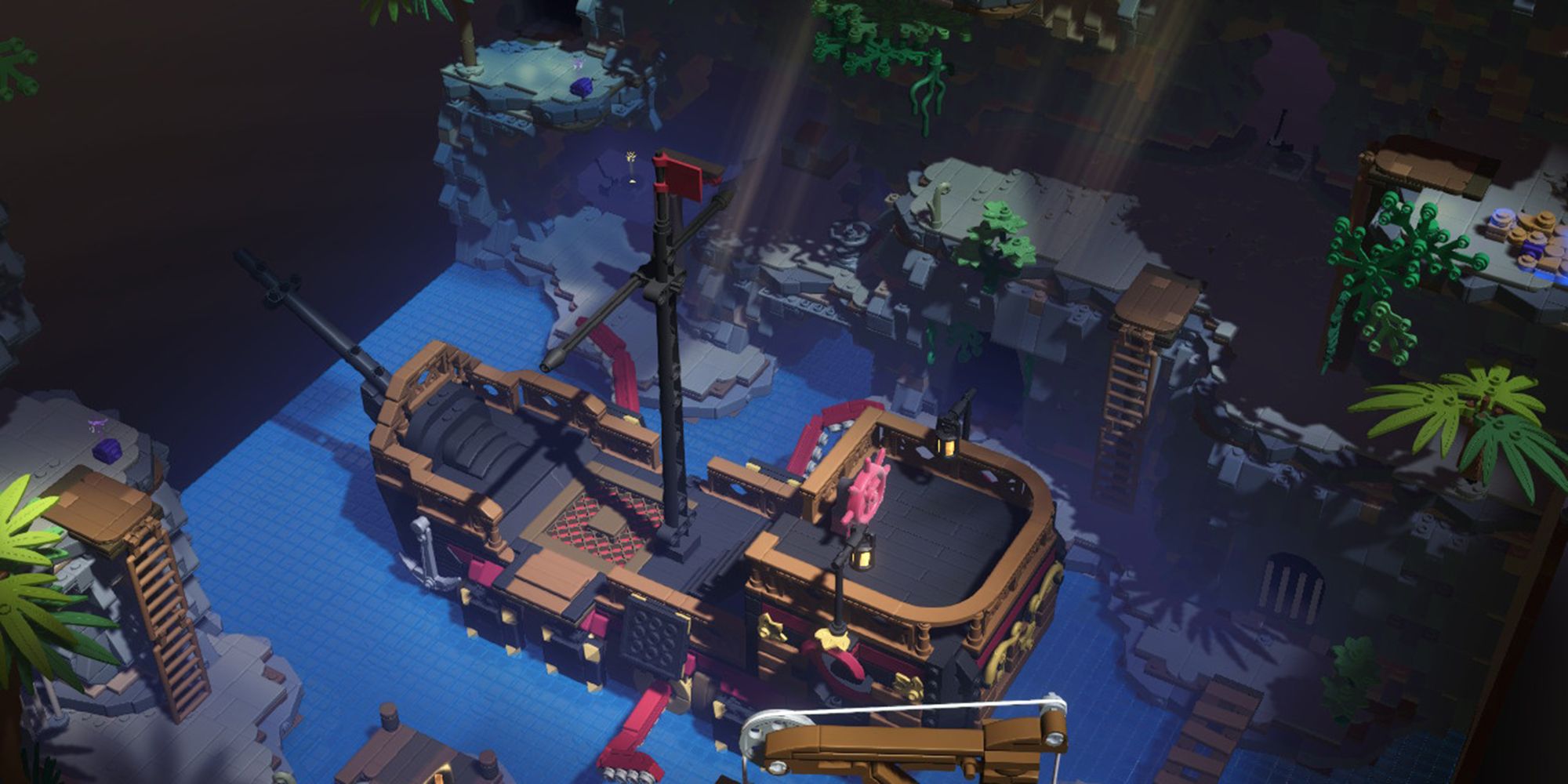 The ship pirates need to get off the Caribbean Level island is locked in an indoor cave much like One-Eyed-Willies ship from the pirate movie classic “The Goonies.” All that is missing is a “Hey you guys!” in Sloth’s voice.

We can't help but think this was absolutely the point as this game tends to slyly hint at the 80s and 90s movies' nostalgia without referencing it directly. Naturally, you’re able to free the ship from the cave, just like in that movie classic. 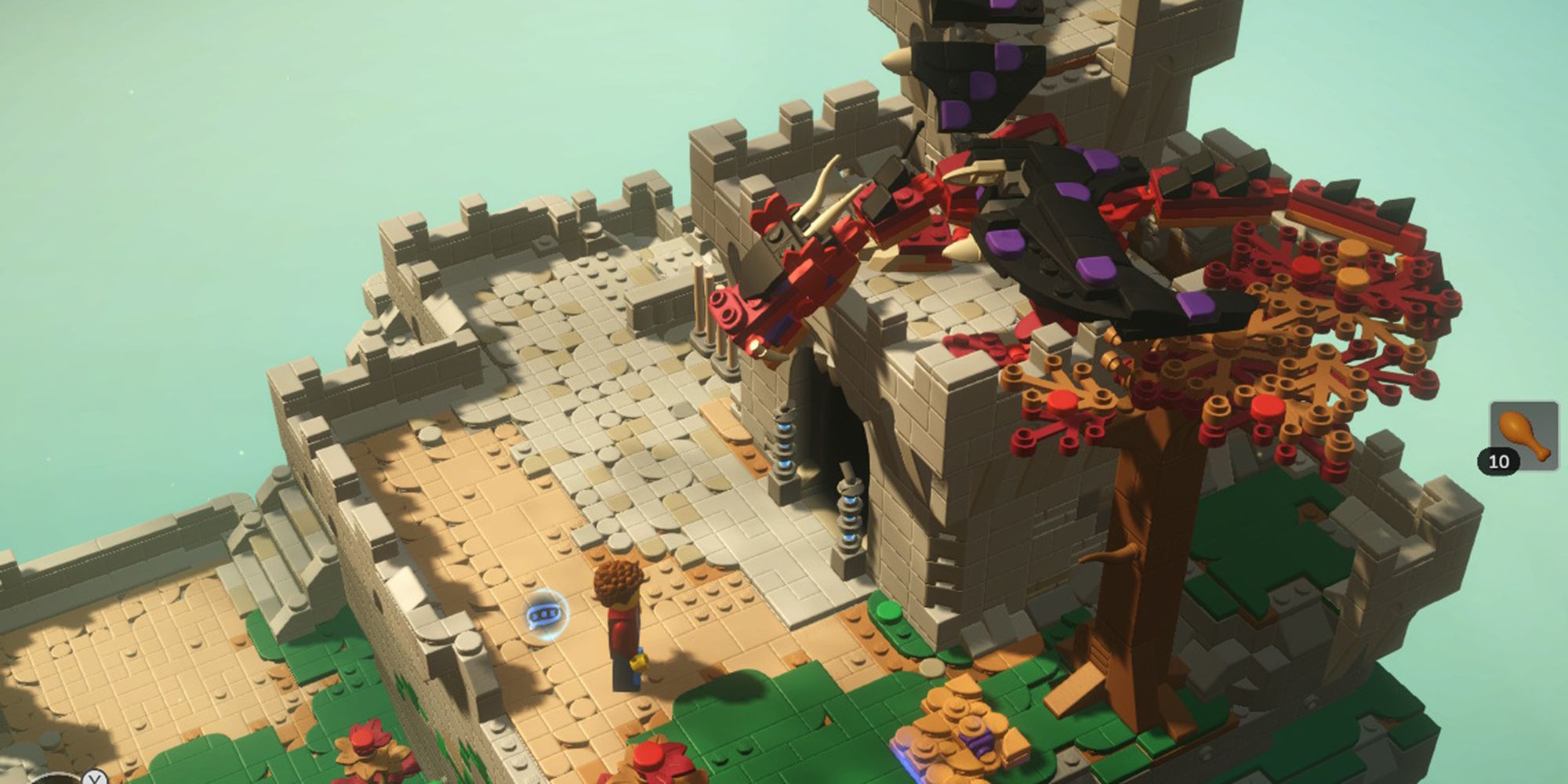 This is another tip of the cap, although dragons loving gold isn’t exactly unique ground covered in fantasy. Smaug is the fire drake in The Hobbit who loves gold so much he sits on a whole mountain full of it.

While playing through Bricktales, you’ll note the dragon in the medieval levels is sitting on a mountain, wanting gold and colored red like a fire drake. We’re just glad they didn’t break Bricktales into three different games like the Hobbit movies and throw in a pointless romance plot.