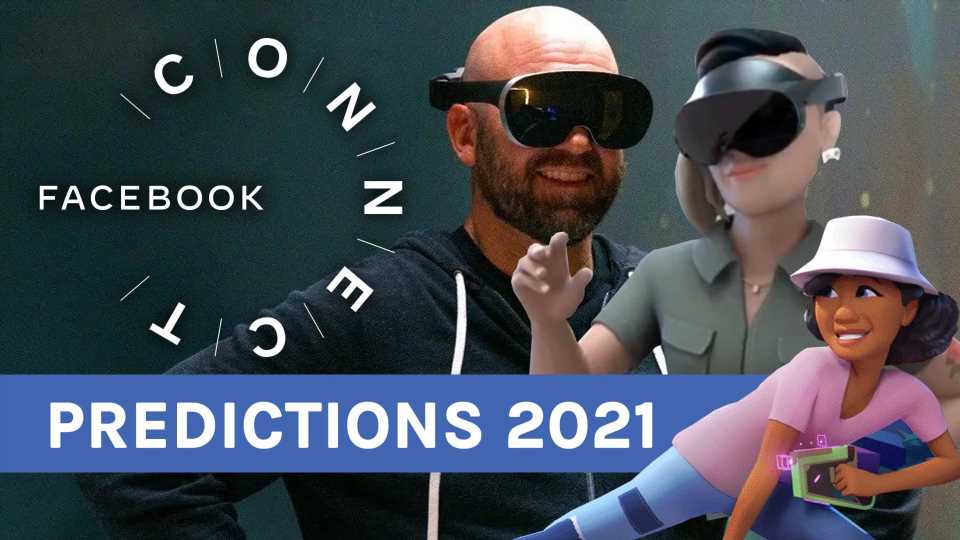 Facebook Connect is just around the corner. Here’s six predictions we have for this years’ show.

With Oculus Quest 2 continuing to do well for developers and a Quest 3 announcement not expected anytime soon (boy could we look silly in two days), this is set to be an interesting year for Connect. We are anticipating new hardware reveals, but we’re likely to see equal attention paid to the software and strategies Facebook is putting into its plans for the future of VR and AR.

So we’ve rounded up our thoughts on six areas Facebook’s likely to touch on this year.

At this point this one seems like a given. Multiple leaks this week have indicated that Facebook is not too far off of revealing a new standalone headset, and reports going further back suggest it won’t be the Oculus Quest 3. Instead, we’re expect the company to announce a high-end device that costs more than Quest 2 but includes advanced features like a new tracking system for the controllers that ditches the traditional tracking ring. This device isn’t expected to launch this year and it more than likely won’t replace Quest 2. Think of it as more of an enthusiast product for dedicated VR users and businesses to take advantage of.

Last week The Verge reported that Facebook is planning a rebrand of the entire company to reflect its push toward its take on the metaverse. This could well include a brand new name for the entire corporation that treats Facebook, Oculus, Whatsapp, Instagram and others as separate entities. If there’s any truth to the report, where else better to confirm it than at Connect?

No one knows exactly what Facebook’s new name could be, but we’ve seen bets taken on Meta, Connect and Horizon.

Updates On The Horizon

Speaking off Horizon, we’re likely to see at least some sort of update on Facebook’s growing library of social apps that fall under that banner. We’re still waiting on a full release of the long-delayed and recently renamed Horizon Worlds, while the company launched its VR productivity app, Horizon Workrooms earlier this summer.

We could hear new details for Worlds, then, or we might hear about new apps that could carry the Horizons label.

Facebook has been rolling out new features for the Quest platform pretty solidly over the past year. We’ve seen improved hand-tracking, support for higher refresh rates and the ability to mark your couch in passthrough, not to mention Air Link and other major updates. But it’s been a while since the last big software launch, and that’s likely because the company is saving some news for Connect.

The only question is what’s in store. We’ve found references to smarter warnings about intrusions into your play space — could that be announced this week? It’s also been confirmed on multiple occasions that Facebook is working on a social element for the Oculus Home environment – could we finally see that announced as well?

Here’s the thing about 2022 – we really don’t know too much about what’s coming just yet. Resident Evil 4 is now out and Medal of Honor is due to arrive before the end of the year, so we’re hoping Facebook gives us some games and apps to look forward to in the coming months. The company has been on a bit of a spending spree, buying up Beat Games, Ready At Dawn, Sanzaru Games, Downpour Interactive and BigBox VR, but is yet to publish a brand new Oculus Quest game from any one of those studios (not counting Rift’s Lone Echo 2). Perhaps we could finally see what at least one of the studios is working on at Connect.

A Glimpse Of The Far-Flung Future

Tradition dictates that, after this year’s keynote, Facebook Reality Labs’ Michael Abrash will take to the stream to deliver a deep dive into the latest goings at the company’s R&D department. If Quest Pro is coming soon then what could the headset after it feature? What’s the latest with Facebook’s ongoing work with AR hardware? Those are just some of the questions we’ll eager to see answered after this session.

Those are our Facebook Connect predictions, but what are yours? Let us know in the comments below and be sure to be back here at 10am PT on October 28 when we’ll bring you full coverage of the keynote.