Throughout the King Crab Tournament, 100 crabs will be given away to participants. They are red snow crabs, a local delicacy that typically sells for around 3000 yen each–or roughly $30 USD–so that’s a total of $3000-worth of crabs.

So why crab? Well, besides the fact that the game itself is extremely crab-focused, there’s a law in Japan that limits the cash winnings for open game tournaments like this to 100,000 yen. Giving away crabs instead of cash is seen as a means of sweetening the pot, so to speak. 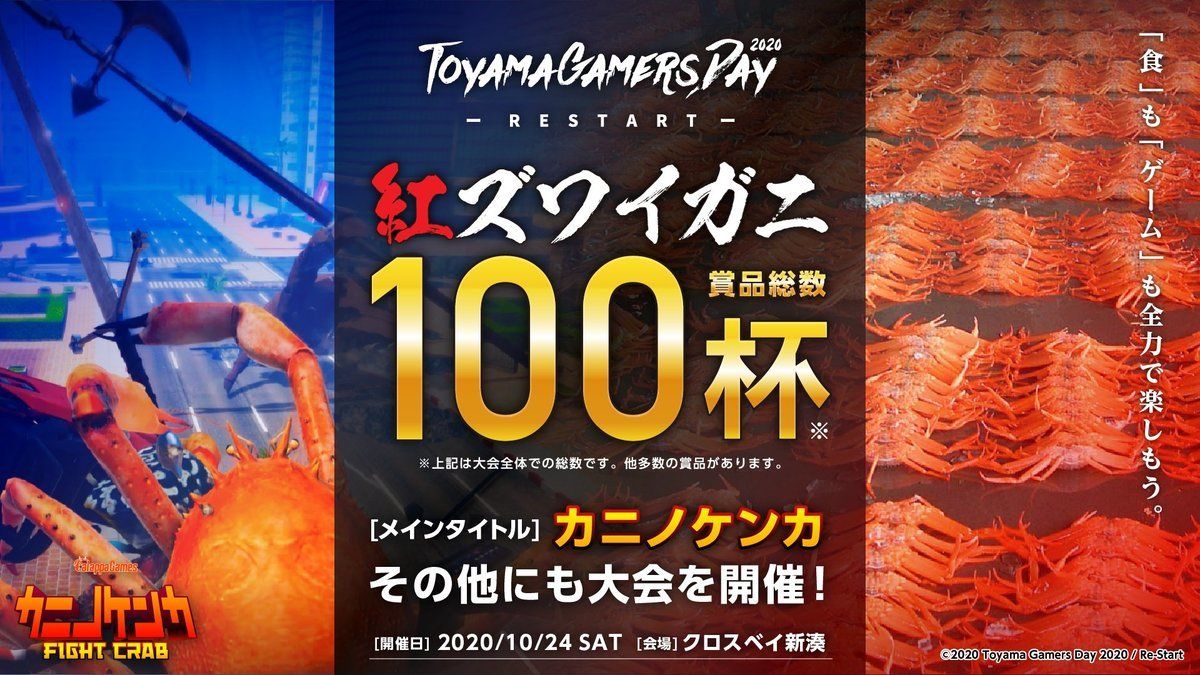 According to Kotaku, Toyama Gamers Day isn’t just giving away crabs for the Fight Crab tourney. They’re also giving them away for a Fortnite tournament that is expected to achieve a much larger audience.

The tournament is set to be held on October 24 with a maximum of 128 participants. Gamers will play on the Nintendo Switch version of Fight Crab that just released last August.

In case you haven’t kept up on your crustacean-based fighting game news, Fight Crab is one-part fighting game, one-part physics simulator, and the rest is utter lunacy. You play as an immortal crab god that has somehow mastered all human weapons in order to take over dry land. Although these immortal crabs cannot be killed, there is a special rule that all crab-kind abides by: “He who turns his back to the ground shall know defeat…”

The objective is to flip over your opponent using any means necessary. This can include claws, swords, guns, jet engines, giant drills, kamehameha waves, and even more esoteric means of flipping a giant lobster.

Oh, and it’s not all crabs. There’s lobsters, crayfish, mantis shrimp… “Crab” is a very liberal term in Fight Crab.

Fight Crab is available now for Nintendo Switch and PC via Steam.