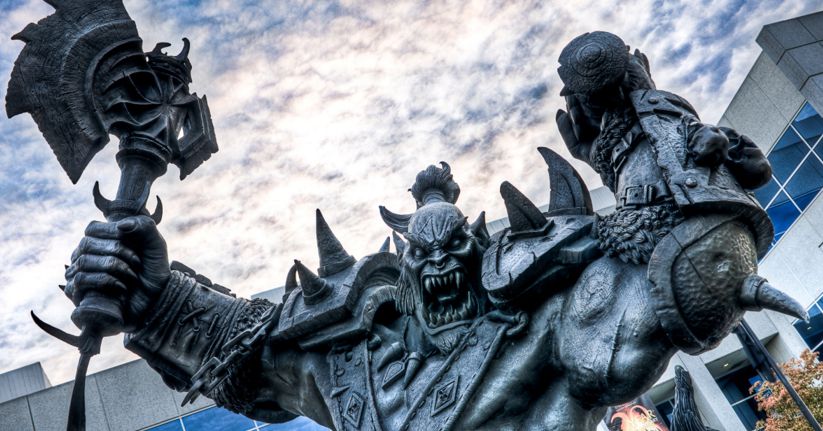 Activision Blizzard employees will stop work on Wednesday in protest of an “abhorrent and insulting” response from company leadership to a lawsuit that exposed serious allegations of sexism and harassment at the game publisher.

The lawsuit, filed July 22 by the California Department of Fair Employment and Housing (DFEH), described a company culture that allowed for gender-based discrimination and “constant sexual harassment.” A two-year investigation into the company alleged that women were held back from promotions for various reasons, including the possibility that they may eventually take maternity leave, and that female employees were subject to “derogatory comments about rape” and other demeaning behaviors.

An official response from Activision Blizzard said the lawsuit “includes distorted, and in many cases false, descriptions of Blizzard’s past.”

More than 2,600 current and former Activision Blizzard employees have since signed an open letter in support of the DFEH lawsuit. (Sources told Polygon that includes at least 1,600 current employees and 400 former employees, by the last available count.) In it, the employees said they don’t trust leadership to “hold abusers accountable for their actions,” and that the official statements “damaged our ongoing quest for equality inside and outside of our industry.” Now, employees will walk out of work — both virtually and at the Blizzard campus in Irvine, California — to protest executive response.

“We believe that that our values as employees are not being accurately reflected in the words and actions of our leadership,” protest organizers said in a statement sent to Polygon. Current employees at Activision Blizzard are demanding that executives “improve conditions for employees at the company, especially women, and in particular women of color and transgender women, nonbinary people, and other marginalized groups.”

You can read the full statement of intent published below.

Given last week’s statements from Activision Blizzard, Inc. and their legal counsel regarding the DFEH lawsuit, as well as the subsequent internal statement from Frances Townsend, and the many stories shared by current and former employees of Activision Blizzard since, we believe that our values as employees are not being accurately reflected in the words and actions of our leadership.

As current Activision Blizzard employees, we are holding a walkout to call on the executive leadership team to work with us on the following demands, in order to improve conditions for employees at the company, especially women, and in particular women of color and transgender women, nonbinary people, and other marginalized groups.

2. The adoption of recruiting, interviewing, hiring, and promotion policies designed to improve representation among employees at all levels, agreed upon by employees in a company-wide Diversity, Equity & Inclusion organization. Current practices have led to women, in particular women of color and transgender women, nonbinary people, and other marginalized groups that are vulnerable to gender discrimination not being hired fairly for new roles when compared to men.

3. Publication of data on relative compensation (including equity grants and profit sharing), promotion rates, and salary ranges for employees of all genders and ethnicities at the company. Current practices have led to aforementioned groups not being paid or promoted fairly.

4. Empower a company-wide Diversity, Equity, & Inclusion task force to hire a third party to audit ABK’s reporting structure, HR department, and executive staff. It is imperative to identify how current systems have failed to prevent employee harassment, and to propose new solutions to address these issues.

At the Blizzard campus in Irvine, California, employees will meet Wednesday at the main gate. (Protesters said they will not enter the Blizzard Campus “due to the current COVID health and security measures.”) Online, employees will use the #ActiBlizzWalkout hashtag to participate virtually. Workers across the video game industry are encouraged to support the protest, too — many workers have suggested an alleged racist and sexist culture is not isolated to companies like Blizzard.

Organizers are also asking supporters to donate to various charities — including Black Girls Code, Futures Without Violence, Girls Who Code, RAINN, Women in Animation, and Women in Games International — to “stand in solidarity.”

Though unionization in the video game industry is rare, the industry is slowly moving toward unionized worker solidarity. As of 2019, 47% of developers support unionization efforts, according to a Game Developers Conference Survey — 16% of those surveyed were explicitly against it. In 2019, Riot Games employees similarly walked out in protest of the company’s employment policies, including forced arbitration. The walkout came after a 2018 Kotaku report that alleged a sexist culture that enabled discrimination and harassment.

Progress has since continued in favor of unionization. In 2020, Paradox Interactive workers in Sweden signed a collective bargaining agreement with 200 union members. South Korean employees at Nexon have unionized, too. Later in the year, contracted workers at Voltage Entertainment, who write for mobile app Lovestruck: Choose Your Romance, made history by going on strike — and winning. The 21-day strike ended with an agreement that earned workers better pay and transparency.

“At the end of the day, the thing that really gets positive change for workers is economic leverage, and economic leverage comes from the fact that we, the workers, create all the value and profit and quality of our companies,” Campaign to Organize Digital Employees (CODE) campaign lead Emma Kinema told Polygon at the time. “And so if we can withhold that labor collectively, we have a huge amount of power in the workplace.”