“Cryosleep cycle complete. No casualties. Time since launch: 197 years. We’re finally back.” Jack Gelder stands on the deck of his ship, planning his triumphant return. An equipment malfunction meant they’d had to take the long way back, but at long last they’d made it to Star Union space, to the military border colony of Leave-6. Home.

A lot can change in two centuries though. As Gelder and his troops enter orbit around Leave-6 there’s…nothing. The fabled Elysium pleasure parks, gone. The lush greenery replaced with arid wasteland. And the former imperial soldiers?

Well, by the time this is over you’ll wish they’d disappeared too.

Going over my notes for this review, I realized I have a lot of complaints about Age of Wonders: Planetfall—some minor, some not-so-minor. Planetfall is a flawed game and when I get too close to it, when I start digging into the details, those flaws loom large. 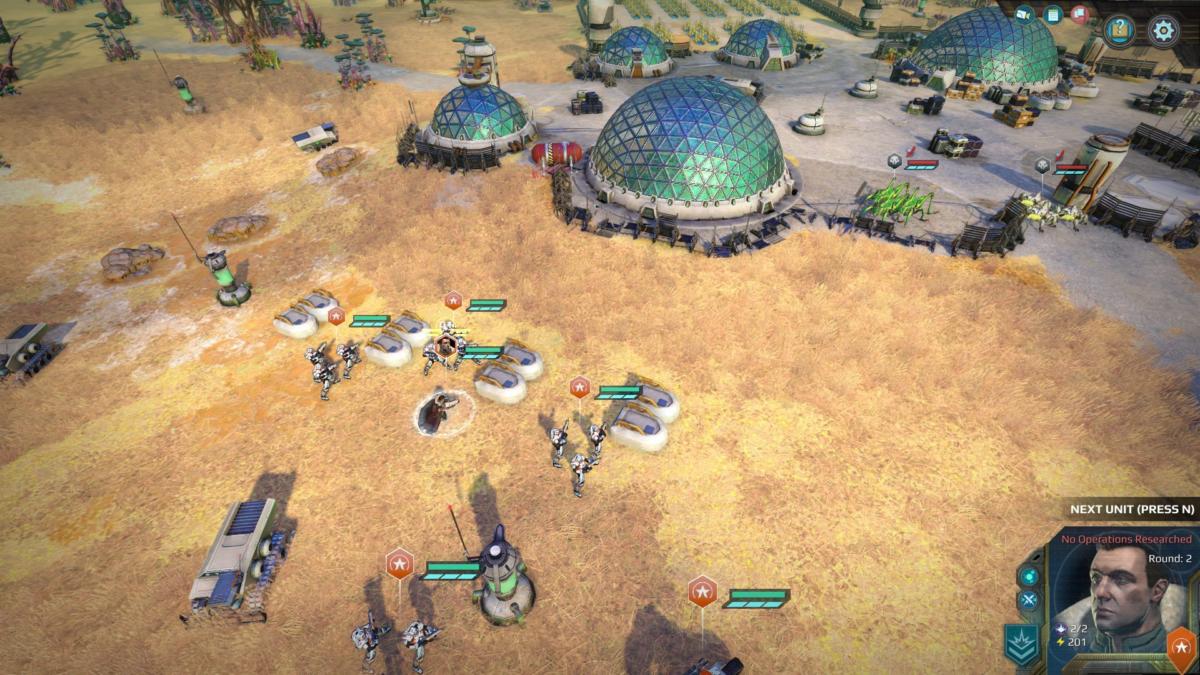 Pull back a bit though, and I’m having a hell of a lot of fun with this space-faring strategy/tactics mashup. I know the flaws are there, I can enumerate them for you—and will, later on. But I’ve played 15 hours of Planetfall with no signs of slowing, in spite of the flaws.

That’s two-and-a-half campaigns, for the record. And I like that aspect most, I think! I like that I’ve been able to play multiple campaigns in the span of 15 hours. Story-driven strategy games are popular right now, but normally I feel like I’ll never see half of what they have to offer. Total War: Warhammer II is wonderful for instance, but I don’t have 20 to 30 hours to dedicate to each of its myriad campaigns. I just don’t.

Planetfall keeps it brief. I still won’t see half what it has to offer probably given there are 13 campaigns at release, unlocked in sequence. It’s a daunting amount of game, even averaging a mere seven hours per campaign. 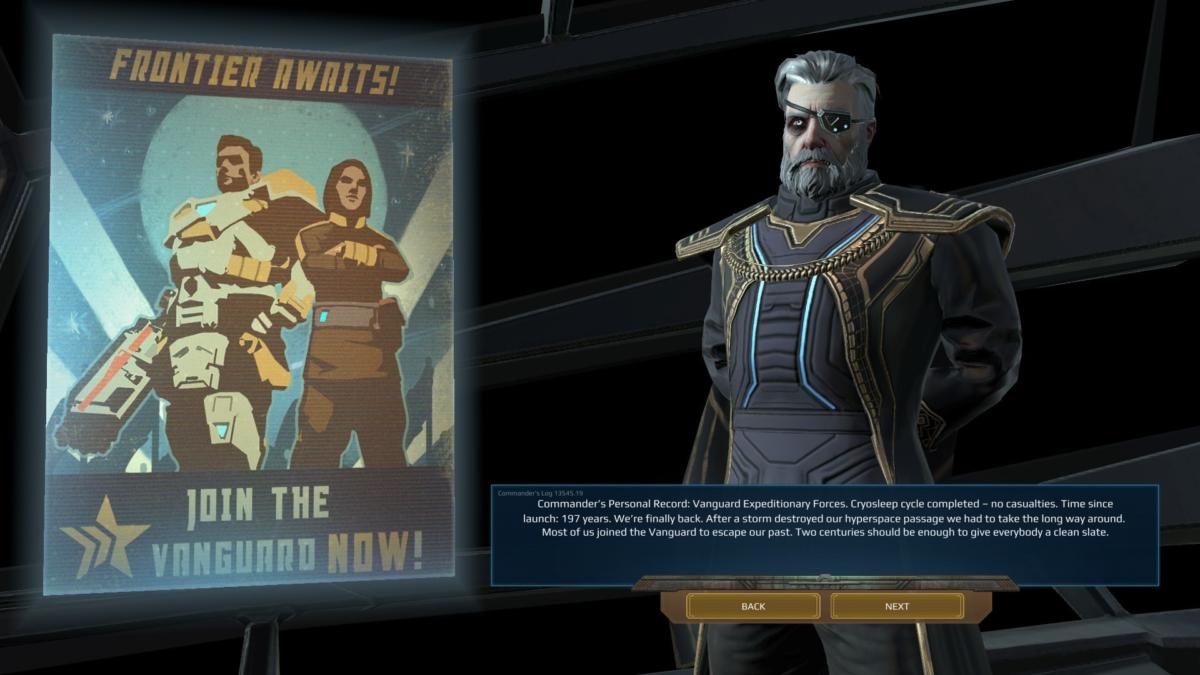 The ones I’ve finished, I’ve enjoyed though. They’re a creative pastiche, blending classic science fiction and pulp adventure novels to fill out the corners of this universe with recognizable tropes—and yet the familiar bits are smashed up against other familiar bits in surprising ways. Even the blandest faction, the introduction’s ex-imperial Vanguard, have this “200 years in cryosleep” hook, a very Forever War premise.

Planetfall ‘s strength is delineating between factions—and not only in writing. Sure, it happens there as well. The Kir’ko were the former slaves of the empire, and thus have a rather more dismal view of the fallen Star Union than the idealized home the Vanguard are trying to restore.

It happens on a mechanical level too though, arguably the harder trick to pull off. The Vanguard are ranged soldiers and drones, space marines. The Kir’ko are insects, a ravenous hive that demands ever-more food but turns out cheap soldiers in return. And while their reliance on melee attacks puts them in harm’s way more often, they also gain the ability to regenerate health early in the tech tree. 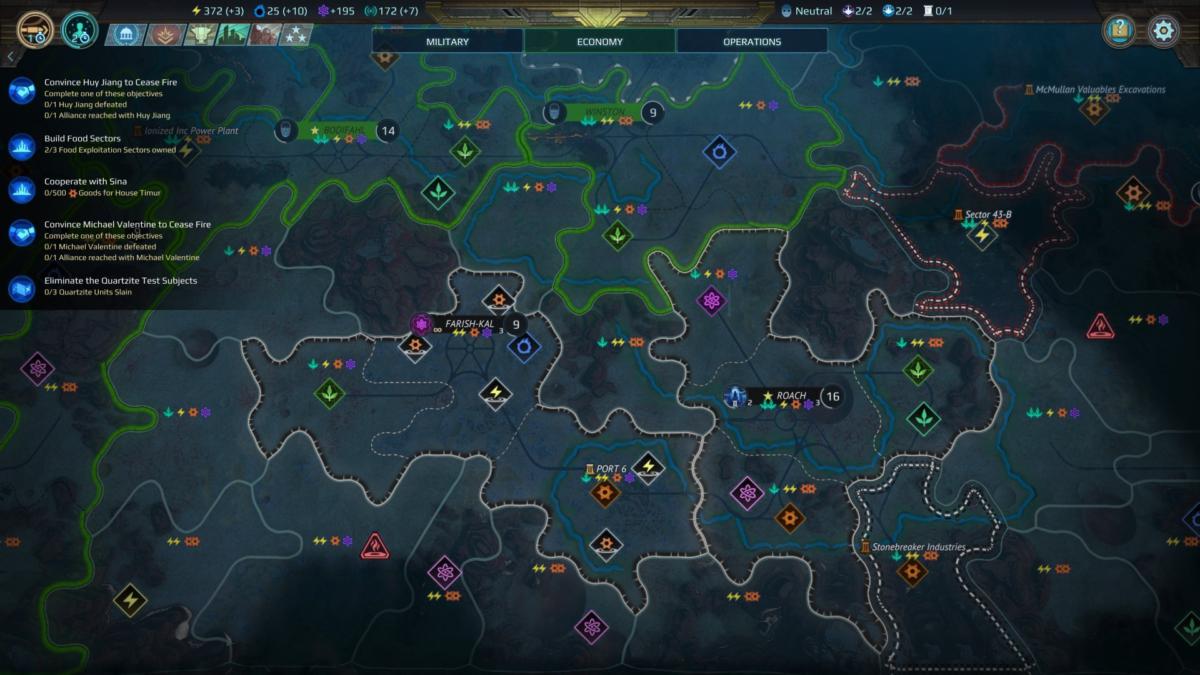 I’ve barely gotten to toy around with Planetfall’s four other factions, and only in the story-less Scenario mode. Thus I can’t speak to the strength of the character writing. They seem equally interesting though, again showing the range of influences Planetfall drew from. The Dvar are essentially space dwarves, complete with gas-mask “beards” and a love of mountains. The Amazons, which I played in our preview earlier this year, get to use dinosaurs. The Syndicate is focused on trade and covert ops.

The sixth and final faction, the Assembly, is the faction I’m most curious about. I’ve barely touched them, but they’re all cyborgs, and their gimmick is that some of your troops come back to life after battle. To me, the Assembly perfectly illustrates Planetfall’s strength, which is coming up with experimental 4X ideas and implementing them in a way that makes thematic sense, that’s couched in the lore of this universe.

It’s kept me playing. Planetfall does little to evolve the genre, but the writing is solid enough to give the same ol’ strategy game some structure, some manageable goals to propel the player forward and keep them invested. It’s hard to understate the effects, as I’ve found myself actually caring about the characters here, feeling disappointed when I lose a commander and they’re cut from the story, and proud of units who’ve stuck with me for an entire campaign. 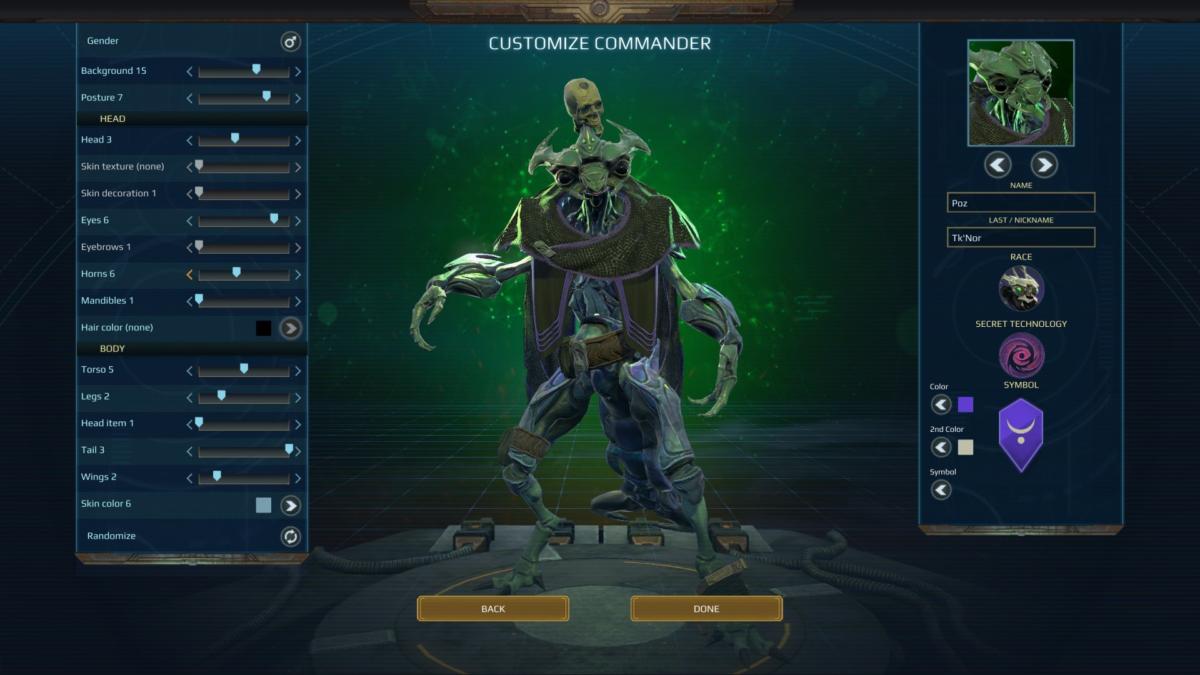 The character creation tool plays a significant role in that as well. You can fully customize the leader of your faction, even for campaigns—change their hair, their face, their clothing, any accessories. The options are limited, but I still noticed characters felt more “right” to me after I’d swapped components out. It got me over that first hurdle, helped me bond with what are usually personality-light archetypes in other strategy games.

I know you’re waiting for the “…But” though, the issues I hinted at above. And there are a litany of them.

Some are campaign-specific, and those seem hardest to fault because they’re part-and-parcel with elements of Planetfall that I like. The default maps are small-ish and the stories are tight, with little geographical or narrative fluff. The downside? It sometimes feels too directed, like you’re merely sending an army from waypoint to waypoint and ignoring whatever else is happening with your opponents. You can also accidentally end a campaign early by completing certain win conditions, thus cutting yourself off from parts of the story you’d left untouched. 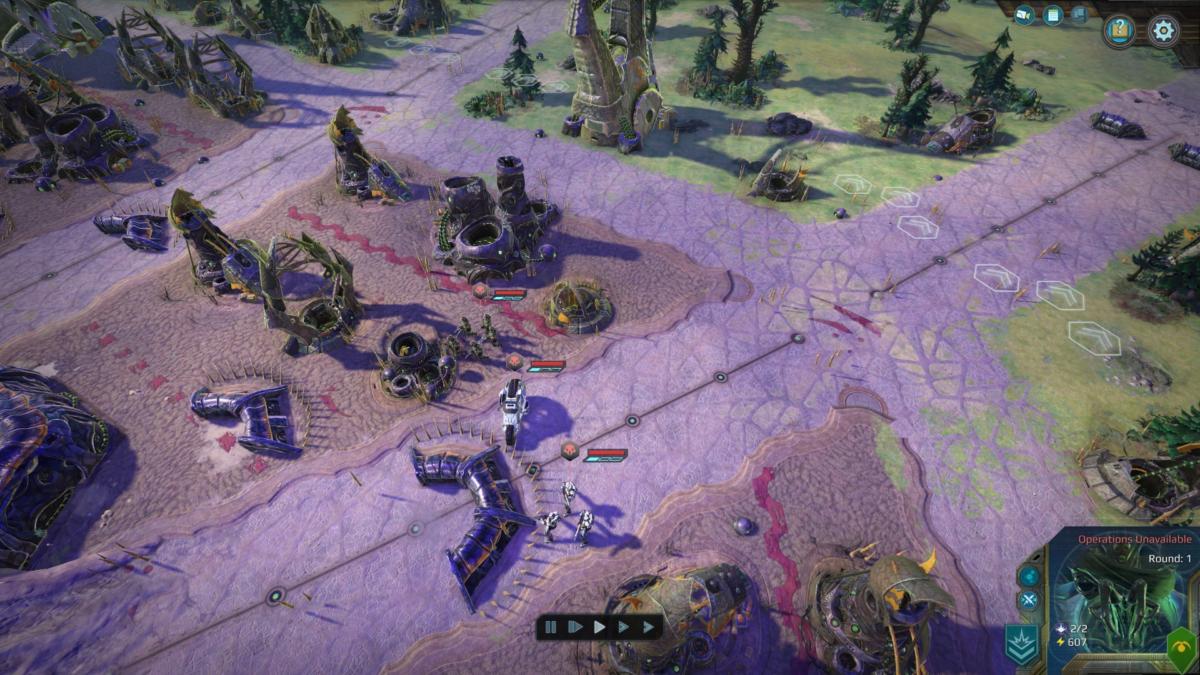 And since you’re starting a new campaign and a new faction every few hours, you spend a lot of time playing the beginning of campaigns. I don’t know if this changes later on, if the end-game campaigns start at a more advanced state, but it’s a bit tedious to start from scratch every time, especially the early-game research paths.

Speaking of which: Tech trees are a particular pain point in sci-fi and fantasy strategy games, and Planetfall suffers the same asTotal War: Warhammer, Civilization: Beyond Earth, Endless Space 2, and so forth. The problem is you just don’t know what the hell anything does. When you play a history-themed game like Civilization, you understand intuitively what researching “Paper” unlocks. But in Planetfall, you’re stuck meticulously mousing over every single entry to figure out whether you should research Heavy Laser Applications or Foreboding Darkness or Protective Grounding or what.

Those technologies are all available on the first turn in certain campaigns, by the way. These aren’t some arcane late-game techs. These are your introduction to Planetfall.

And that’s the problem, really. Planetfall, like Age of Wonders III before it, is dense, and it doesn’t do enough to onboard new players. 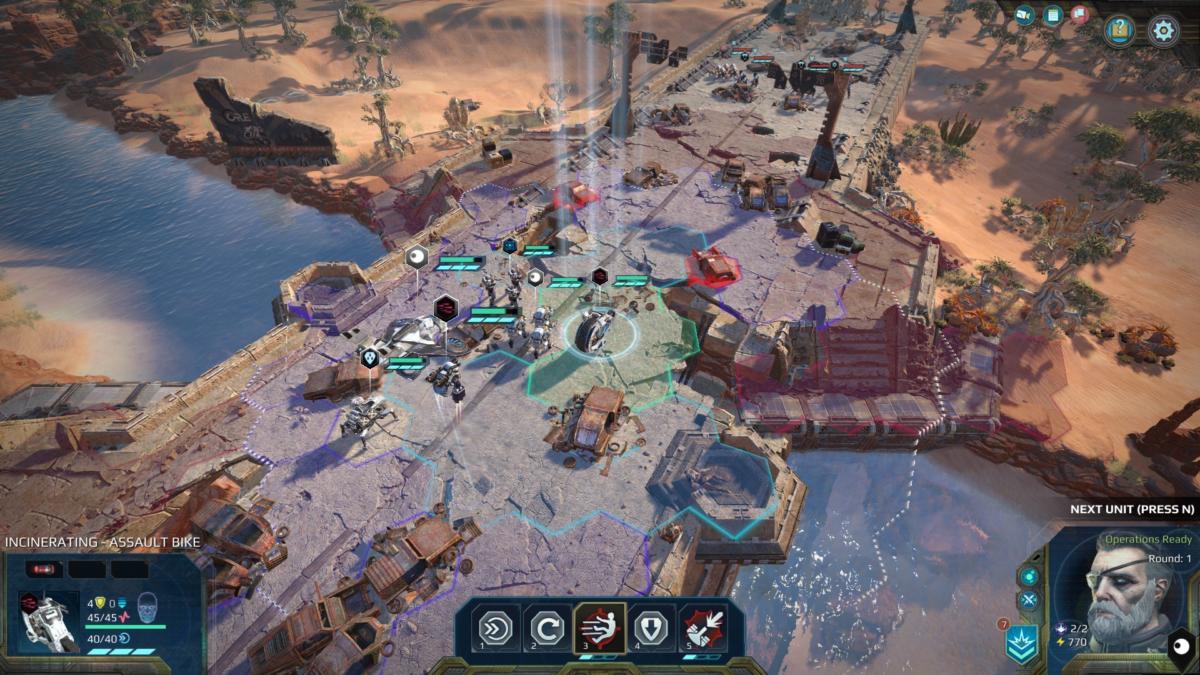 There’s a tutorial campaign, but it mostly covers the absolute basics—movement, basic tactical combat, founding a second city. There’s also a contextual assistant, which provides early-game guidance. The advice is spotty though, and it still doesn’t do enough to encourage players to plow through Planetfall’s mountain of menus.

“Operations,” for instance. Unlocked through the tech tree, for a while I thought I was simply nabbing permanent upgrades for my faction. That’s how research works, right? Then I realized all these upgrades were only hypothetical, and had actually been dumped into the Operations menu, and that they required further buy-in to activate—with a limit on how many could be active at any given time. 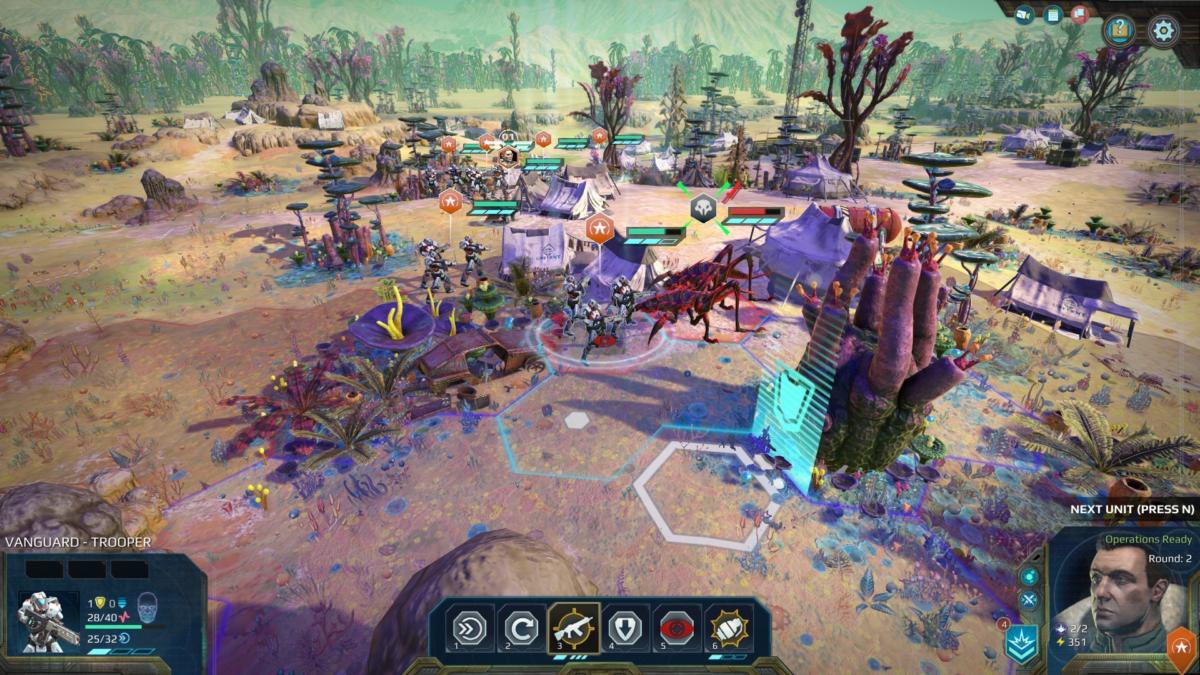 All this makes the tech tree even more difficult to parse. The labels for Strategic Operations, Tactical Operations, equipment, buildings—all the different categories of stuff you can unlock—aren’t very eye-catching or unique, and many times I started researching what I thought was a game-changing technology only to realize it was borderline-useless to me.

Accessibility is the issue. Operations give the player a lot of options and a lot of flexibility, which is an objectively good thing, but only if the player knows about it and can use the system to their advantage. There’s a tutorial text early on, and an occasional reminder to check in on available Operations, but it’s still all-too-easy to neglect that menu, at your own peril.

More options also generally means more micromanagement, another issue Planetfall struggles with. For instance, every unit can be upgraded, which I love because it means your starting army’s Troopers are just as viable five hours in as they were at the beginning, given the right equipment. It’s one more hurdle though, one more menu to painstakingly pore over. Are you losing because you don’t have the right composition of troops? Or because you haven’t unlocked advantageous unit mods? Or are you just bad at tactical combat?

There are so many variables, it can be hard to tell sometimes. 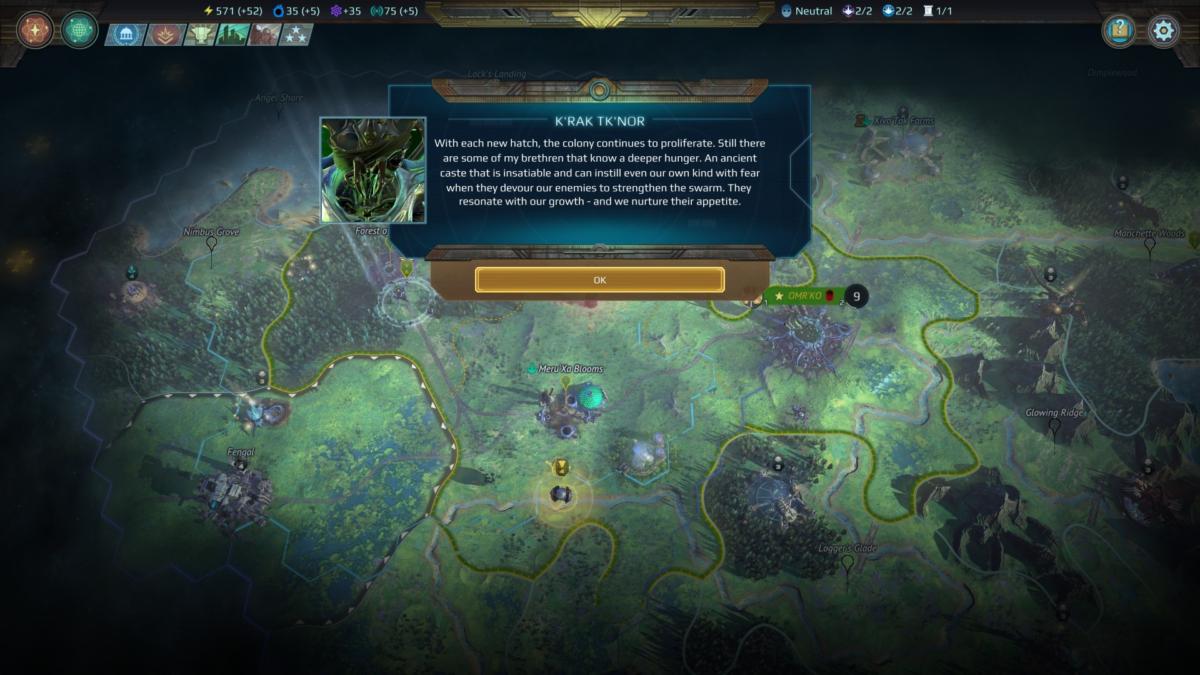 And while I like Planetfall’s combat, it has a particular sweet spot that often disappears in the late game. Planetfall’s tactical battles draw in units from the central hex plus the six surrounding hexes, for a maximum of 42 units per battle. This doesn’t happen often, but when it does it’s a slog. Even two or three armies per side can be tedious, slowly moving each individual unit into cover, setting each of them into Overwatch. In larger battles, a single turn can take upwards of minutes to prep, and I occasionally found myself turning to the Auto-Resolve option even when I didn’t want to, just to save some hassle.

Finally, diplomacy. It’s the Achilles heel for a lot of strategy games, and Planetfall is no exception. Planetfall adds a casus belli system wherein settling a new colony or taking over land that another faction lays claim to—even if they haven’t settled it yet—gives them reason to go to war with you later. It’s led to some bizarre behavior in my campaigns, with the most annoying being that I secured an alliance with one character only for him to break the alliance the very next turn and claim I was the aggressor. Why? Because I’d annexed one disused province near him.

What a greedy bastard. I wiped him off the face of the planet.

Age of Wonders: Planetfall has its issues. I confess I haven’t cared very much though. The jank is usually a result of over-ambition, of Planetfall trying to let the player do too damn much where another game would’ve gone for a simpler (or “more elegant”) solution. I can’t fault Triumph for that, even if the holes are obvious when listed out.

I’m already looking forward to my next campaign. I may never make it through all 13, but I’m going to try my best with what little time I have—at least until I get to play as the Amazons and their dinosaur soldiers, right?