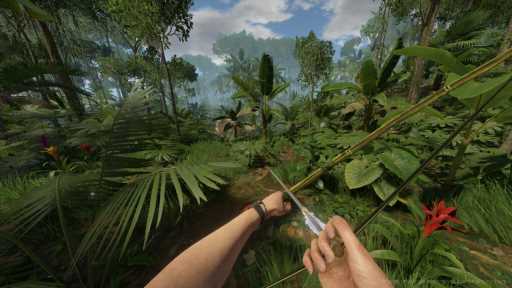 Incuvo began teasing the first details for Green Hell VR at the end of 2020, handling the Oculus Quest and PC VR ports of Creepy Jar’s open-world survival adventure Green Hell. Over on Green Hell VR’s Discord channel, Incuvo has been dropping new screenshots from both versions, if you’ve not seen them yet take a peek below, as they’re looking good.

These are all the screenshots the developer has released over the past several weeks, giving a great indication of where development is going and what players on each platform can expect. Naturally, the PC VR images stand out the most, showcasing a rich jungle teeming with life and plenty of detail in the foliage. The dark, rain socked screenshot is certainly the most striking, highlighting the various weather systems players will experience.

As for the Oculus Quest screenshots, they still look very good considering the performance limitations of the headset. The jungle is fairly well packed with plant life and with more detail than other Oculus Quest titles set in the jungle. However, Incuvo has yet to reveal any gameplay footage from Oculus Quest at this time – it’s all been from the PC VR version – so there’s no indication of how well the videogame runs. Titles like A Township Tale have made their way to the standalone headset yet they do suffer from noticeable pop-up, so it’ll be interesting to see how Incuvo deals with this problem.

The port is in good hands considering the studio’s back catalogue of ports. Incuvo has previously worked with Bloober Team on Layers of Fear VR and the rather scary Blair Witch: Oculus Quest Edition.

Green Hell VR aims to capture all the fraught survival gameplay of the flatscreen original just with all the immersive features you’d expect from a virtual reality (VR) title. Set within the Amazon rainforest you’ll get to explore this wild, untamed land filled with everything you need to survive as well as plenty of things that can kill you. You’ll be able to hunt wildlife with bows and spears, protect yourself from dangerous predators and encounter hostile local residents.

While the original Green Hell does feature co-op multiplayer, at this time Green Hell VR is a single-player experience. But Incuvo has said it aims to add multiplayer in the future. What won’t happen is crossplay between the VR and non-VR versions, with the team noting on Discord: “Yeah, we can’t see any possible way to do crossplay atm.”