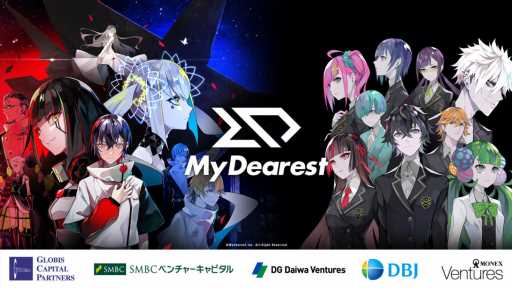 Japanese developer MyDearest, best known for its two virtual reality (VR) visual novels Tokyo Chronos and Altdeus: Beyond Chronos has announced the successful completion of a new funding round this week. This saw the studio close an $8.2 million USD (900 million yen) Series B funding round to help continue building new VR adventures.

The round was led by Globis Capital Partners, a Japanese VC firm, alongside DBJ Capital and DG Daiwa Ventures. This has brought MyDearest’s total funding to date to $11.1 million (1.2 billion yen). MyDearest has said this new investment will be used to expand its team whilst developing an online fan community for its growing videogame roster.

“The serial successes of our games, and the expansion of the VR market thanks to Oculus Quest 2, have allowed us to close one of the largest funding rounds ever for a Japanese VR game company,” said Kento Kishigami, CEO of MyDearest in a statement. “Our fans have lauded us for our powerful storytelling, and we intend to complement that strength by further evolving the gameplay and interactivity of our games, appealing to an even wider audience. MyDearest will serve as the vanguard of Japanese VR game developers making an impact in the global market.”

Founded in 2016, by Kento Kishigami, Yosuke Kori, and Shotaro Chida, the team’s first title was Tokyo Chronos (2019) following a group of eight students who suddenly wake up in “Chronos World”, a sort of mirror world based in Shibuya, now an empty, deserted district of Tokyo, Japan. Described as a visual novel, the interaction was limited as you mainly followed the story with Japanese voice acting and English subtitles.

2020’s Altdeus: Beyond Chronos was the sequel, set 200 years after the events in Tokyo Chronos. The follow-up was a far more advanced adventure with greater interaction and a multitude of decision points to vary the story and endings. This time the world has been decimated by an alien race called the Meteora with humanity now surviving by living underground. But there is a way to fight back, using giant mechs called Makhia. The narrative puts you in the shoes of a Makhia pilot, being able to control giant rail guns or huge swords.

As MyDearest expands the team and when it reveals its next VR project, VRFocus will let you know.