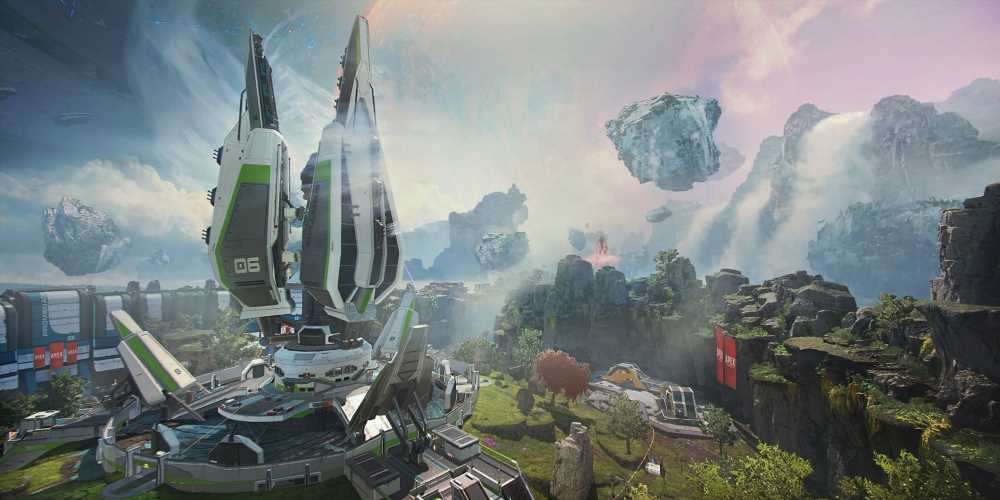 Apex Legends Season 15: Eclipse is upon us, and we’re finally getting the game’s fifth battle royale map. Broken Moon has been teased for a while now – including with a whole Arenas map already set there – and will undoubtedly weave in Seer and Catalyst’s stories over the next few months.

TheGamer got a glimpse at the new map ahead of its release, and chatted with its designers in a roundtable interview. They explained their design inspirations, the new zip rails that will change fights and rotations, and how they’re dissuading players from hotdropping.

“We wanted to make sure [Broken Moon] was something that people could spend hours in, but wasn't going to get too oppressive or depressing because a moon could be kind of barren and dry,” says Ed Agostini, Apex Legends’ world director. As such, they added plenty of inhabited areas. Lore-wise, these are buildings and workplaces where terraformers are working to save – or profit from – the moon, Cleo. As well as helping the lore, it makes gameplay more interesting too, rather than fighting across a whole map of meaningless grey rubble.

The designers also wanted to represent the dark side of the moon, a famous concept of the unknown that lies beyond Earth’s perception of our own satellite. As such, Broken Moon is effectively split into two parts, one dark and one light. One Heaven and one Hell.

“With Heaven and Hell, we have the beautiful side that we have inside, which was inspired by Monet paintings.” Agostini explains. “And we were always looking at that kind of pastel soft look with pink skies and lily pads. You'll find a lot of that in our you know, bionomics section near the atmosphere factories. So there's quite a bit of that lovely side that contrasts that hellish kind of barren, darker side.”

These interiors – and some exteriors – stand in stark contrast to the moonscape outside. But it’s not just French impressionism that has inspired Cleo’s design.

“Boreas [the planet that Cleo orbits] itself is very much a dominant African culture. We've seen that in Seer’s lore trailer, so we wanted to make sure we still have those connections, we see some of that in the Eternal Gardens POI, we see it inside the homes of the people that live there, they bring some of that culture with them. So we try to sprinkle that [in]. And then we also have a lot of inspiration with the Monet paintings and the English gardens, so very floral kind of meadows that you can find. It's quite a contrast.”

The team at Respawn has been working on Broken Moon since Season 8, about 18 months ago. They wanted the map to feel unique, and the contrasting design influences are just the start. When it comes to gameplay, the map is smaller than Storm Point (it’s “slightly larger than World’s Edge”), but the POIs are generally bigger than those we’ve seen before.

“We really wanted to give squads a chance to go to a POI but get a little bit more comfortable,” says Jeff Shaw, Apex’s lead level designer. “And so having a larger POI results in squads having more landing options, there's a little bit more space to share, and more material or loot to gather. And so this often gives squads more time to loot and more time to make proactive decisions about engagements.”

He explains that the decision to include multiple large POIs is intended to “reduce hotdrop dogpiles” like you see in Fragment on World’s Edge or The Mill on Storm Point. Whether this philosophy will work remains to be seen, but multiple huge POIs will create interesting early fights and a wealth of tactical options to explore.

Perpetual Core, The Foundry, and Terraformer look like the biggest POIs, and the latter strikes me as where people will like to drop hot, despite Shaw’s assertions. Terraformer is a tall, looming structure at the centre of the map – comparable to Harvester, except bigger – and apparently accommodates four teams comfortably. I imagine we’ll see two or three times that many people land there, which means the game’s new zip rails may be key to dispersing the crowds.

Broken Moon has just one Jump Tower, located in Eternal Gardens, so zip rails will be the primary way to reposition, rotate, and third party on the new map. They’re like regular ziplines from Apex’s first four maps, except you move faster and they can bank around corners. Initially, they remind me of the Sky-Lines from BioShock Infinite. Your accuracy is still impacted when riding them, but they seem to offer quicker routes in, out, and around POIs than their straight-and-true cousins. Whether you want to take a fight after you’ve looted up or quickly back out of a heavily contested area, these will be key to grabbing the win next season.

With a map smaller than Storm Point, but with bigger POIs and quick routes in and out of them, this could be the most action-packed battle royale arena in Apex’s history. There’s a fine line to tread, though, between the constant third parties on small maps like Kings Canyon, and the long slogs to the zone on big maps like Storm Point. It seems that Broken Moon is leaning more towards the former than the latter, but balance is crucial for the map to be an effective and exciting location.