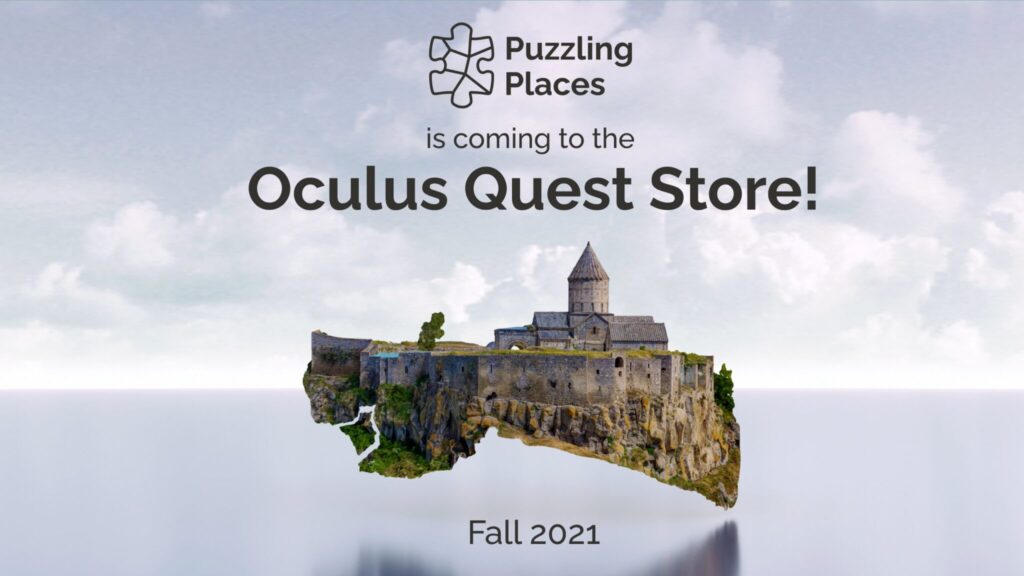 Realities.io’s Puzzling Places virtual reality (VR) jigsaw title is going from strength to strength in 2021. Having originally started as a SideQuest title in 2020 the videogame was one of the first to arrive for Oculus’ new App Lab a couple of months back. A PlayStation VR announcement followed in March and today the studio has revealed Puzzling Places will be an official Oculus Store title later in the year.

In a Tweet, the team confirmed that: “Puzzling Places is accepted to release in the Oculus Quest Store!! We’re targeting to launch this Fall!” This makes it one of the first App Lab titles to confirm a transition to the official store, enabling it to be more easily found by Oculus Quest owners looking for puzzle videogames.

The current App Lab version has six puzzles of varying difficulties to complete, from the basic ‘Ice Cream Stairs’ consisting of 20 pieces all the way up to Market Square in Gliwice and Tatev Monastery which both contain 200 pieces. But there are more available through Realities.io’s Patreon with a total of 38 jigsaw puzzles. The studio hasn’t said if the Oculus Store version will add more content or features but that’s highly likely. For the PlayStation VR announcement, Realities.io did mention there would be more content as well as a multiple difficulty feature for each jigsaw.

Great if you’re after a fairly casual, laid back VR experience, Puzzling Places‘ jigsaws are all in 3D. Consisting of a varied assortment of pieces, each puzzle is a hyper-realistic miniature of a real-world location which have been scanned and created using photogrammetry. You’re given several 2D images of the location taken at different angles to aid in piecing it all back together. As you do so the puzzle is brought to life thanks to audio record at the location, further immersing you in the experience. Some of them like the Tatev Monastery even have an internal scan so you can step inside the puzzle.

Puzzling Places is one of a growing number of Oculus Quest apps benefiting from App Lab, with more and more added each day. The transition to the main store isn’t as easy but this process should become a more current occurrence as the year progresses. In the meantime, Oculus Quest owners have the v28 update to come, adding Air Link, 120Hz support and more.

VRFocus will continue its coverage of Puzzling Places as further improvements are made, reporting back with the latest updates.