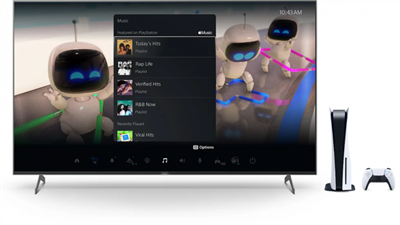 A colossal player in the realm of music is making its app debut on PlayStation 5 today. You may have heard of it. It’s a little service called Apple Music.

Announced on the PlayStation Blog today, the release of Apple Music on the PS5 makes Sony’s flagship gaming device the very first console “to introduce an integrated Apple Music experience.” You’re not limited to just the collection of music you’ve purchased over the years. The app features all of Apple Music’s music curation, playlists, and radio stations, but sadly doesn’t include podcasts. Here’s what users can expect from the Apple Music app:

All of the music can be listened to in the background while playing games, so if you want to turn a game’s music down and make your own playlist, in a way, you can. Or by finding the Music Function card on the PS5 Control Center, Apple Music subscribers can “find recommendations that match the game they are currently playing, or choose from a playlist in their library or other Apple Music-curated playlists for gaming.”

Maybe the most impressive tech, but firmly in the “I don’t know when I’ll ever do this” basket, is seamless music video playback. This feature lets you watch music videos in the Apple Music app and seamlessly switch over to having that same music running in the background of a game. The impressive part is that it works the other way around by going from background listening to watching the music video, picking up exactly where you’re at in the song.

If you’re an Apple Music subscriber and happen to own a PlayStation 5, the app is out now to download and listen to music to your heart’s content. If not, there’s still the Spotify app to fall back on.