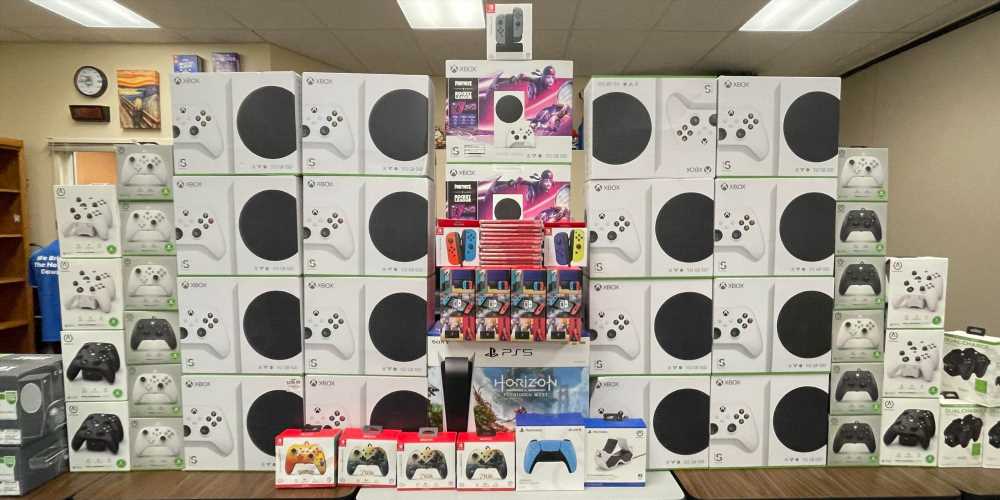 Back in the 1990s, it would've been highly novel to see a games console in a school, although playing some games on the crusty school computers is a fond memory. But times are-a-changin' and some schools and students are lucky enough these days to play video games for homework.

On Reddit, one enterprising English teacher has been showing off a huge haul of consoles for their lucky English class. The teacher explains that they're teaching a 'Video Game as Literature' class this fall and has acquired a number of Xbox Series S' for the class as well as Nintendo Switches, and a PlayStation 5. Now that's a bunch of lucky students.

"I'm going to teach lessons based around specific games on the other systems too. For instance I want students to play The Stanley Parable on the PS5, and each take turns playing one after the other to see different results. I want to have them play the Switch and discuss how controllers affect storytelling, and cooperate together to solve problems. It's going to be a blast," they wrote, posting under the alias AnonymousCerealBowl.

The OP is still working on the exact syllabus, and explained elsewhere that their local Walmart had the consoles readily available with the Xbox Series S console not hard to find, although the PS5 was harder to come by, which explains why there's only one in the picture. "I'm still amazed my school district is allowing me to do this, and I'm so excited to be starting this journey proving more than Minecraft can be in the classroom!" they said.

The class will involve students playing a variety of shorter games, and some of the "best levels" of specific titles. The English teacher plans to play as many Game Pass games as possible over the summer while researching writing activities and analysing narrative plots in the games. They're planning to look at "tragic heroes, unreliable narrators, any literary devices" among others.

AnonymousBowlCereal has posted their plans on a variety of subreddits, but it's in r/gaming that has inspired the most comments and views, generating more than 63,000 upvotes at the time of writing. It has also generated debate, with some commentors questioning the use of school resources, while others speculate that the teacher is at a private school. Others though have been more helpful and suggested titles for the teacher's syllabus. Games mentioned by commentors include Disco Elysium, Life Is Strange, Firewatch, and What Remains of Edith Finch, among others.

AnonymousCerealBowl said they're in "complete class creation right now" so those curious can't get a look at what students will be learning and exploring quite yet, but the OP has promised that "once it's done and ready" they'll share. But it's good to see video games being studied as the highly creative, literary, and political medium it is.