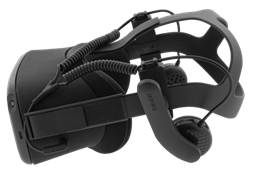 Bionik is planning to release the Mantis VR headphones for Oculus Quest 2 this summer.

Mantis VR is a set of detachable over-the-ear headphones designed to fit most VR headsets, with the latest update to the accessory planned for release this summer online and in some physical stores. They sell for a suggested price of $59.99, and we tested the Mantis VR headphones for PlayStation VR back in 2017. The accessory is pitched as having “a universal clip and cable assembly enabling compatibility with most popular VR platforms,” but the Quest 2 ships for $299 with a soft fabric strap, so we’re curious how the device will attach firmly to the headset.

We reached out to a representative of Bionik, and were told the kit ships with adaptors for the traditional Quest 2 strap. However, if you’re using either official Elite Strap, you won’t need those adaptors. Bionik wasn’t able to send us images of how the headphones look attached to the device with either strap, though.

We considered Mantis VR for PSVR an essential add-on but, then again, PSVR itself has no onboard audio solution. That’s not quite the same with Quest 2, and there are a lot of alternatives for the headset, so we’ll be interested to see how this offering stacks up against them.

Bionik is also planning a replacement face pad for Oculus Quest 2 as well for $14.99. That’s also coming this summer and the company says it offers a “soft, absorbent face pad that has increased airflow and breathability”. We’ll hopefully be able to bring you impressions of both later this year.