Beyond Light arrives in November, and with it comes a whole new way to play Destiny 2. The Darkness is giving Guardians the power of Stasis, the cold element. But Stasis is more than just freezing out your opponents. It’s the element of control, of throwing up giant frozen walls to keep enemies out or helpless foes in. Or to just hop up to a ledge that was previously out of reach.

Stasis is also bringing a bunch of fancy new subclasses to each of Destiny 2’s main classes, and we just got our first in-depth look at the new Warlock subclass. Called the “Shadebinder,” this subclass seems to be all about wide AOE freeze spells and summoning a big glowy staff to send out frost bolts.

The two abilities showcased over on Bungie’s update are Penumbral Blast, which is the Warlock’s new melee ability, and the new super ability called Winter’s Wraith. Penumbral Blast seems to be much like the Solar subclass’s Swift Strike melee, but with cold instead of fire. Frost bolts shot from the Warlock’s fingers will freeze targets solid making them vulnerable to being shattered.

Winter’s Wraith is a two-part super ability. First, the Shadebinder summons the Stasis Staff and sends out bolts of Stasis. Frozen enemies are then shattered by the Shatter Shockwave that is unleashed when the crystal in the staff detonates.

Bungie also gave us a peek at a brand new customization system for subclasses. Called Aspects and Fragments, these are in-game items that can be slotted into a character via a new menu that can provide new active and passive abilities. 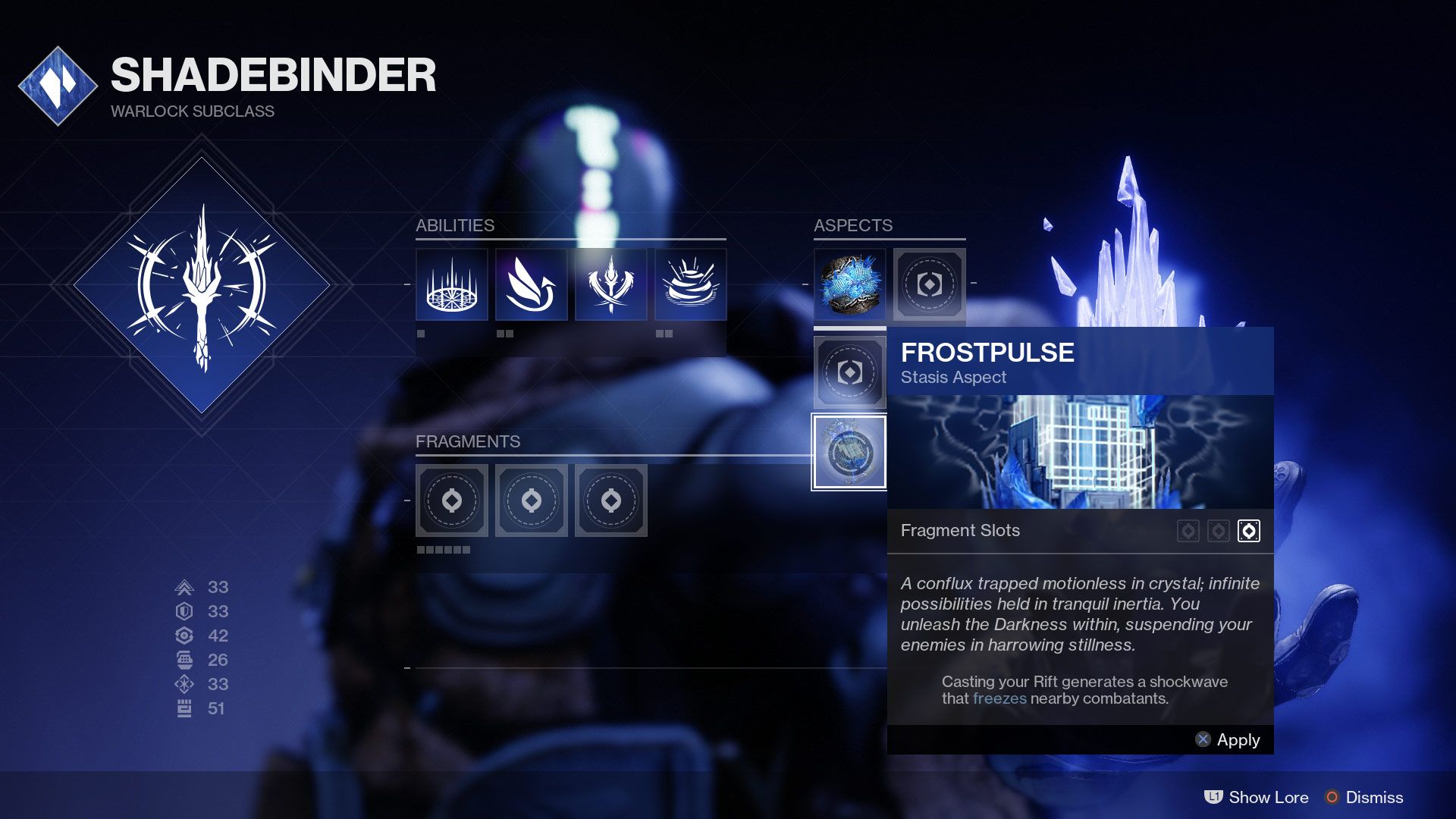 For the Shadebinder, Bungie gave us the Frostpulse Aspect, which sends out a freeze shockwave whenever the Shadebinder uses its Rift ability. The Whisper of Bonds Fragment can then be slotted on top of the Aspect in order to give the Shadebinder super energy whenever a frozen enemy is shattered but at the cost of -10 Intellect and -10 Discipline.

Aspects are unique to each Stasis subclass, but Fragments are not. This means you can take your Fragment to use on any of the three new subclass Aspects you find.

Bungie will reveal the new Titan Stasis subclass tomorrow and the Hunter subclass next week. Stay tuned for more.