Before the slick bells-and-whistles of the modern graphical user interface (GUI), the humble command line interface (CLI) ruled the roost — purely text-based commands typed via a keyboard to communicate with the operating system.

But even in a world now dominated by fancy GUIs, command lines remain a popular option for developers. It can be a lot quicker (for those who know the commands, at least), while it also consumes less memory and computing resources than GUIs. Microsoft even launched a new application for command line users last year called Windows Terminal.

And it’s against that backdrop that Charm is setting out to apply “modern product thinking to one of the original forms of human-computer interaction,” as the company puts it — it wants to make the command line “glamorous.”

Charm was founded in 2019 by Toby Padilla, a former engineer at Apple, Last.fm, and TweetDeck; and Christian Rocha, formerly head of voice at Snap-acquisition Zenly. In a nutshell, the company is developing next-gen CLIs fit for the 21st century, with tools to improve the visual appearance and store data such as user profiles.

To help, the company today announced it has raised $3 million in a round of funding led by Cavalry Ventures.

Charm currently has three products on the market, including an open source terminal-based markdown reader it calls Glow, which enables developers to view documentation such as readme files directly on the command line. It also renders the markdown to make the text easier to read, and allows users to build a private, encrypted library of documentation.

A typical use-case here might involve a developer who has cloned a project from GitHub, and who can run Glow in the project directory to discover all the documentation for that project.

“The developer can read that documentation and / or stash it for later reference on this machine, or any other machine linked to their Charm account,” Padilla explained.

As an open source tool, Charm tacitly acknowledges that most of the tools that contain markdown documentation are open source, and command line aficionados have a “strong desire to use open source software,” said Padilla. “It also allows Glow to be bundled and distributed with other open source tools, like Linux distributions and package managers. Since the majority of our users are developers, being open source also helps with adoption.”

Elsewhere, Charm also offers a command-line-first account management tool called Charm, which leans on SSH (secure shell) keys to create an invisible account system. “This means that on first-run of any software built with Charm accounts, users are not prompted to create an account,” Padilla said. “It happens invisibly behind the scenes, thus lowering the barrier of entry to using any tool built with Charm.”

And then there’s Charm Cloud, which offers a suite of online services spanning identity, authentication, data storage, and encryption. It is a little like Firebase or Parse, except “focused on the command line as a platform,” Padilla said.

The story so far

Charm initially launched Glow in late 2019, though in its original guise it only displayed documentation — it didn’t allow a user to stash or build a private library. Then in October, the company introduced Charm Cloud alongside a new version of Glow, replete with Charm Cloud integration.

Additionally, Charm has open sourced a bunch of libraries and tools it used to make Glow and Charm, such as Bubble Tea, Lip Gloss, Termenv, Glamour, and Bubbles, each designed to encourage an ecosystem of products built on Charm’s technologies.

Glamour, for example, offers stylesheet-based markdown rendering for CLI apps, and GitHub has already integrated this into its official command line tool, according to Padilla. 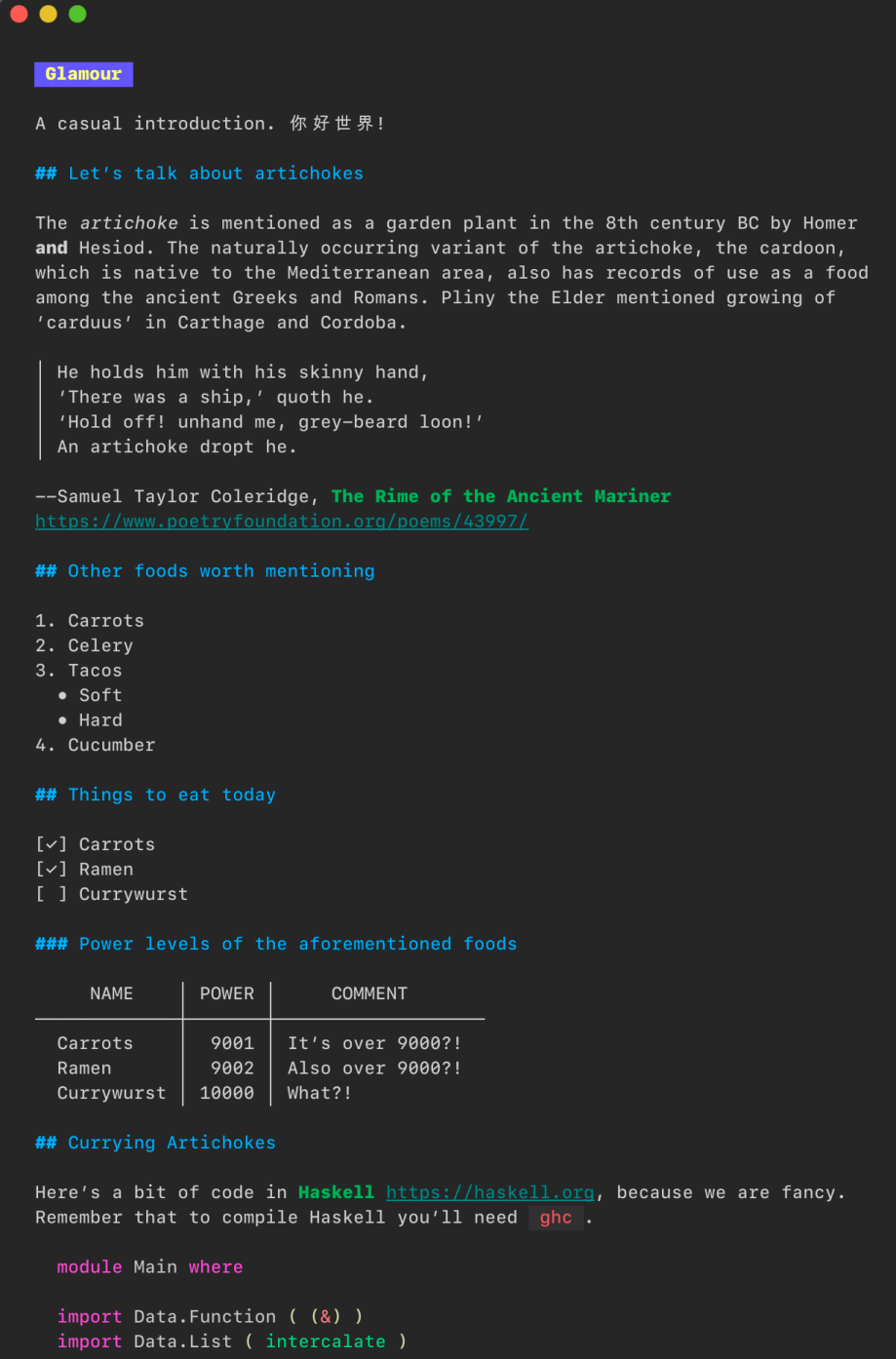 Charm’s suite of products are currently free to use, and the company plans to keep it that way for “basic non-commercial use.” However, it intends to charge for enterprise-grade solutions and perhaps resource usage on individual accounts — “for example, if you need to store more than the free limit of data,” Padilla said. “Our business model is selling developer experience solutions built on our suite of products to enterprises.”

Looking to the future, Charm is also planning to launch an open source self-hosted version of Charm Cloud, which will be free for non-commercial use.