Financial planning and analysis (FP&A) is a long-established discipline that enables businesses to inspect their financial and operational data, benchmark where they’re at, and forecast what’s around the corner. But despite the advent of the cloud and countless software products designed to aid the FP&A process, companies still often find themselves in a spreadsheet death spiral, involving copying and pasting data across documents, and performing error-prone manual data transformations.

The problem, ultimately, is that data typically lives inside lots of different systems, while the myriad of people inside a company that need access to FP&A-enabled insights work in their own microcosms. It’s a recipe for chaos. This is where Abacum is setting out to help, with a cloud-based FP&A platform built specifically with remote collaboration in mind.

Founded in April 2020, YC alum Abacum wants to “simplify” FP&A for scale-up companies such as Typeform, with pre-built connectors for most of the major systems that finance teams work with, such as Netsuite, Gusto, Salesforce, Looker, and Google Sheets. Rather than replacing these various software systems, Abacum serves as a data integrator that sits on top, accessed via a standalone web-based interface.

“Our goal is to provide teams with a smarter and more intuitive solution that can adapt and grow with a company as they continue to evolve,” Abacum cofounder and CEO Julio Martínez told VentureBeat. “Abacum was designed to be a fully collaborative tool that helps finance teams work with other stakeholders in the financial planning process.”

To aid it with bringing its technology to more companies, Abacum today announced that it has raised $25 million in a series A round of funding led by European venture capital (VC) juggernaut Atomico.

The inner workings of revamped financial planning and analysis

With Abacum, users can manage and synchronize all their financial and operational data from a centralized location; generate insights and customized tables; and produce all manner of graphs, tables, and charts.

However, collaboration is where Abacum is looking to set itself apart, with built-in features to facilitate dialog between all the various parties involved in finance or operational data.

Indeed, Abacum supports comments around specific pieces of data, with tagging that notifies others if their input is required and automatic reminders rather than having to chase them up. It’s also possible to create dedicated “spaces” so that specific teams or departments can discuss and collaborate around data that is relevant to them only. 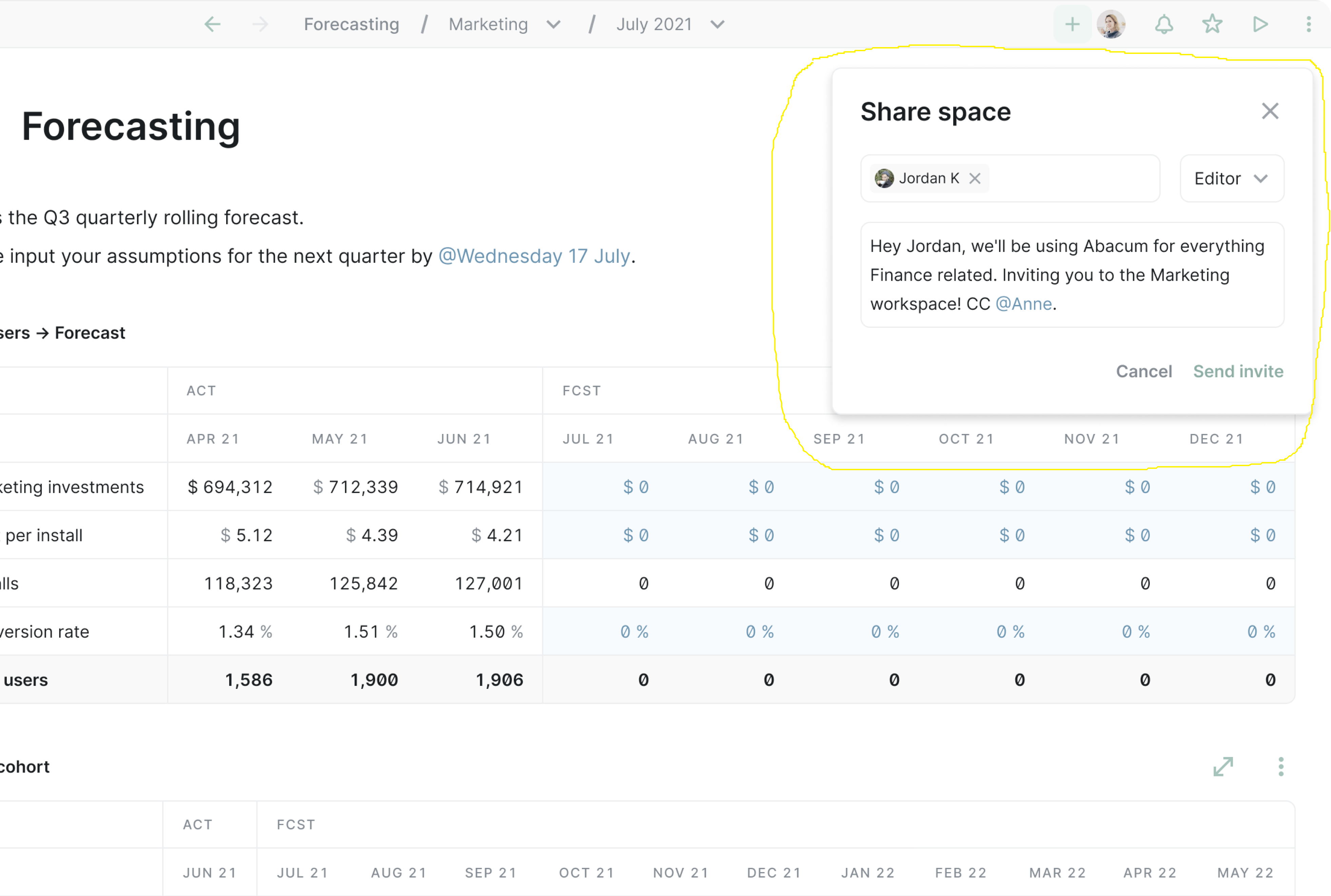 There has been a flurry of activity across the FP&A space this year, with young upstarts such as DataRails, Cube Software, and Pigment all raising sizable investments from the VC fray. Then there are the many legacy players to contend with too, such as Anaplan, Adaptive Insights (which Workday acquired for north of $1.5 billion in 2018), and Oracle-owned Hyperion.

From Abacum’s perspective, the legacy players, in particular, are ripe for disruption, having “lost their competitive advantage” due to their rigidity and “overstuffed functionalities,” according to Martínez. “For the speed and scale of today’s tech companies, these legacy players usually can’t adapt quickly enough to meet their needs,” he said.

That, in part at least, is why we’re starting to see a slew of newer companies enter the FP&A fraternity. However, a combination of external factors is also making companies realize the importance of making good use of their financial and operational data — at a time when there are so many uncertainties permeating industries.

“The pandemic really opened the eyes of many companies, that forecasting exists for a reason,” Martínez explained. “Proper financial modeling and scenario planning needs to be at the forefront of all forecasting and business strategies. This really resonates with our target audience where, in the tech space, there is a lot of uncertainty in the market, and they need to always be prepared for any and all situations.”

While many people may align “fintech” with modern banking and payments solutions such as N26 or Stripe, Martínez thinks that “operational fintech” has been a little slower to gain traction, which is why many financial professionals have so far persevered with traditional spreadsheet-led approaches.

“These [legacy approaches] are great, but none of them answer the needs and pains of scaling finance teams,” he said. “And so, this space is ripe for disruption, and many founders have seen that FP&A has so much potential to be a value driver.”

Prior to now, Abacum had raised $7 million, and besides lead backer Atomico, the company’s series A round included investments from Creandum, FJ Labs, S16VC, among others.

Since its seed funding back in April, Abacum — which has offices in Barcelona and New York — reports that it has grown its team from 15 to 70, and also counts hires from companies such as Microsoft, Amazon Web Services (AWS), and Mixpanel.