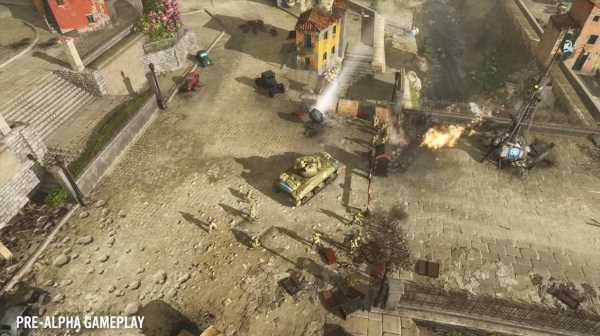 Sega and Relic Entertainment said they’re launching a demo for Company of Heroes 3 multiplayer on Steam starting on Tuesday.

The high-profile World War II real-time strategy game will debut in 2022, but developer Relic said that they have a pre-alpha slice of gameplay ready for multiplayer players ready to try. You can pre-load the demo now at CompanyOfHeroes.com, and it will go live at 9 a.m. Pacific time on November 30.

Part of a series that has been around since 2006, the Company of Heroes games test your ability to control both the tactical real-time 3D battles and the thoughtful turn-based strategic 2D campaigns. And this one is set in Italy, as U.S. and British forces try to dislodge the entrenched German Army from places such as the Monte Cassino monastery on top of a mountain.

The demo will allow players to jump online and get a first glimpse at the new multiplayer combat. They can experience four Italian maps in a variety of game modes, including co-op vs AI opponents, competitive player-versus-player (PvP), and skirmish vs AI, while trying out familiar and brand-new features like full tactical pause in skirmish mode, vehicle side armour, verticality, battle groups, and veterancy.

The 2nd Annual GamesBeat and Facebook Gaming Summit and GamesBeat: Into the Metaverse 2

Two classic factions are available: the U.S. forces and The Wehrmacht, each bringing their unique abilities to the battlefield. More factions will be revealed in the run up to launch, with Company of Heroes 3 promising more content than ever before. Producer Morain McGlaughlin of Relic said in the video that the Italian faction will be in the game but it isn’t ready for this demo yet.

The studio has gotten feedback on the single-player demo released earlier this year and is looking forward to hearing from its community yet again on the upcoming multiplayer pre-alpha.

Anyone that already has a COH-Development account, and has played the first pre-alpha, can simply head over to their Steam library, pre-load the multiplayer pre-alpha and play the slice from its launch. New players can sign up to COH-Development for free here and link their Steam account to get access to the game tomorrow.