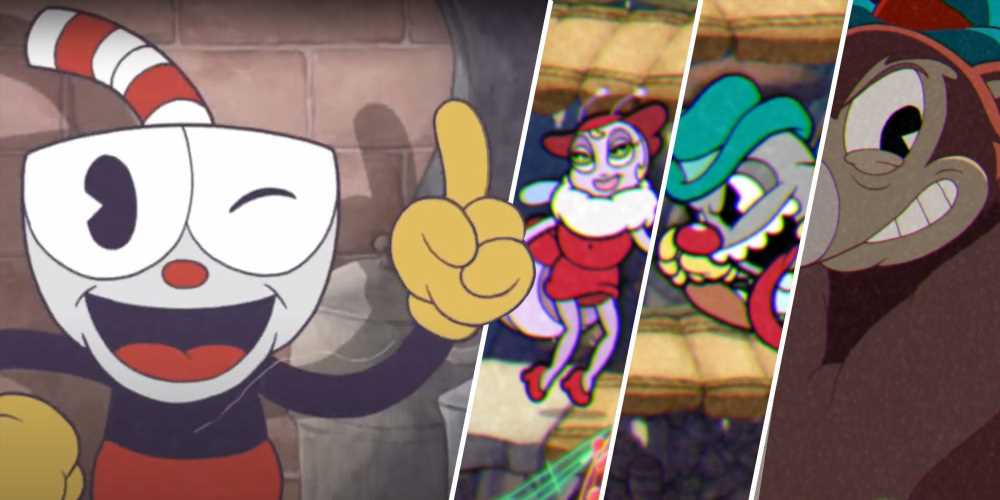 Cuphead: The Delicious Last Course is a tasty morsel that presents the opportunity for fans of the series to tackle a whole new slate of bosses. However, the Moonshine Mob isn't just one boss, they are three bosses accompanied by a whole, well, mob of goons. But worry not, while you may be fighting a tiny army, they are still just an army of bugs.

You will be dodging dangerous music, exploding bombs, and slipping past slippery tongues in this thrilling encounter. In typical Cuphead fashion, it can all be a little overwhelming at first. Thankfully, we have broken every element of this dangerous dual into its component pieces. Fear not, we have the answers you seek! 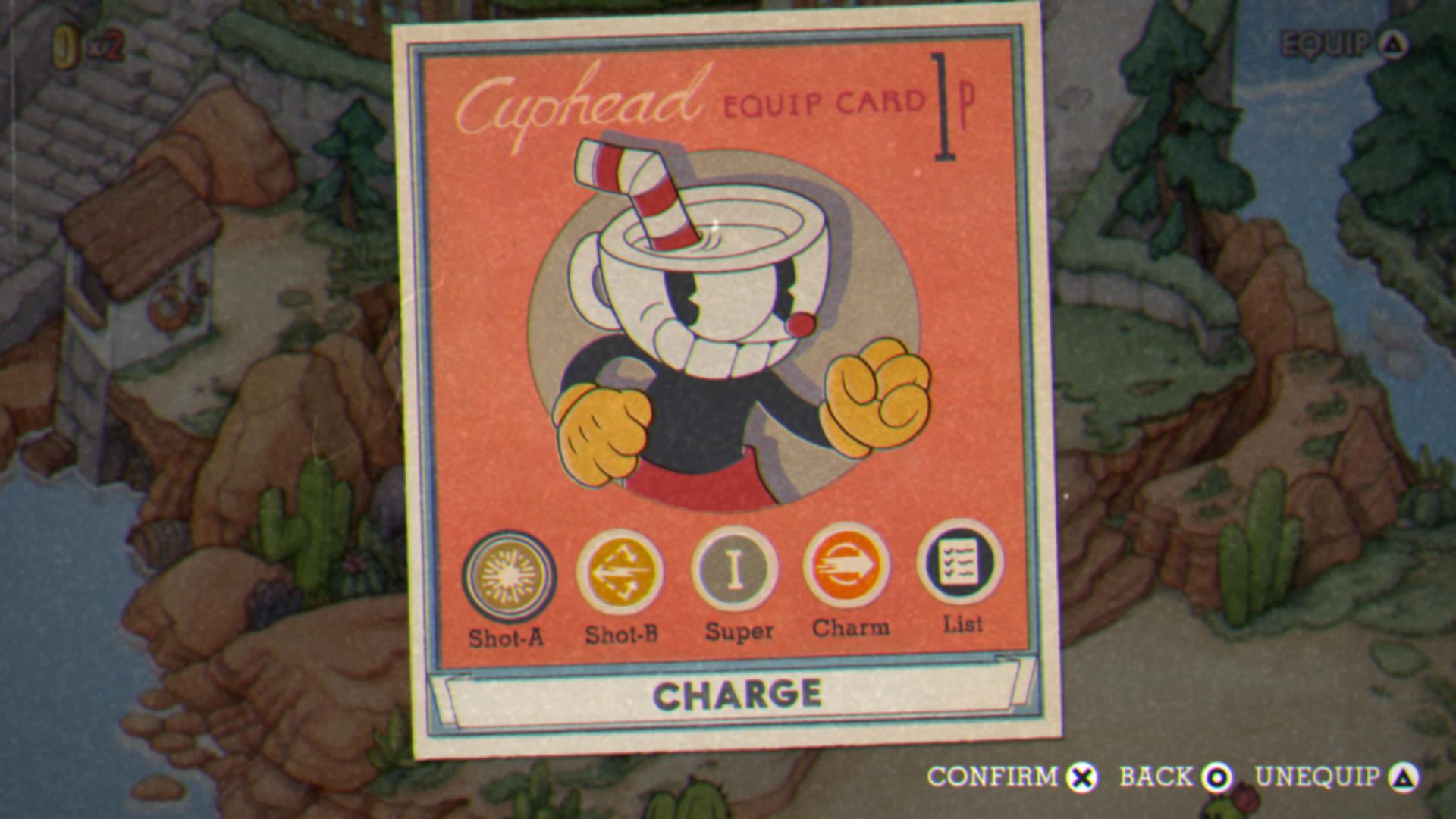 So, this battle is best fought using one gun that can pack a punch and one that can clear the screen of scrubs. What we found works the best is the Charge shot paired with the Converge shot. This way you can land heavily damaging attacks on the bosses, and easily clear durable projectiles, while also having a gun that can quickly take care of a number of lower vitality scrubs. 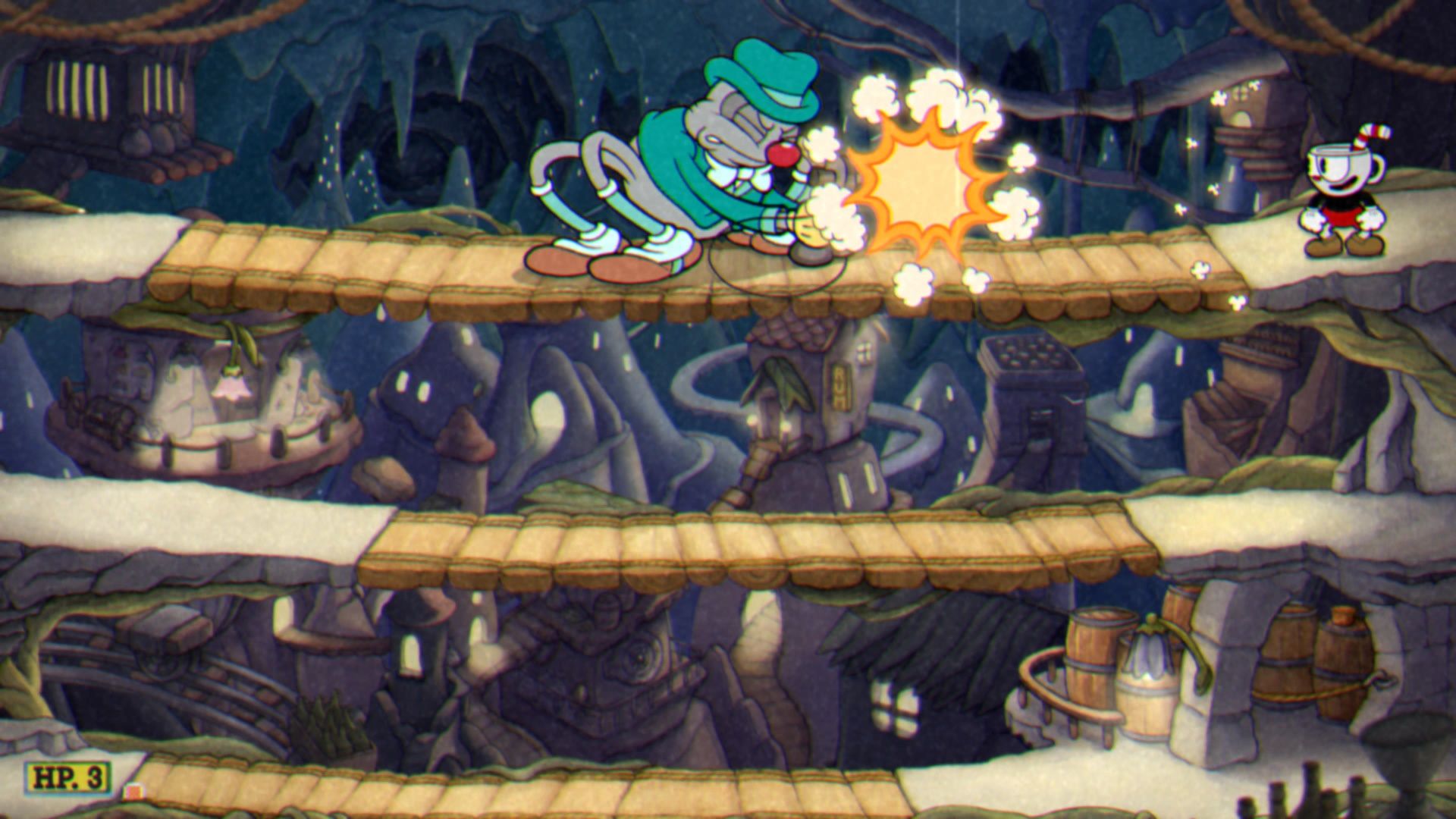 Honestly, any of the harder-hitting weapons will work as your primary, so if you are more comfortable with the Kablooey or Roundabout, use them as your primary damage dealer. We just like the oomph you get with the Charge shot. 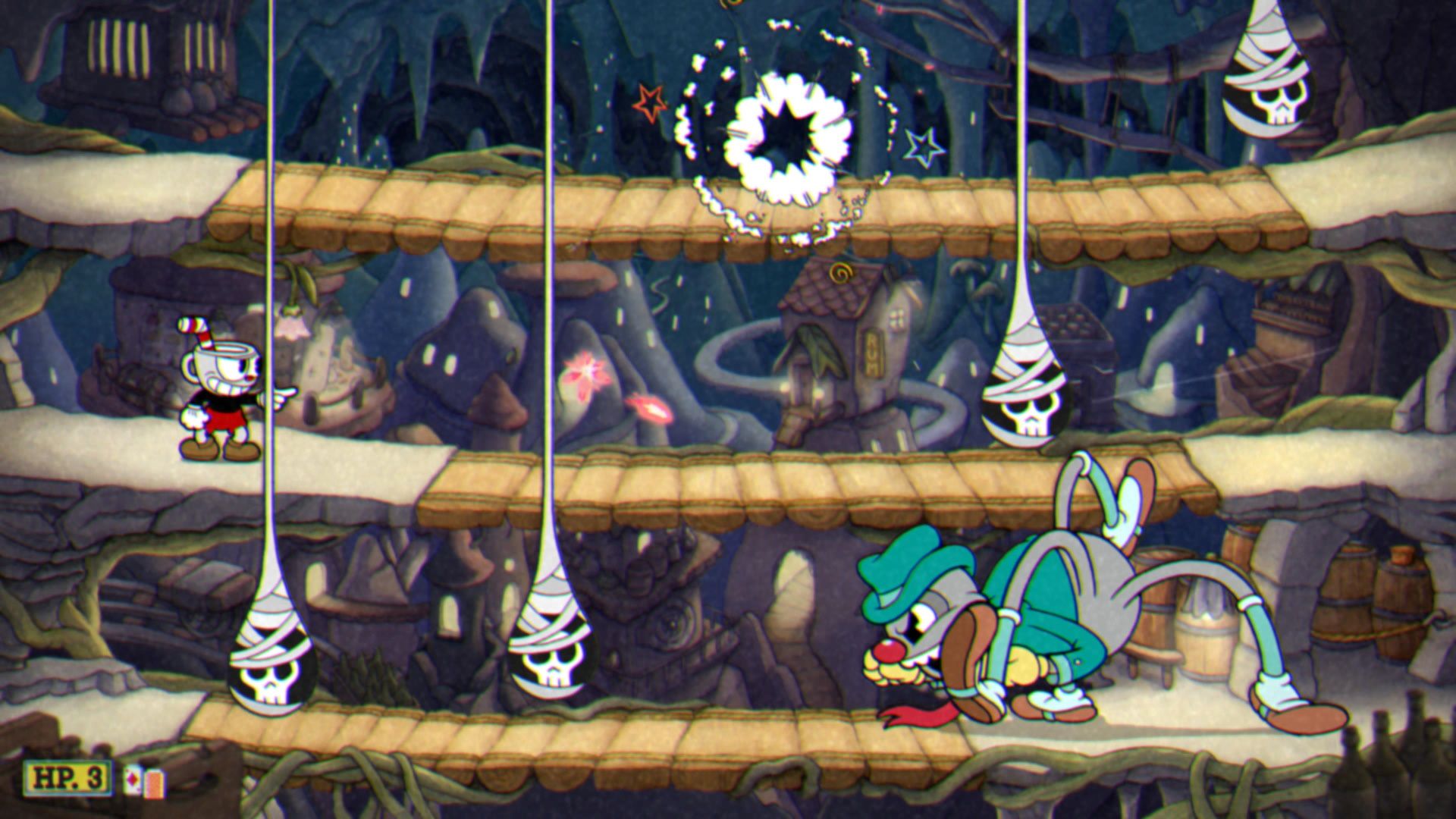 As for the secondary weapon, we also found that the Crackshot did pretty well as a secondary weapon, when clearing out enemies (though we still prefer the screen-clearing capabilities of the Converge weapon). The Seeker is pretty useful in the second phase, but it isn't as helpful when you are contending with the caterpillar in the first phase or the ball of insects in the third. 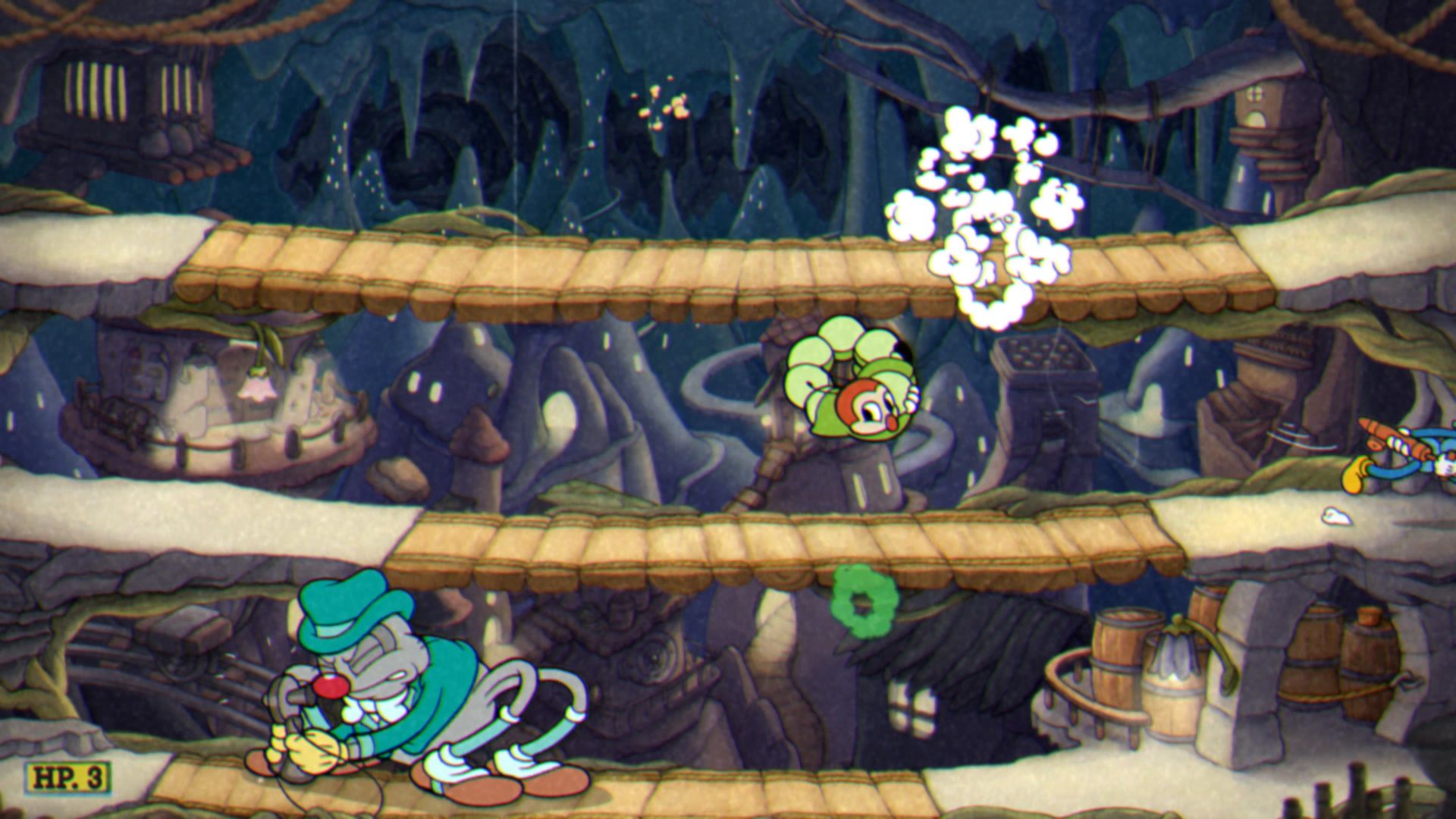 In regards to charms, we recommend going with the Smoke Bomb to help make the second phase easier (as well as generally being good at getting you out of a pinch), or the incredibly potent Heart Ring, as it will double your health if you hit all your parries.

Phase 1- How To Beat The Boss Spider 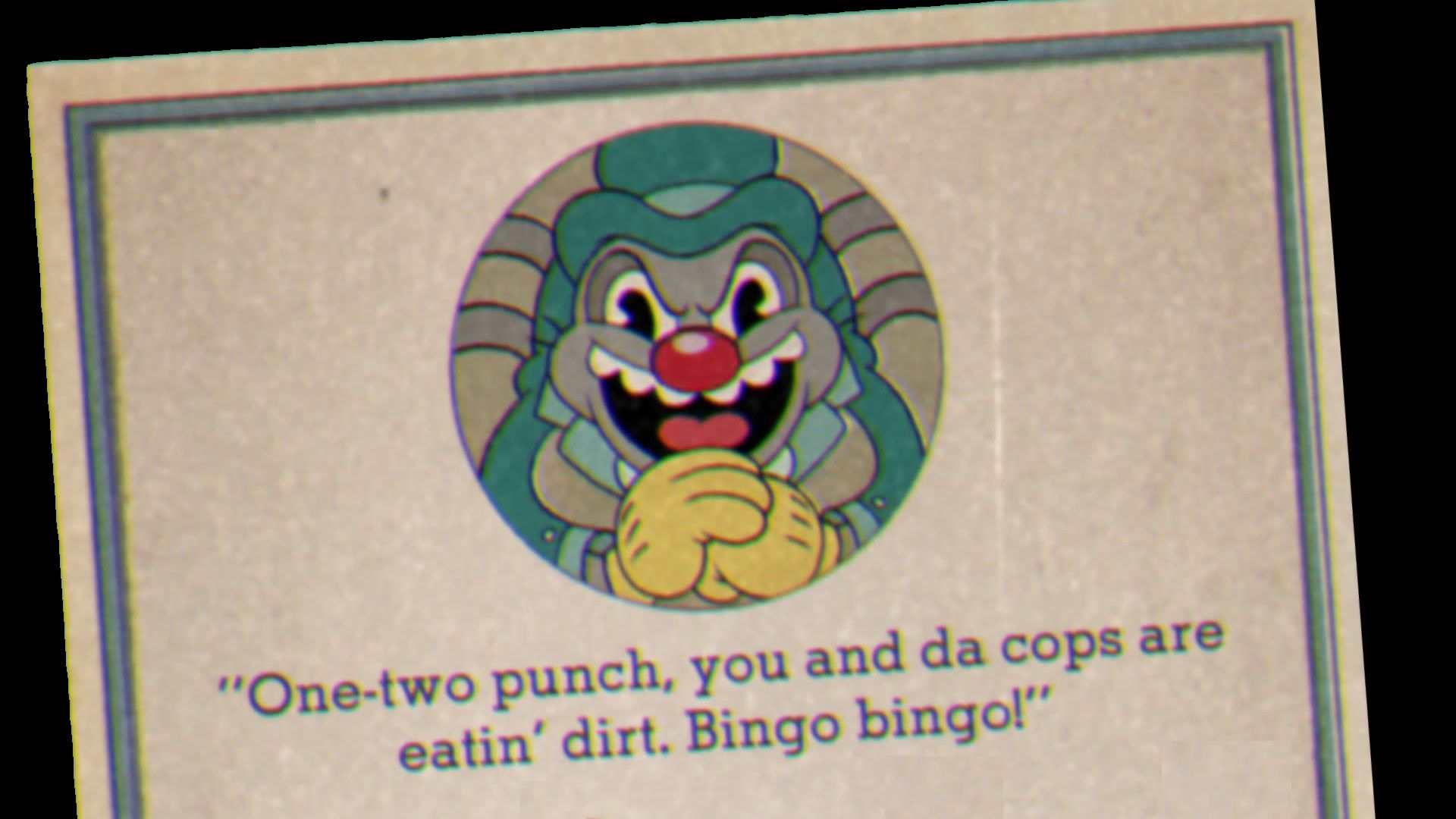 In the first phase, you will be facing off against a wheeling-and-dealing spider. He will move back and forth across the screen. While you can't predict if he will be on the top, middle, or bottom lane, he does always come from the side he just entered into. If he walks out with a phone, he will stop at some point to call in backup. If he doesn't have a phone, he will either walk straight through or stop briefly to press a button and drop the bomb bags. 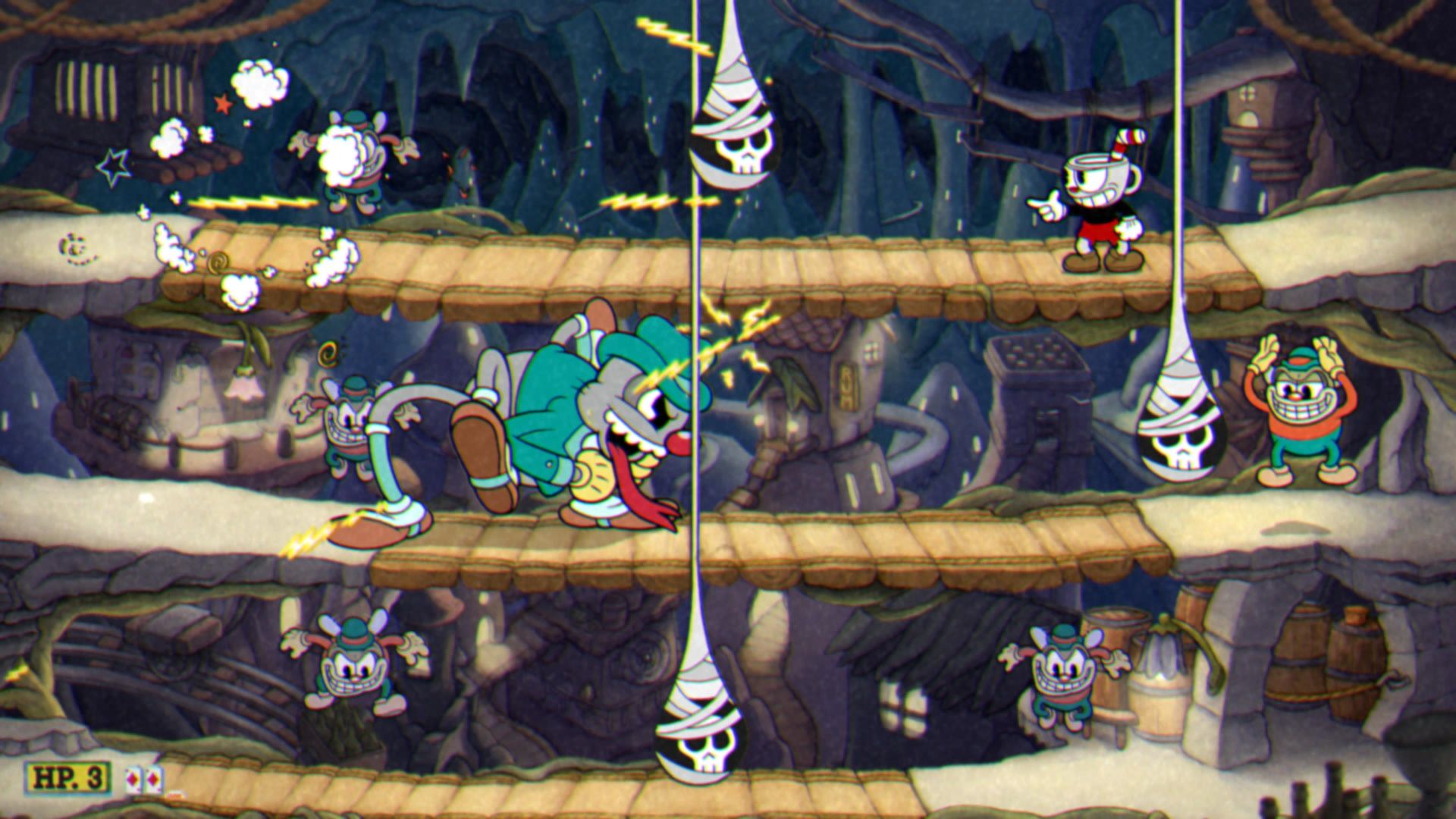 The primary thrust of this phase is to manage the screen. Whenever the Spider Boss calls in the bombs, you are going to want to clear them all as quickly as possible (just run past them). If you don't, they will begin to pile up on you. When the flies are called in, you will want to switch to a weapon that can deal with crowd control. While the Chaser will do an okay job of this, we really like Converge for clearing all the mobs. 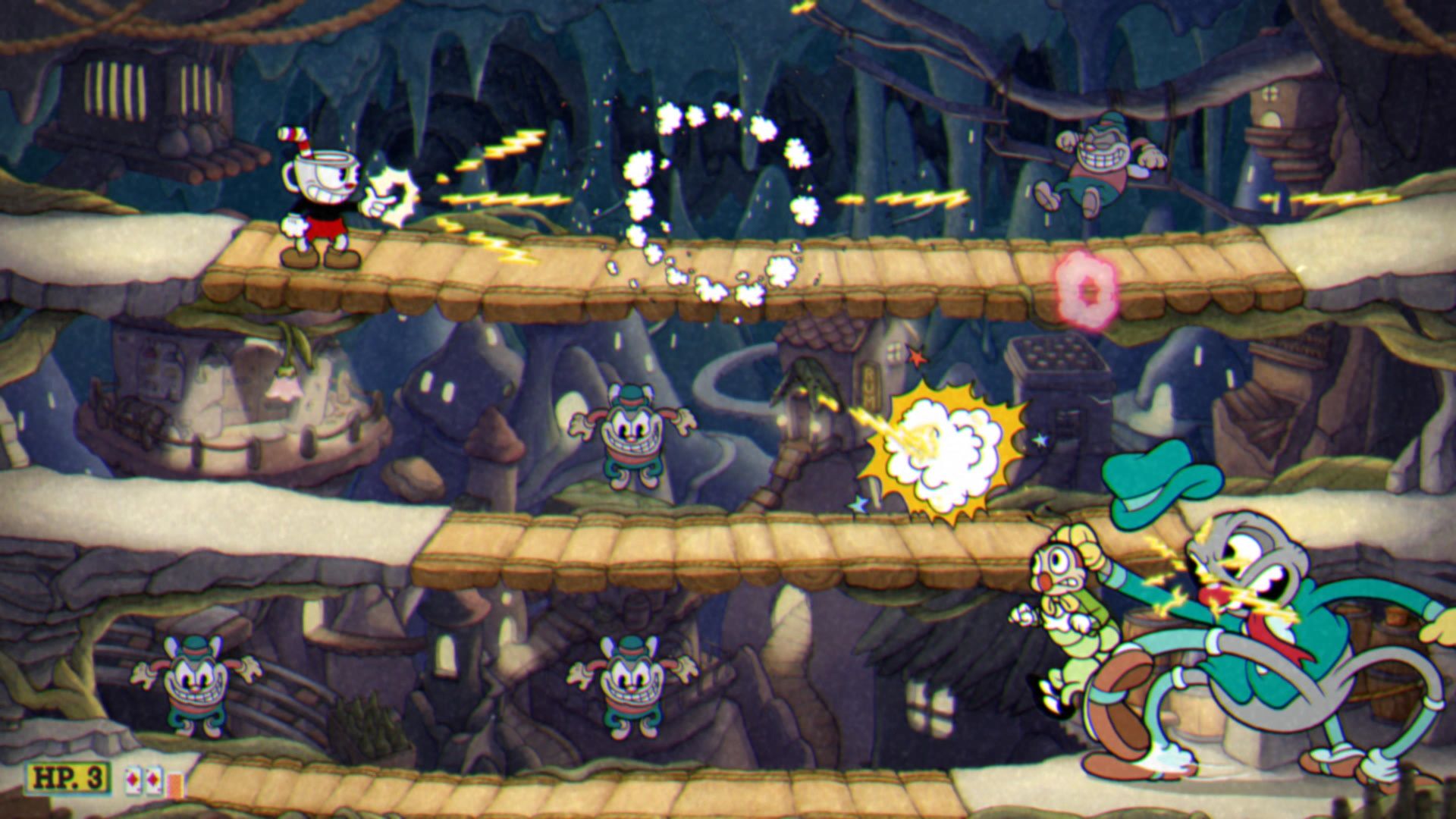 Occasionally, the Spider Boss will enter the screen and kick a caterpillar in your direction. This enemy takes a few hits and is best dealt with by a more powerful weapon (such as your Charge shot). However, Converge will also take care of it relatively quickly. 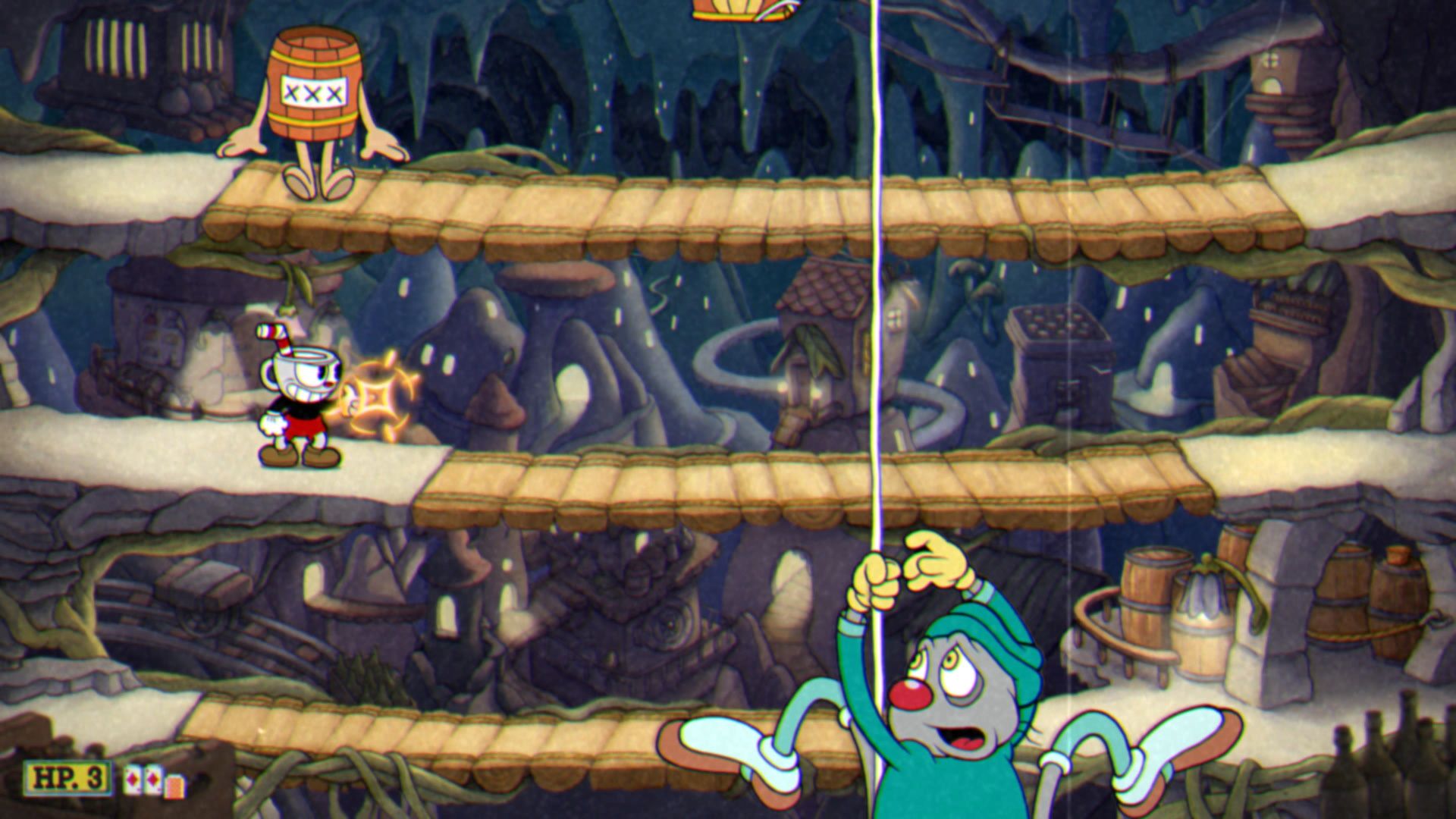 Keep the playfield clear, and keep pot-shotting the Spider Boss with something that packs a punch. Personally, we think the best bet for this is the Charge shot. Eventually, you will buckle this spider's legs.

Phase 2- How To Beat The Tap Dancing Lady Bug 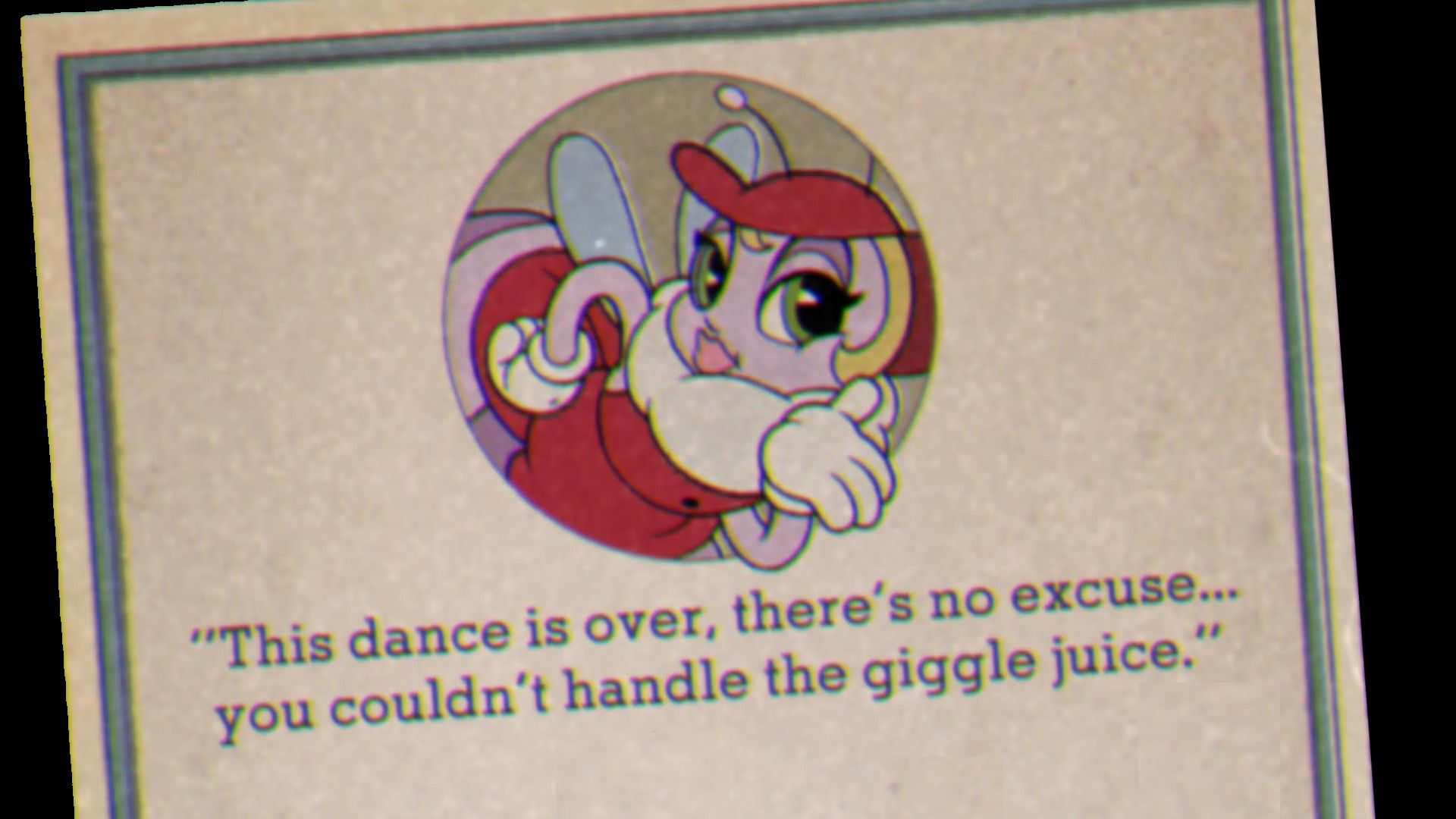 The second phase will see the Lady Bug lower from the ceiling—riding a gramophone. Once she settles in the middle of the screen, there will two pairs of three sound waves: one pair will turn clockwise, the other will turn counterclockwise. Once the soundwave starts to turn yellow, that means that it is about to violently reverberate. Start moving in the same direction as it in order to avoid being damaged. Or, if you have the smoke bomb equipped, you can dodge through it. 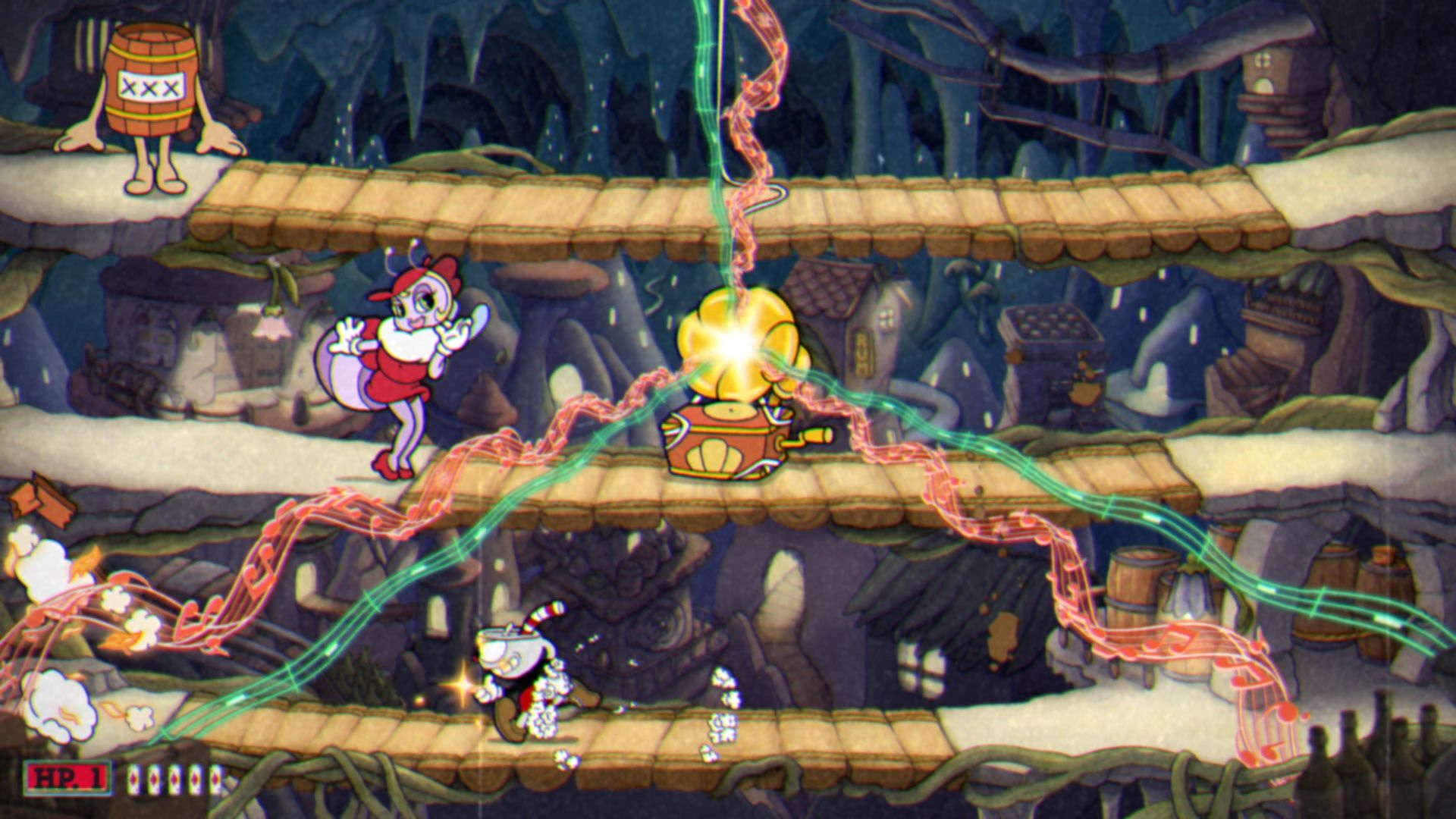 During these sections, there will be police flies and tap dancing booze barrels moving to the left and to the right on the top and bottom of the screen. Lady Bug will also be tap dancing from the left to right in the middle section of the center of the stage. They have little in the way of health, so they are primarily dangerous when you are jumping up or down, into that row. 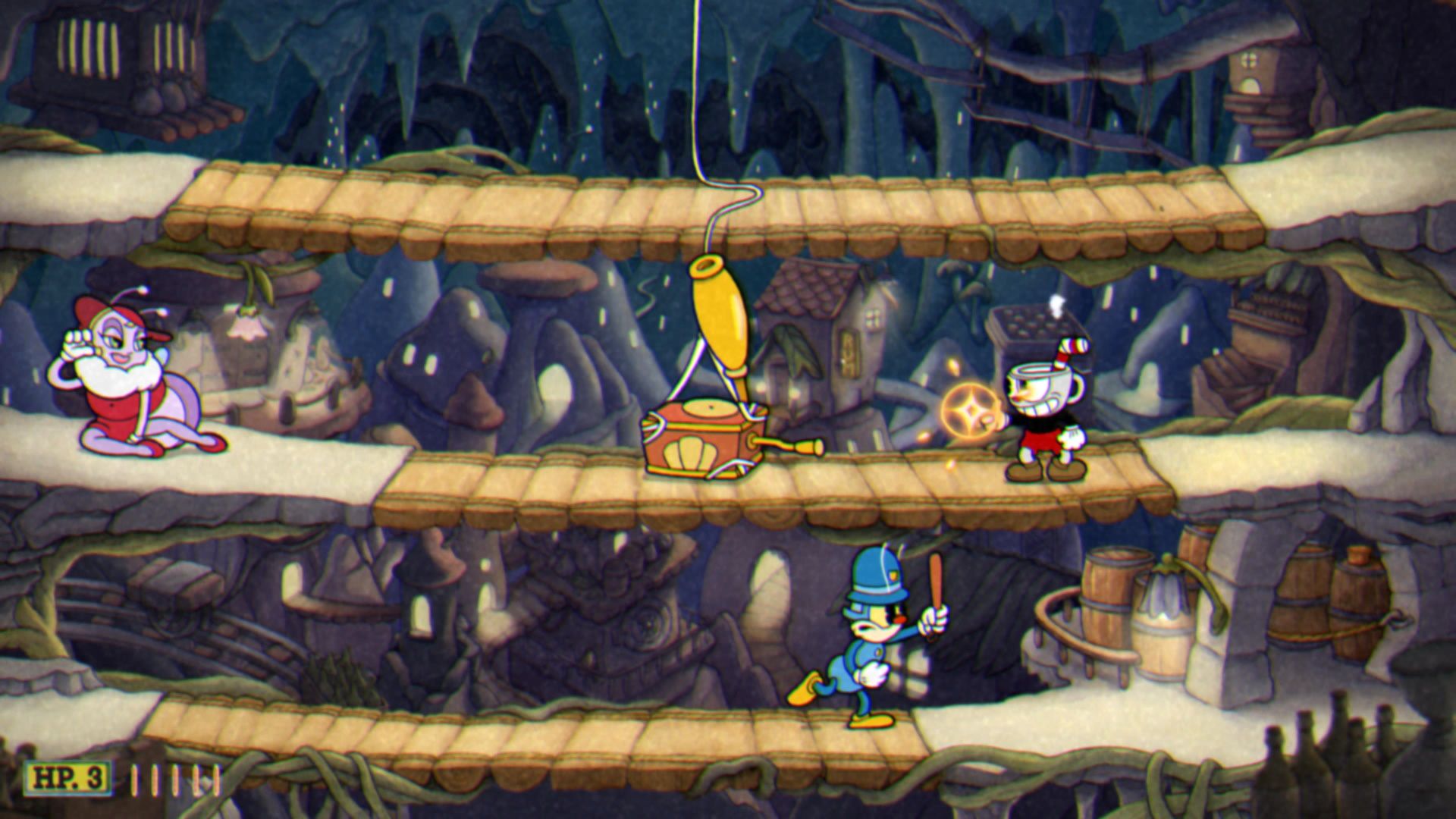 Whenever you are not dodging the gramophone's soundwaves, you should be shooting Lady Bug. Eventually, she will fall. However, before she does she will stumble all the way to the left or right (depending on what direction she was moving in when you landed the finishing blow). So make sure to watch out for that.

Phase 3- How To Defeat The Anteater 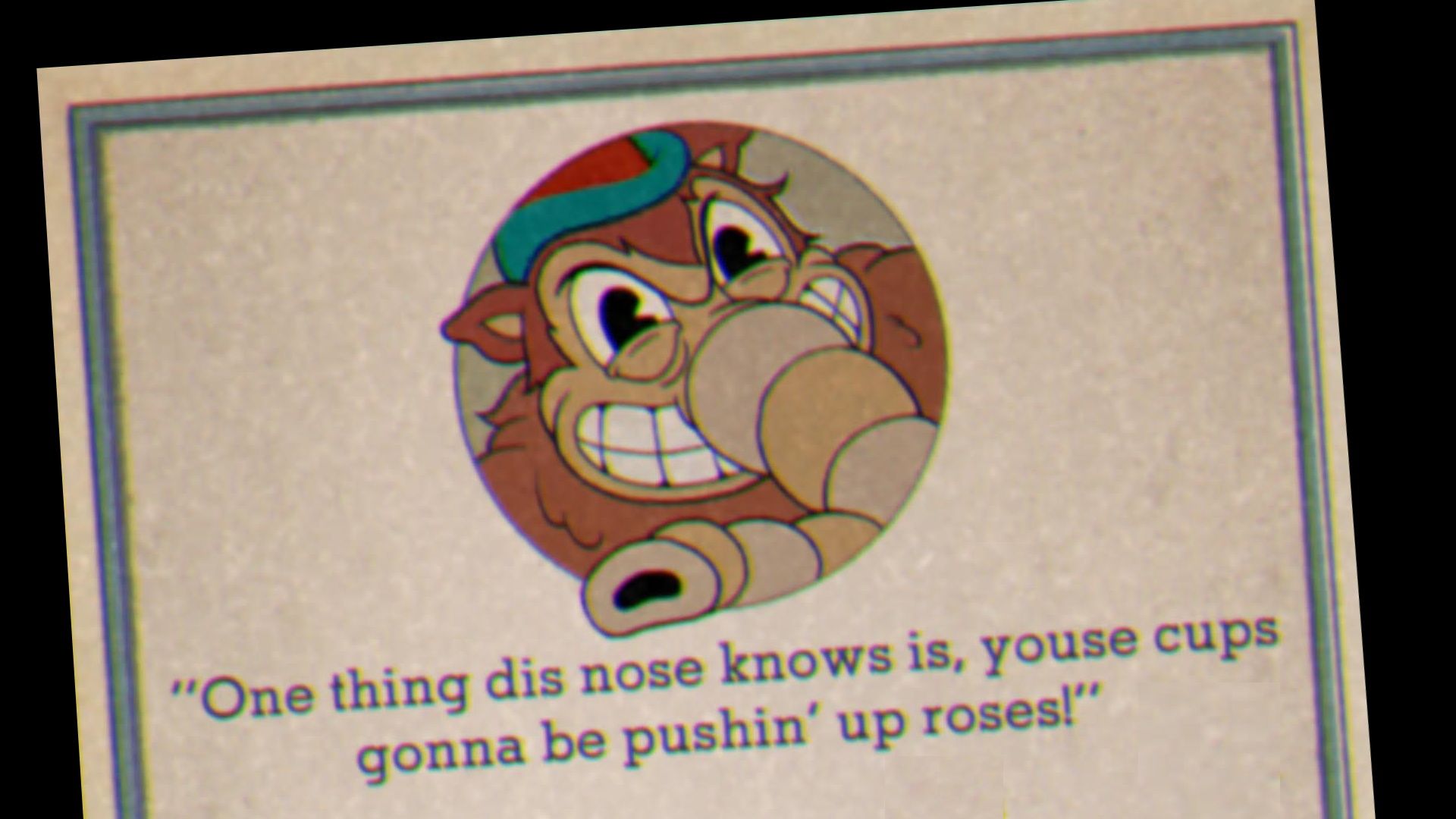 Now The Anteater will appear. When he first makes his presence known to you, he will briefly remove his hat, revealing the Snail Boss underneath. This is the perfect opportunity to get some shots in. Make sure you are standing on the right side, as The Anteater always starts by attacking from the left. During this phase, The Ant Eater will continuously poke its nose out from the side of the screen. 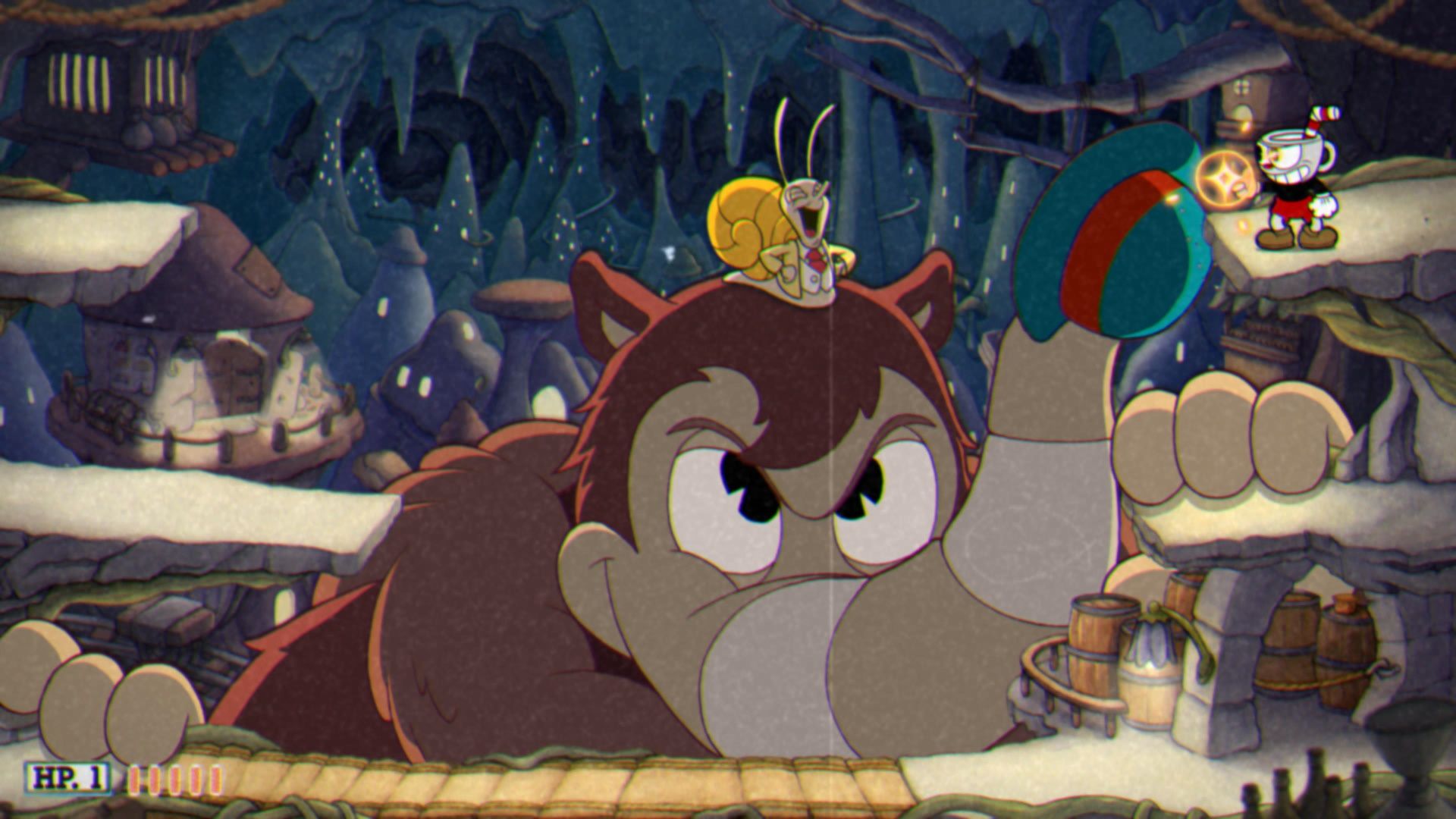 The nose comes and goes pretty quickly, so you aren't going to be able to react if you are on the other side of the screen (where you are mostly safe). So, instead of reacting, charge up a shot and fire straight ahead every time the ant eater's nose leaves the screen. It will inevitably run into your shot a number of times. Shoot, and then crouch; that way if it fires its tongue at you, you will duck under it. If it does fire its tongue at you, and you are ducking, make sure to drop to the level below before it brings back the ball of insects. 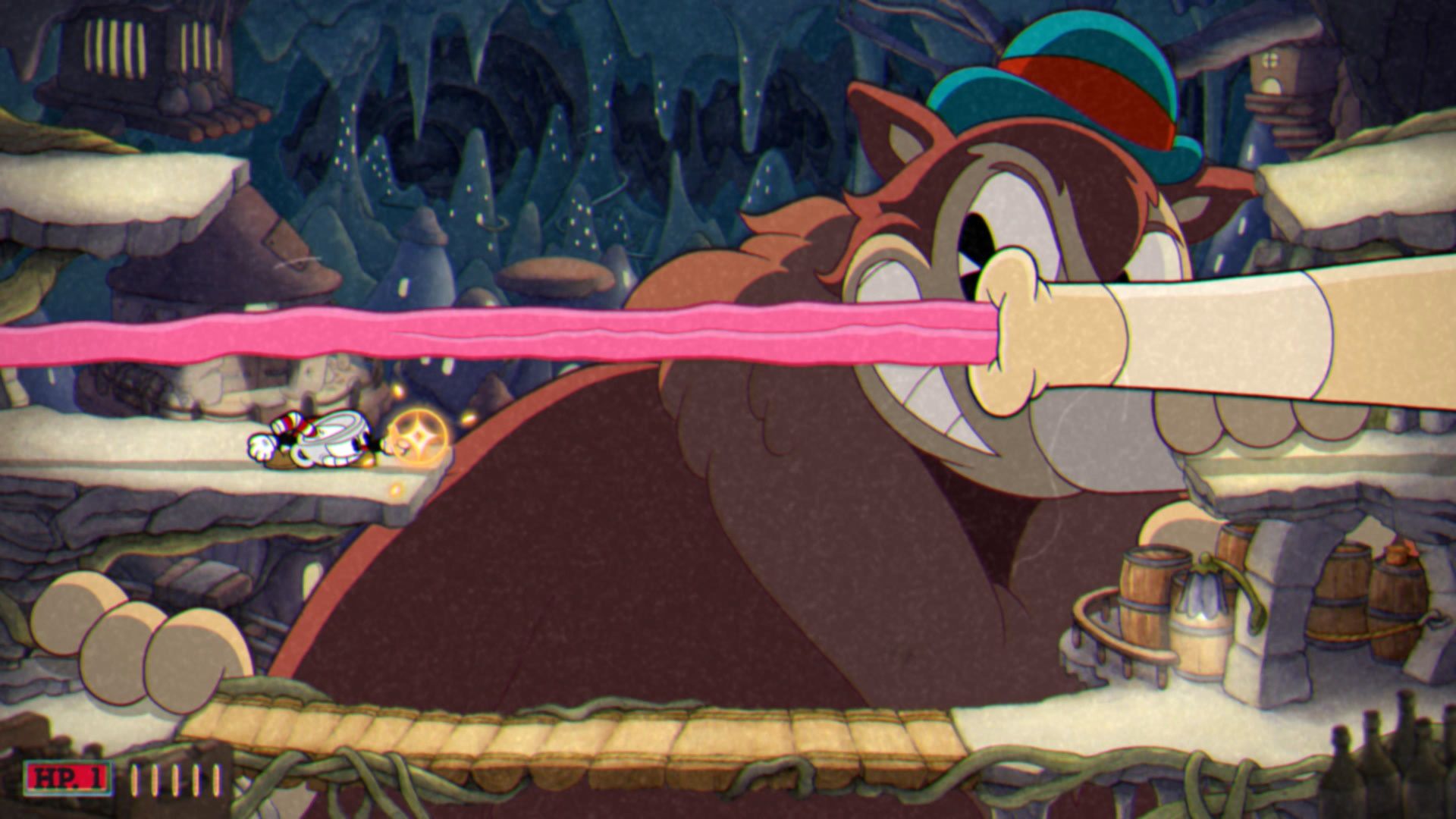 After it fires off the ball of insects, try to hit them with a charged shot to immediately clear the stage of that obstacle. Then run to the other side of the screen, as The Anteater is going to switch sides. Rinse and repeat until you take the Anteater out. Once it is down for the count, you just need to finish off the snail. It will send projectiles your way via its loudspeaker. However, a single charged shot will take it out. 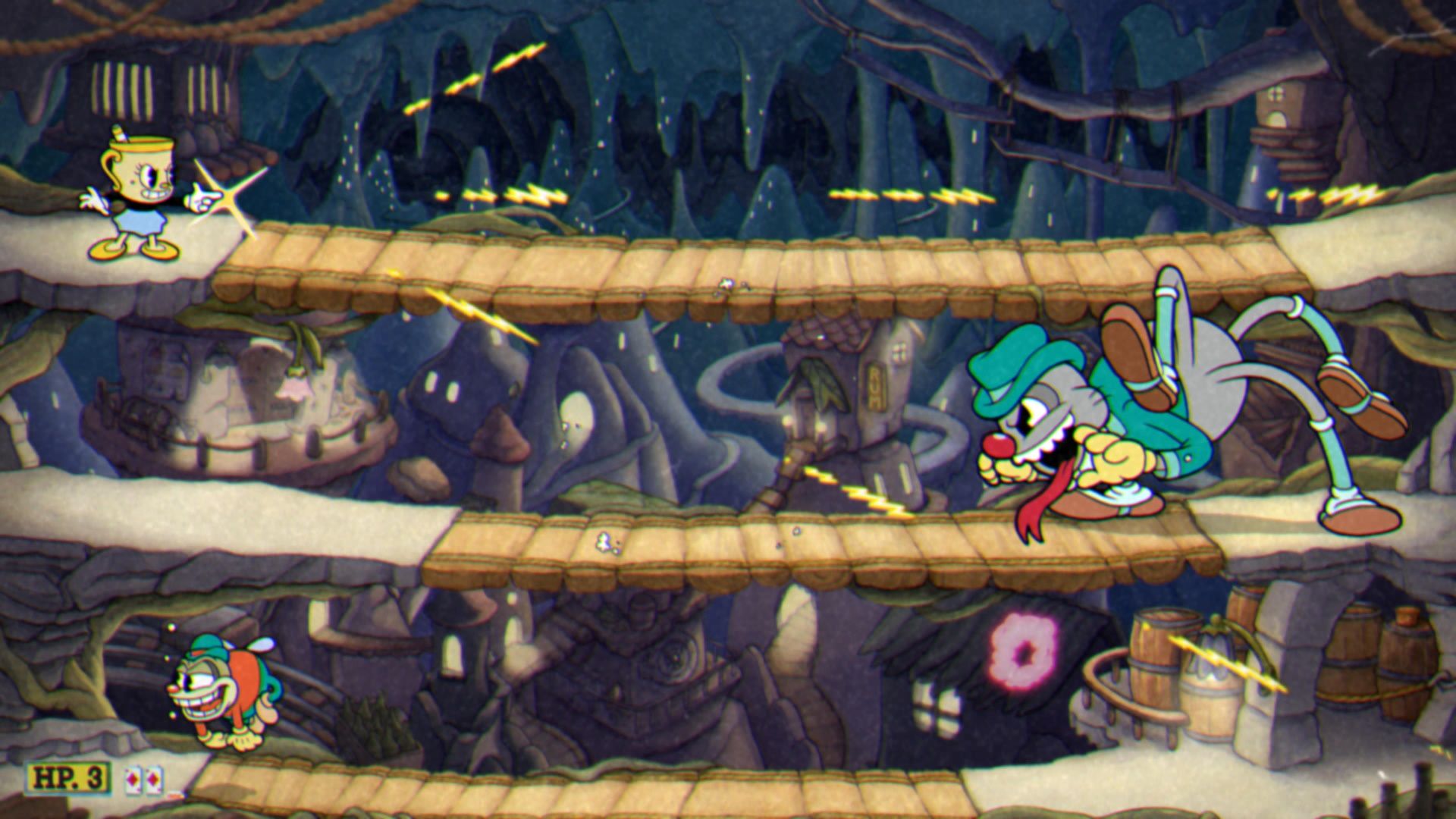 The only thing you will need to keep in mind when fighting the Moonshine Mob with Ms. Chalice is that you will need to use the double jump to hop between platforms in the different phases, as her single jump is shallower than the other characters'. However, this gives her an advantage in the first phase of the fight, as this means she can trigger bombs above her without ever having to be on the same level as them (thus she is never in danger of being hit). 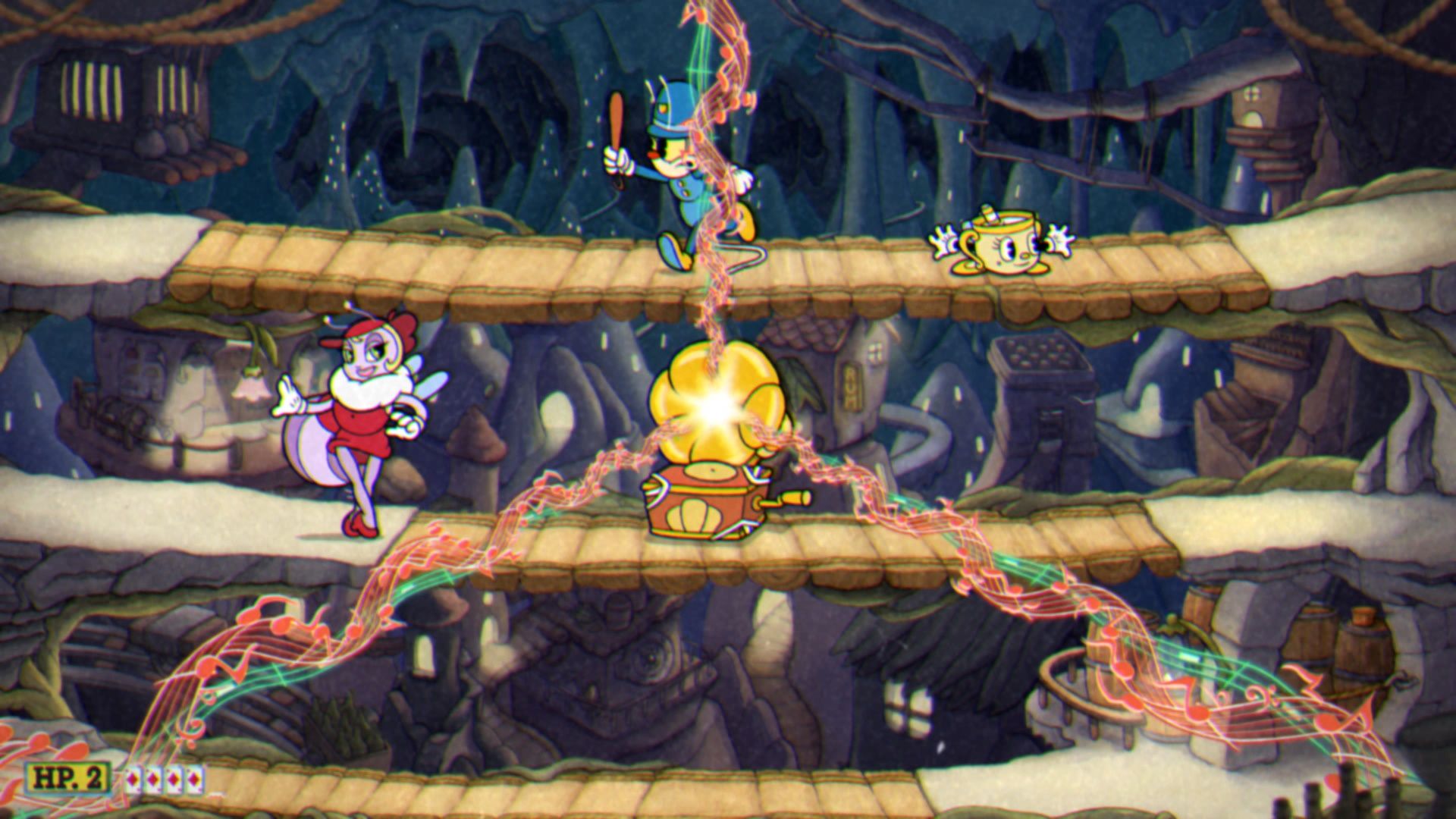 In the second phase, you can use her roll in the exact same way you would use the Smoke Bomb. Just remember that you need to press the dodge button while crouching to get the invincible roll. 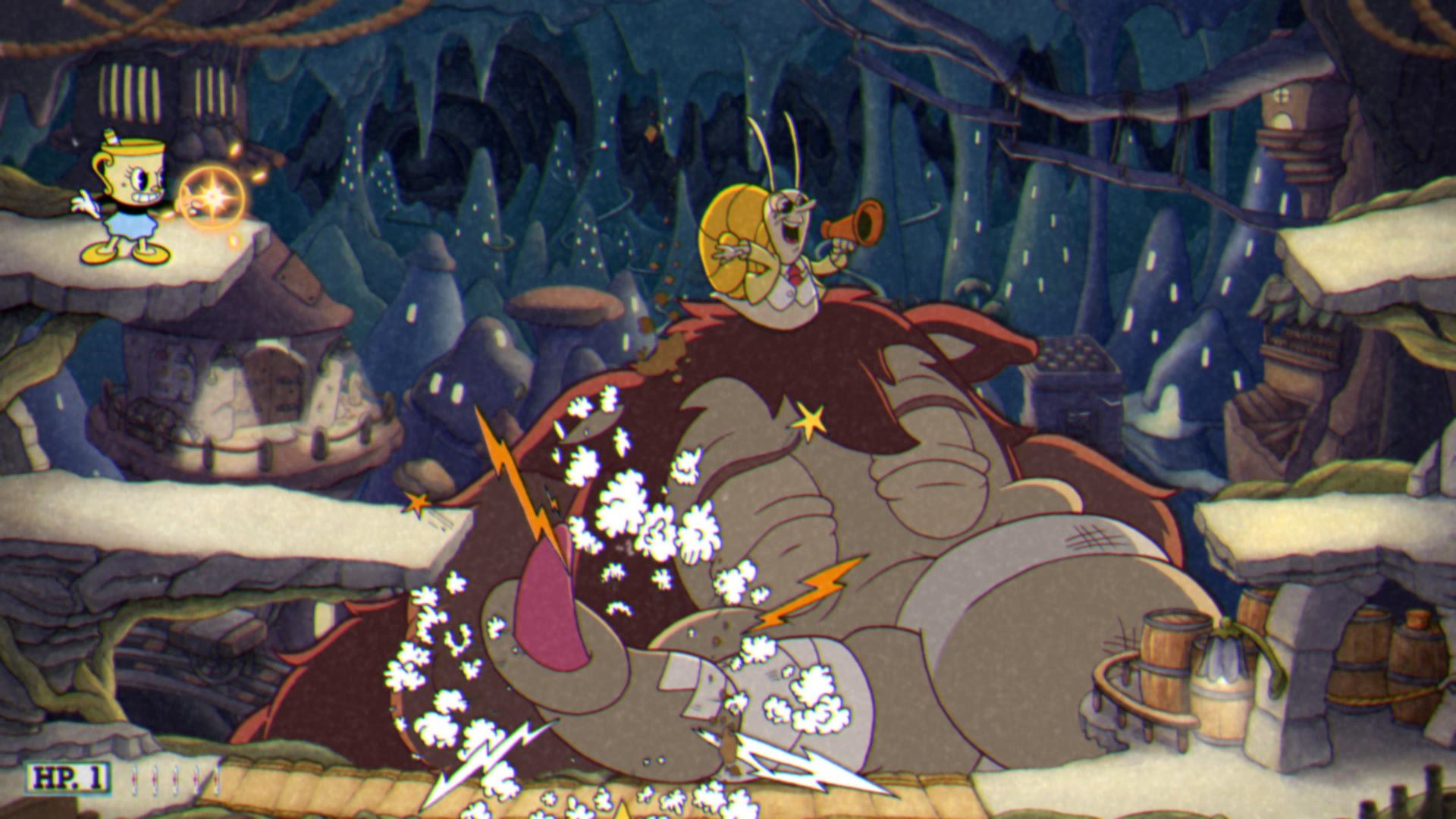 Beyond that, due to how her parry works, you won't be able to parry the Anteater's tongue in the last phase. However, her parry being a dash does make it easier for her to chase down the pink pesticide clouds and tap dancing moonshine barrels. All-in-all, once you are used to controlling her, Ms. Chalice has all the tools to make this battle slightly easier (especially since she comes with an additional heart).