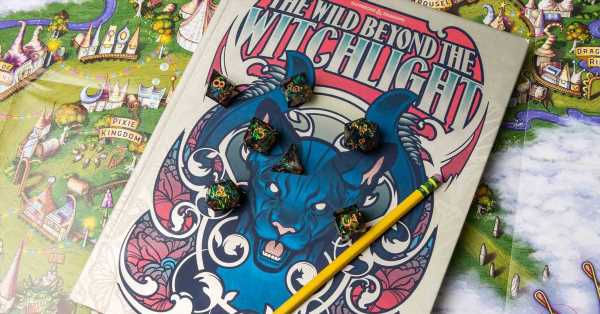 The Wild Beyond the Witchlight, the newest campaign for Dungeons & Dragons, was designed from the ground up with the option for a pacifist playthrough. That doesn’t mean that it’s designed for children, or that it’s necessarily easy in any way. Quite the opposite, in fact. Finishing the campaign without resorting to violence is possible, but it might actually be the toughest way to go about things.

I can already feel several angry Dungeon Masters (DMs) pounding on their keyboards at home. Yes, every role-playing campaign has a pacifist option if your game master allows for it. But I’ve played plenty of tabletop role-playing games — including D&D campaigns — that require you to kill the big baddy before the story will move forward. You can stay in Barovia forever, if that’s your thing. Try the Dream Pastries, they’re delicious. But without killing Strahd von Zarovich there’s simply no way that you’re leaving that valley ever again.

This time around, the designers at Wizards of the Coast set out to do things differently, and they call it out for new players in the campaign’s opening pages.

[Warning: What follows contains light spoilers for The Wild Beyond the Witchlight.]

“One of the many novelties of this adventure is that the characters can accomplish their goals without resorting to violence — but only if they’re clever,” write the authors. “They can fight their way through the adventure as well, but the odds won’t always be in their favor.”

So what does that look like in practice? First off, it requires a bit more awareness on the part of the DM, because the things that the party accomplishes early in the campaign can pay huge dividends later on — including things like skipping some puzzles and encounters entirely.

For that reason, this book includes a Story Tracker. It’s essentially a worksheet that will help DMs keep track of their party’s accomplishments throughout the game. It contains a half-page worksheet for the very necessary pre-game “session zero” that you’ll need to have before you kick things off. But the authors have also been careful to call out in the text of the adventure when DMs should make note of something that might otherwise seem trivial.

Perhaps the party learned a minor skill in solving a puzzle, something small that doesn’t really have a spot on the character sheet. Or maybe they received a token from a non-player character (NPC). The text explicitly calls out what the DM should make note of, without burdening them with information about why. Then, when the appropriate obstacle comes up later in the adventure — sometimes dozens or even hundreds of pages later — the text also calls out when that minor skill or token becomes useful. It sounds trivial, I know. For many experienced game masters this is just how things have always been done. But there’s a lot more of it here in this adventure, and for first-time or rusty DMs this kind of hand-holding is a blessing.

The Wild Beyond the Witchlight also features much more interaction with NPCs than past adventures. Oftentimes, finishing a quest without coming to blows requires creative role-playing, and giving life to those NPCs energetically and consistently can help guide the party in the right direction. So Wizards has included a special appendix that it calls Roleplaying Cards.

The eight double-sided pages contain crib sheets for 32 key NPCs that players will meet along the way. Each card notes the NPC name, where they appear in the book, and then gives a few hundred words about their motivations and how to perform them at the table. Just copy them, cut them out, and keep them behind your DM screen. That leaves the back of each card open for additional notes.

Again, experienced DMs will probably be tearing their hair out right now. Of course there are notes on how to role-play the NPCs! They’ve been in D&D books all along! Many third-party modules come with these kinds of cards already! But Wizards put in the time to add them here, alongside new and enhanced guidance for DMs of every stripe in the beginning of the book. They reorganized the standard 256-page format to make room for it. This is the first time we’re seeing these kinds of aids in 5th edition, and I hope Wizards adds more of them in the future.

Finally, for parties that fail their rolls — or for parties that simply fail to grok the pacifist solution to a given puzzle — Wizards occasionally notes an explicit way to lend a helping hand. I won’t spoil it here, but suffice it to say that in the game’s opening chapters there’s plenty of opportunity for the party to just mill around with the colorful Fey creatures in this book. It’s so joyful and raucous that they might just skip over their goals altogether to have some fun. That’s not a bug, it’s a feature.

If the party strays, or if they fail their rolls, there are often notes for how to get them back on a pacifist track. Sometimes it’s just a random character that pops in, opens a door, and pushes them in the right direction. Players can usually just brute force their way through as well. Kick enough asses at the Witchlight Carnival and you’ll find what you need to move the story along.

And that’s OK. In the world of video gaming, pacifist runs can take multiple years and hundreds of hours to accomplish. When we’re getting friends around the table in the real world, no one has the time or patience for that. The Wild Beyond the Witchlight clearly wants its DMs to succeed, and that means giving them the tools and the permission to help their players achieve their goals.

The Wild Beyond The Witchlight will be available at your friendly local game store and online starting Sept. 21.

The Wild Beyond the Witchlight