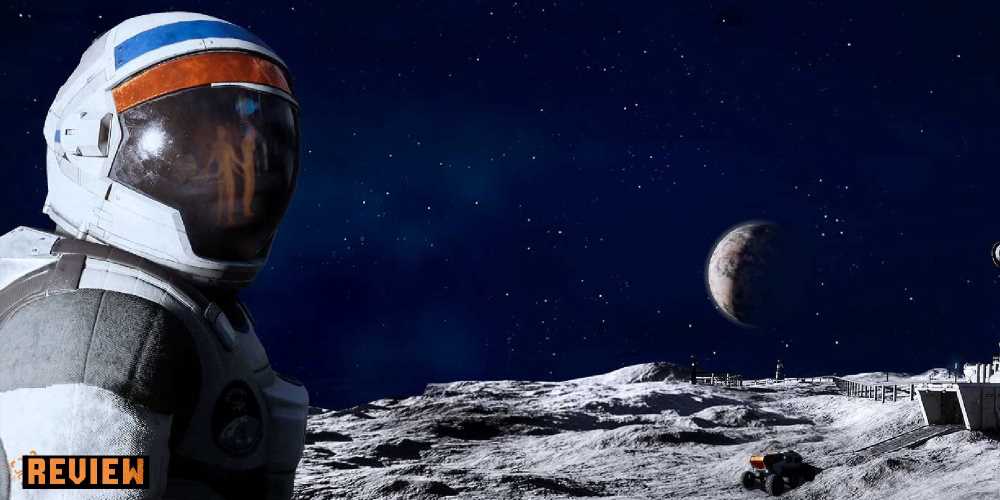 Racing against a dust storm to launch a rocket while a timer loudly ticks down has a distinctly Interstellar vibe to it. I’m a lone astronaut, tasked with venturing to the Moon to discover why a crucial power transmitter and an entire colony have gone dark. The fate of the world rests in my hands and my hands alone. Like I said, Interstellar vibes. Deliver Us The Moon’s current-gen upgrade is here, ahead of the sequel’s September 27 launch date. Does it hit its mark, fall among the stars, or break up in orbit?

The main appeal of any puzzle game is, drum roll please, its puzzles. For the first half of the game, Deliver Us The Moon contains a variety of engaging obstacles that introduce new mechanics in ways that don’t feel like tutorialising – a hard feat for any game to pull off. From simple tasks like finding the code to a locked door, to more complex ones like reading the blueprints for rocket controls to safely launch into space, they perfectly tread the difficult line between satisfying and frustrating. Just before I’d let out a sigh because I couldn’t figure out how to proceed, something would click, making completion of the brain teasers all the more rewarding.

Puzzles are greatly helped by Deliver Us The Moon’s stylised graphics and frequent perspective switches. Buttons are large and brightly coloured against metallic interiors, and swapping between first and third person helped to mix things up and keep me engaged. 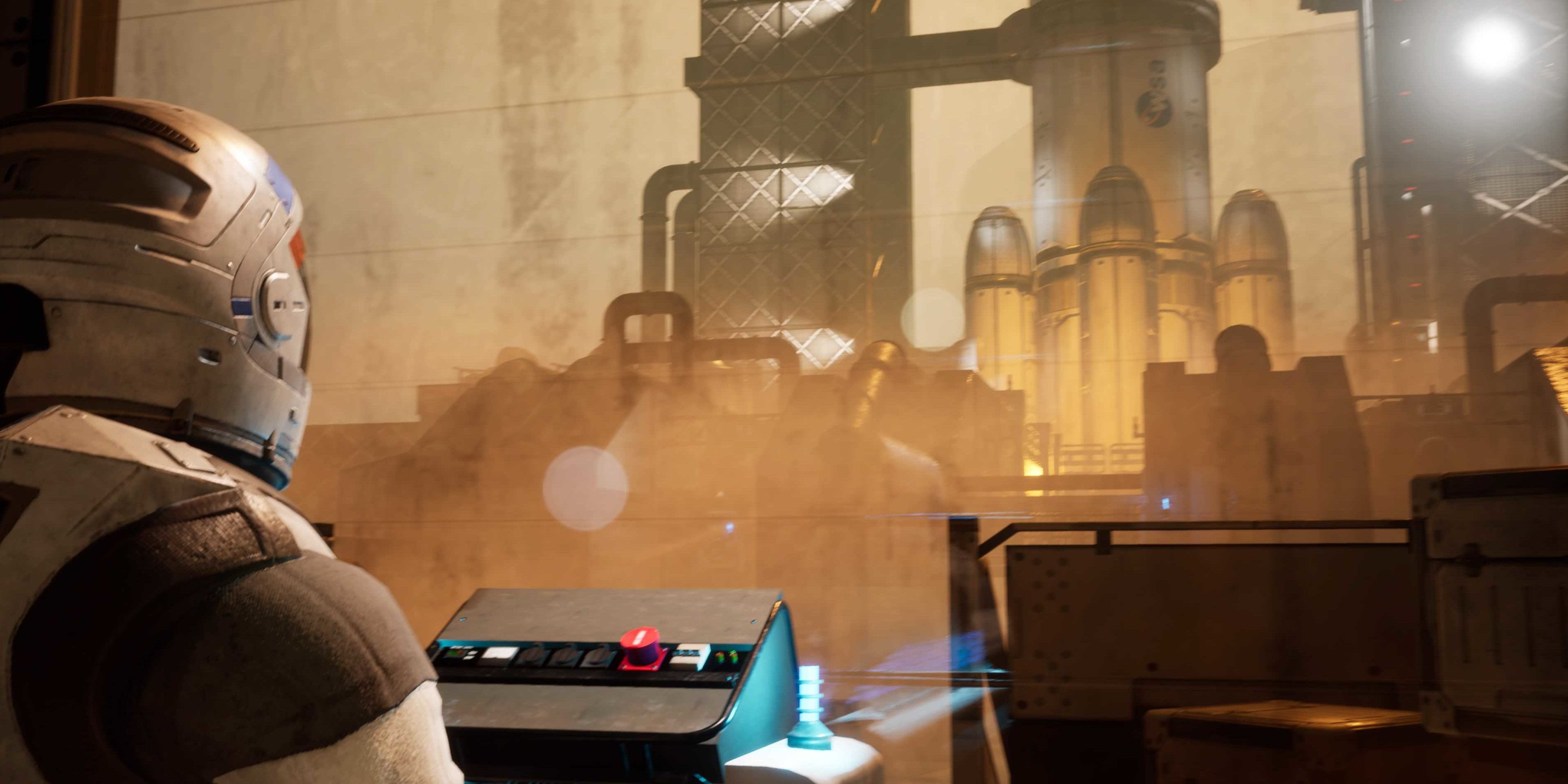 All the puzzles on Earth and in space introduce something new, be that a mechanic, tool, or simply the puzzle itself. Unfortunately, after a mission or two on the lunar surface, things start to feel repetitive. I had to align several towers over the course of two separate missions, and while there’s a quality of life feature that skips the climb down, it doesn’t stop the task from feeling more like a chore. It makes sense narratively, but it quickly stops being fun.

The story itself tells a solid sci-fi tale, a cautionary parable about the unsustainability of our mass consumption right now. That’s right, it’s political. Earth has been ravaged by humanity’s greed, but a temporary solution to our energy crisis exists on the Moon in the form of a rare helium isotope. A reactor and colony to work it are quickly assembled there, and everything seems hunky dory until one day, power stops being sent to the planet and the colonists go quiet. 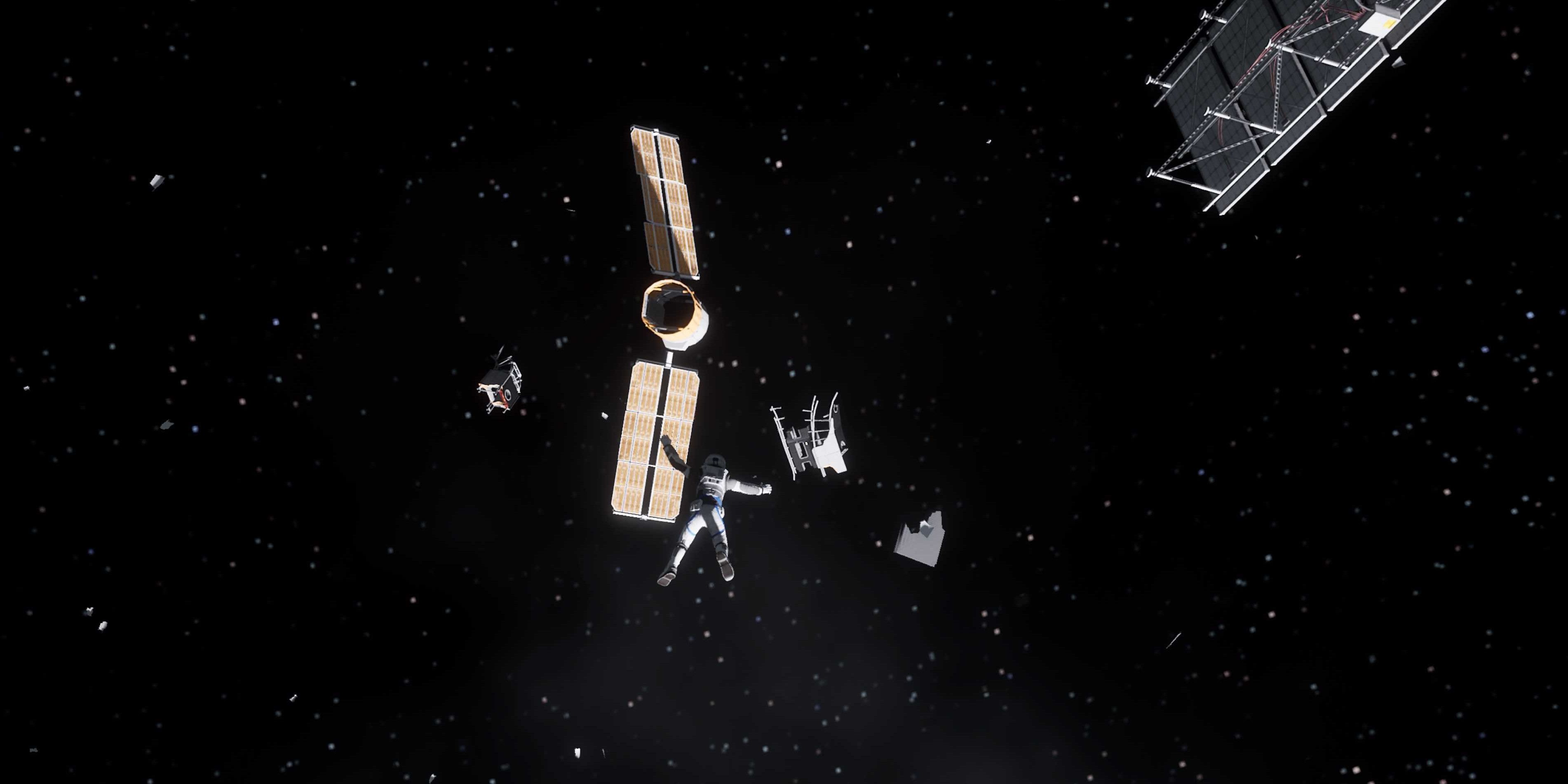 Most of the plot is unraveled through reading emails and notes, and listening to audio recordings. It’s a bit of a cliche method of storytelling at this point, but it gets the job done and works to reveal the more sinister events afoot. Where Delivery Us The Moon offers something new is in its use of recorded holograms that fill in for cutscenes. They’re a neat in-game replacement for flashbacks, and they add to the game’s sci-fi aesthetic brilliantly.

The central story about saving humanity from a crisis of its own making is well punctuated with more personal plot beats. Your mission commander is Claire Johansson, the protagonist for the sequel, Deliver Us Mars, and a woman whose father and sister are among the colony members I’m trying to get in contact with. Good sci-fi grounds itself in human issues, and Deliver Us The Moon knows this. 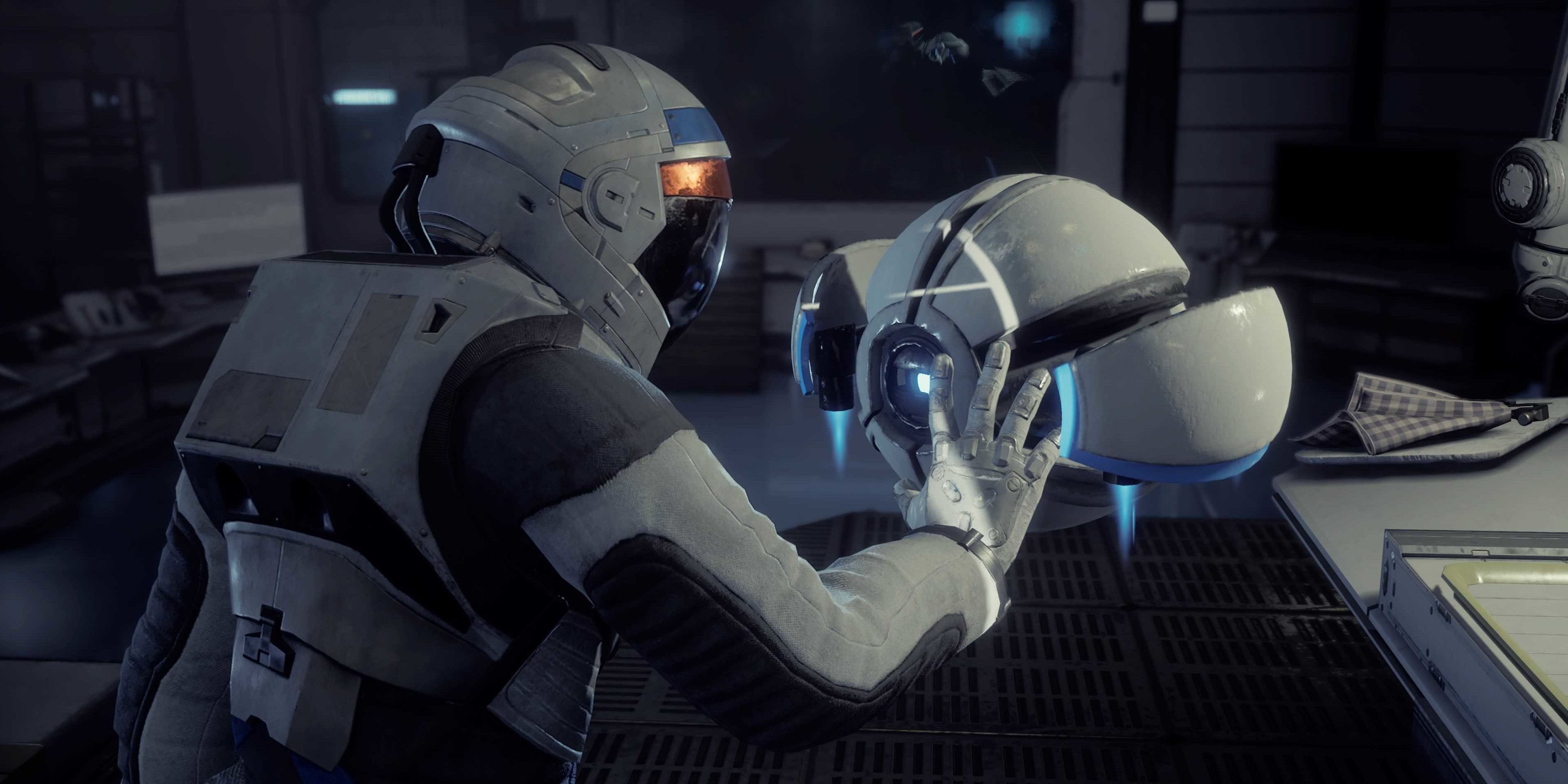 Levels are interspersed with small details about people living on the space station or working in the colony, too. A small guitar, a telescope pointed at a dust-covered Earth, and a tea party made of teddies and helmets all paint a picture of the lives and concerns of the missing inhabitants.

The updated visuals and optimisation for current-gen consoles mean my cute robot companion does wonders to provide the facial expressions my helmeted protagonist can’t, and my avatar’s body language is used to great effect. Everything looks crisp, but this upgrade doesn’t go far enough. Some animations remain clunky, and platforming feels cumbersome at times.

The upgrade also wastes an opportunity to add some more emotion and narrative weight to the last mission. There’s a point fairly late in the story where it would make perfect sense for the player character to start talking, and as Disco Elysium – The Final Cut shows us, these upgrades can be used to improve more than just visuals and performance. This current-gen upgrade misses the mark, however, by not adding voice lines or fixing some janky animations and controls. 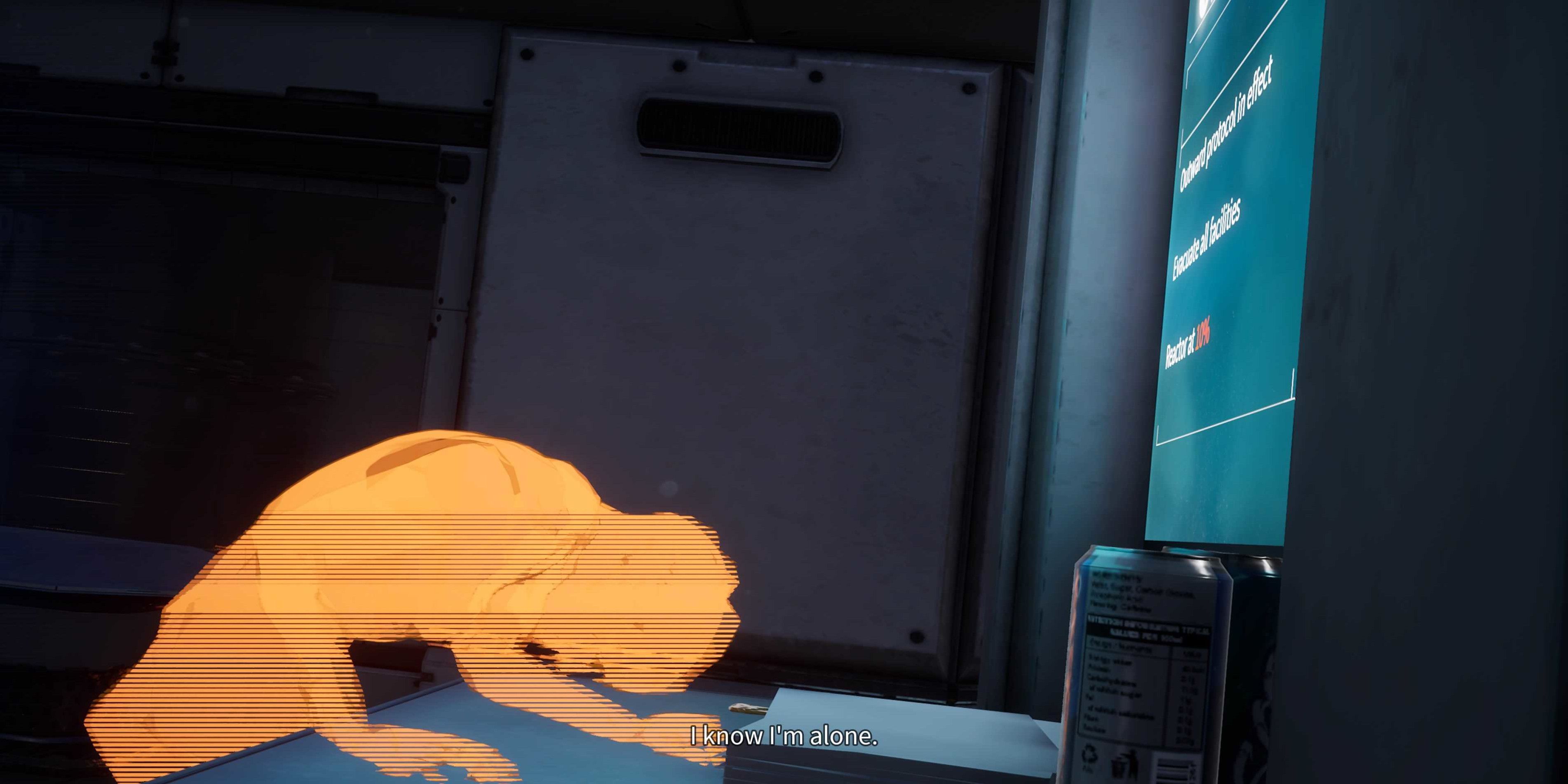 Fortunately, a mysterious, often intense score is woven throughout the game and helps to elevate its story, heightening emotional stakes and tension. There are a couple of action scenes that left my heart racing and had me on the edge of my seat. One saw me getting sucked out into space and having to navigate a debris field searching for oxygen canisters so I didn’t suffocate. The beeping of my O2 tank and lack of clear direction through the detritus make it a thrilling sequence.

Deliver Us The Moon is a wonderful puzzle game on Earth and in space, but the Moon itself fails to live up to its wondrous promise. While interesting puzzles are still sprinkled throughout, a sense of repetition creeps in and gets in the way of an otherwise enjoyable story. It’s not that it fails to hit its target, it just turns out the target isn’t all it’s cracked up to be.

A review code was provided by the publisher for the purposes of this review.