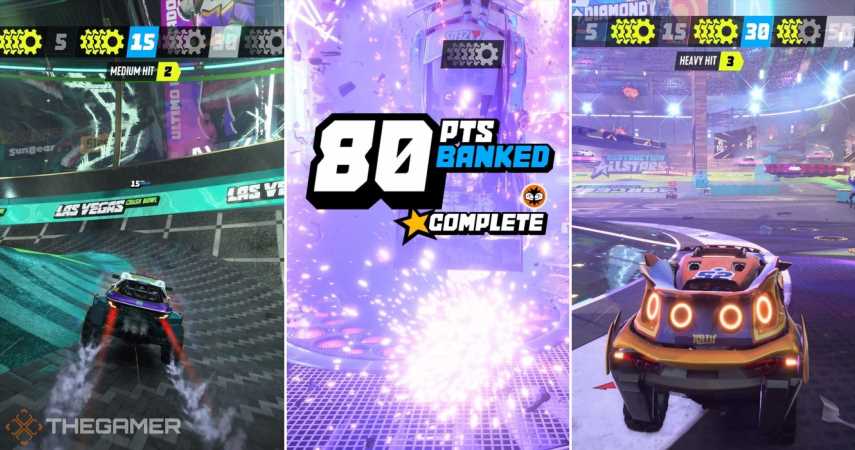 February’s PlayStation Plus lineup is now available for Sony’s subscribers. PlayStation 5 players get Destruction AllStars for free this month. With exciting car combat and bombastic characters, it’s one of the most eye-catching games on the console yet.

RELATED: Concrete Genie: How To Unlock Every Story Trophy

It’s been years since the destruction derby genre was prevalent in gaming. Those new to the genre may need some tips and pointers to thrive in these tense multiplayer skirmishes. One of the game’s modes, Carnado, is unlike any other demolition experience. 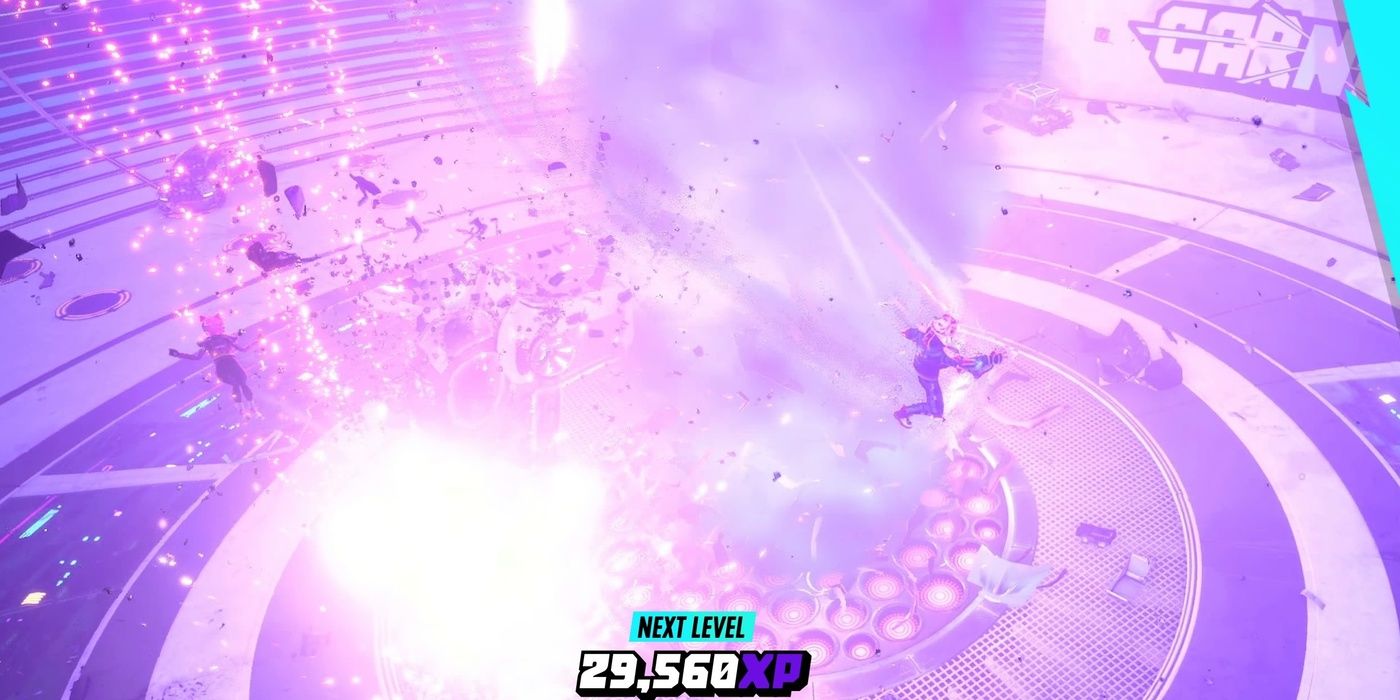 The objective of Carnado is to score more points than the opposing team. Each team has eight players, all vying for domination by hitting enemy characters and vehicles to earn gears. Taking the gears into the Carnado banks points for the team. The team that earns the most points in a game wins. Deal as much damage as possible to other vehicles to rack up points quickly. Just try not to get demolished along the way. 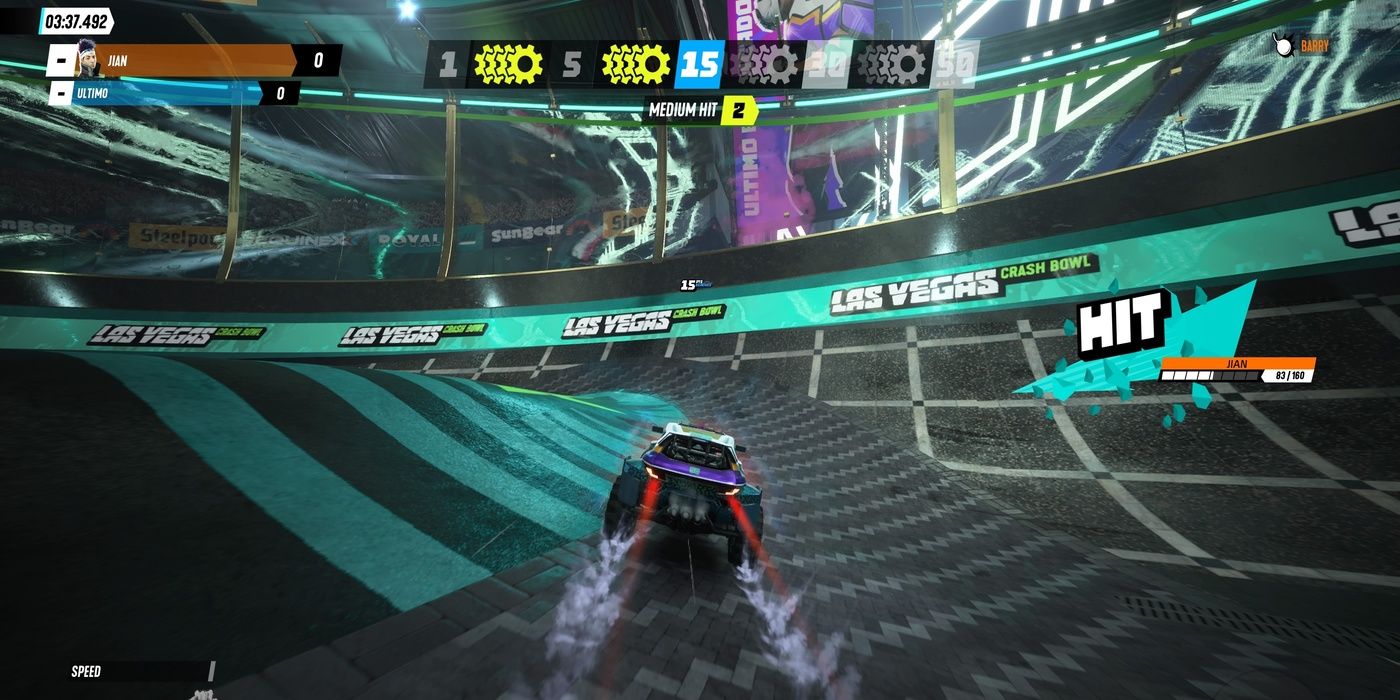 Normal vehicles can hold up to 50 gears at any given time. These gears can be earned by hitting other players and characters. Every point earned is a tick for the gear meter. Get 5 points to move on to the next point tier. Cars save point values at 1, 5, 15, 30, and 50 Points. The highlighted point value indicates how many points players earn.

Whatever point tier was hit last will be stashed in the team’s point bank. Keep an eye on vehicle health meters. Once the car is destroyed, the points go with it. 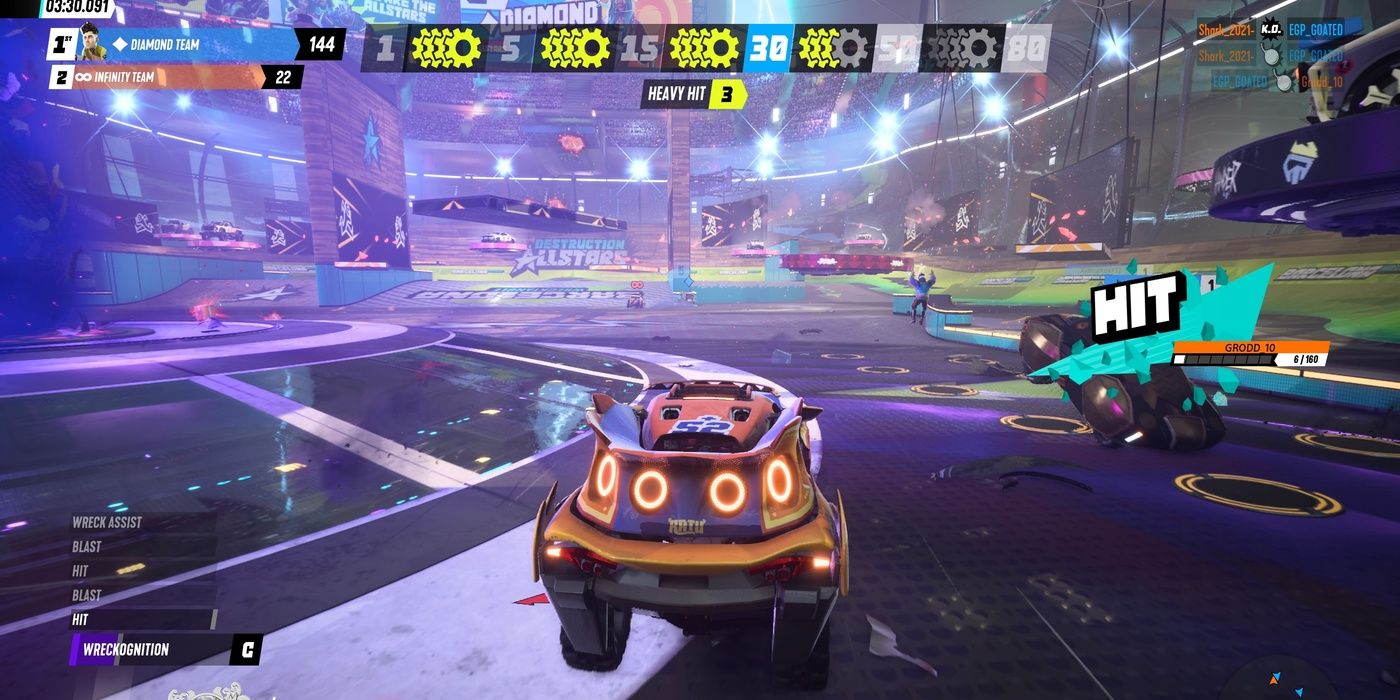 Unlike normal cars, Hero Vehicles can hold more Gears than the standard car. Their maximum storage amount is 80 Gears. Use this extra space to accumulate large bank totals in a short amount of time. If on foot, use Breakers to disrupt opponents and earn a few points. Outside of vehicles, characters can hold up to four Gears. Try not to stay outside too long, as only cars can bank points.

Use Breakers To Earn Easy Gears 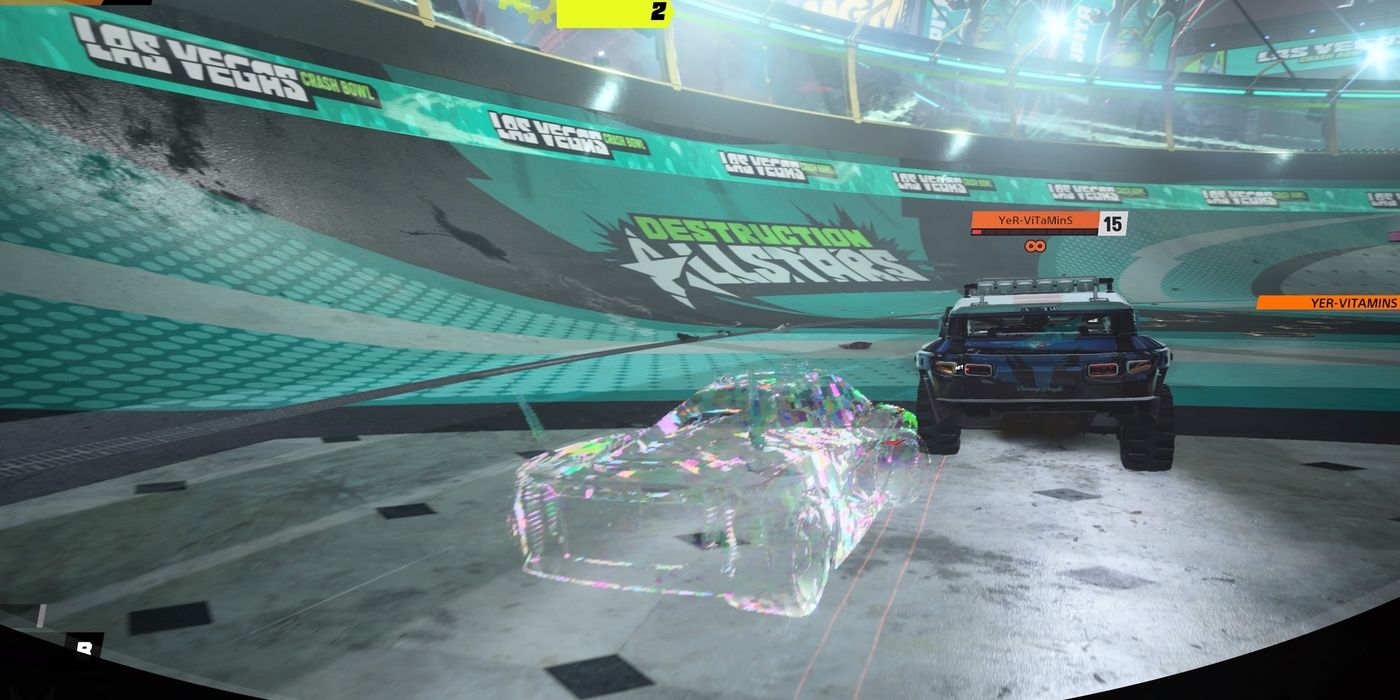 Hero Vehicles have Special Abilities made to wrack up points as rapidly. Target vulnerable enemies and utilize these powerful techniques. Make sure to find a character with a Breaker that fits your playstyle. Shyft’s Cypher Ability makes him invisible on the radar and nearly indiscernible on screen. Those interested in a defensive or calculated playstyle should consider trying his character, while offensive addicts may prefer Lupita’s Wildfire, a move that burns enemies that follow behind her.

Bank Points In The Carnado 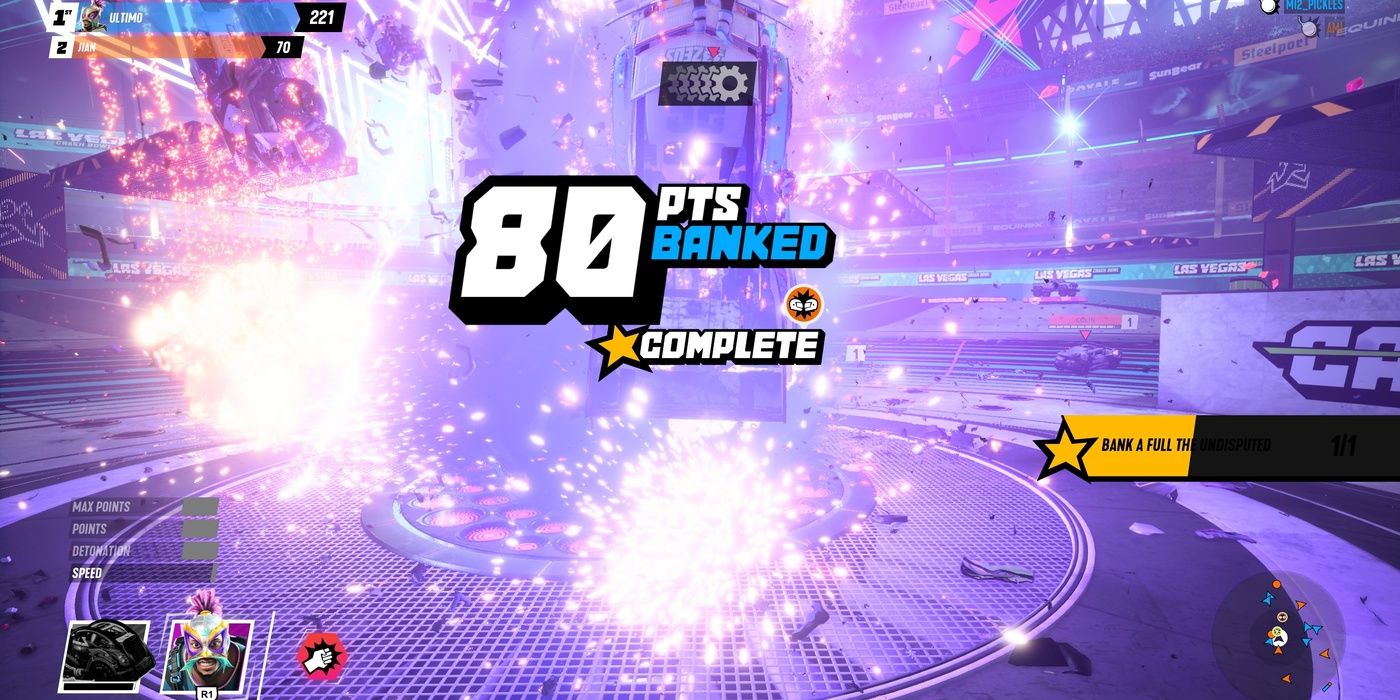 While this tip seems like a given, it can be easy to horde points and try to rack up more. If your vehicle is low on health, bank the points. Every point counts, and other players will be able to see how many points each car has. The more points a vehicle has, the more likely it is that they become a target. Only risk stockpiling points on high health. It’s always better to bank a low amount when vehicle health is dwindling. 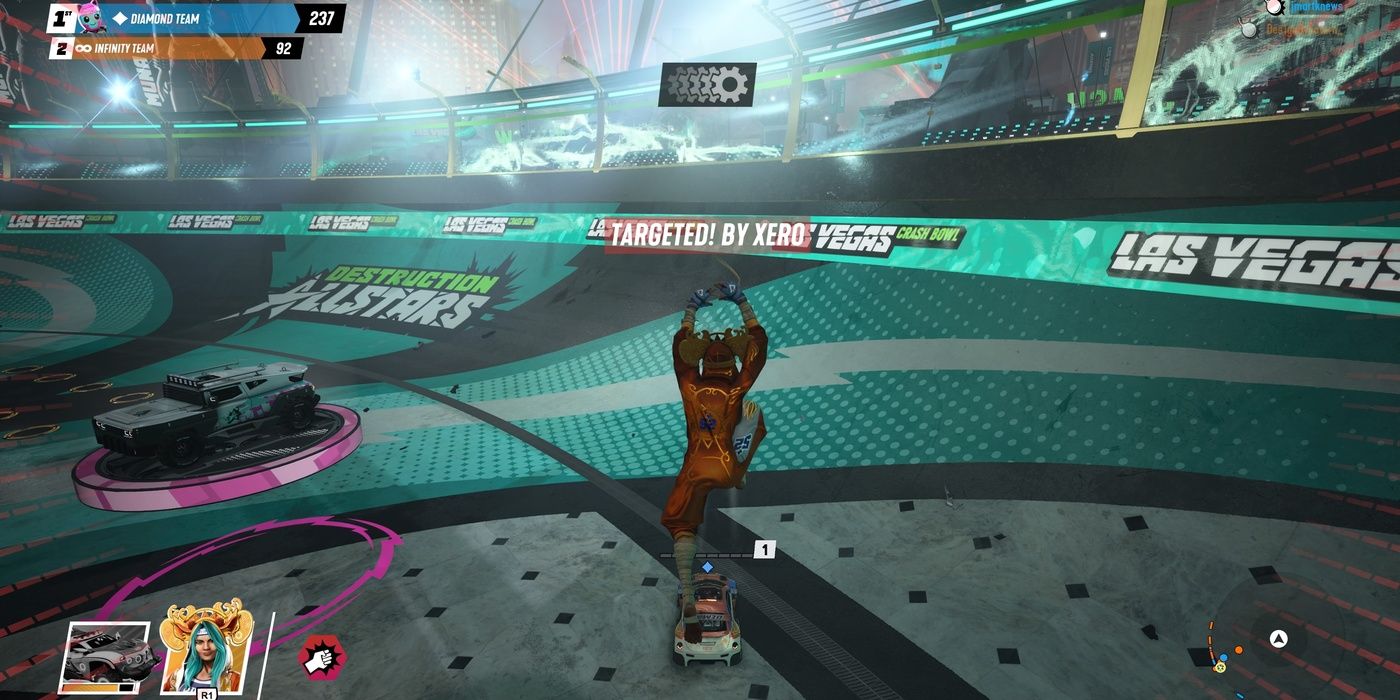 If Should players have Hero Vehicles ready, ditching a car full of points could be tempting. Resist this urge. Abandoned cars hold the points earned when they were used. Opponents can procure these cars and steal your hard-earned points. Take care to guide these damaged cars to the Carnado. An alternative would be destroying the car should banking be impossible. It may get players KO’ed, but it will stop enemies from cashing in on your team’s work.

Don’t Risk Your Life For A Fresh Car. 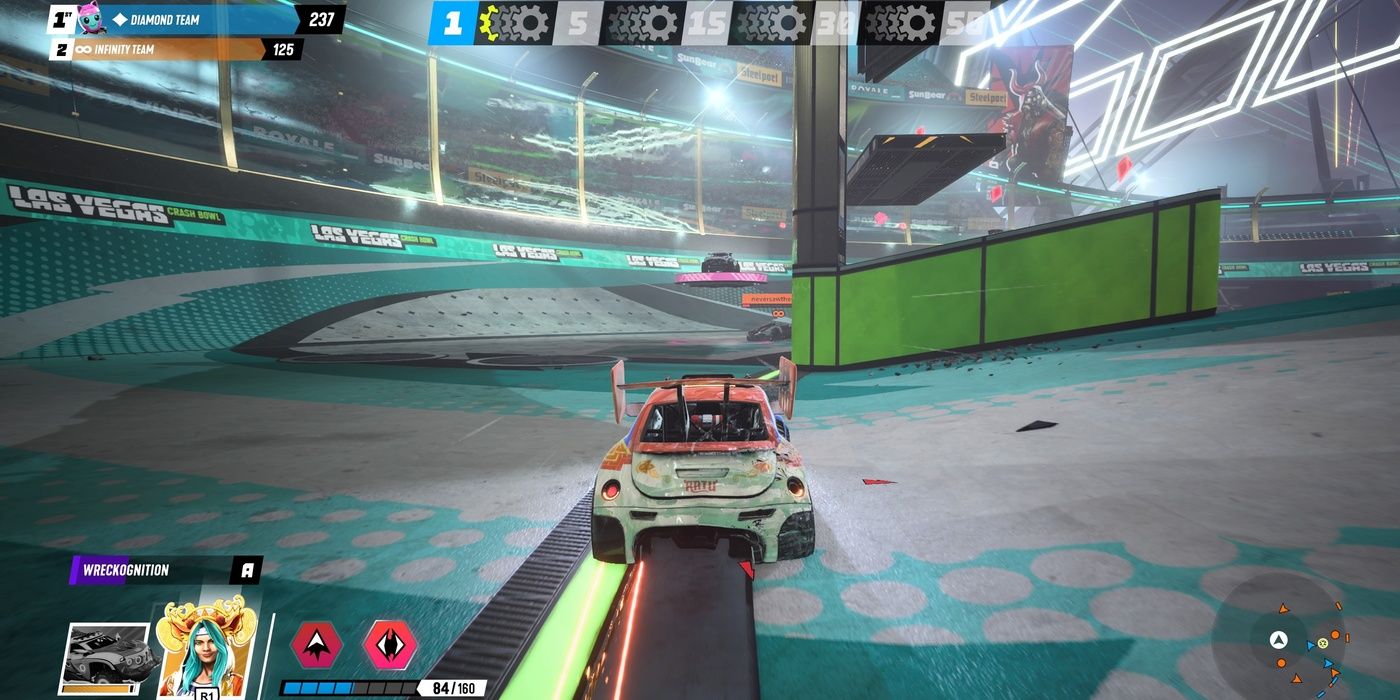 Sometimes cars will take immediate damage from opponents. If this happens, feel free to discard them. Wrecking in a car with no points isn’t worth the setback. It’ll also feed enemies easy points. Hop out and choose another vehicle in these instances. Use the vehicle eject to catapult into the air and reach another ride. It’ll save time and keep player momentum rolling. 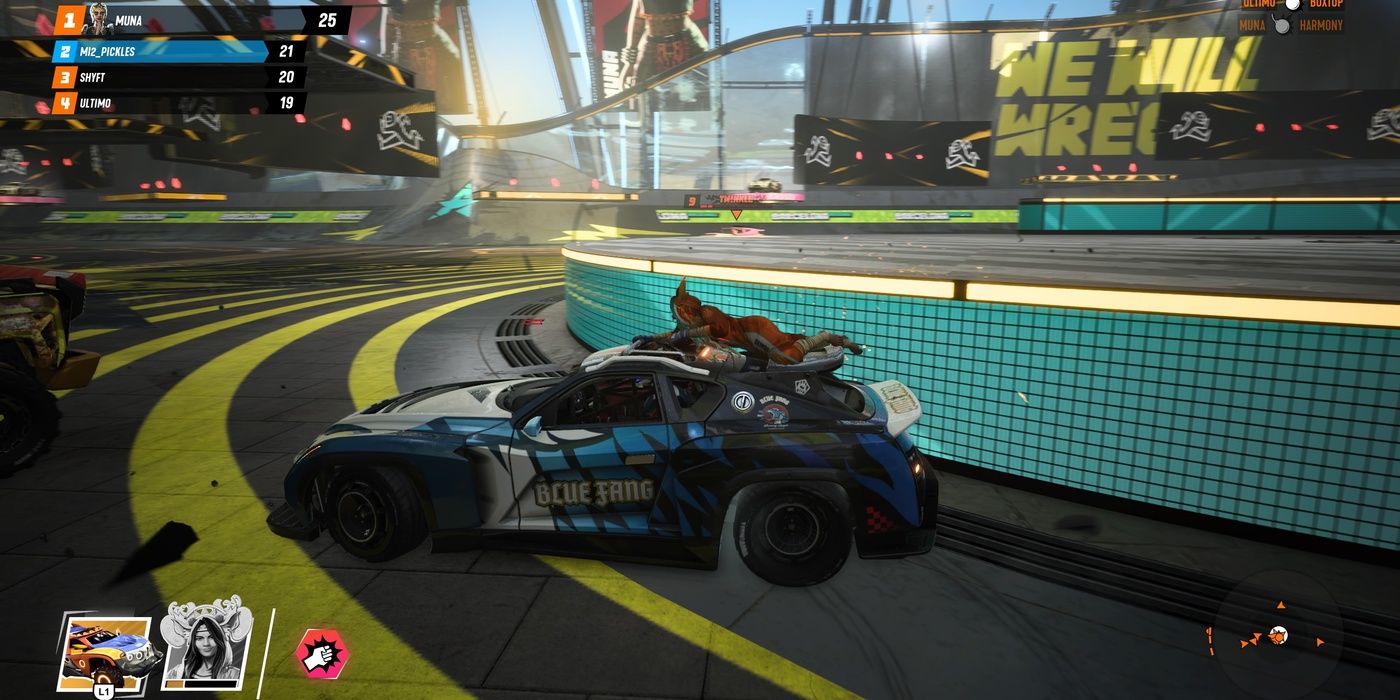 While earning points in cars is important, parkour can result in massive rewards. One way to earn on foot is by performing Takeovers on opposing vehicles. To mount a vehicle, execute a dodge when enemies are close with Circle. Look for red lightning bolts above player characters for an indicator on when to dodge. Follow up with Triangle to ride. Nail the button prompts after hopping on a car to enact a Takeover or Wreckover.

Takeovers are the better option for this mode, as stealing a car means that the points can be taken. The point values of each car can be seen next to PlayStation IDs. Aim for those with the highest stockpiles. 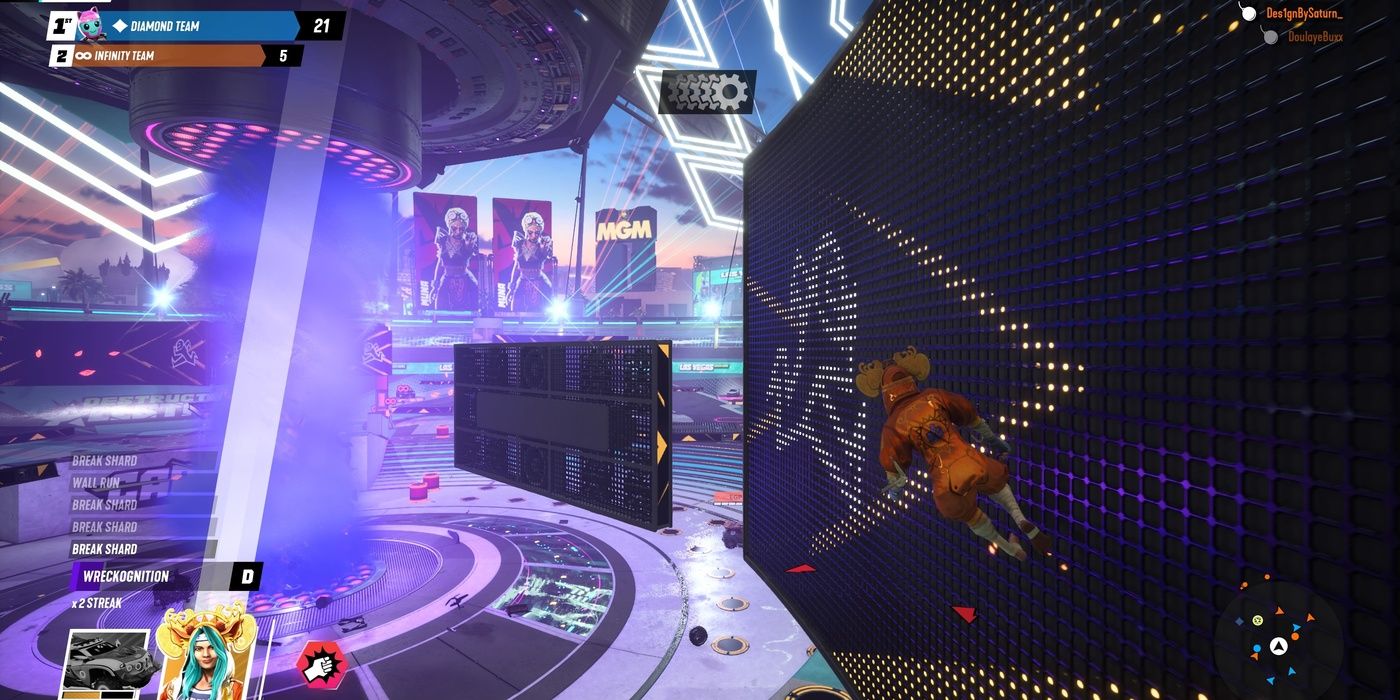 When characters are low on ability charge, it’s a good idea to hop out and secure some Gems, as they bolster recharge rates. These items can only be acquired on foot, making out of car gameplay integral for individual success.

One of the best ways to help out teammates in Carnado is by grabbing the BREAK gems that appear periodically around the map. If teammates grab five of these gems, the entire team receives their Hero Vehicle and Breaker Abilities Immediately. These boosts can turn the tide in almost any match, so make sure to head out of vehicles periodically and gems for yourself and your teammates. 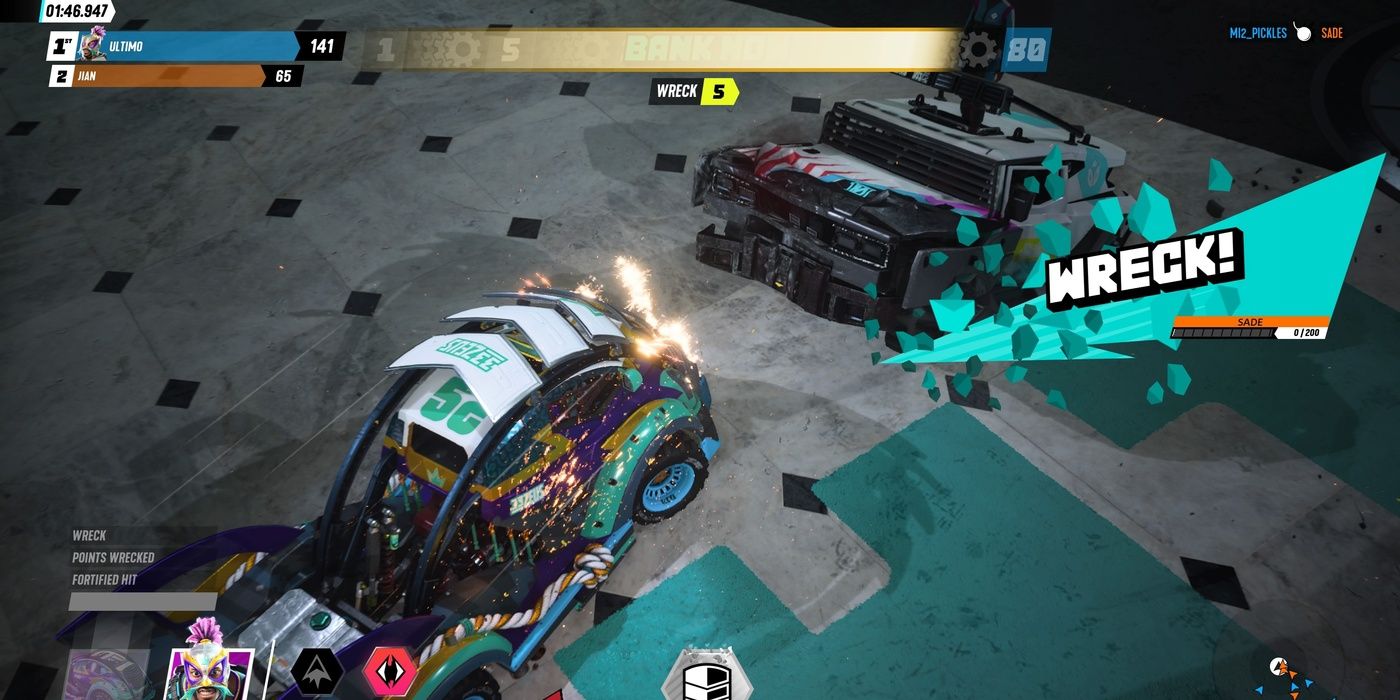 When riding around, watch opponent gear counts. Impeding enemy progress is just as important as securing points. If someone rides by with an ample stockpile, focus on wrecking them. Doing so will wipe their cache out while earning some points in the progress. You may not make any friends doing this, but it’ll get your team one step closer to victory. Keep these tips in mind to dominate in the arena and crush the competition with ease.

Next: Everything You Need To Know About GTA Online In 2021 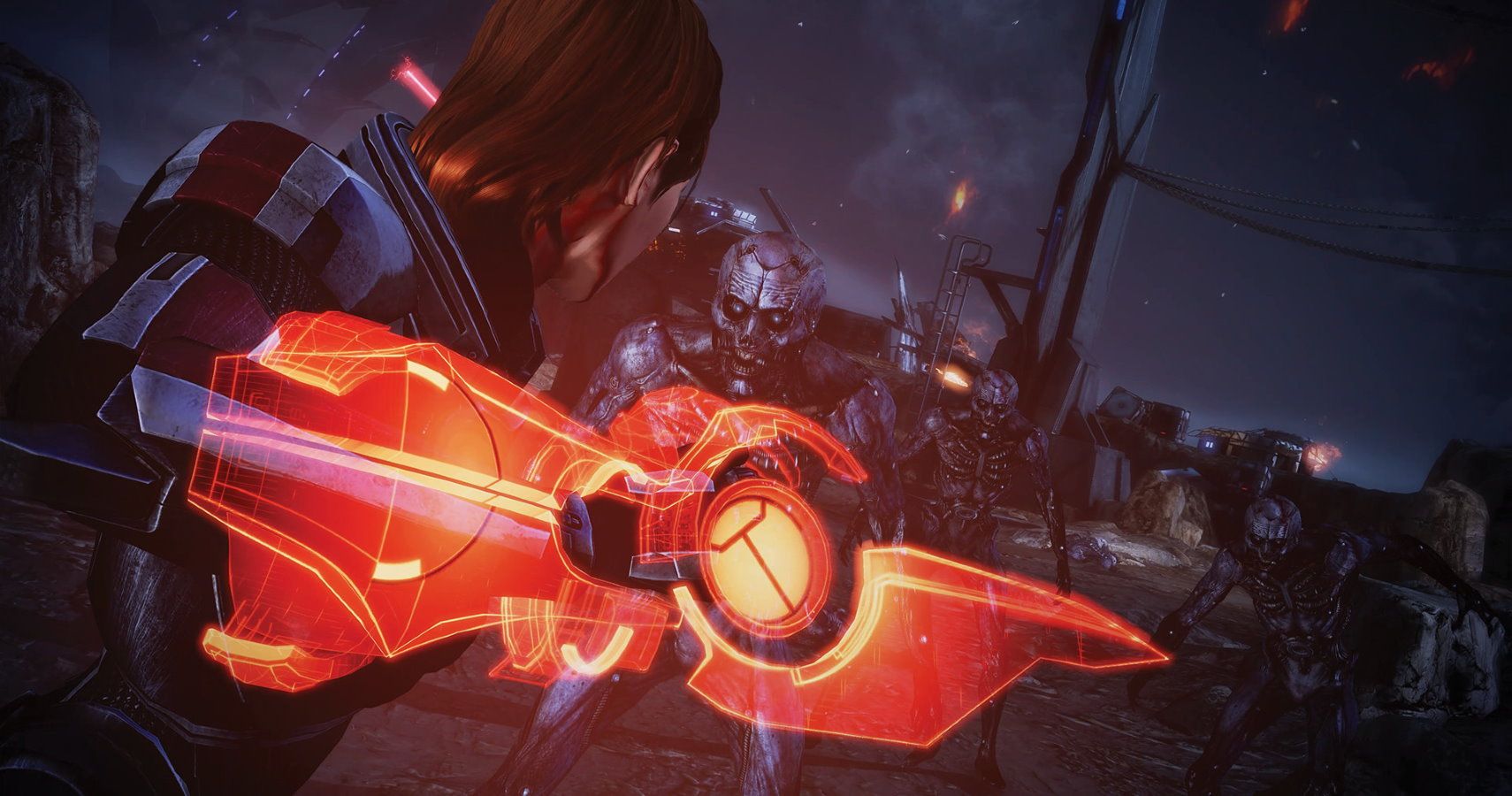