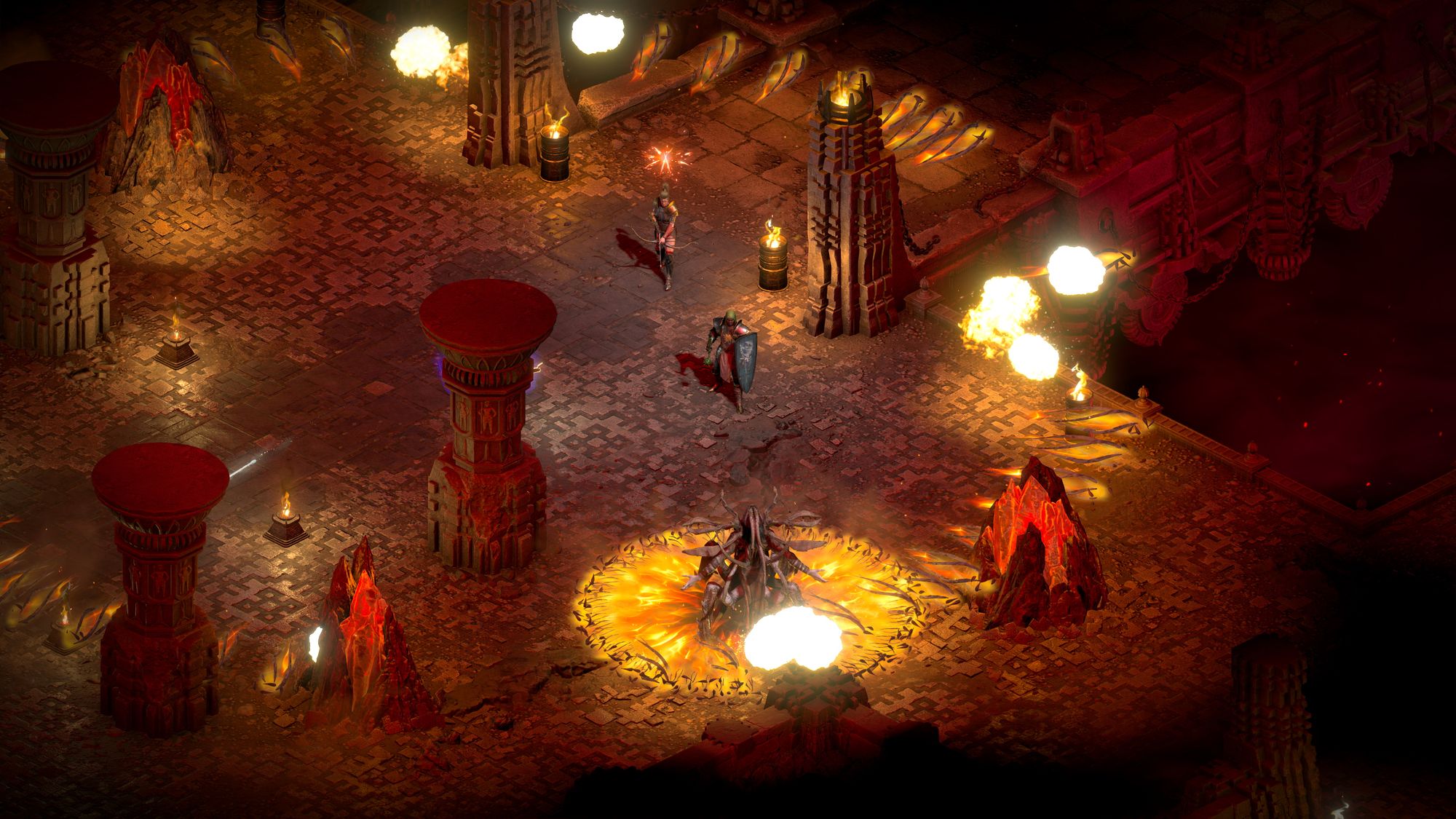 Blizzard remake 20-year-old dungeon crawling classic Diablo 2 for consoles and PC but is it just another Warcraft 3: Reforged?

At this point it’s impossible to start the review of any Activision Blizzard game without reference to the ongoing suite of lawsuits, alleging toxic workplace conditions and widespread discrimination. Considering how few new games the two publishers release each year they’ll no doubt be worried at how all the negative press is going to affect their most important Christmas releases, namely Call Of Duty and this remake of 2000 PC game Diablo 2.

Despite its huge success on the PC, and subsequent influence on the industry at large, Diablo 2 has never been released on any console. Apart from an oft-forgotten PS1 version of the original the franchise as a whole completely ignored consoles until the 2012 release of Diablo 3, and even that was still much more popular on PC (in fact it was the fastest selling PC game ever, at the time).

The reason for this is very simple: the original two Diablo games were originally designed to be played with a mouse and keyboard and, for an action game, it’s very difficult to switch from that to console controls. Diablo 3 managed because it was made with them in mind, but Diablo 2 wasn’t. And yet developer Vicarious Visions has done an excellent job at working round that very serious problem, in this impressively earnest remake.

As relatively minor a franchise as it may seem to console gamers, Diablo is one of the few series left that is so influential that anything similar to it is simply referred to as a Diablo clone. Technically it’s a dungeon crawler – a top-down action role-player – but even if you didn’t realise it, games like Path Of Exile and Torchlight are so similar they could almost be official sequels. At the same time, the game’s general structure and loot-based reward system has been copied by everything from Borderlands to Destiny.

As you might gather by the fact that it’s the sequel and not the original that’s been remade, that legacy is primarily down to Diablo 2, which refined and expanded the formula and is still regarded by many fans as the best entry in the series. If you’ve taken a disdainful look at the screenshots and videos and already decided it’s not for you then older gamers may appreciate the fact that Diablo 2 is basically Gauntlet with stats, with a similar focus on mindless violence and unending hordes of monsters to mow down.

Diablo 2 has little in the way of memorable storytelling but a very distinctive grimdark atmosphere, the softening of which was where the majority of criticism for Diablo 3 came from. Another complaint was the way classes worked, with Diablo 2 encouraging multiple playthroughs with completely different characters, where even the same classes can end up playing very different depending on how they’re equipped and specced out.

That feels less unique nowadays but the difference between playing as a barbarian and a necromancer is still profound, which is especially interesting when you team up with others in multiplayer. Younger gamers might complain that the various class types are completely unbalanced and that’s perfectly true, but again that was part of the charm the first time round. As was the lack of handholding and instruction – although two decades on there’s plenty of that to be found in wikis and other fan resources.

No doubt reeling from the justified criticism of Warcraft 3: Reforged, Blizzard has gone all out in ensuring this is as respectful a remake as possible, to the point where you can swap between the original and modern modes with the press of a button (well, touchpad). Even on a console the original PC version is replicated as closely as possible, including a lower resolution and the chance to play it as if the Lord Of Destruction expansion wasn’t present.

The new graphics are very similar in style to the originals, with a clear attempt to echo the limited animation and detail of the 2000 version. Some may resent the fact that the game is essentially holding back from using the full power of modern formats but rather than just pandering to nostalgia it gives the game a unique style of its own.

Naturally, this all makes much more sense on a PC but there’s only a few points where the awkwardness of converting the original control system becomes a genuine frustration. Picking the right potion in a hurry is awkward and the inventory in general would be a lot easier with a mouse, but it’s hard to see how Vicarious Visions could have done more than they have, with a sensible array of shortcuts and a customisable hotbar that lets you set up your own.

Most console gamers won’t be playing Diablo 2 out of a sense of nostalgia, but many will no doubt be curious to see what all the fuss is about and that’s best experienced if you can play with friends (up to eight of you at once) in online co-op. Unfortunately though there is no local co-op, which is a great shame as Diablo 3 had it and while the original didn’t, being a PC game, it’s the one modern(-ish) feature that would’ve made the remake an even better game.

For better or worse, Diablo 2: Resurrected uses exactly the same design as the original and doesn’t try to add anything other than new graphics and a few control and interface tweaks. That’s not a criticism though and as long as you weren’t expecting anything new this is pretty much as perfect a remake as you could imagine. You’re better of playing the PC version if you can, if only for the mods, but as an explanation for Diablo’s ongoing popularity Resurrected makes it very clear why the game is still so beloved.

In Short: An exacting remake of Diablo 2 that will not only please those that played it the first time round on PC but works impressively well on consoles too.

Pros: The classic hack ‘n’ slash gameplay and loot-based rewards are still as compelling as ever. Great attention to detail in term of the remade graphics and eight-player co-op.

Cons: It’s not the game’s fault but a lot of the gameplay and role-playing elements feel old-fashioned and overfamiliar. Controls only just work on a joypad. No local co-op.