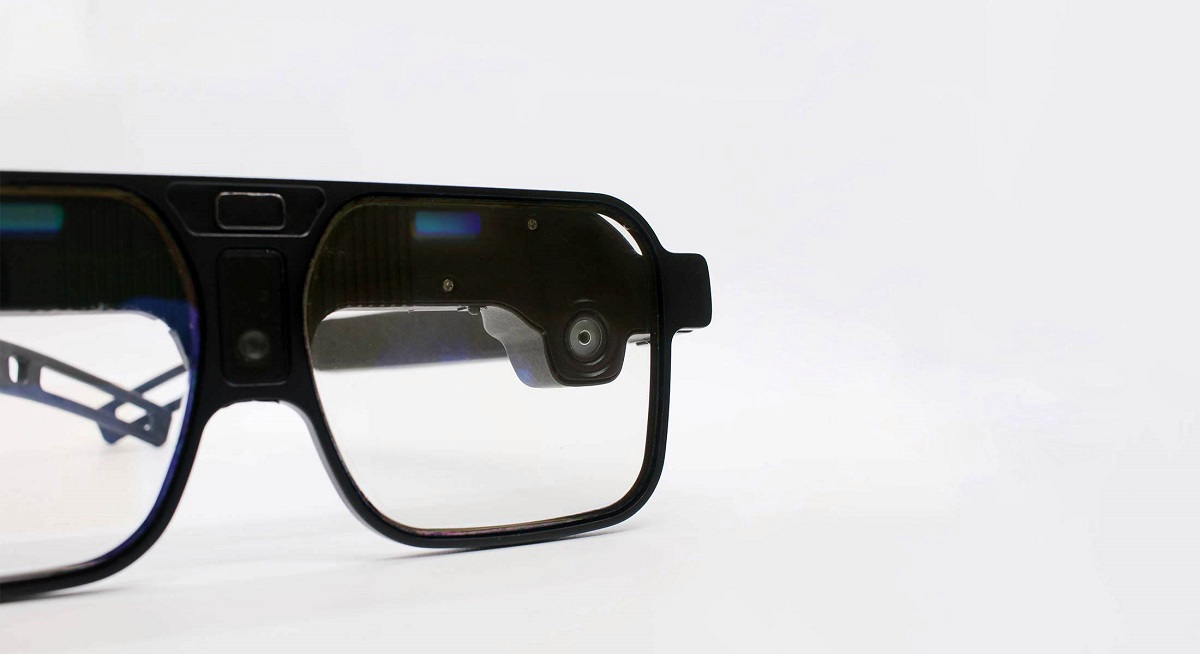 DigiLens is taking the wraps off a new prototype for its extended reality glasses (XR), which will offer augmented reality features, such as overlaying digital images on what you see. The glasses will enable software developers to come up with applications for the final product.

DigiLens CEO Chris Pickett said in an interview with VentureBeat that the Design v1 smart glasses are more advanced than models the Sunnyvale, California-based company showed in 2019. This prototype is based on the latest Qualcomm Snapdragon XR2 platform, as well as the DigiLens Crystal50 waveguide for displaying imagery on the glasses.

The first pair of smart glasses from the Visualize Framework will give content developers, manufacturers, and internet of things (IoT) companies a target hardware platform to design their XR applications around ahead of the launch.

“We believe it’s the most advanced set of XR glasses in the world, with the most efficient 50-degree waveguides in the world,” Pickett said. “We built that purposely so that our partners can iterate to get to exactly the platform that they want to create their software.”

A number of potential customers are working on the technology, using the Design v1 smart glasses as the blueprint for their products, Pickett said. While they’re just a prototype, a number of customers have ordered them so they can proceed with development, Pickett said.

“It’s really a who’s who of the augmented reality industry in the ecosystem,” said Pickett. “Our partners can iterate on the hardware until they get to a point where they’re happy with it. And then we can solidify it into a white label product.”

DigiLens’ premiere product is a holographic waveguide display containing a thin-film, laser-etched photopolymer embedded with microscopic holograms of mirror-like optics. A micro-display is projected into one end of the lens and the optics turn the light wave, guiding it through the surface before another set of optics turn it back toward the eye. DigiLens refined this technique more than a decade ago when it was collaborating with Rockwell Collins to create avionic heads-up display (HUD) systems for the U.S. military. More recently, the company devised a photopolymer material and holographic copy process that enables it to produce diffractive optics with printers, which tend to be cheaper than traditional precision-etching machines.

The new waveguide features 325 nits/lumen (that’s bright), with 80% transparency (you can see through them), a 50-degree field of view, and 400% less eye glow than the next best waveguide-based XR headset on the market today, Pickett said. That last part translates to a sharp screen for the viewer and nearly transparent lenses so your eyes won’t be obscured when you’re looking through the glasses. This enables you to have conversations with people while you’re wearing the glasses, Pickett said. 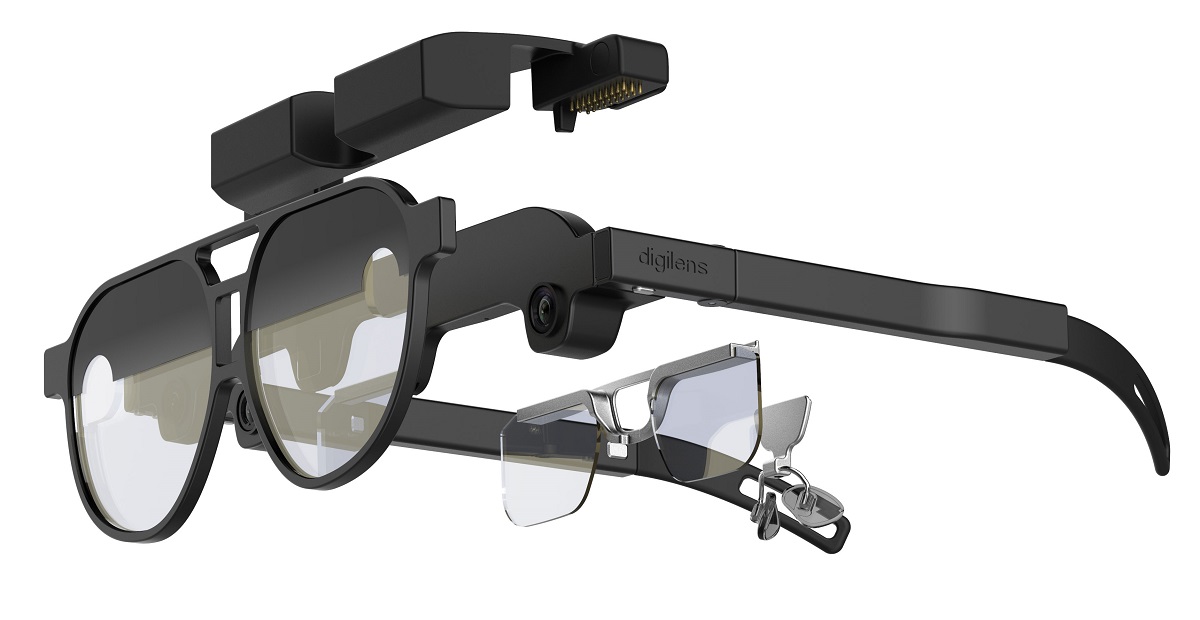 Above: Exploded view of the DigiLens Design v1.

The prototypes have different modules that can be swapped out based on what a hardware company wants to use. That makes the glasses still somewhat bulky, but a final version would weigh less than the prototype, Pickett said. And he said the optical tech in the glasses is the lightest, brightest, and most cost-effective in a pair of smart glasses today. They currently weigh from 150 grams to 180 grams (0.33 pounds to 0.39 pounds). A final version would likely be as low as 110 grams. Normal glasses weigh about 50 grams, so these are considerably heavier in prototype form.

The platform has to balance processing power, battery life, and comfort for the wearer, which is what makes the task of building augmented reality glasses so difficult right now.

Cameras on either side of the lenses add some bulk but enable the glasses to detect your environment so digital imagery can be properly overlaid on real surroundings. One of the components that will shrink over time is the digital light projector.

Design v1 units are shipping now to select partners and will be available in volume by early summer. XR developers are still limited in terms of viable platforms to express their content on, and much XR hardware has failed to ship in any real volume.

The Visualize Framework has been designed to adapt to software specifications, rather than asking developers to fit within the constraints of available hardware. Christian Guillemot, CEO of remote-support company AMA, said in a statement that the prototype is an excellent platform for his clients to create cost-effective glasses with more comfort and processing power. 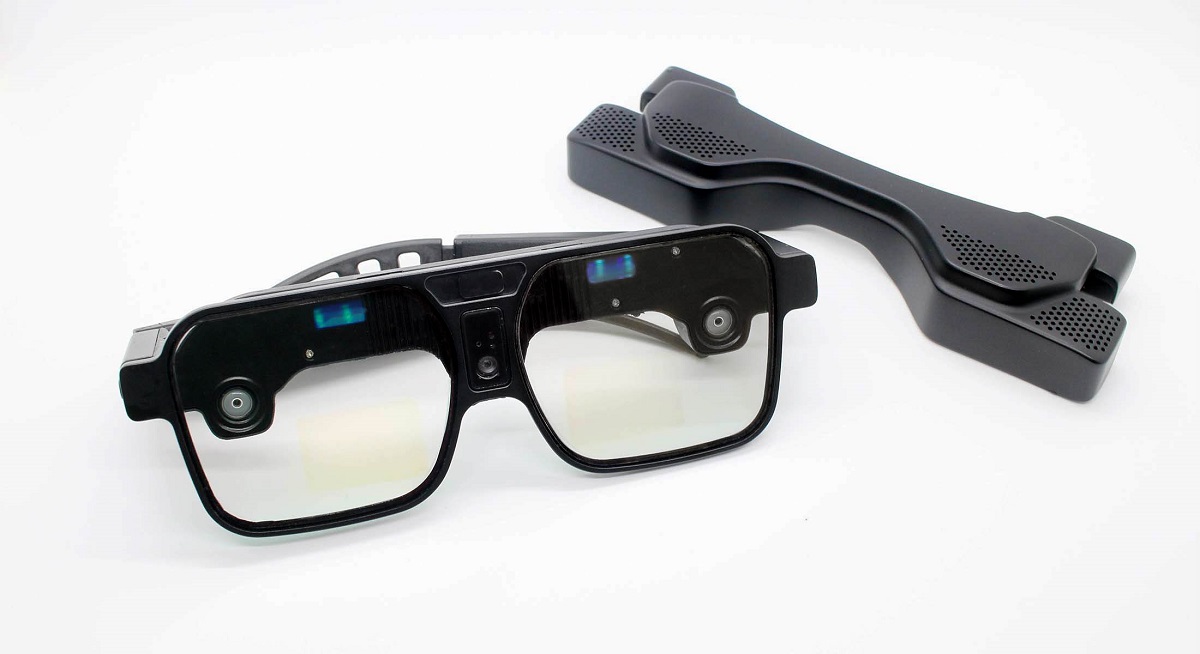 Above: DigiLens’ Design v1 is a modular prototype.

The core technology within Design v1 creates a powerful development platform, and v1 comes standard with DigiLens’ Crystal50 waveguides, the Snapdragon XR2 Platform, and the option for partners to pair to their custom light engine or use the Coretronic 720p projector.

DigiLens’ Crystal50 waveguide has a waveguide efficiency measurement of over 300 nits/lumen with 4 times less eyeglow than the optics in HoloLens 2, which makes it more transparent from the outside than Microsoft’s product. It has a transmissivity rating of up to 80%, meaning it’s highly efficient. The glasses have an eyebox of 12mm x 10mm, a field of view of 44°(h) x 25°(v), 50°(d), with a landscape orientation and a focus distance of infinity. That basically means you can see more of the world around you while wearing the glasses.

Because the waveguide display lenses are attachable, DigiLens can continue to refine their performance and deliver better displays to partners over time. DigiLens Design v1 will be available to qualified partners starting at the end of June 2021.

DigiLens investors include industry leaders UDC Ventures, Samsung Ventures, Niantic Labs, Sony Innovation Fund, Mitsubishi Chemical Holdings, Continental, and more. DigiLens has been working on waveguide optics for the past 18 years. The company has raised $85 million to date and has 80 employees.