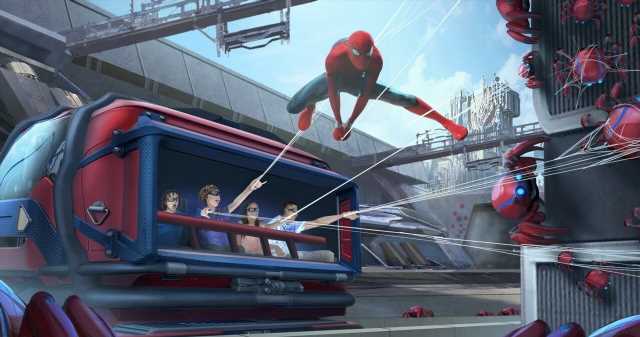 With the Avengers Campus set to open on June 4, 2021 at Disney California Adventure park, Disney has announced an all new way to enjoy one of its biggest attractions. A range of Spider-Man themed toys will allow you to interact with the Web Slingers: A Spider-Man Adventure attraction, by shooting webs.

As announced on the Disney Parks blog, the attraction will allow you to shoot webs via your arm movement and 3D glasses. This way you can follow Spidey along and help him out by webbing up the bad guys, or whatever it is that you have to web up.

However, that’s not all. While everyone on the ride will be able to partake in its interactive nature, you can also spend some additional dollars and get a “different experience”. Basically, you’ll be able to purchase a Web Power Band for $35 which will allow you to use multi-fire webs. Above that, for $30, you can unlock a Web Tech based on iconic heroes like Spider-Man, Ghost Spider, Iron Man and Rescue.

So, depending on the Web Power Band and Web Tech you have equipped, you’ll be able to use different powers when you visit the attraction.

“Spider-Man and Ghost Spider-inspired WEB Shooters change your powers to electro-dynamic webs on the attraction and at home, features lights, sounds, projections, and webs that eject and retract,” says the blog post. “Iron Man and Rescue-inspired Repulsor Cannons change your powers to repulsor blasts on the attraction and at home. They also light up and blast air while you practice your repulsor powers with training spheres.”

Interactivity seems to be a running theme with newly opened adventure parks. As Super Nintendo World Japan cautiously opens its doors, the park will be littered with interactive elements, tied to an accompanying phone app.

One of these interactive elements is a task to collect 170 stamps from all over the park. Other tasks include collecting various items, riding certain attractions, visiting certain areas, etc. These interactive tasks eventually would set up some kind of rewards system, but could also act as a feature to garner returning customers.