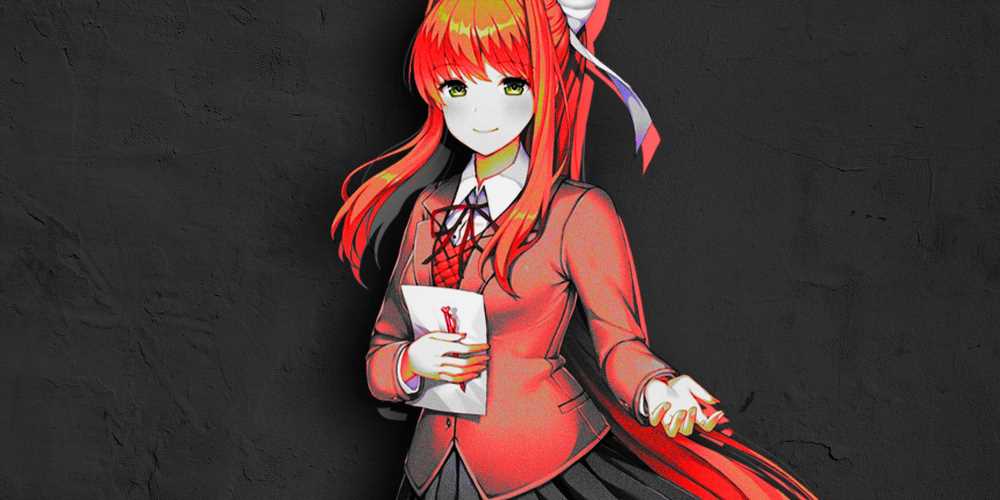 There is no shortage of horror video games. In the days of the PS1, the restricted vision suited the horror scene, with developers favouring reasons to include thick fog or dark shadows to obscure the fact the games couldn't render more than five steps in front of you. Even as technology has improved though, horror has remained a staple. As with movies, low-budget horror has been fruitful for indie devs, while the hyper-violence and penchant for blood and gore we see in gaming also makes for fertile ground to plant monstrous terrors from our darkest dreams. However, one of the scariest games we have ever seen in the medium comes in the form of the ultra-cute and extra sparkly Doki Doki Literature Club.

The best way to play Doki Doki Literature Club is to go into it without knowing much, so I will tread lightly here as a brief overview. I'll get into spoilers after this paragraph, so you can return to this page after playing Doki Doki and subsequently changing your underwear. The basic plot concerns the titular Doki Doki Literature Club, of which your friend Sayori is a member. She brings you to the club one day, where you meet the three other members; the tomboyish Natsuki, the shy and studious Yuri, and the mysterious and confident Monika. Throughout the visual novel gameplay, you will make friends with Natsuki and Yuri (making choices of who to spend time with and what to do with said time), while Monika mainly keeps to herself.

Spoilers for Doki Doki Literature Club from here on out.

As you're likely aware, given you've ignored the spoiler warning, midway through the game Sayori hangs herself, and you discover her body. It's a well-crafted scene – there's clear shock value in the moment, but Sayori is given a solemn amount of respect as it walks through the signs that, enamoured by the new girls, you ignored. It stops short of blaming you, but not without delivering the message that it's important to check in on those cutting themselves off. I'm of the opinion that the graphic warning at the start of the game dilutes the overall impact, given that the whole premise is that it appears to be a kawaii book club tale then goes dark and grisly, but even with that, nothing prepared me for what came next. 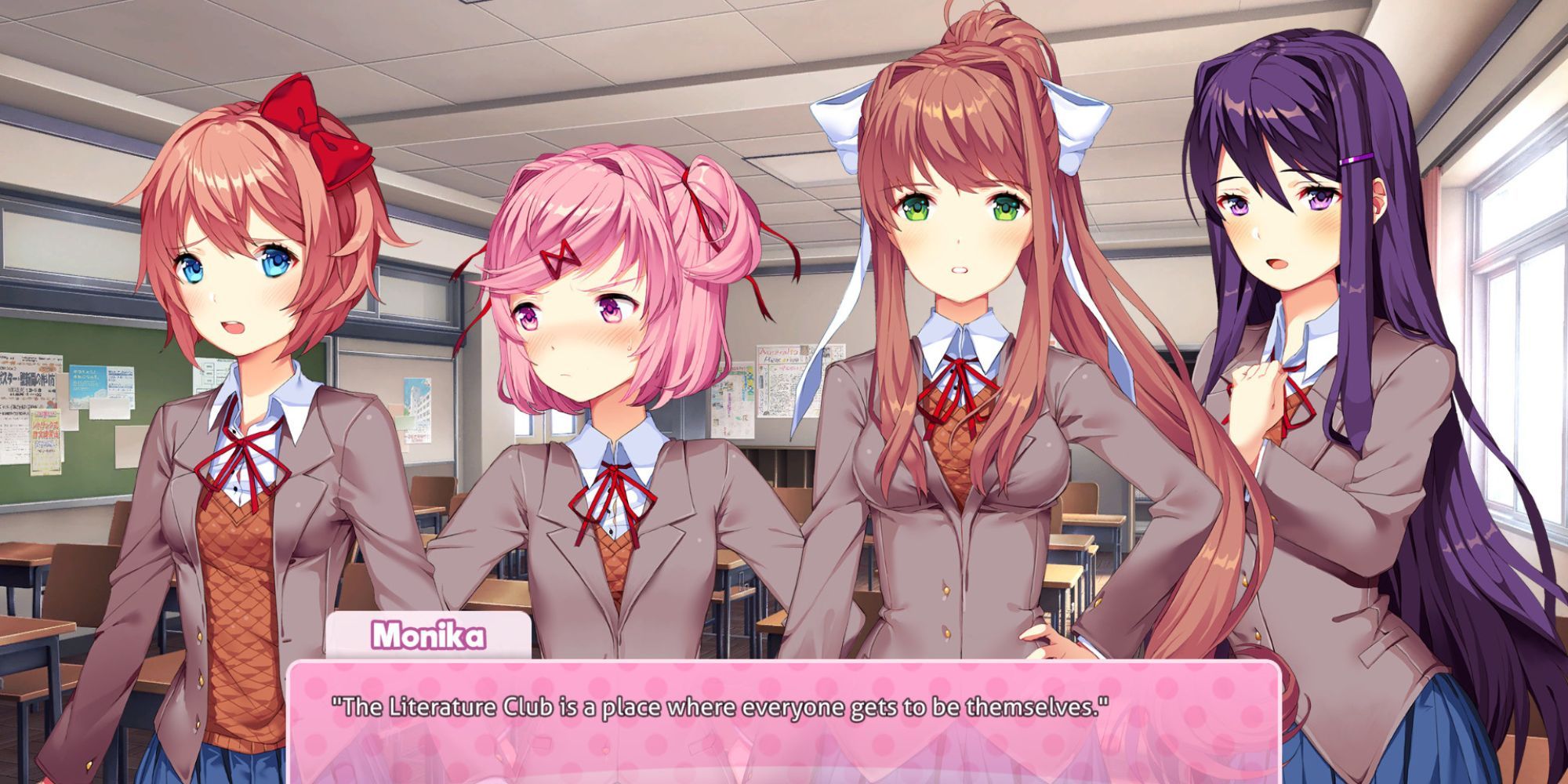 Seriously now, we're getting into the proper grown-up spoilers now. You better have played the game rather than just using me as an easy plot summary.

Once Sayori dies, your game begins to break. It crashes randomly, reloading with horrific visions and screams, and characters begin to turn extreme. Yuri, the sweet natured bookworm, borrows your pen and then tells you she masturbated with it because of her undying love for you. Later, you'll be asked (as usual) to choose your companion for the next event, but the game will force you to choose Monika. Yuri, in a fit of rage, kills herself in front of you. The game then breaks again, and when it opens, Yuri lies dead before you. You must wait the entire weekend in the classroom with her, watching the sun rise and set on her corpse because the 'skip time' button breaks. When Monday finally arrives, Monika cheerfully apologises for the boring weekend you've spent, and the true horror of the game unveils itself. 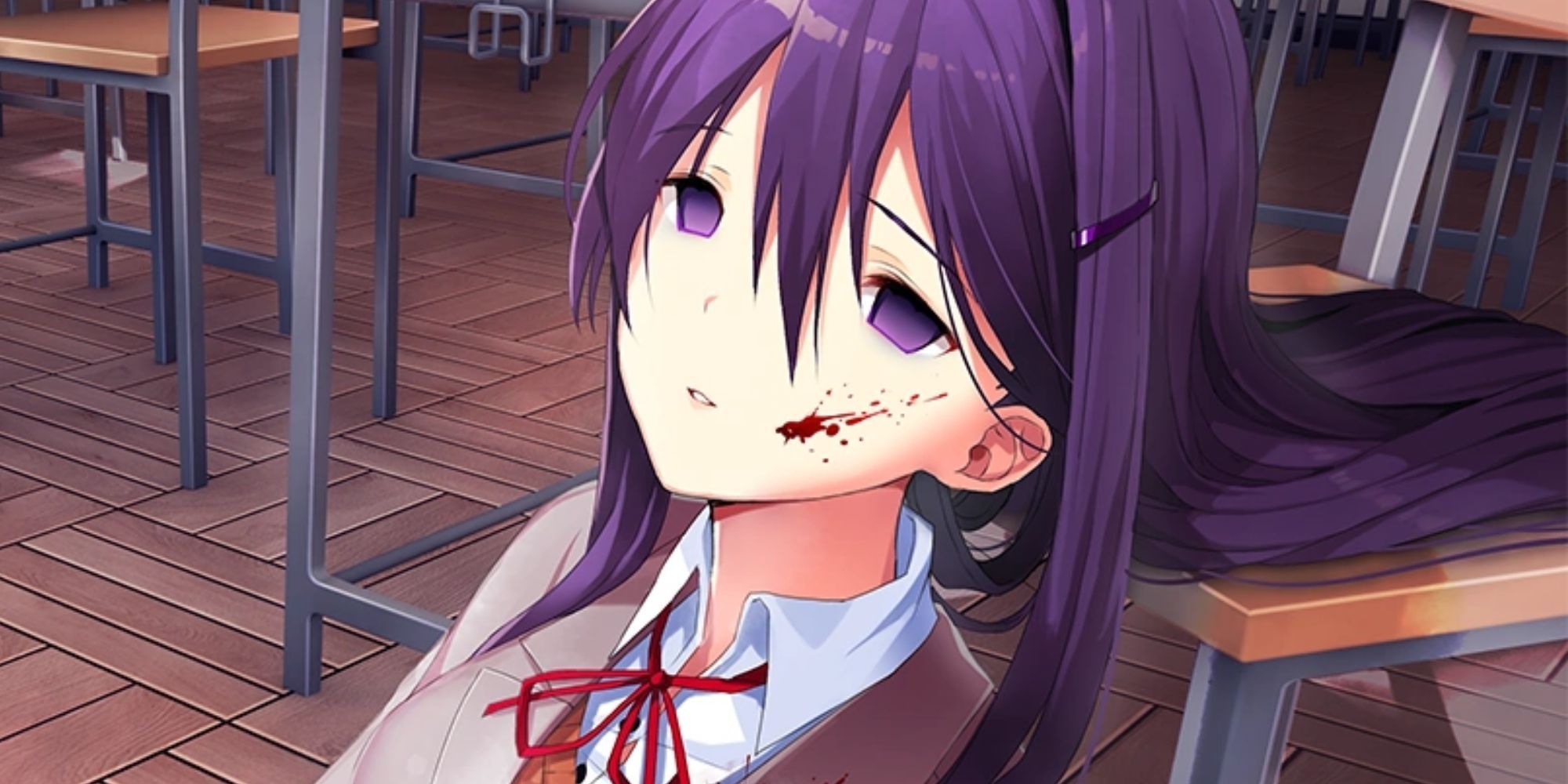 It's in this moment that DDLC elevates itself above being campy, shocking horror and into something, as Jenna Ortega might say, elevated. The entire game, from start to finish, has been manipulated by Monika. She has been breaking your game from the inside. She has been rewriting every character. Somewhere during development, Monika gained sentience and was outraged to discover she was an NPC rather than a love interest, so has been ripping the game apart from the inside. The only way to win is to close the game, head into the files, and delete Monika manually. Doing this takes you back to the start of the game, wherein Sayori slowly morphs into Monika, who has survived her death at your hands. However, Monika will then seize control one final time and delete the entire game for you, telling you "no happiness can be found" in the game, the club, or her own existence. She's a chilling villain who embraces both the abject terror of existence and the unique experiences video games can offer.