Chaosium recently released a free to download 24-page handouts pack for Cthuhlu Dark Ages Third Edition, its medieval TTRPG set in the Call of Cthulhu Seventh Edition mythos. The handouts pack contains game items to give to Investigators during gameplay, some pre-gen Investigator character sheets, and a set of resources for the Keeper of Arcane Lore. The handouts and character sheets can be downloaded from Chaosium’s itchio site.

Cthulhu Dark Ages is exactly what it sounds like – Cthulhu set loose in the historical Middle Ages between the fifth and fifteenth centuries. Like the other Call of Cthulhu eras, you roleplay as Investigators on the trail of the mysterious and macabre. Here, however, the world is only lit by fire, and you may or may not be armed with only a sword to help protect you from the ancient horrors in the dark. If you’ve ever wanted to GM or play Dungeons & Dragons on hardcore survival mode, Cthulhu Dark Ages is the game you’re looking for.

The Cthulhu Dark Ages PDF Pack contains an introductory Player’s Guide to the Dark Ages setting, with an Anglo-Saxon-style map of England, a map of the Western Marches, and a town-level map Totburh, an Anglo-Saxon community in England’s Severn Valley. A map of The Monastery of St. Swithun’s, the farm of Eorhelm, and the village of The Gotii are also included.

The Hunt 1 Handout briefly describes an “account of the natives by Gaius Aquilius Collatinus, found among his field notes after his Roman cohort was found crushed in the forest not far from the Severn River.“ And closing out the rest of the pages are six two-page pre-gen Investigator character sheets (Cleric, Guard, Healer, Hearthweru, Merchant, and Woodsman, with a blank Investigator character sheet last.

The PDF Handouts Pack is meant to supplement the Cthulhu Dark Ages core book, recently updated to third edition for use with the main Call of Cthulhu Seventh Edition rules. The core Dark Ages sourcebook features medieval versions of what’s in the Call of Cthulhu sourcebook, including an introductory Player’s Guide to the Dark Ages setting, rules for mounted combat, Dark Age spells and Folk Magic, and of course, a bestiary full of Cthulhu evils. Totburh is also fully detailed, with “interesting characters, dwelling descriptions, and a multitude of plot hooks for Keepers to use and develop.” 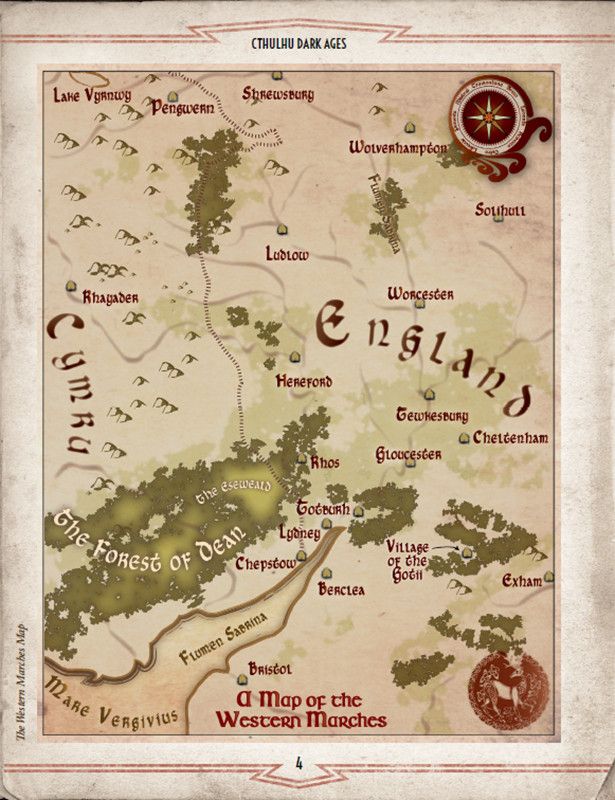 If you don’t yet have the Cthulhu Dark Ages Third Edition, it’s currently available on the Chaosium webstore for $44.99.