Critical Role's world of Exandria is very different to other Dungeons & Dragons settings. Whether you're in the deserts of Marquet or the cold reaches of the Netherdeep, there are lots of terrifying monsters for you and your party to encounter in Critical Role: Call of the Netherdeep.

While some monsters are tightly linked to the Exandria setting, others only need a little tweaking to slot nicely into your ongoing campaign regardless of if it's in Exandria, the Forgotten Realms, Eberron, or your own world. Here are the top five monsters from Call of the Netherdeep, perfect for you to throw at your unsuspecting party. 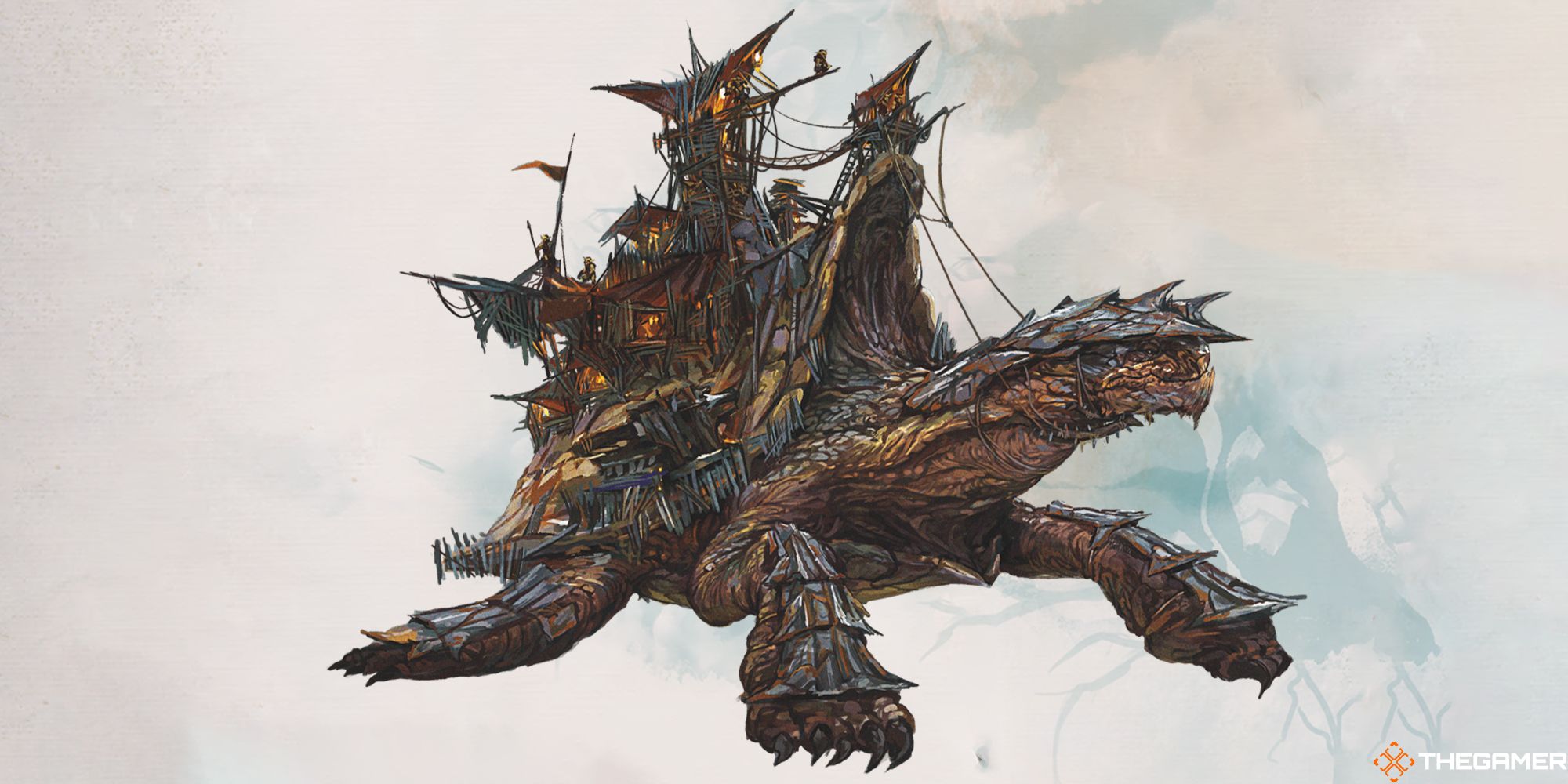 The Horizonback Tortoise is a gargantuan tortoise that marches through the swamps and Badlands. Over the centuries, the residents of Xhorhas have grown to respect and live alongside the Horizonbacks, building entire homesteads on their shells that serve as great, easily defended homes.

Fortunately, the 50-foot beast isn't particularly aggressive, as they tend to feed on dead plants over unlucky adventurers. But it has been known to eat meat, and its massive HP and reasonably high challenge rating can make taking it down a rough time for the heartless parties that want to take it on. Those who don't can find a way to use its bulk and strength to their advantage, as it can carry many tonnes on its back. 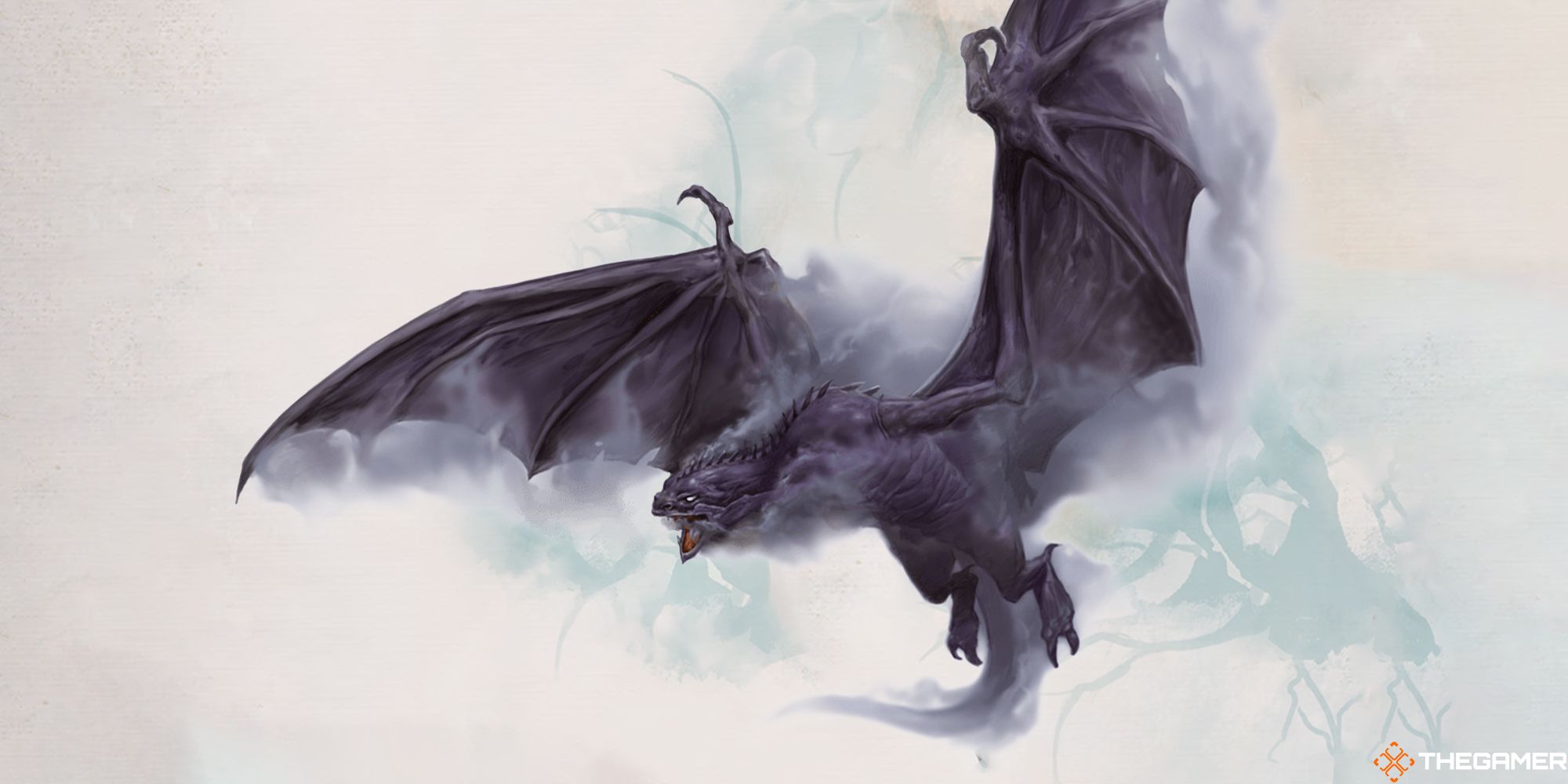 Not to be confused with the Gloom Stalker rangers who explore the Underdark of the Forgotten Realms, Gloomstalkers are the scourge of Exandria's skies. Part wyvern, part bat, part shadow, these creatures can paralyze anything in range with a single, horrific shriek, before descending to attack in a flurry of claws and teeth. Even scarier is their ability to teleport thanks to the Shadowstep bonus action, meaning your party can never be entirely sure of where it's going to attack from.

Though you may find lone Gloomstalkers in the dark areas of Exandria, they're much more dangerous groups. Particularly large ones are known as "Frenzies", and can include ten or more Gloomstalkers in a horrific maelstrom of shadowy wings. More importantly, a Frenzy is seen as a bad omen, with something worse waiting just around the corner. 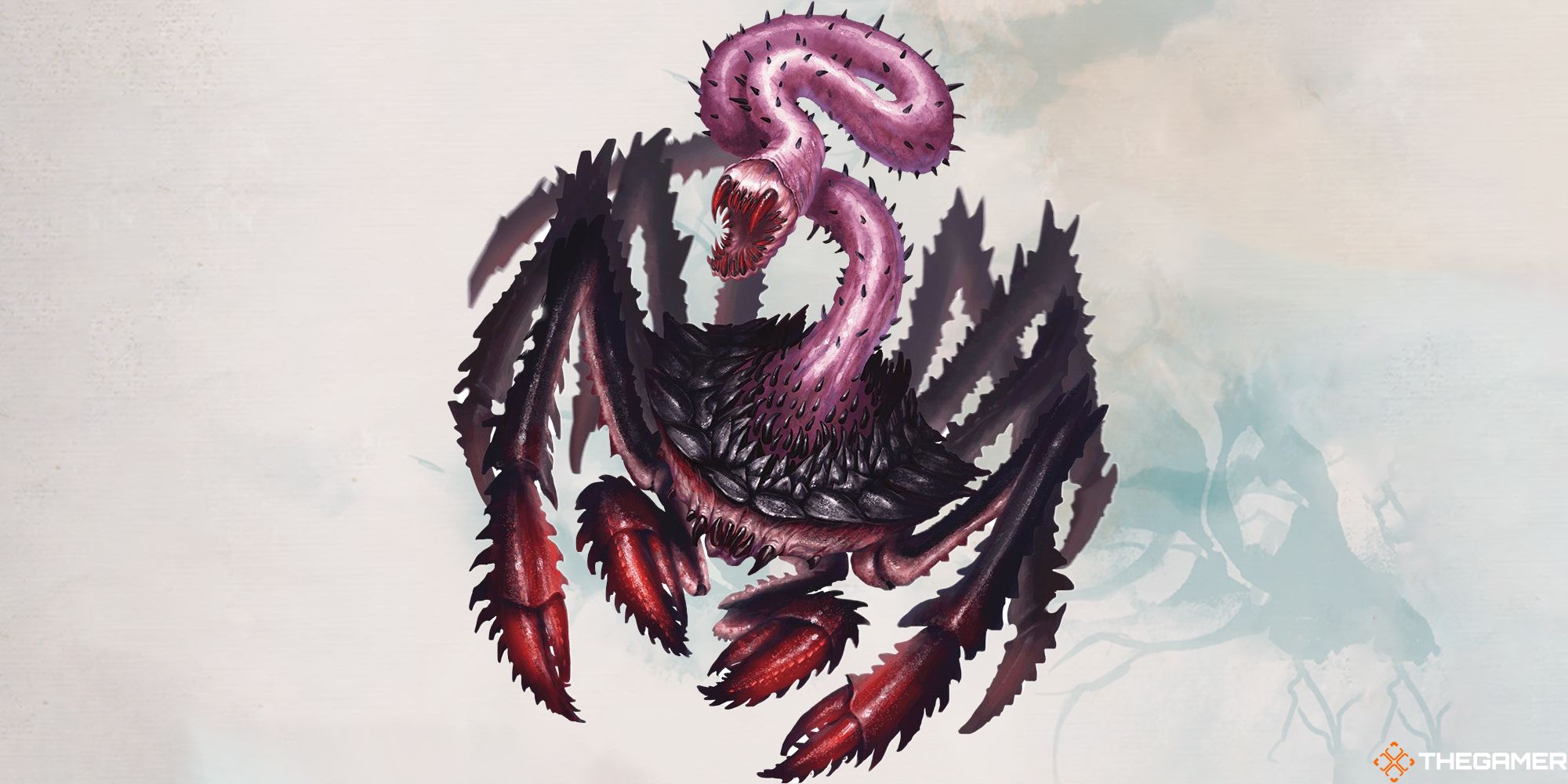 If you're unlucky enough to find yourself at the very bottom of the Netherdeep, it isn't the sharks, jellyfish, and other horrors you have to worry about, it's the Scuttling Serpentmaw.

These tiny monsters don't swim like other things in the Netherdeep, they scurry along the floor with their crabby legs. They are small and relatively weak, and don't post much of a threat on their own with their challenge rating of just four. However, these creatures can work together with their Pack Tactics ability to gain advantage – a whole group of Serpentmaws can easily take down much larger prey thanks to teamwork and the toothy appendages that burst out of their shells.

They're sneaky little blighters, too, thanks to the bonus to their stealth skill. They have the same movement speed as the average character, 30 feet, but can attack with their maw and claws multiple times in one action to cause the most chaos they possibly can. Your party will need to keep one eye firmly on the ground as they trudge across the seafloor. 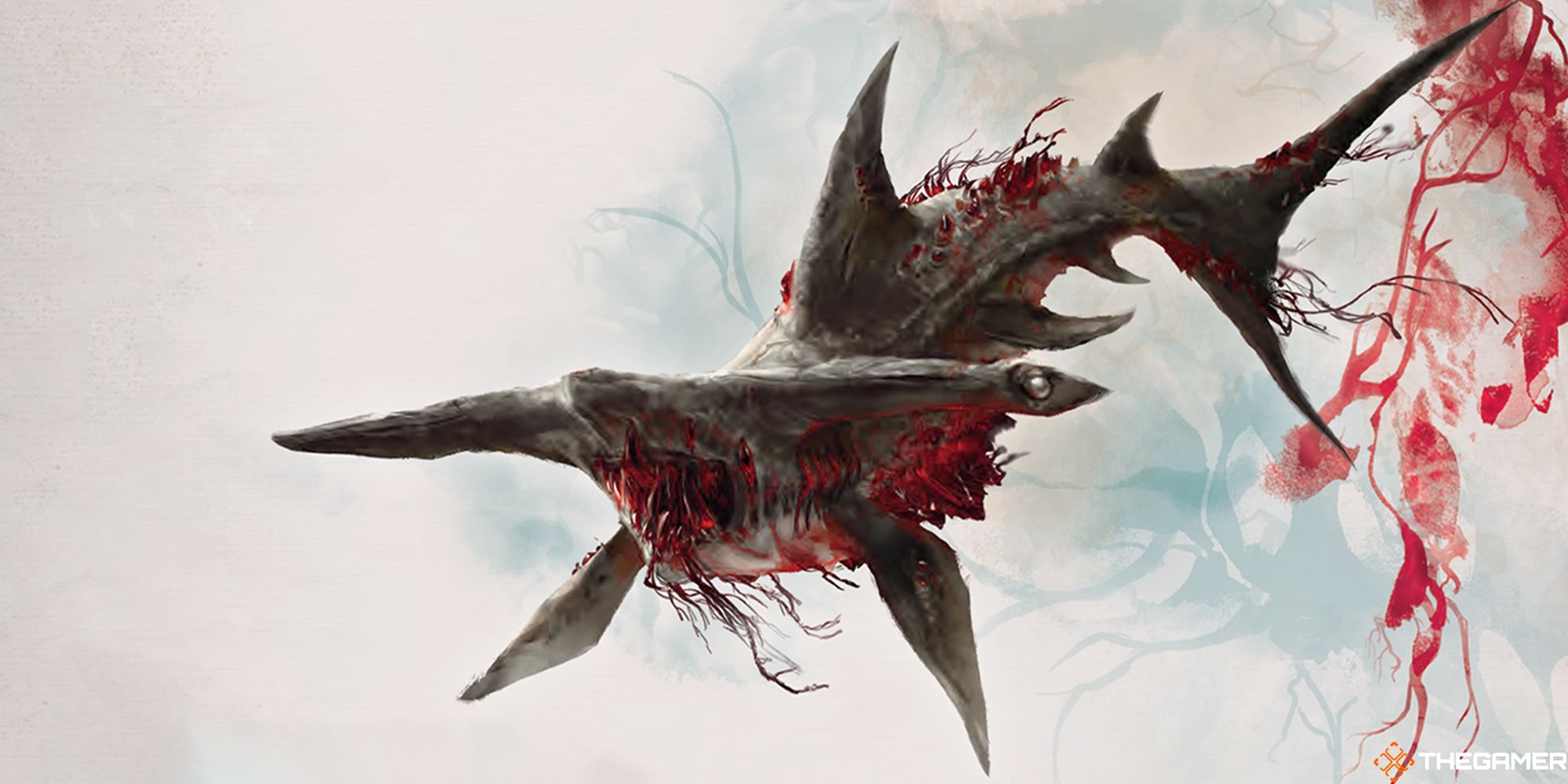 In the underwater hell that is the Netherdeep, strange rubidium crystals have been forming and corrupting the local wildlife. Unfortunately, with so many huge predators lurking beneath the surface, you do sometimes end up with monstrosities like the Corrupted Giant Shark.

This enormous shark has one of the highest challenge ratings in the book for a non-unique monster, coming in at an intimidating nine. It can cause constant psychic damage to anyone within range, before dashing in with its quick swimming speed and dish out a devastating bite attack. Worst of all, it can quickly regenerate its HP each turn, forcing your party to rely on certain types of damage and dealing crits to keep it from growing back in just a few rounds.

As the Corrupted Giant Shark is tied to the Netherdeep's Ruidium, you'll need to do some work when transposing it into other settings. Either you could bring rubidium in its entirety to your campaign (which also gives you access to a few interesting magical items), or you could find a new source of corruption for it instead. 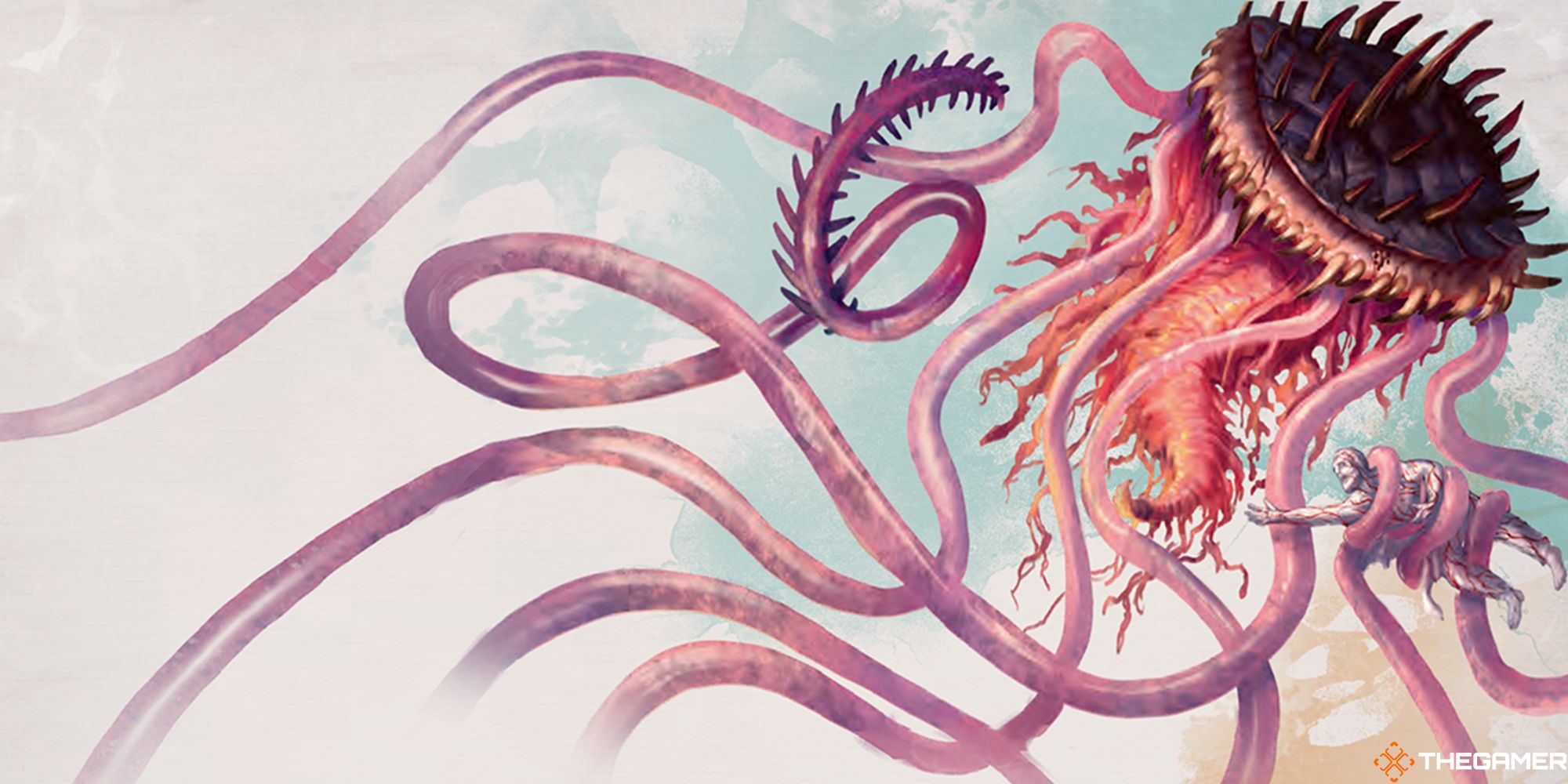 Call of the Netherdeep really plays into its thalassophobic themes with Death Embrace. Far underwater, your party might run into a huge monster that has the spiky shell of a crab, but the sprawling tendrils of a jellyfish. While the Corrupted Giant Shark had an impressively high challenge rating of nine, the Death Embrace has an utterly terrifying rating of 11.

Anyone caught in its tentacles finds themselves petrified to be used as a shield against their party's attacks. It's also incredibly easy to be tangled up in its tendrils, as anyone in range has to make a constitution saving throw every turn or become paralyzed and petrified. The Death Embrace can avoid damage with the Body Shield reaction, choosing to redirect that damage to one of the creatures it has in its grasp, meaning you could be forced to hurt your own allies during your battle with the Death Embrace.

This nightmare's saving grace is that it only really attacks when it's provoked. It would much rather loom in the murky depths of the Netherdeep and grab anything it can, rather than actively hunt down a party. With careful manoeuvring, you could feasibly avoid ever having to fight this thing.