There were two standout demos at last year’s E3. One was obvious, Cyberpunk 2077. The other took me by surprise at the time though. I liked Dying Light, but Dying Light 2 arrived so much more ambitious than I expected, with Techland touting its divergent storytelling paths and evolving world.

That narrative continued at E3 2019. “It’s not about which ending you get, but how the city looks when you finish the game,” said Techland as we wrapped up this year’s hands-off demo—and for good reason, an entire district emerging from underwater as simultaneously a key storyline came to a premature end.

Techland says you’ll only be able to see 50 percent of Dying Light 2 in any given playthrough. I’m inclined to believe them.

Our demo started in The Fish Eye, and immediately it’s clear Dying Light 2 is a tonal departure from its predecessor. The original Dying Light was, like so many zombie stories, about people trying to survive in a newly hostile environment—but Dying Light 2 is set 15 years after the infection. The apocalypse and even the post-apocalypse are over. Sure, zombies still infest the city streets, but society has adjusted and even begun rebuilding itself.

The Fish Eye is a bar. A somewhat seedy bar, but a bar nevertheless. People are laughing, celebrating, and safe. Life feels almost normal, were it not for the rundown décor and everyone’s rustic clothing.

Of course, the situation’s more dire than it seems. Arriving at The Fish Eye, our protagonist Aiden Caldwell angrily remarks to de facto leader Frank, “You haven’t told them yet?” to which Frank replies “What, that the water’s about to run out?”

Frank’s hoping to reach a deal with the Renegades, bolstered by support from the city’s other major factions, the Peacekeepers and Scavengers. Jack Matt’s Peacekeepers are armored in blue, a pseudo police force which cropped up in last year’s demo. The Scavengers are a more ragtag band, but handy in a fight.

And the Renegades? We don’t know much about them, except they’re reputedly butchers, perhaps even cannibals, and that they’re hoarding a huge supply of water. Their leader, The Colonel, is holed up in The Castle—actually some sort of towering hydroelectric plant or water treatment plant by the looks of it—and The Castle is in turn surrounded by a deep moat.

Frank leaves the Fish Eye to negotiate with a dispatch of Renegades, hoping to solve the water crisis. A shot rings out. Frank is shot, and when we reach ground level we see him bleeding out on the ground, the truck full of Renegades screeching away. 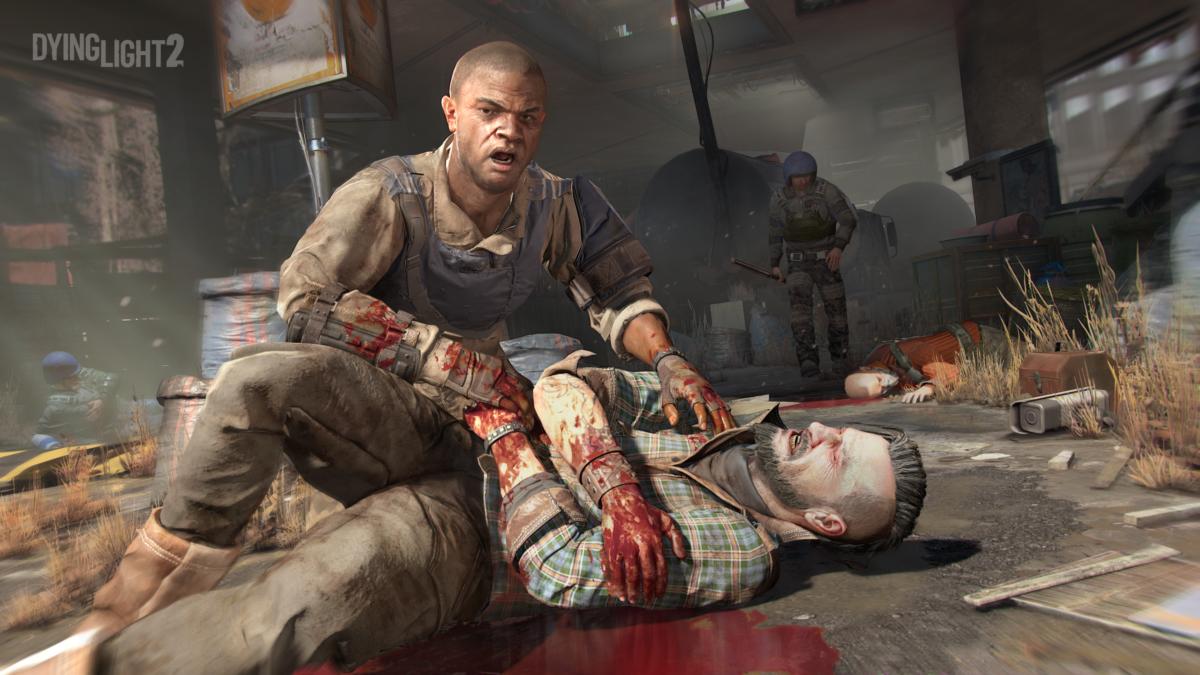 We’ve reached our first decision: Stay and help Frank, or follow the truck.

It’s a binary choice, either push the analog stick left or right. And it’s a difficult choice as well, the first of many. These are an essential part of Dying Light 2’s branching story, with some resulting in different encounters, others changing the world in more drastic ways.

Case in point: We chase the truck and Frank dies. Techland didn’t flat-out say he’d live if we’d stuck around, but did say the outcome might’ve been better.

It probably wouldn’t make for an enthralling demo though. Instead we were led on a merry chase by the fleeing Renegades, sprinting from rooftop to rooftop to try and catch up before it reached The Castle. Along the way we got a taste of Aiden’s new traversal tools, a grappling hook and paraglider. The former seems especially useful, allowing Aiden to both leap across larger streets and swing-kick enemies in combat, provided of course there’s a ceiling overhead.

Techland moved to a new engine for Dying Light 2, which necessitated rewriting all the code for the parkour/natural movement system. Point being, you have more options this time around, and those options flow together a lot smoother. You can use zombies to break your fall, if you follow one off a roof. You can also double-wall-run and wall-jump, and climb objects that are moving or falling apart. It looks like myriad improvements to an already impressive system. 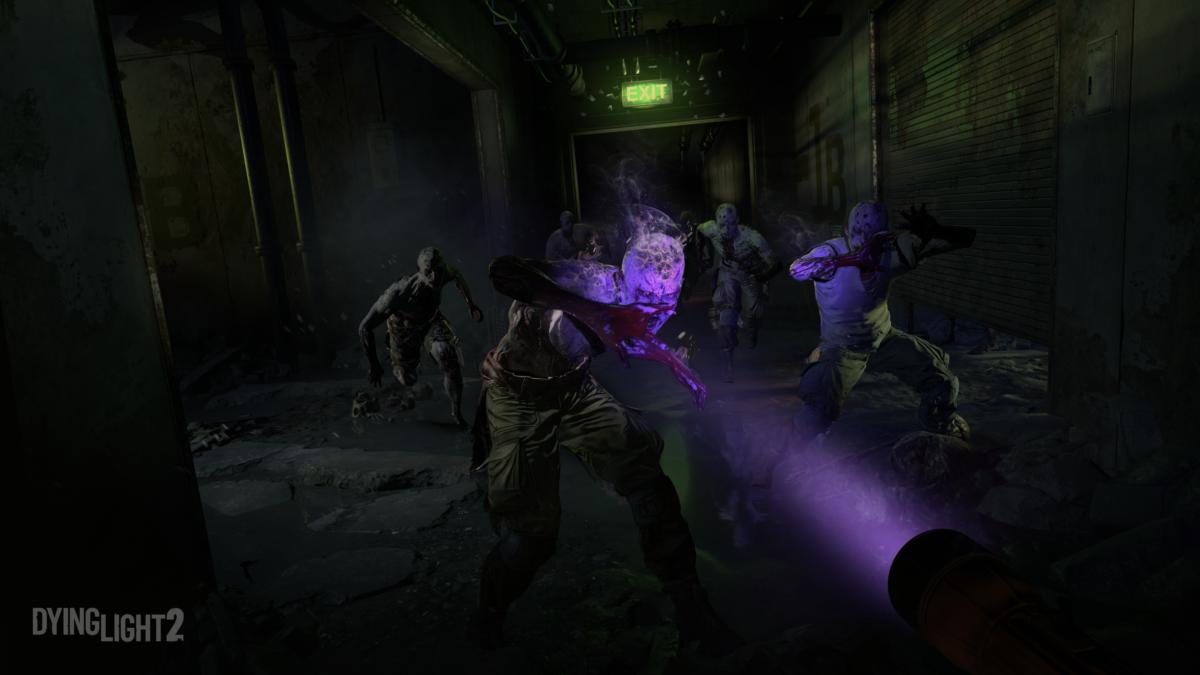 After a forced detour through a darkened building—which, if you remember from last year, means it’s infested with zombies—we finally caught up to the truck and leaped inside. At this point we had another choice, leaving the driver alive or killing him. Then another in short order, as the radio crackled to life and asked for an update. There, we could either tell him what to say or tell him not to answer.

We made it into The Castle without incident, since the driver knew the password to get in—but leaving him alive also allowed him to betray us, honking the horn and alerting the rest of the Renegades as we sneaked through the base. A base that looked a lot more civilized than we were told as a matter of fact, with manicured lawns and people playing with children.

“What’s with the butcher thing? All I see is regular people,” Aiden remarked, acknowledging the situation was suspicious. After escaping pursuit and entering The Castle, we even find a woman playing piano. Cannibals indeed.

The Colonel then walked out, protesting his innocence and saying the Peacekeepers arranged Frank’s death to force the Renegades out of their fortress. It seems plausible enough but for the purposes of the demo we decide to follow orders, turning on the pumps and sending water to the rest of the city—and out of The Castle’s moat, which is revealed to be an entire submerged district, now free to explore. Oh, except some sort of special zombie bursts out of the ground, with spikes on its arm. 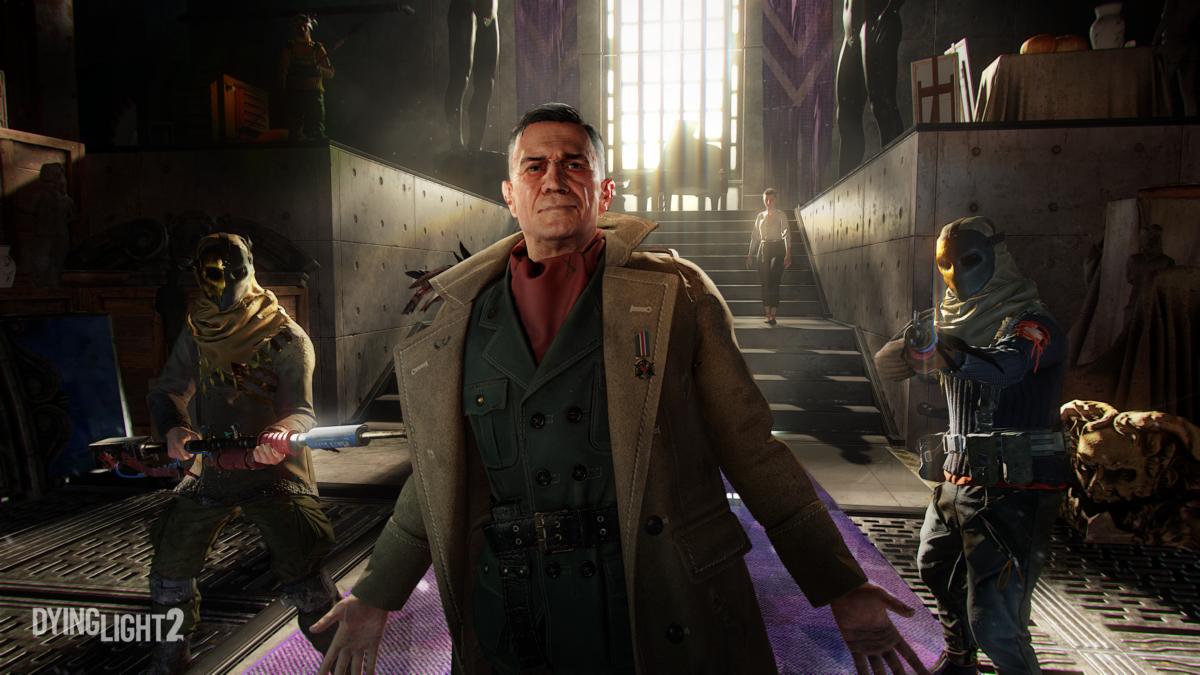 And The Colonel was right, by the way. The Peacekeepers invade the district, presumably killing him. The next time we visit the area, it’ll most likely sport Peacekeeper blue, and come with a lot more rules than before. It’s probably not the path I would’ve chosen.

I used this Techland quote up top, but I think it’s worth reiterating: “It’s not about which ending you get, but how the city looks when you finish the game.” That’s essentially a Dying Light 2-specific way of saying it’s the journey, not the destination, but both our demos have proven the statement true. At E3 2018 we saw how changing who controlled a water tower could change a district, a small decision having a rippling effect. This year we saw how a larger decision could change the entire fabric (and layout) of the city.

Both are impressive, and both contribute to this idea of Dying Light 2 as living world. Plenty of developers say you’ll have an impact on their game, but few truly deliver. Dying Light 2 is melding story and mechanics in ways I’ve rarely (if ever) seen, and if they can pull it off I hope to see others follow. Open worlds have been static backdrops for almost two console generations. It’s exciting to see someone finally do something with one of these sprawling maps.

Dying Light 2 is scheduled to launch in spring 2020.