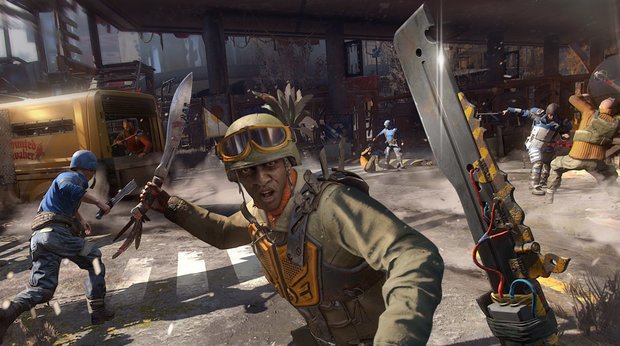 In Dying Light 2, survivors are struggling to stockpile clean water, let alone guns and ammunition. The one gun showcased during our 40 minute demo had a wonky, well-worn look to it and after we’d wrestled it from its owners hands there were only a couple of bullets in the chamber.

However, gripping the barrel, it suddenly became a gnarly club-like weapon used to batter a clutch of unfortunate guards.

The infected make up the final part of this deadly trifecta. This time around they are far more varied, both in terms of their appearances and behaviours. Techland obviously doesn’t want to give too much away right now, though it’s hinting at some pretty big changes with Dying Light 2’s nighttime gameplay.

Then there’s that fourth, phantom pillar. While the original game had an OK-ish story, this time Techland is going all out in its attempts to craft an engaging narrative and an authentic setting for players to immerse themselves in.

With veteran video game words man Chris Avellone on board that goal will be far more attainable, Dying Light 2 already wowing us with its branching story. Characters can die, factions can rise and fall, and your choices will also shape the world around you in other, smaller ways.

Dying Light 2 no confirmed release date as of yet though it is expected to launch in the first half of 2020. Expect the sequel to appear on PlayStation 4, Xbox One, and PC.