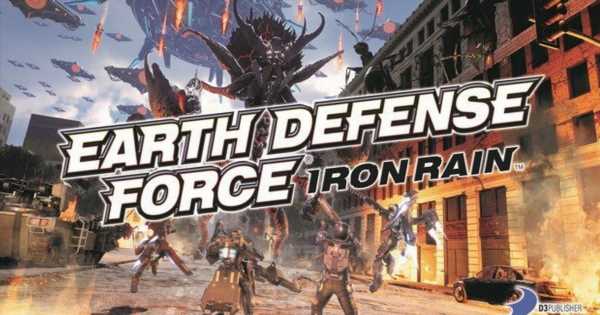 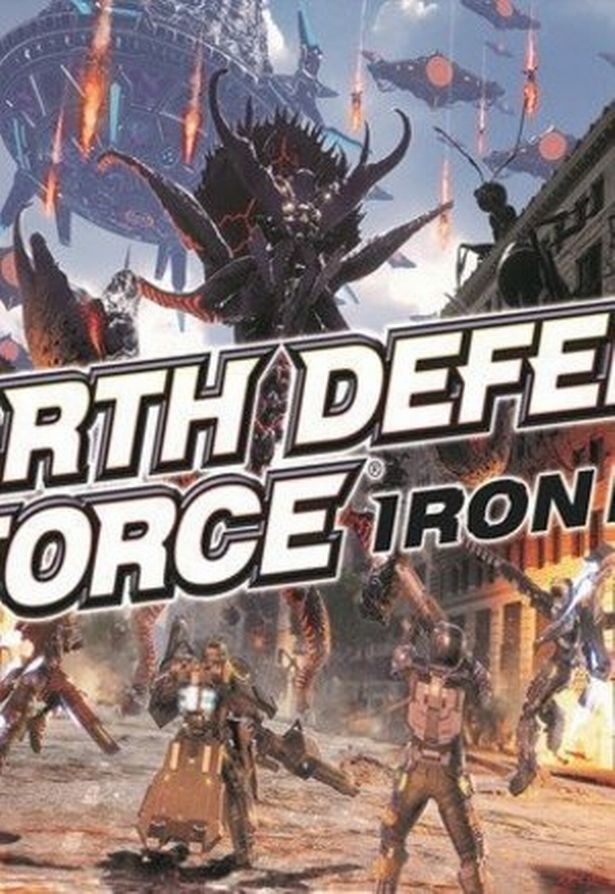 Walking through Jimbocho, the rain hammering my windbreaker, I finally spotted the door to the D3Publisher office. I had to wait outside for the translator to let me in, so I ducked out of the rain and into the mail delivery nook.

The weather couldn’t dampen my spirits for what was to come. I was meeting up with developers and producers from D3P and Yukes to talk about Earth Defence Force: Iron Rain, the latest game set during the insect apocalypse. If you’ve never played an Earth Defence Force game before, let me break it down for you.

Giant bugs have invaded Earth. Horrible spiders, ants and other disgusting creatures are here to wipe out humanity in remarkable numbers. You are a member of the Earth Defence Force, a specialised team created to wipe out the invasion. You achieve this task either solo or in co-op, and utilise a wide range of weaponry, from energy swords to rocket launcher that turns bugs into gooey viscera.

It’s daft fun, and the series has endured for over 15 years now. Clearly, there’s something unique and compelling about the concept of a bug apocalypse. Yet, one critique that is always lauded against the Earth Defence Force series is that it never strays too far from its core gameplay loop, something that the developers have been trying to remedy for multiple generations. Also, despite attracting a niche crowd, the series struggles in the West with attracting a mainstream audience, which can be down to its abrasive graphical style and voice acting, despite its plucky charms. 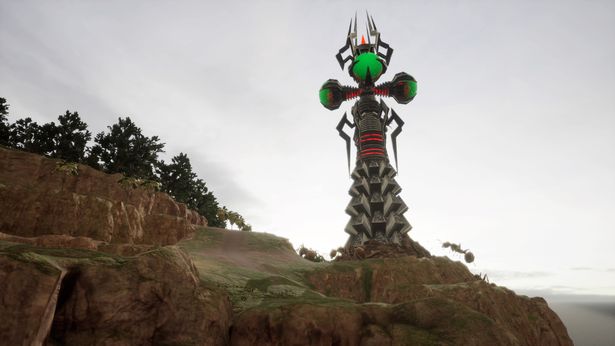 That’s why I’m here to see Iron Rain. According to D3P and Yukes, this is the game they think will attract a Western audience outside of its usual demographic. If you watch a trailer, you can see the telltale signs. Most of all, the game looks far more cinematic and polished. It looks more like a Hollywood blockbuster than a B-movie, despite retaining that charm in its story and premise.

After I was retrieved from my mail delivery nook, I made my way upstairs and met the team. I sat down with a team of esteemed developers from both D3P and Yukes, which included Executive Producers Nobuyuki Okajima, Senior Creative Director Naoto Ueno, Technical Director Shotaro Notsu and Creative Director (and previously, Dark Souls 2 director) Tomohiro Shibuya. A crack team full of talent, they had a lot to say.

The first order of business was my play session with the game, a PS4 dev build where I could test out the new classes and destroy the evil insects taking residence in San Francisco, amongst other Western cities.

The team have an office in LA which is where they grafted a lot of inspiration, with Ueno noting that despite visiting multiple times, he has never actually made it out to San Francisco. He later made it clear that the fact that the city has been destroyed multiple times in movies made them want to use it as a set piece in Iron Rain.

Cinema is a clear inspiration for this title, and it feels like overall, the bar has been raised a little higher than usual for the Earth Defence Force series. “Being in our 30s and 40s, we grew up with a lot of movies like Starship Troopers and Alien in the 80s and 90s, so we got a lot of inspiration from these movies,” the team tell me. “In the movie, you get close to those enemies and fight with them, which is very exciting. We wanted to bring that feeling into this game.” This is so much of a focus that there is an entire level framed in the Nevada desert! 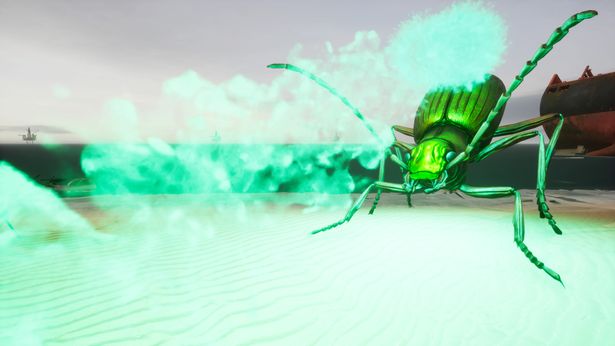 The game looks stunning thanks to the engine jump to Unreal, and the team tell me that they focused on the lighting and shading benefits that arrive from that swap. This all works to curate an eerie photorealistic feel. In previous Earth Defence Force games I struggled to fear the monsters, but in Iron Rain, I let out a convincing yelp when the first spider appeared.

Zipping through the air as the Prowl Rider, I was hanging from skyscrapers and doing my best Attack on Titan impression as I covered my shiny swords in bug meat. The translator told me after a particularly tenuous escape that D3P should hire me to record gameplay footage for marketing, which was flattering given that I’ve only played one or two EDF games prior to this one. I put down my skills in momentum to the muscle memory I had left from playing Marvel’s Spider-Man, which the team list as an inspiration for Iron Rain’s death-defying new class.

This level of verticality and movement tech hasn’t been seen before in Earth Defence Force beyond the jetpack-toting classes of yore. Even then, they didn’t offer such rewarding mobility. I am confident this will be the class many new players gravitate to, as it certainly feels like the standout. This isn’t to say the other classes I played were worthless, as they were certainly more refined and responsive than usual, but for true thrill seekers, this is the chaotic way forward.

I’m told that the Yukes team took their affinity for minute animations seen in the WWE games and applied that to the apocalyptic world of Iron Rain, and that means the charming jank the series is known for has been shaved off in all of the right areas. Similarly, Notsu tells me that they brought their work on WWE to the game through the character creator too, a new feature for EDF that allows players to make their own soldiers. 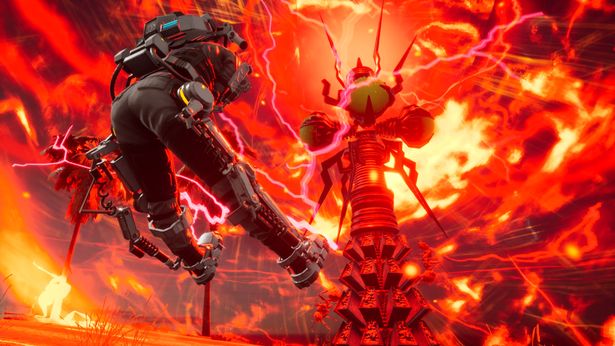 Despite all of the listed changes, it still certainly feels like an Earth Defence Force game, just with a coat of necessary modern polish. Shortly after this answer, I broke into a fit of laughter after Ueno made note that the insects can't come to the office to do motion capture, which, naturally, is one of the harder parts of making the jump from WWE to EDF.

As I carve through legions of ants I mistakenly pull my Devil Trigger, using the Overdrive system that is new to Iron Rain. This is available only one time per mission and offers up blistering speed and strength.

“We wanted to give the player a chance to change direction,” Ueno tells me. “You can change the whole situation if you’re about to die. You’re not just becoming a super character, though, like, imagine if you’re playing Super Mario and you take the star, that’s not always necessarily a good thing. You can fall into a hole or lose a life because you’re too fast and too strong. You could create another risk.”

This is a clever way to look at it, and something I felt almost immediately after I put my foot down on the chaos pedal. I was getting into serious danger to use this feature, but by god was it worth the price of entry.

With an upgrade in engine comes new enemies and even more realistic insect depictions. The team hired the Uber-talented grimdark artists Ryu Obama to work on the game’s iconic foes, which has resulted in further creep factor and some genuine Kaiju that are ready to rock the boat. Yet, in a strange turn of events, the team found that the bugs they’re so viscerally acquainted with can actually be… kawaii? 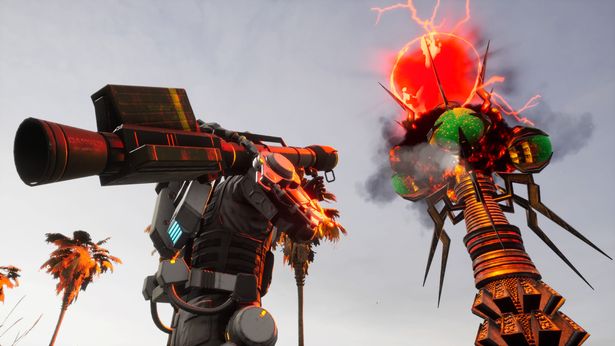 “We wanted to make the new enemies seem photorealistic, we wanted to make real ants, but if you actually look closely at an ant, they actually have quite a cute face, so we had to make it way more evil, so for instance, pulling the eyes stronger or changing the teeth to make it seem more aggressive,” says Ueno.

I’m regaled with a story of one of the art team who absolutely despises insects, and had a particularly rough time with the mood boards and reference pictures in the office. If you take a look at the cover for the upcoming Iron Rain, you’ll see a fairly eldritch looking bug on its hind legs. The team has a soft spot for this foe, who has both human and insect posture, a concept the developers had from the start of development. It took a whole year to get it right, but once completed, the developers noted that watching it move in-game it was like seeing their baby stand for the first time.

As well as new enemies, there is a suite of modes for fresh players to sink their teeth into. The most important one is the multiplayer Mercenary Mode that is new to the game, and apparently, served as the basis for the Iron Rain project, and comes from a player habit all too familiar to series veterans that the developers noticed.

“You leave one enemy alone after the mission, you collect the gems and kind of enjoy your time,” Ueno says. “We knew a lot of people enjoyed that moment. We took that idea and turned it into a multiplayer experience. You’re in the arena with all your friends and plenty of enemies, but your goal is to collect all of the gems.” Okajima tells me this was to target the Western audience.

Wrapping up the hour-long interview, I asked the developers a question that’s been sitting on me since I first heard about this surreal game series. Why do they think a fantasy apocalypse where humans have to fight off bug invaders has endured as a concept for so long?

The answer I’m told is human nature. “It’s hard to say, but I think humans, in general, have some sort of wish to see this happen,” the team tell me. “Especially when you’re super busy, you’re going back to the office and your boss is about to kill you and you hope you get an earthquake or something… people, in general, have an interest in this type of situation. Once this happens, you don’t have to work at all!”

How enlightening! With that, we wrapped up our chat and I was shuffled out into the street, my head full of wonder as I walked towards a nearby konbini which was coated in Tokyo sunset. The Iron Rain had ceased for now, but I was keen to feel it once more. Luckily for us all, the game is headed to store shelves very soon. Look out for the next bold entry in the Earth Defence Force series when it lands in the West on April 11.