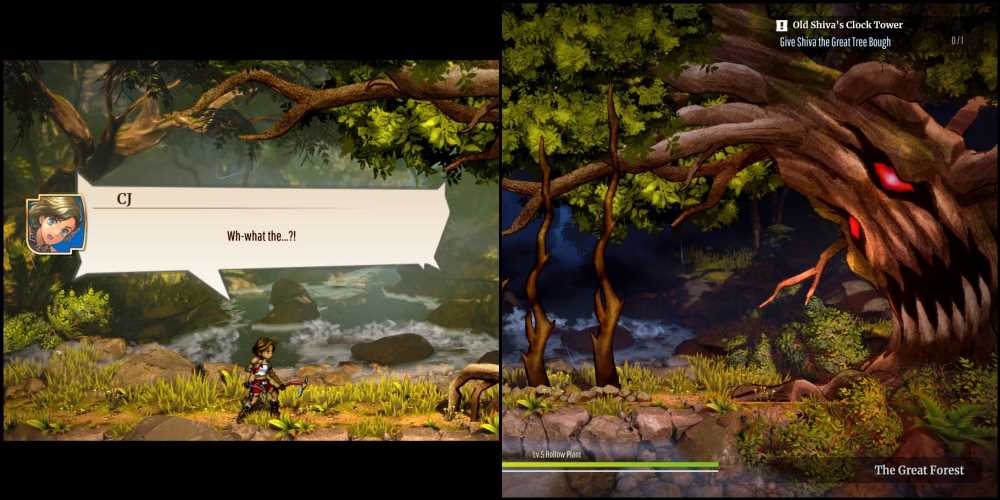 Being your first big battle in the game, you’ll learn all the basics needed for boss fights with it — for instance, how the shield gauge system works in these larger creatures, or how to wait for weak points. Let’s go over all Hollow Plant’s attacks and how to beat this magic tree without much trouble. 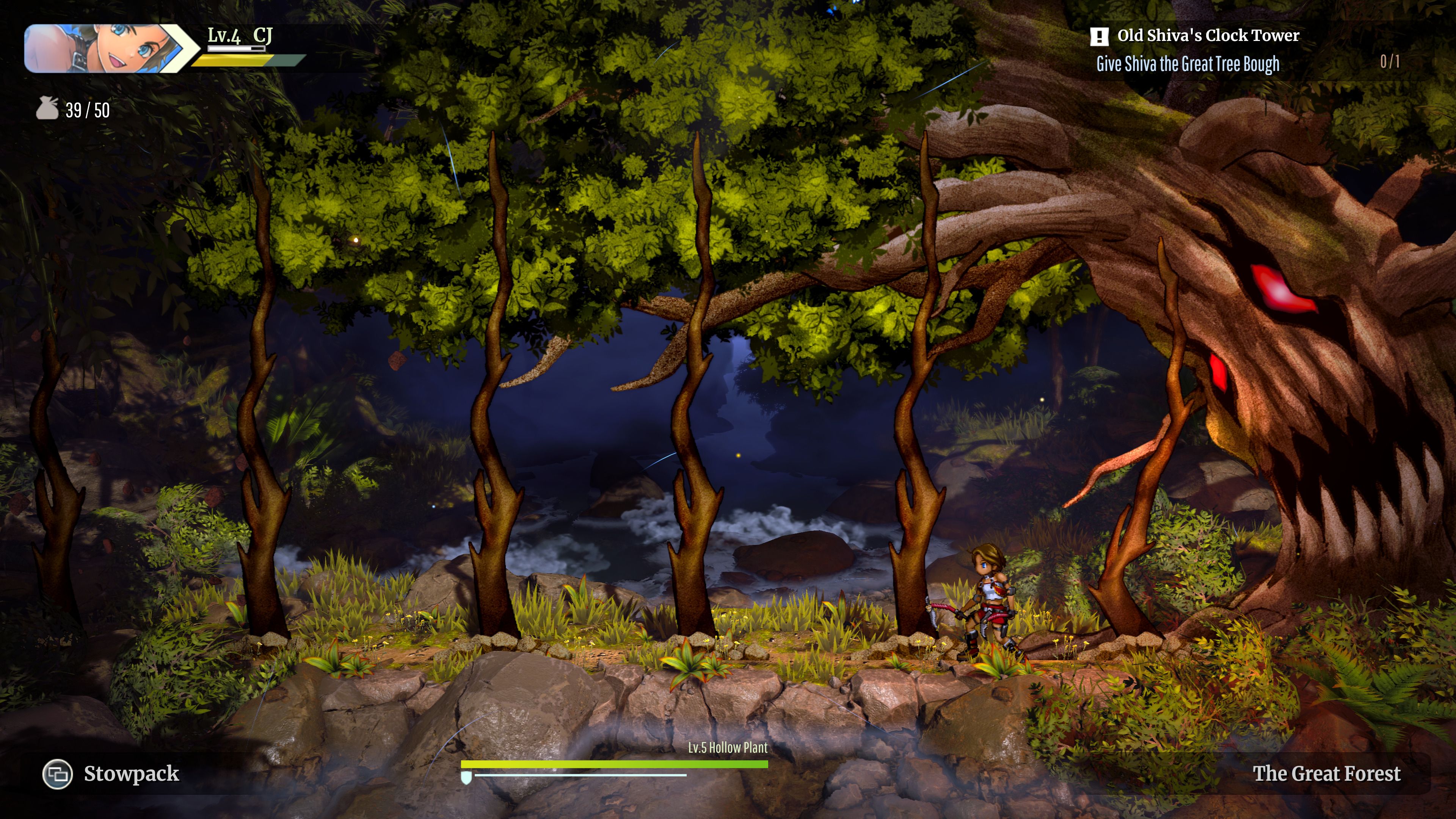 This boss is located in the Great Forest, the first dungeon you unlock while completing your first Main Quest. However, it’s in Main Quest 3 in which you’ll be tasked to beat this tree for the first time. NPC Shiva wants to restore the city’s Clock Tower. To do so, you need to get a Great Tree Bough from the Great Forest.

The only way to get this valuable item is to fight the Hollow Plant. In order to reach it, you only need to get to the forest entrance and advance all the way to the right. You’ll go through the first area and the cave before arriving at your desired location. The enemy will be right before the Signpost Great Tree Glade.

You can use the fast travel in your Signpost to skip areas.

A mysterious character will make his first appearance here. He’ll be relevant later in your adventure.

How To Defeat Hollow Plant 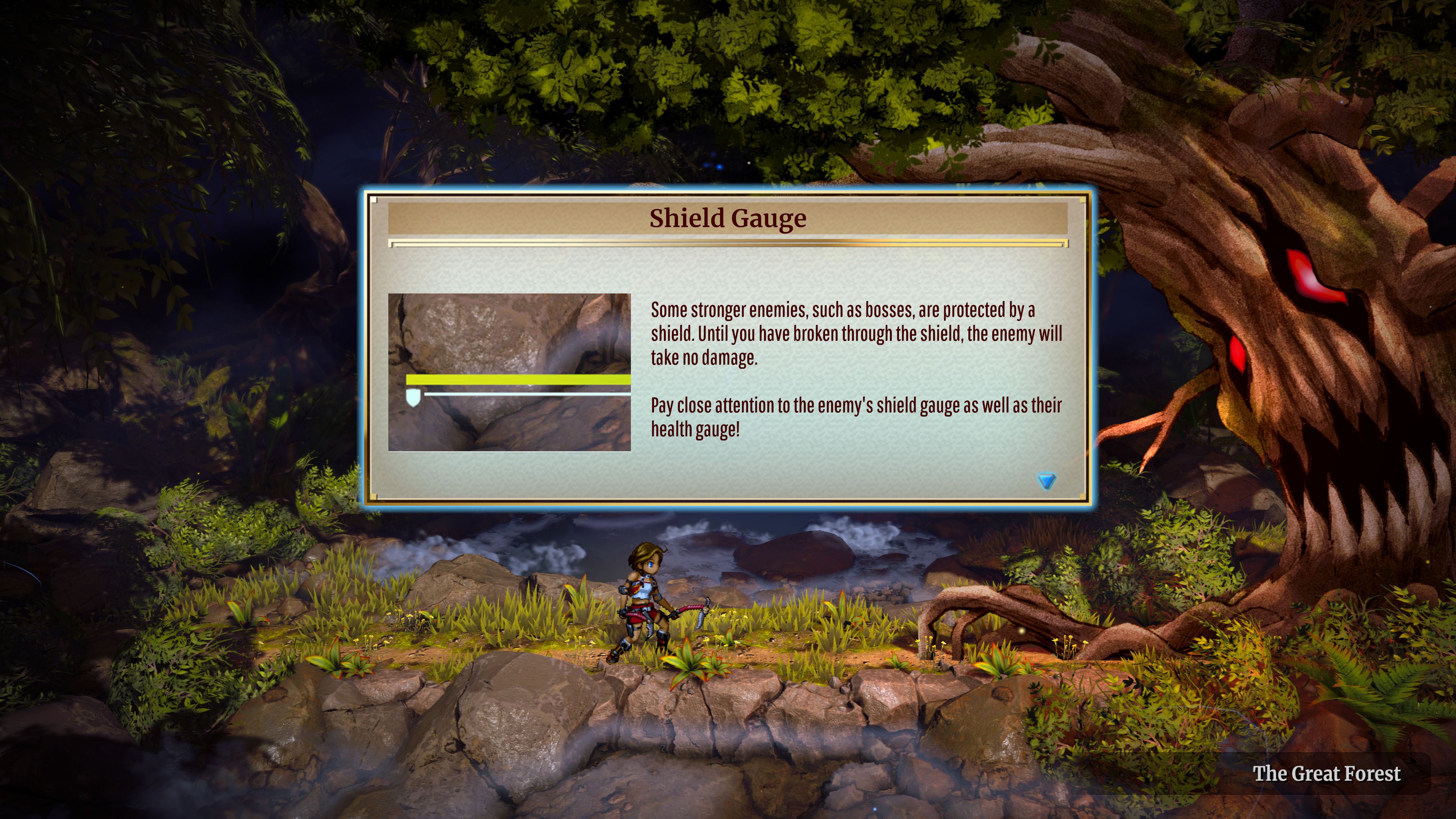 After a brief scene, you’ll be introduced to Hollow Plant. Also, some windows explaining general gameplay mechanics will appear on the screen.

Each boss has a shield gauge below its health bar. Almost every time you attack the boss, you’ll be reducing its shield gauge. Once it’s completely empty, you’re able to deal damage to the actual health bar. However, you can deal direct damage to the latter by attacking the boss's weak point — every boss has one.

Depending on how much damage you deal to the shield, it could be wiser to just wait for the moment the weak point is exposed. During this first fight, you’ll reduce the tree’s health bar much faster this way. 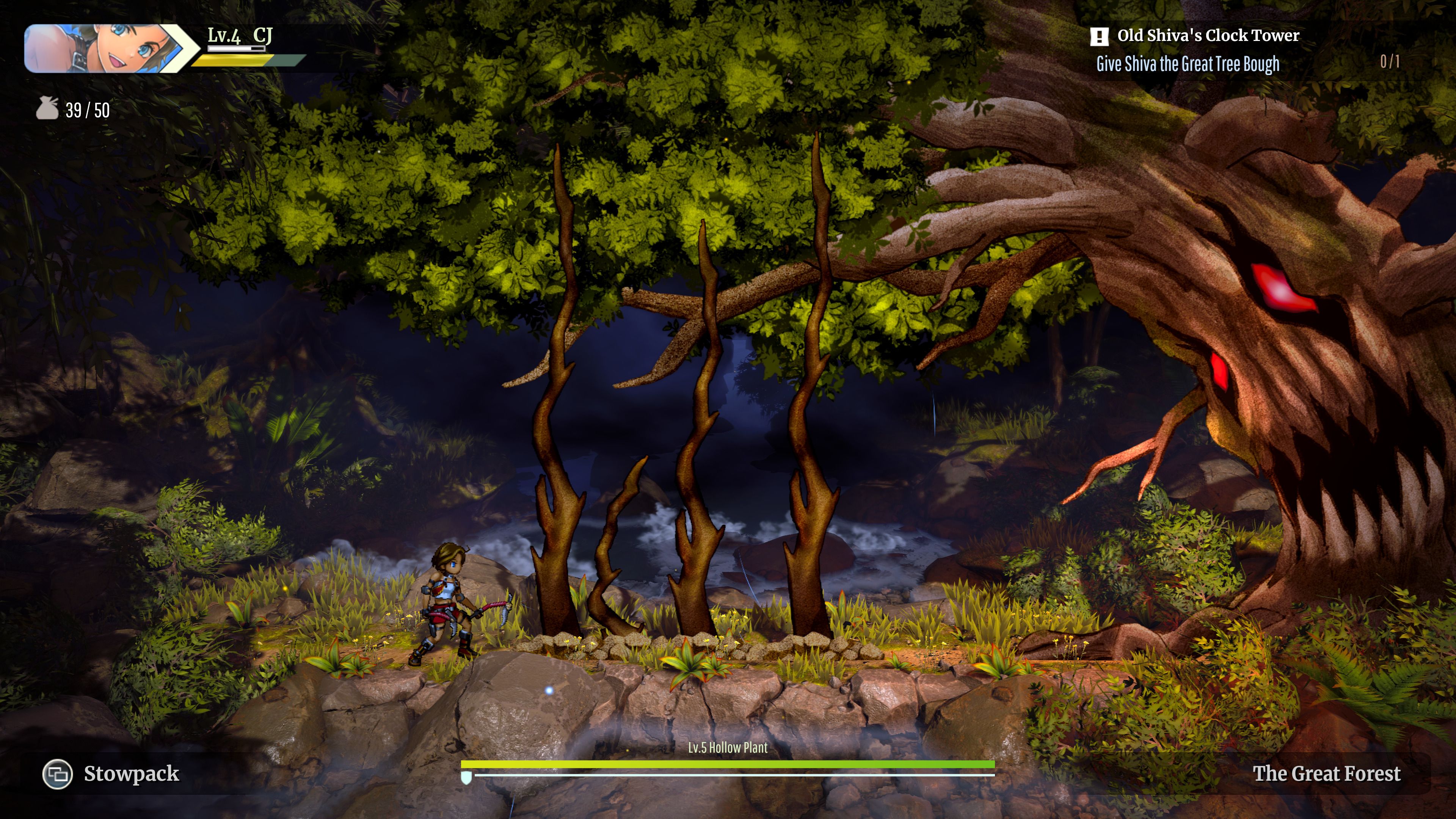 The tree fiend will attack using only two objects: its branches and a worm. The branches are its regular attack, making them rise from the underground. They’ll appear at different distances and numbers, sometimes all together and other times leaving a space in between them.

Check the marks on the floor to know where the branches will go up. Also, don’t touch them after they rise because you’ll get damage anyway. 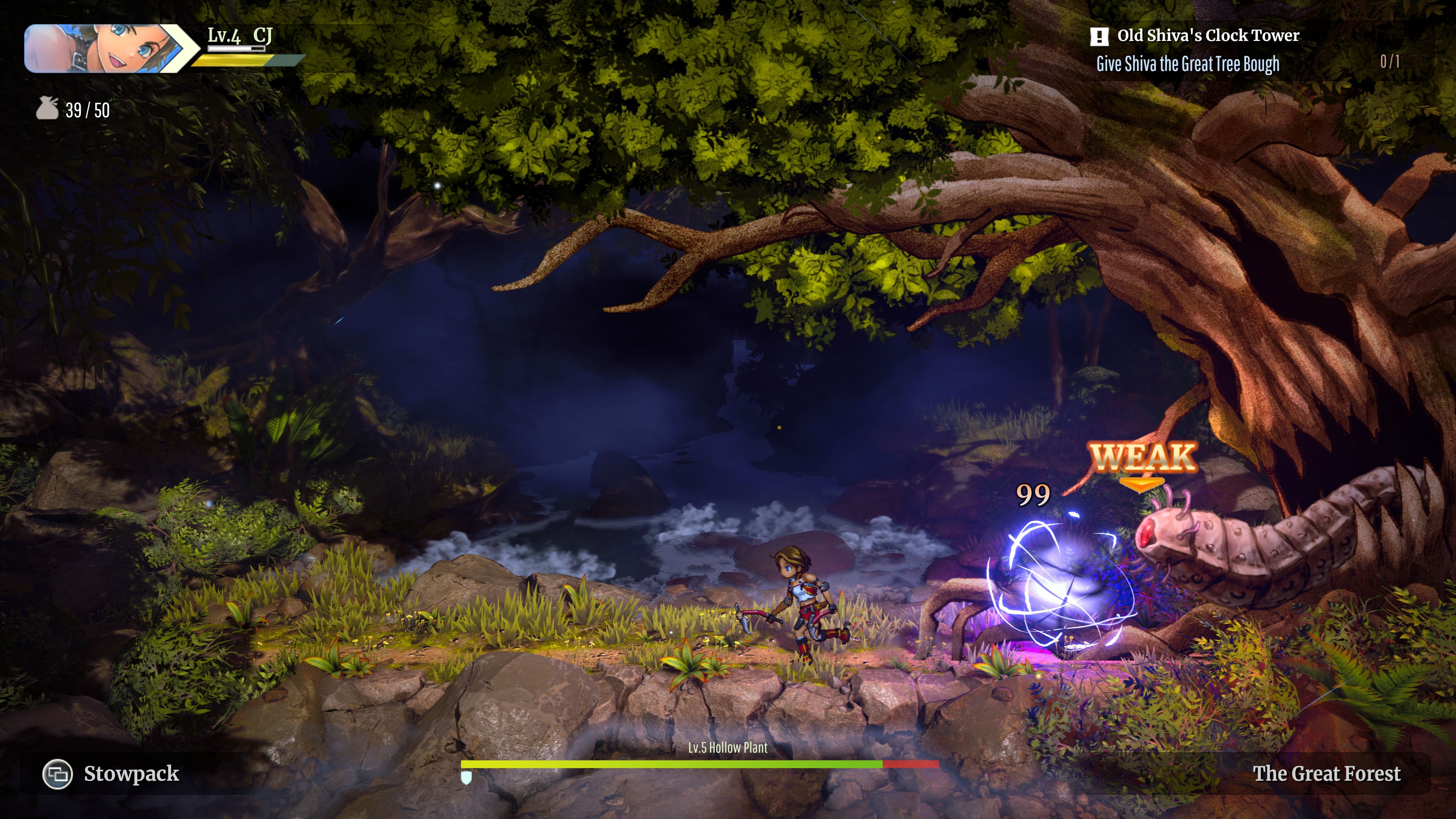 On the other hand, the worm is Hollow Plant’s weak point. After a series of branch attacks, the tree will release this creature from its mouth, exposing its actual core. The worm will only do one action, which is charging a ball for a few seconds and then releasing it in a straight line. What you need to do is hit the creature — it doesn’t matter if you use ground or areal attacks — and avoid the ball.

Try not to get hit by the ball because you’ll be stunned for a moment and lose the opportunity to keep hitting the worm. You can use your Quick Step to avoid the ball — it has invincibility frames. 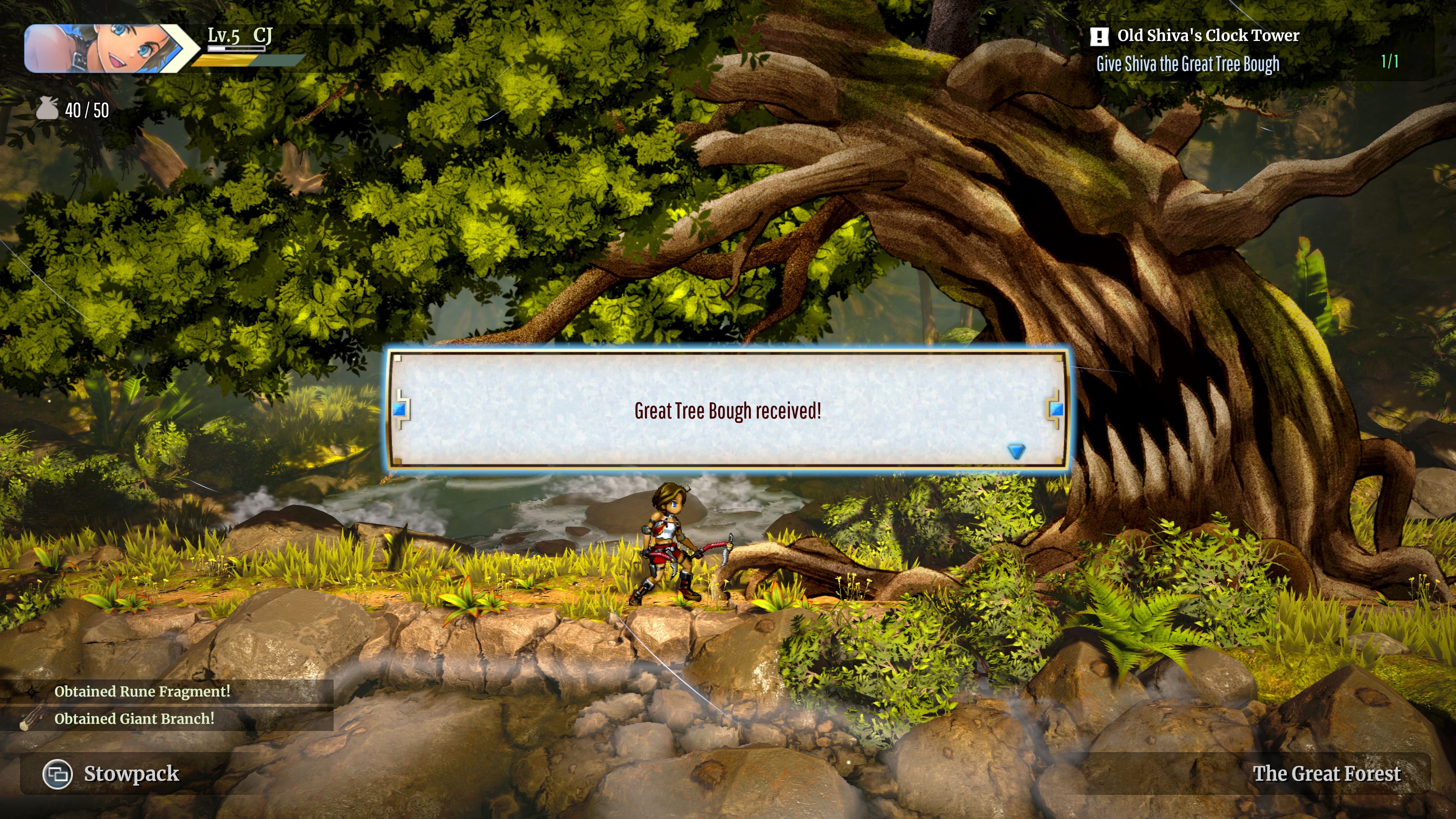 When defeated, Hollow Plant will drop a Giant Branch (resource), the Great Tree Bough that you need to give to Shiva back in the Plaza, and a Rune Fragment. Rune Fragments are a vital part of Eiyuden Chronicle: Rising, but you'll learn about them much later in the game.

How To Farm Giant Branches 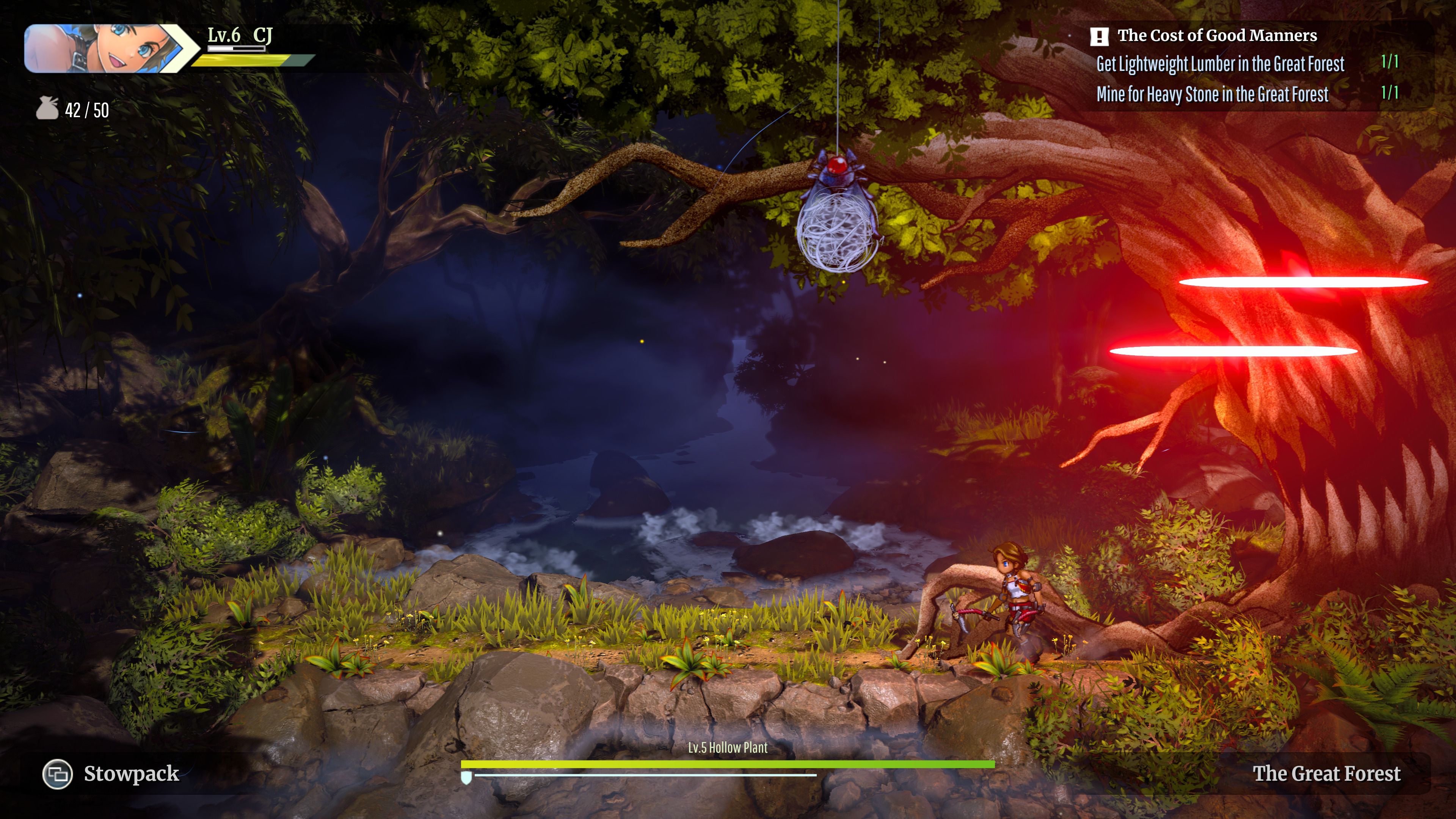 Once you’ve defeated the boss, you’ll be able to fight against it every time you want. You simply need to return to its same spot and it will be ready for another round. This will be useful for different reasons, but the closest one will be to get a Giant Branch, which the boss will always drop when defeated. Some quests will ask you for this resource.

It’s worth mentioning that the second time you meet this boss, it will be a slightly different fight. The Hollow Plant will be accompanied by a spider, which will throw telegraphed balls of spiderweb from time to time. You can’t actually hit this insect, so just focus on the tree and its worm. The rest of the battle will be exactly the same. 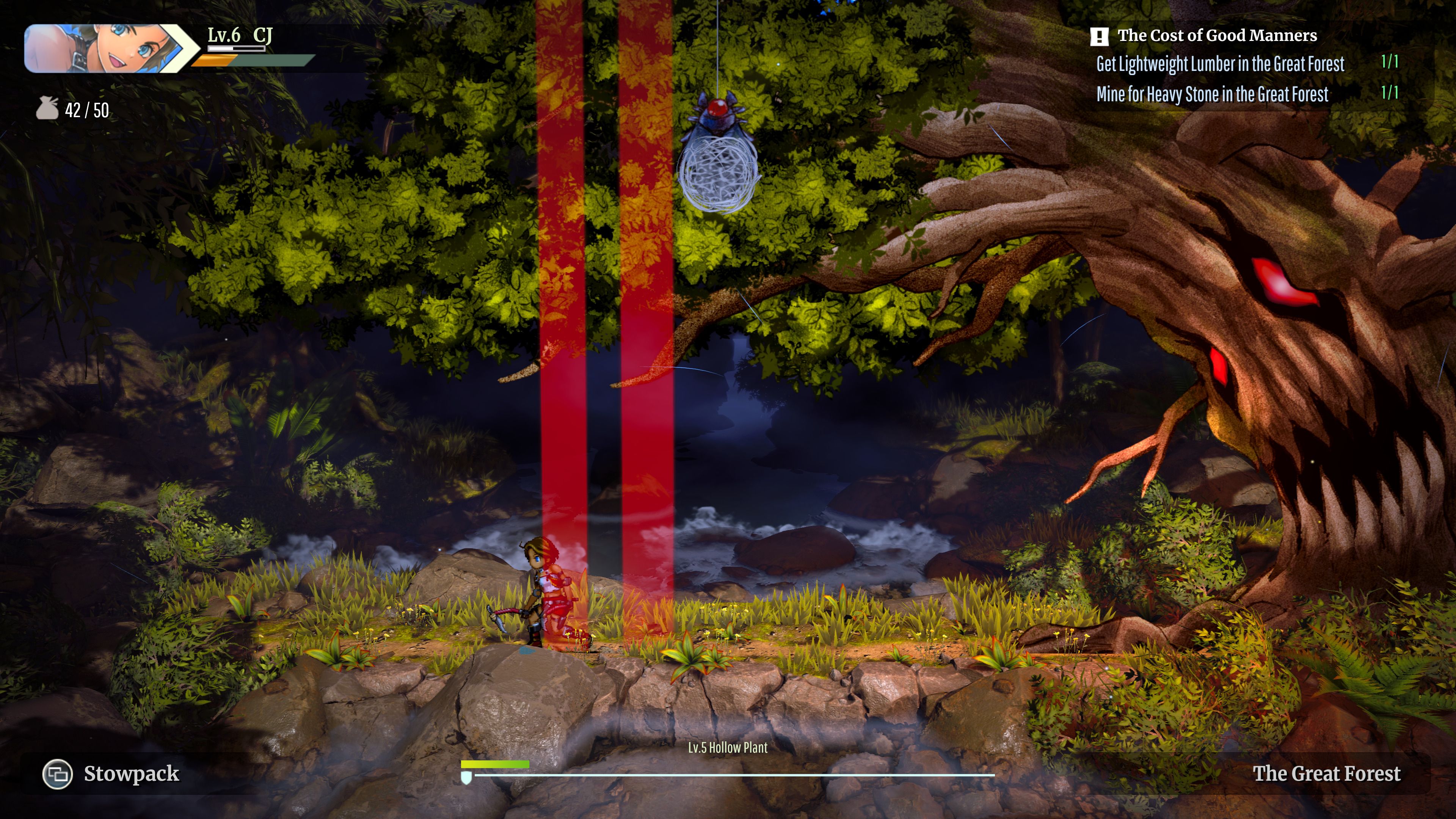 To farm multiple Giant Branches, you’ll have to repeat the Hollow Plant boss fight as many times as needed. Fortunately, the tree will keep its initial level (for some time at least) and the zone can be quickly reached by using fast travel.

You’ll also need to beat Hollow Plant once more in order to get an Agricultural Seed for Ayus, the farmer, during the Main Quest 11. This time, the boss will be level 15, but with the exact same moves as always.