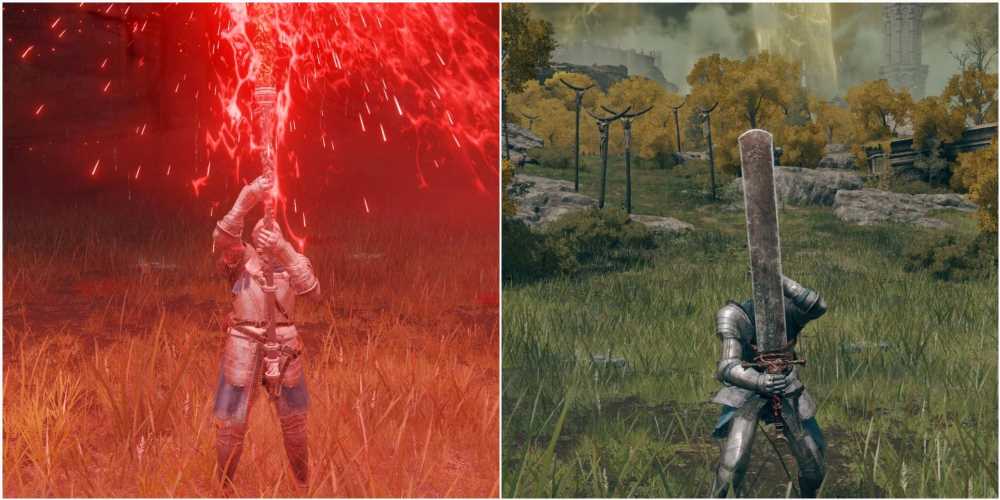 Elden Ring follows in the footsteps of the prior entries to the Souls series of games with the inclusion of a luck stat, this time called Arcane. This stat governs your item discovery, which increases the drop rate of items from enemies, as well as the rate at which Bleed takes to activate. That is to say, bleeding an enemy will do the same damage, but will occur faster with a higher Arcane stat.

The past games in the Souls series usually had only one weapon that would scale with Luck, making it hard to justify investing in the stat. But Elden Ring changes things for the better, not only making Arcane viable but potentially the best stat in the game when combined with the effectiveness of Bleed. Here are the best Arcane weapons, and some of the best weapons overall, in Elden Ring.

Have you ever wanted to hold hands while fighting in a Souls game? Well, with the Clinging Bone you can do just that, though the fact that the hands you hold are skeleton arms, it would probably hurt to try and use them as weapons in real life. Either way, these Fist weapons, which can be dual-wielded to put them on both hands, have a slight Arcane scaling to them.

They scale with Dexterity as well, making for a good weapon for you if you use both stats. They also feature the weapon skill Lifesteal, which functions as it did in past games, grabbing the enemy and stealing some health. The Clinging Bone is dropped by Ensha in the Roundtable Hold after an invasion encounter with him.

The Ripple Blade is wielded by the Albinauric enemies that roam the Liurnia region. Despite its name, it actually belongs to the Axe category of weapons. It is one of the few weapons in Elden Ring that scales exclusively with Arcane. That scaling is very high as well, with max level on the Ripple Blade taking the Arcane scaling to an S rank.

The weapon skill on the Ripple Blade, Wild Strikes, is very good at stun-locking human-sized enemies and can reliably defeat them with low effort. The Ripple Blade can be purchased from Pidia the Carian Servant at Caria Manor, who can be found after defeating the boss of the area.

Daggers in Souls games often suffer due to their lacking ability to interrupt the attacks of opponents. But the Ruduvia remedies this if you consider its weapon skill, Reduvia Blood Blade, which fires off a blood projectile at enemies. This, and the regular bleed inflicted by the dagger, make for very high damage.

And to further sweeten the deal, the Reduvia has a B scaling with Arcane when maxed out, which means that it will do significant damage to enemies despite being so small. The Reduvia can be obtained by killing Bloody Finger Nerijus, an NPC invader found in Limgrave.

If you have fought the dreaded Bell Bearing Hunter then you have experienced the big brother to the Regalia of Eochaid. It has a very similar weapon skill to the attacks those mini bosses use, where you use telekinesis to launch your sword in a corkscrew attack at enemies.

The weapon is another one that scales with both Dexterity and Arcane, meaning you will have to level both to max the efficiency of it. The sword can be found at the end of the Gaol Cave dungeon, or by making a very dangerous jump from the cliffs above the item.

The Twinblades are a weapon class returning from Dark Souls 3 — or at least, an official class for the paired weapons available in that game. Eleonora's Poleblade is a Twinblade that really looks like someone stuck two katanas together onto a big stick. This is another weapon that does bleed damage by default.

It also scales with Arcane, though it scales more with Dexterity. But this potential downside is lessened when you consider that bleed is strengthened with more Arcane. This Twinblade is dropped by Eleonora, Violet Bloody Finger at the Second Church of Marika after she invades you.

Morgott's Cursed Sword is a remembrance weapon, which is Elden Ring's version of boss weapons. That fact alone makes for this Curved Greatsword to be a perfect choice for anyone who wants to impersonate Morgott — and you can also purchase his outfit from the Finger Reader in the Roundtable hold.

The Cursed Sword is another Dexterity weapon that has some Arcane scaling, but with additional Arcane can become seriously powerful due to the benefit of its Bleed effect. Whether for cosplay or regular use, Morgott's Cursed Sword is a fine choice of weapon, and its rainbow color is far from the strangest weapons Elden Ring has to offer.

Yet another weapon that scales with both Dexterity and Arcane, the Bloody Helice might be the best option if you are looking for an effective Bleed weapon. The weapon skill allows you to dodge back, before attacking with a poke and, when combined with the Bleed effect, can be very effective.

The Helice belongs to a new weapon class in Elden Ring called the Heavy Thrusting Swords. One benefit of them is that you can block with a shield while attacking with this weapon. The Bloody Helice can be found in the Writheblood Ruins on the Atlus Plateau.

The Marais Executioner's Sword is a perfect weapon for a Strength user that wants to invest a little in Arcane, but is an excellent weapon for Arcane build as well due to the high damage and really effective weapon skill. This weapon is the big brother of the Regalia of Eochaid, and as such shares the telekinesis.

Marais Executioner's Sword is actually the same weapon that the Bell Bearing Hunters wield against you, and it is especially gratifying to use their own attacks against them. It can be found at The Shaded Castle and is dropped by the boss of the area.

The Great Spear class of weapons is useful for people who want a high range on their weapon, but do not want to compromise on damage. Mohgwyn's Sacred Spear fulfills that role excellently, especially with its sick weapon art that can easily kill high-level enemies extremely quickly.

This weapon clearly shows that bleed is one of Elden Ring's most powerful status effects and that is made even more obvious by the effect's prominence in PVP. Mohgwyn's Sacred Spear is another weapon that is acquired by trading the corresponding bosses Remembrance to the Finger Reader in the Roundtable Hold.

Katanas are one of the more popular weapon classes in Elden Ring, and Rivers of Blood is potentially the top item on that list, next to Moonveil. This is another weapon that does not have amazing scaling with Arcane, it scales mostly with Dexterity, but a high Arcane stat makes the weapon so much more powerful.

Following in the footsteps of prior weapons that scale with Arcane, Rivers of Blood does bleed damage and has one of the best weapon skills in the game, which can make enemies bleed in three to fours hits. The high number of people who have chosen this weapon in PVP makes it obvious just how effective this thing is. If you want it for yourself, you will have to kill Bloody Finger Okina in the Mountaintops of the Giants area in the Northernmost part of the map.