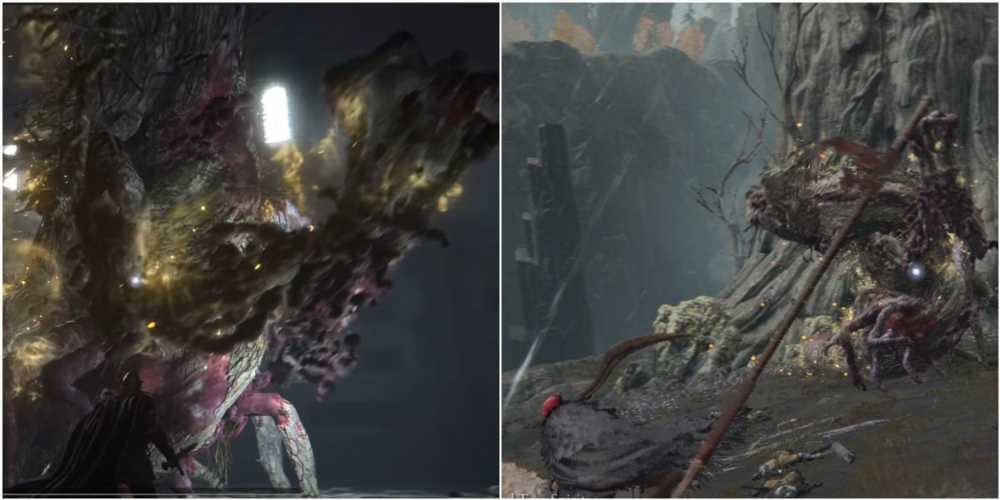 FromSoftware embodies what it is like to battle a relentless, endlessly wriggling worm whose bent on killing you. Their sheer aggressiveness and speed in combat make it doubtlessly challenging to keep up with them, much less defeat them. As such, a fully detailed rundown of these parasitic worms is to permanently exterminate them. 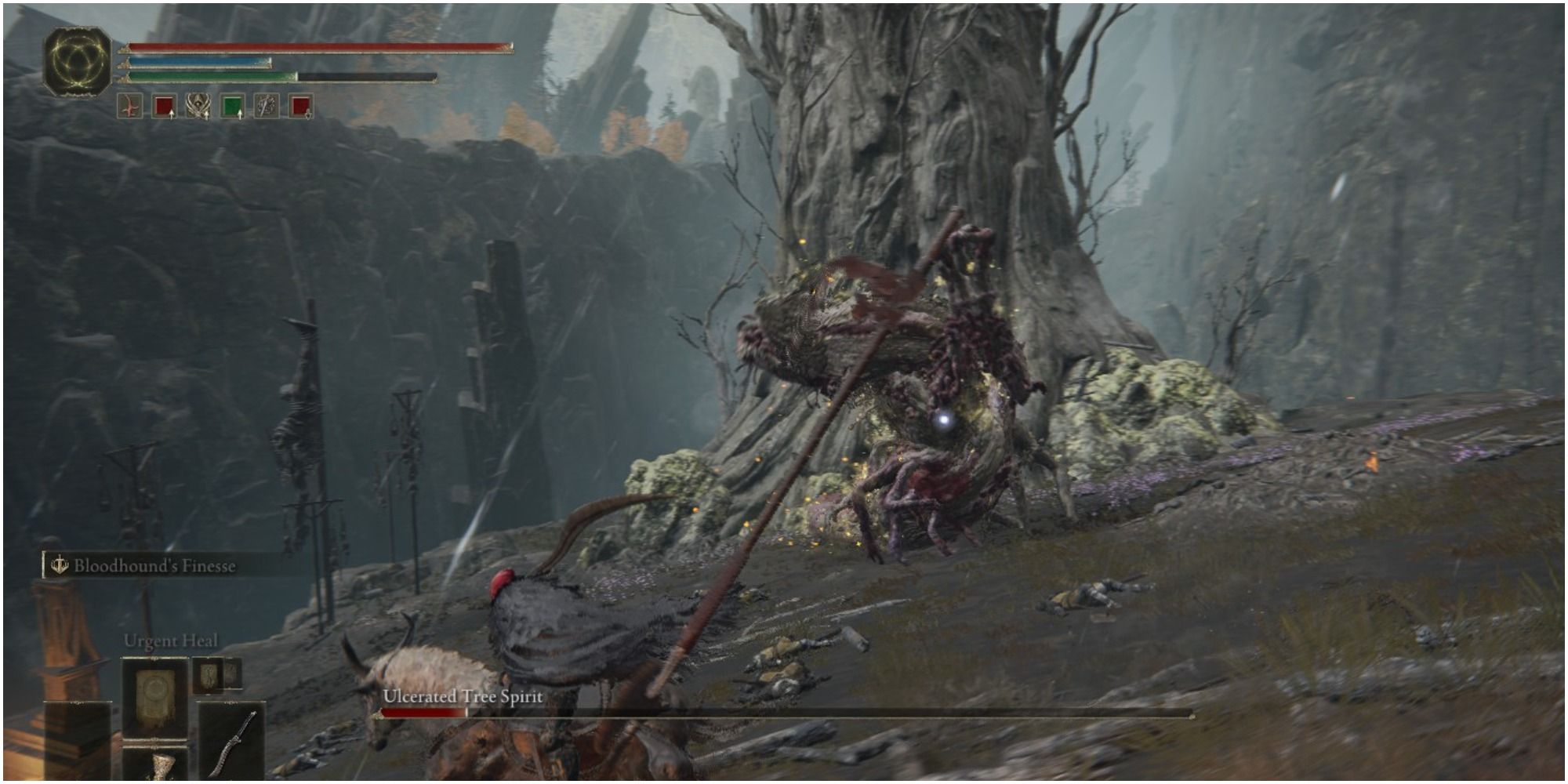 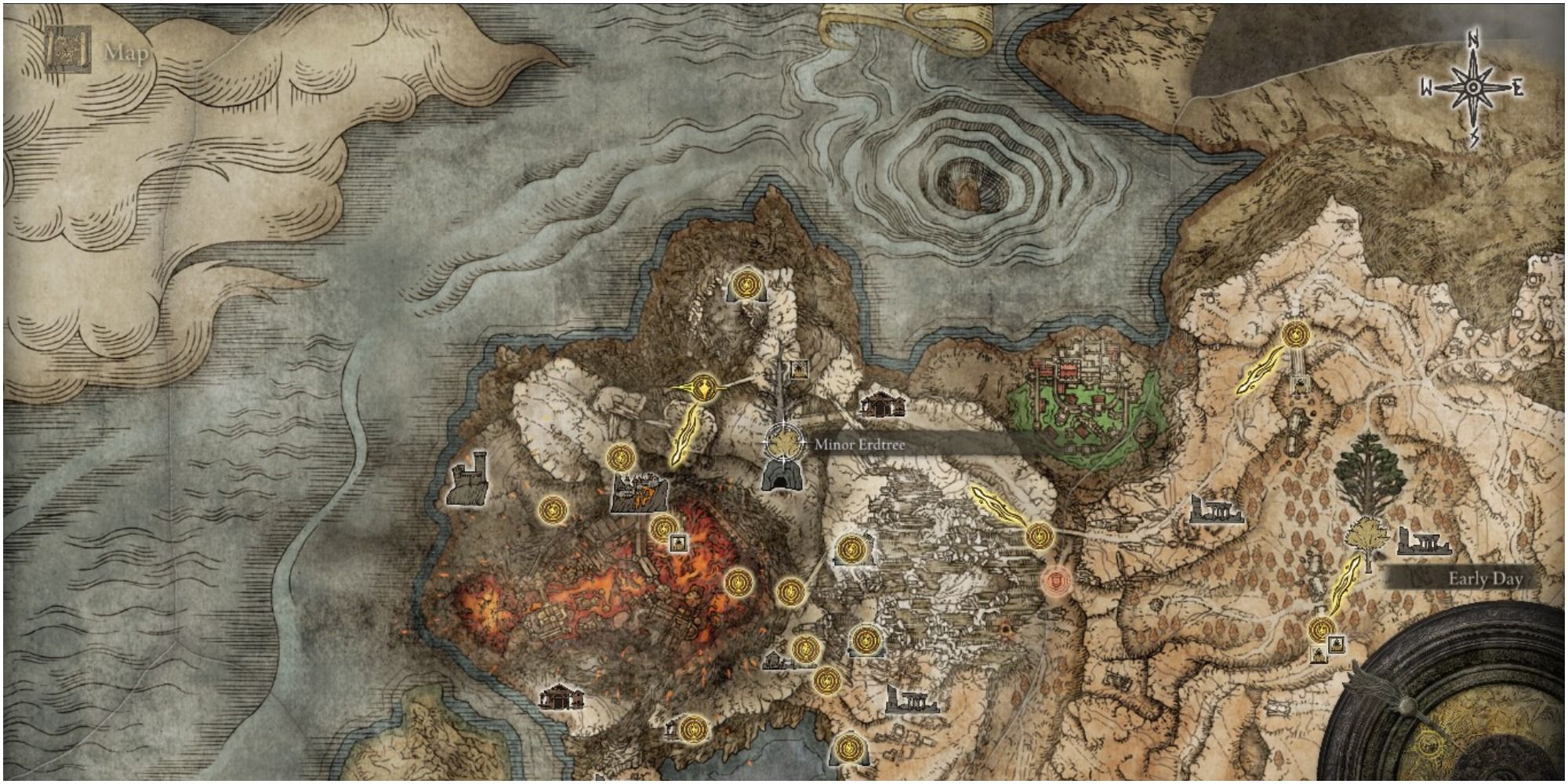 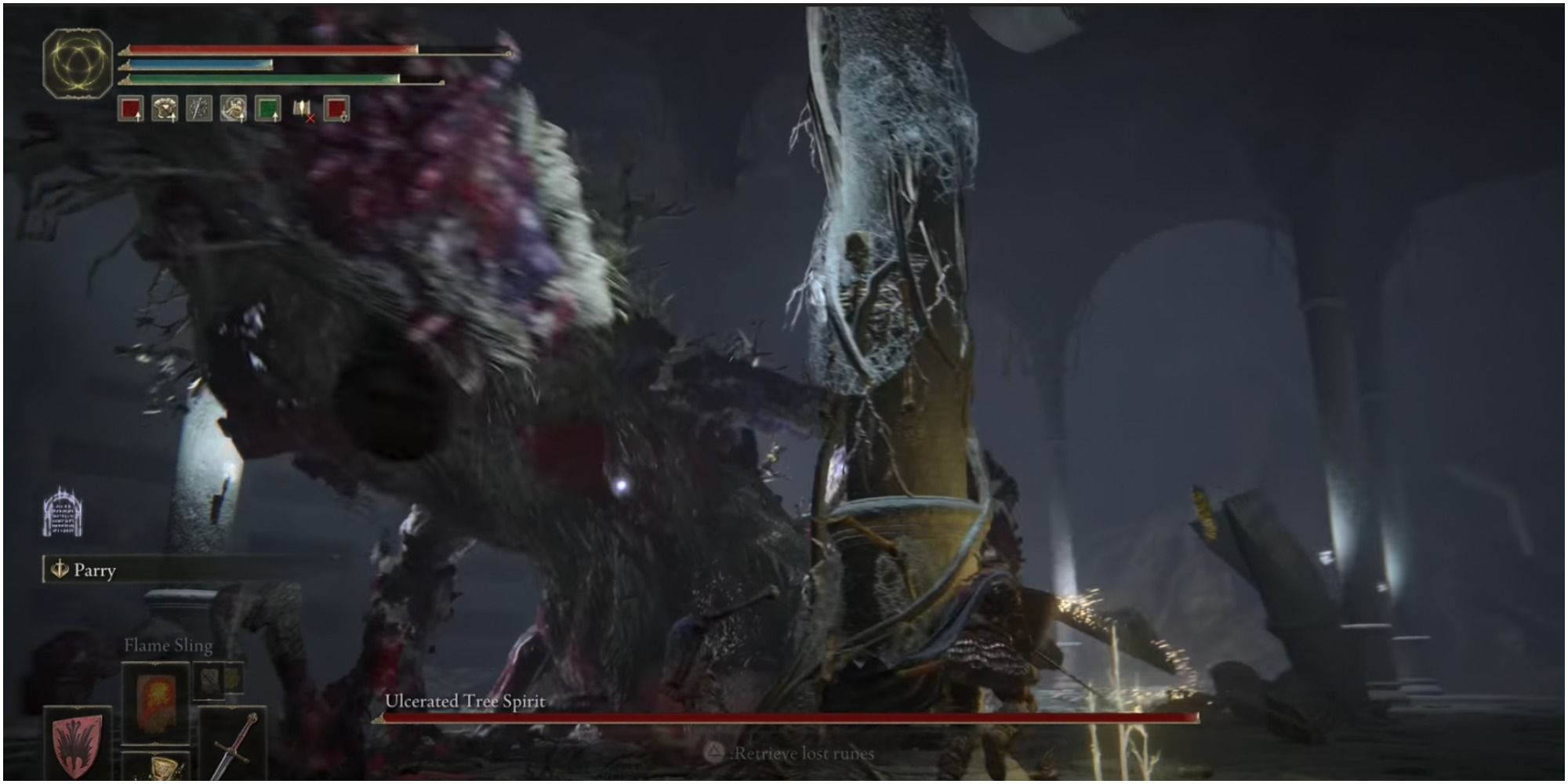 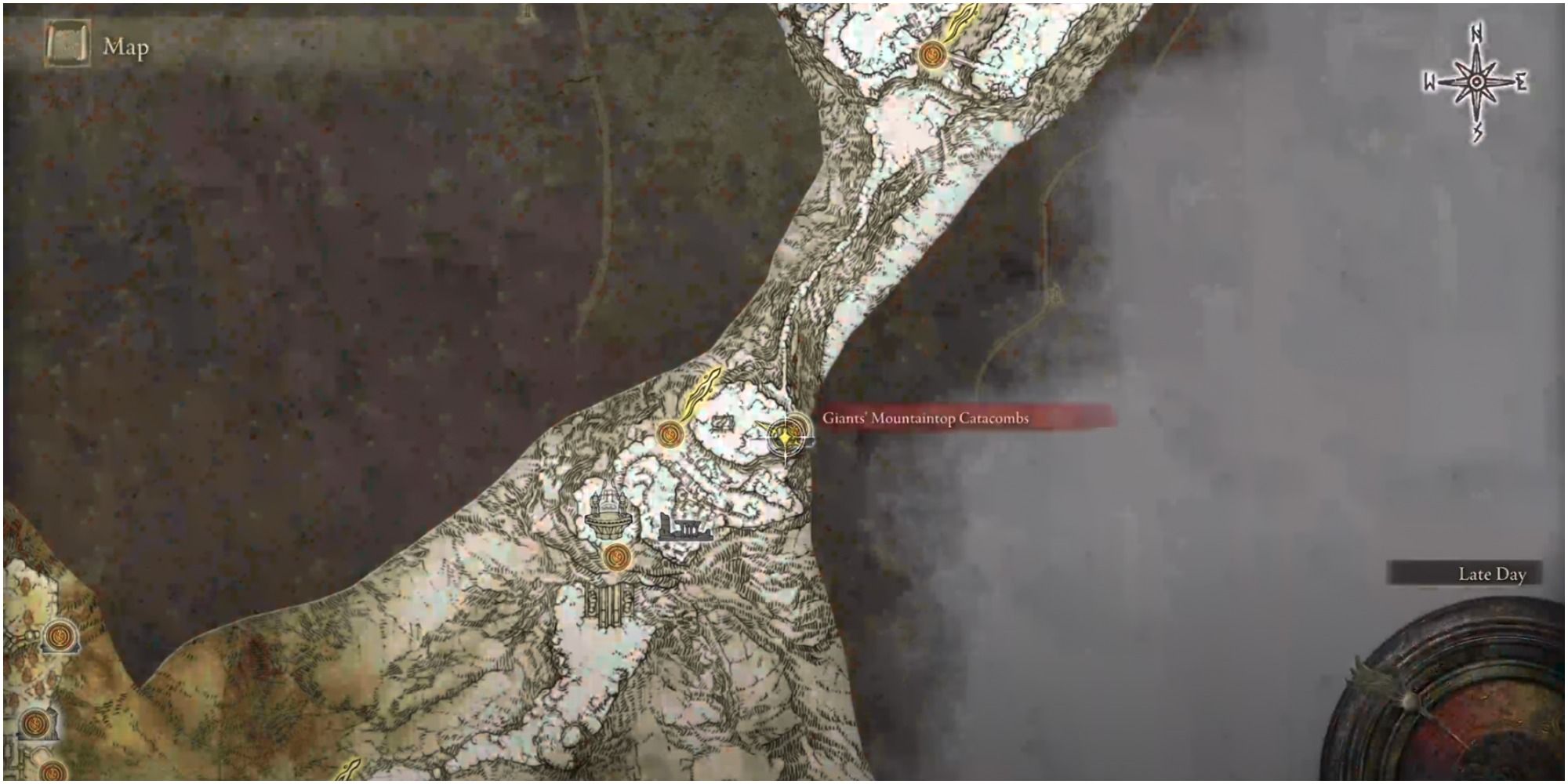 Aside from the ones you'll find in Fringefolk Hero's Grave and War-Dead Catacombs in Limgrave and Caelid respectively, Ulcerated Tree Spirit bosses can also be found at Mount Gelmir and the Mountaintops of the Giants. For the former, you'll find the boss at the base of a Minor Erdtree near the Road of Iniquity Site of Grace, while the latter is close to Giant-Conquering Hero's Grave.

With similar move sets, the game has allowed you to call for as much help as you need when it comes to these bosses. It is best to summon tanky Spirit Ashes such as Lhutel the Headless or Kaiden Mercenary to deal with the walloping these Ulcerated Tree Spirits inflict. With the Mount Gelmir boss, you can do combat on horseback, which makes it easier to evade during devastating AoE attacks. But the Ulcerated Tree Spirit in the catacombs puts you in a bit of a tough spot since you're not given an open space to manoeuvre, though that doesn't mean it isn't doable. 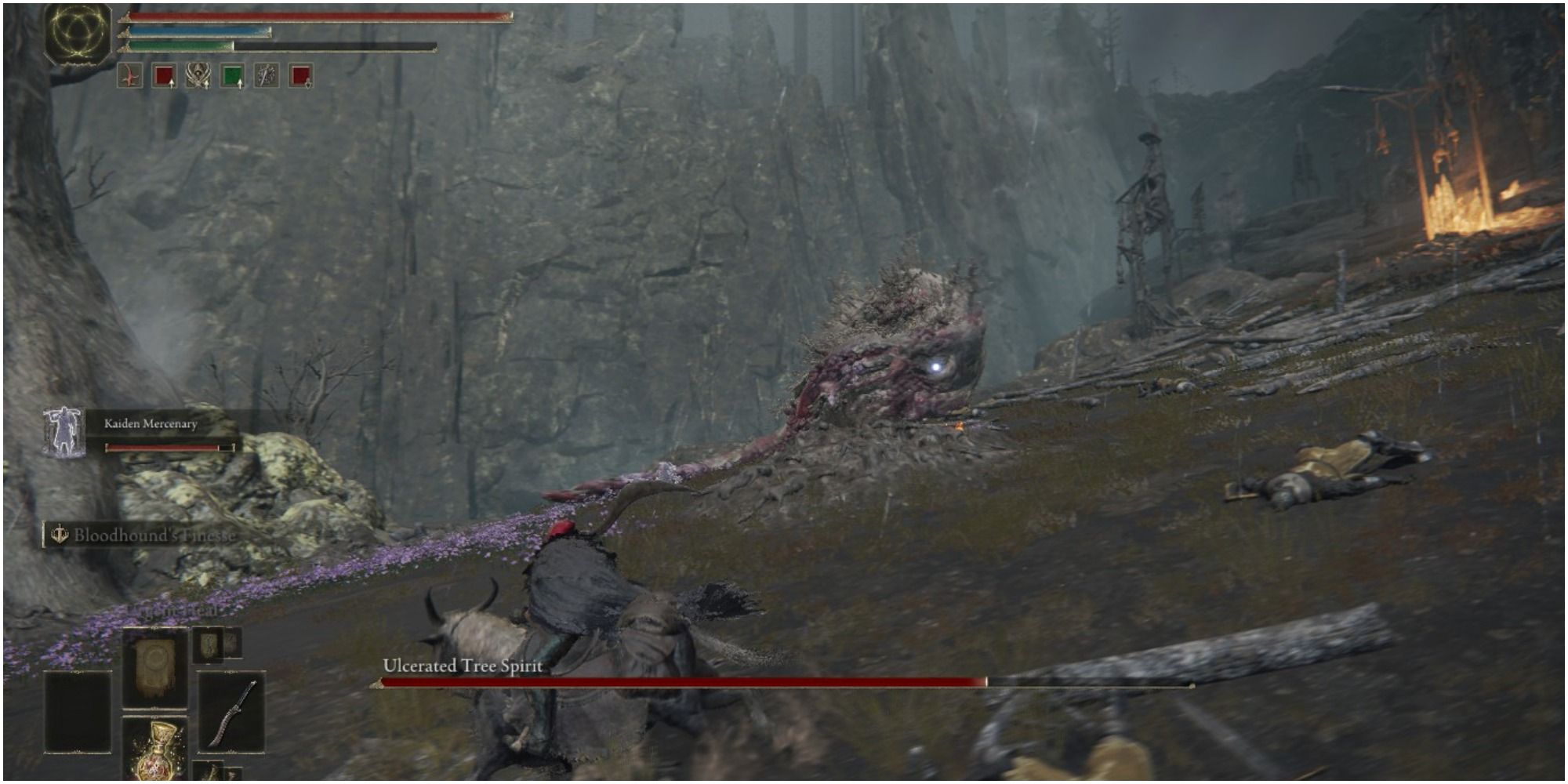 For a wriggling worm, the Ulcerated Tree Spirit has a vast panoply of attacks that it wields. Most of the time, this boss launches itself at you and flip-flops about the boss arena with devastating effect. It is a challenge of mobility on your part when it also inflicts a detonator attack that can one-shot you. So to be as prepared as possible here is a full outline of the Ulcerated Tree Spirit's attacks. 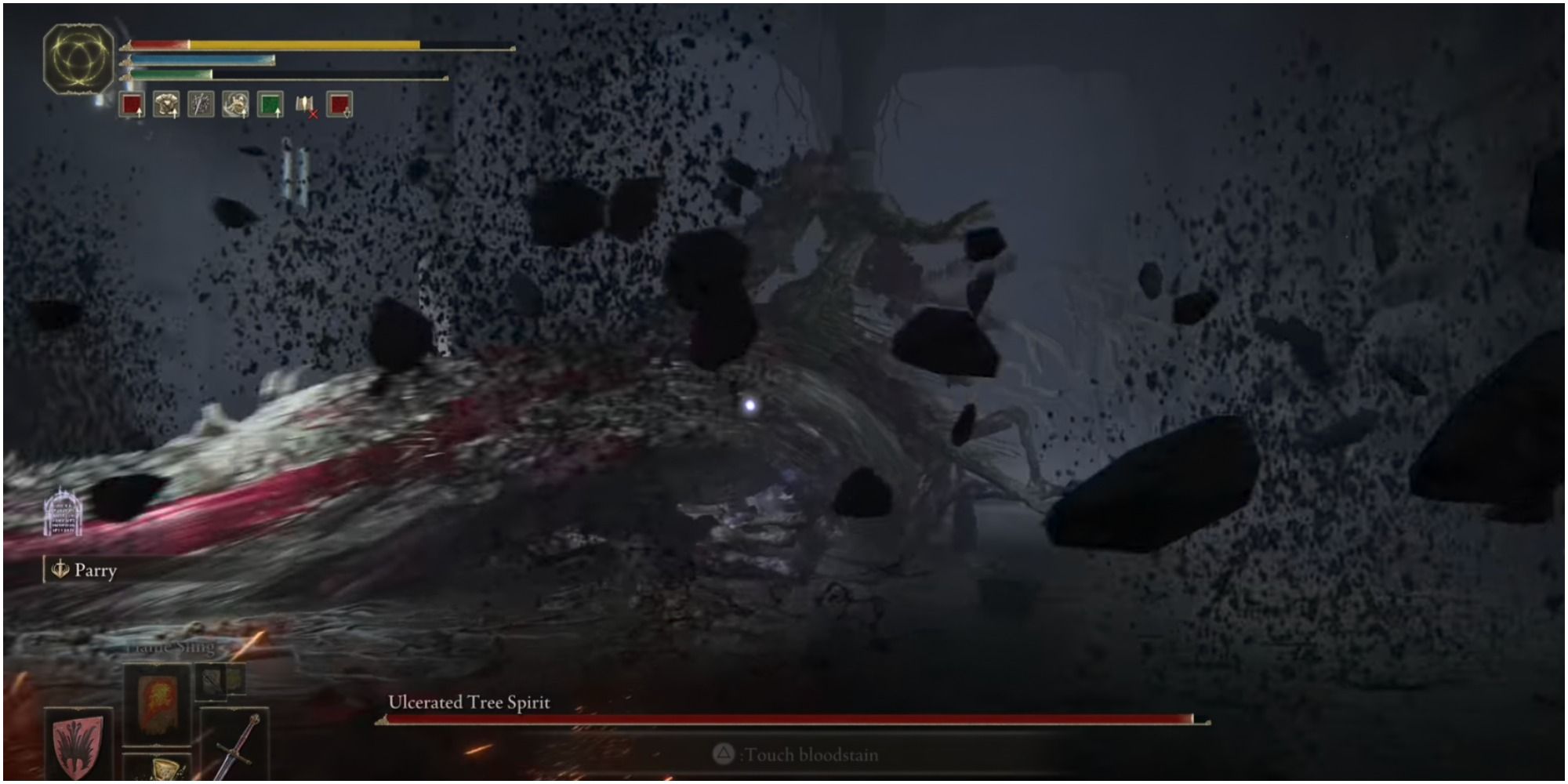 The boss will use its long tail to do a full sweep of the room.

Counter: This attack has an extremely wide range, so back away and do a roll the moment you see its tail coming around. 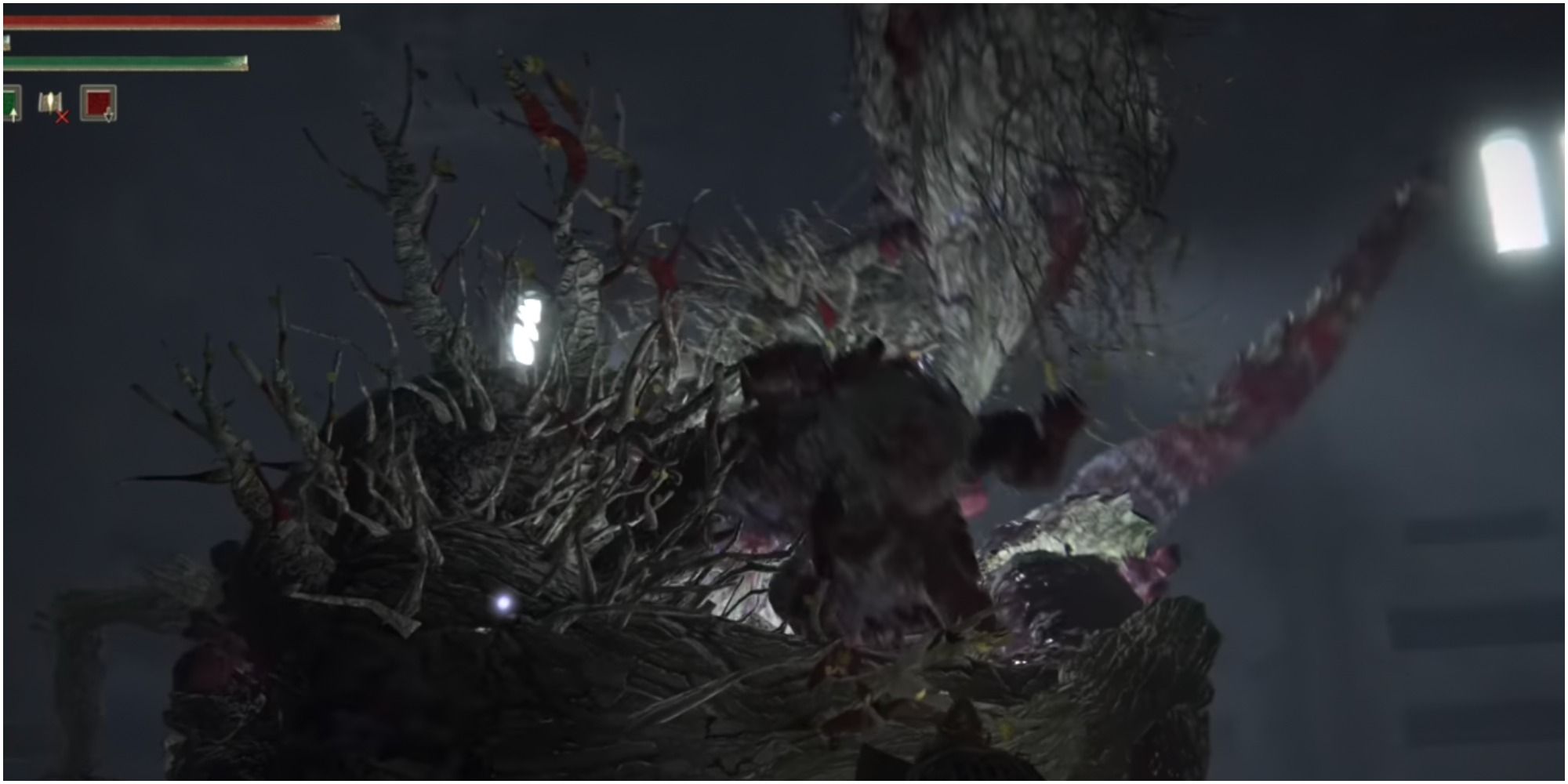 In this case, the boss will raise its tail, then swerve and do a full 360 while releasing its tail.

Counter: As soon as it performs its twirl, press the dodge button once. 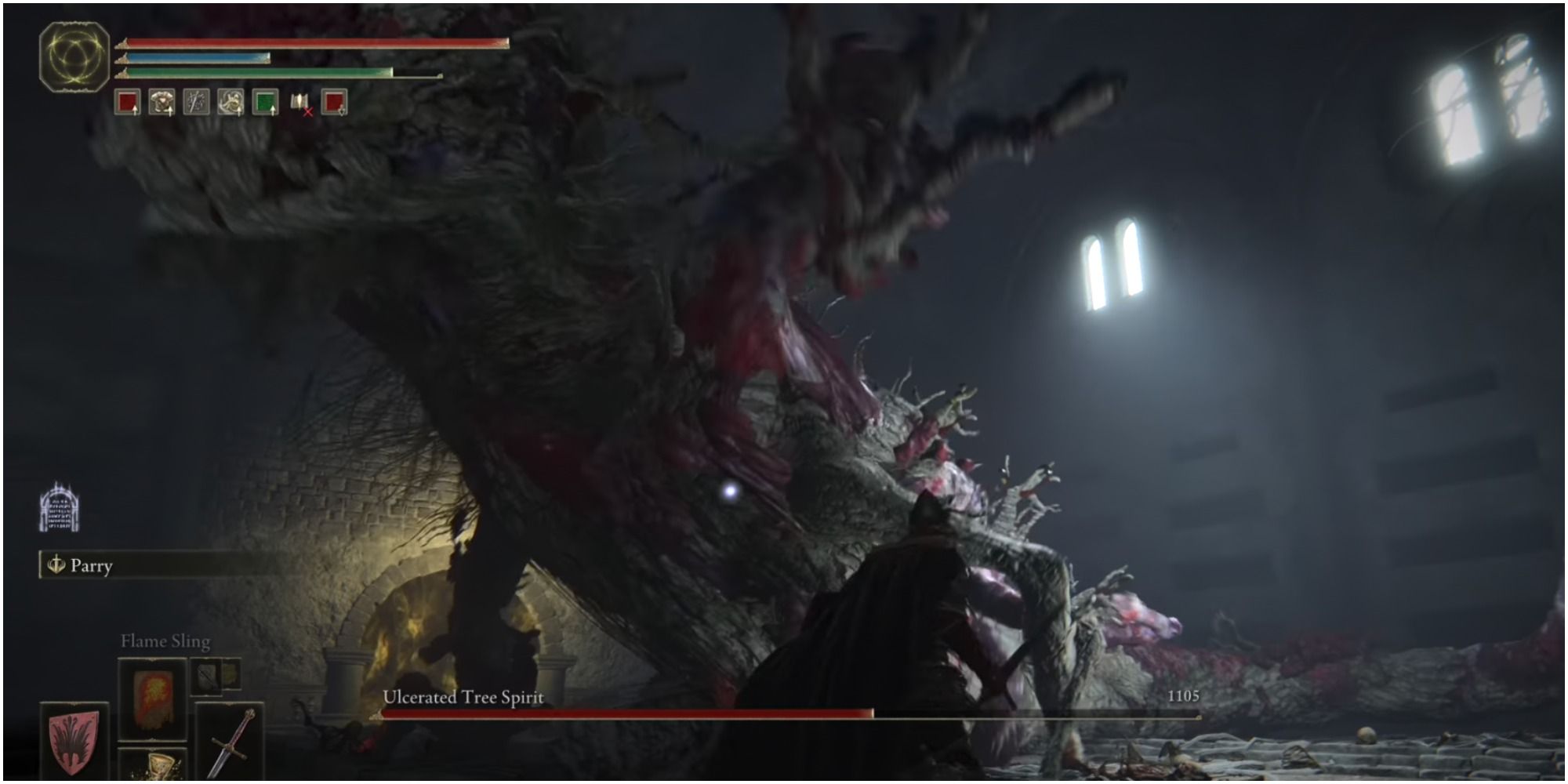 The Ulcerated Tree Spirit will raise its hand before slamming it down twice.

Counter: As soon as you see it raise its hand, and move back as far away as possible. 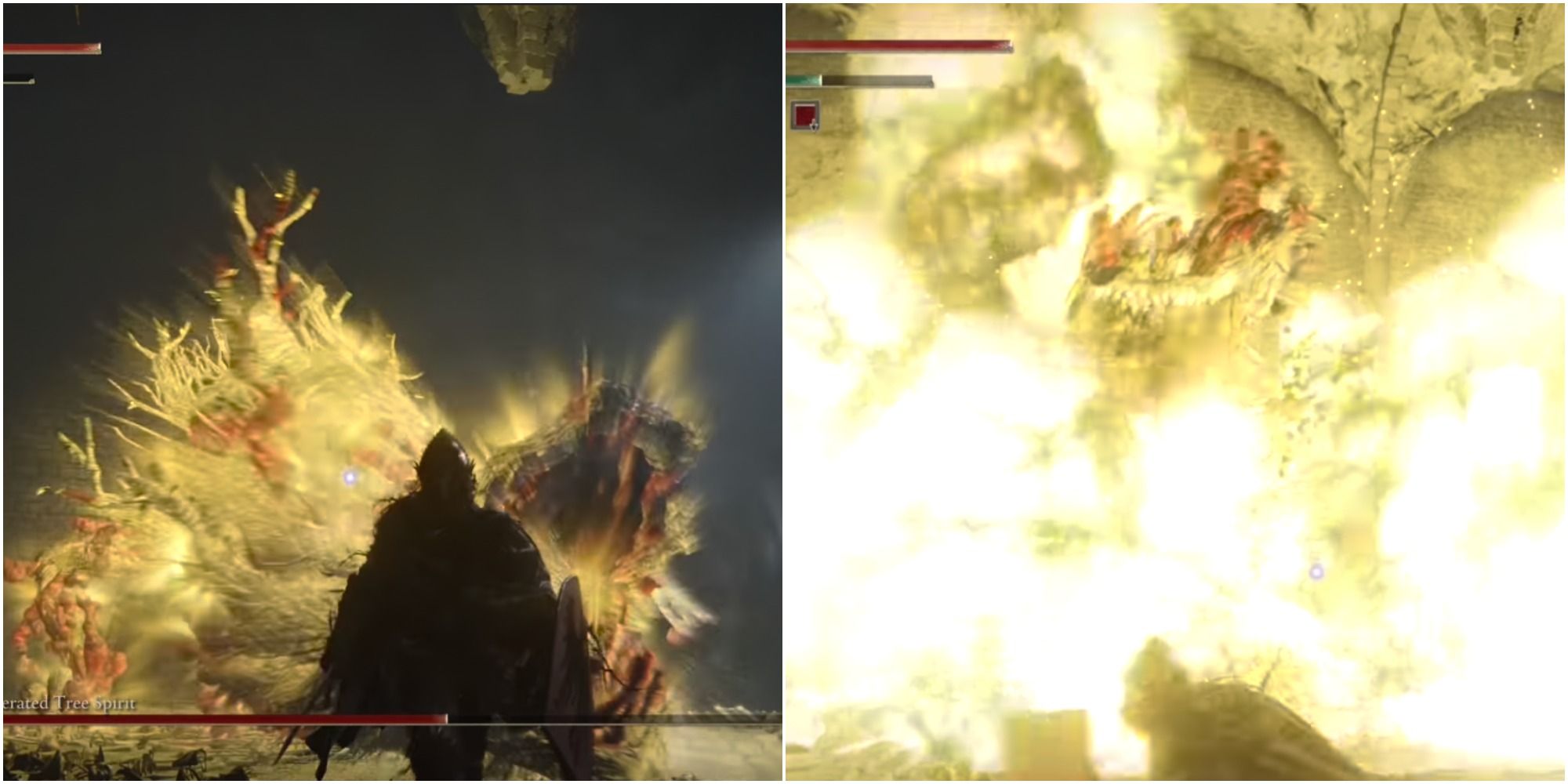 The Ulcerated Tree Spirit's body will begin to glow and tremble, before releasing a devastating explosion of yellow fire. The attack combo continues with a few spires of fire bursting upward.

Counter: The moment you see the boss start to glow and shake, immediately run to the other end of the boss arena. 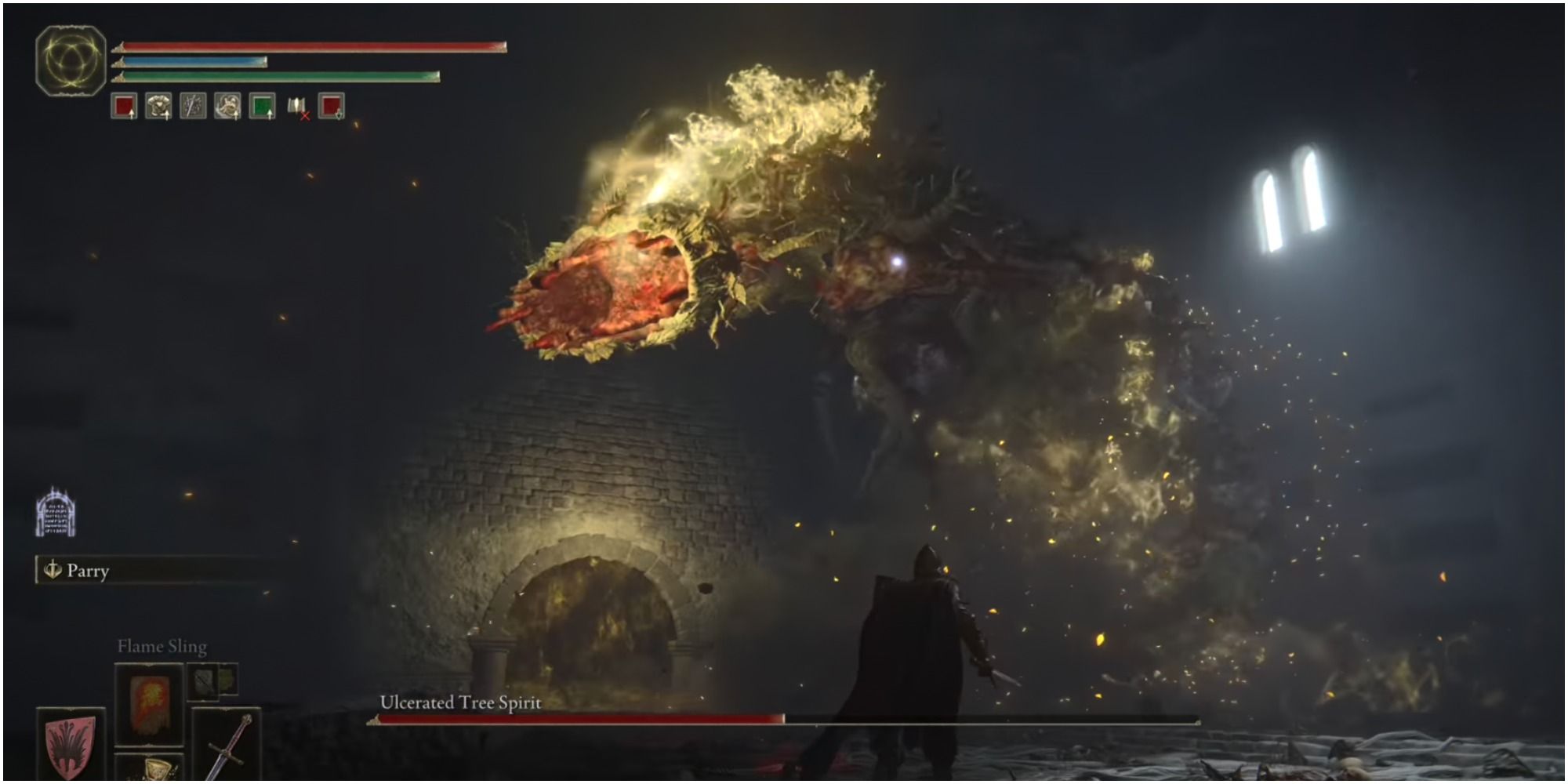 Like a worm, this boss launches itself across the room to squish you into bits, landing on the ground in a heap of dust.

Counter: Roll to the side the moment it zips across the room, and roll again to the side when it leaps and launches straight at you. 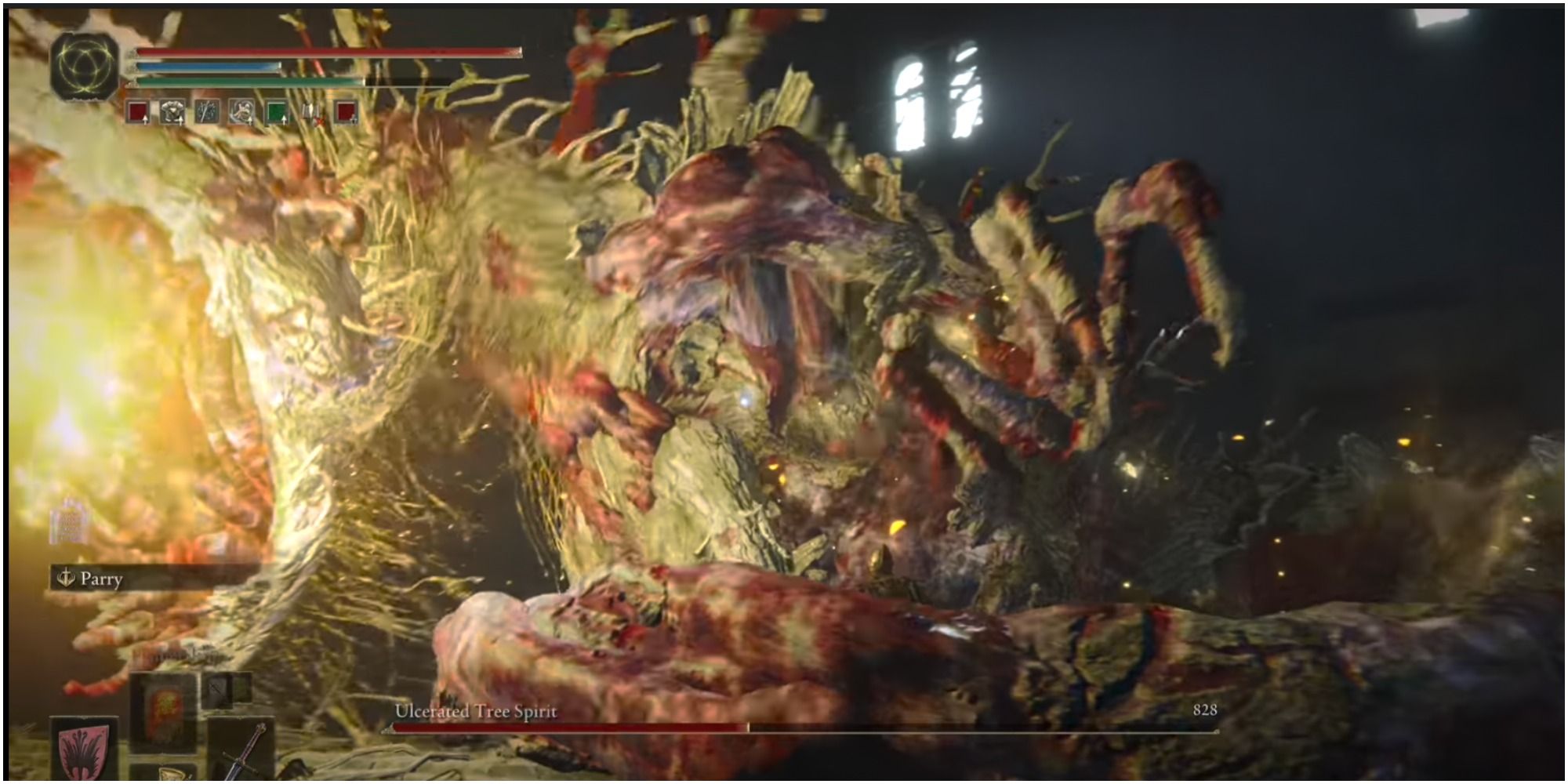 The Ulcerated Tree Spirit starts to glow, but not as brightly as the detonator attack. Instead, it opens its mouth and starts breathing out streams of bright, yellow flames.

Counter: Roll to the side to avoid the flames or get behind the boss and start attacking. 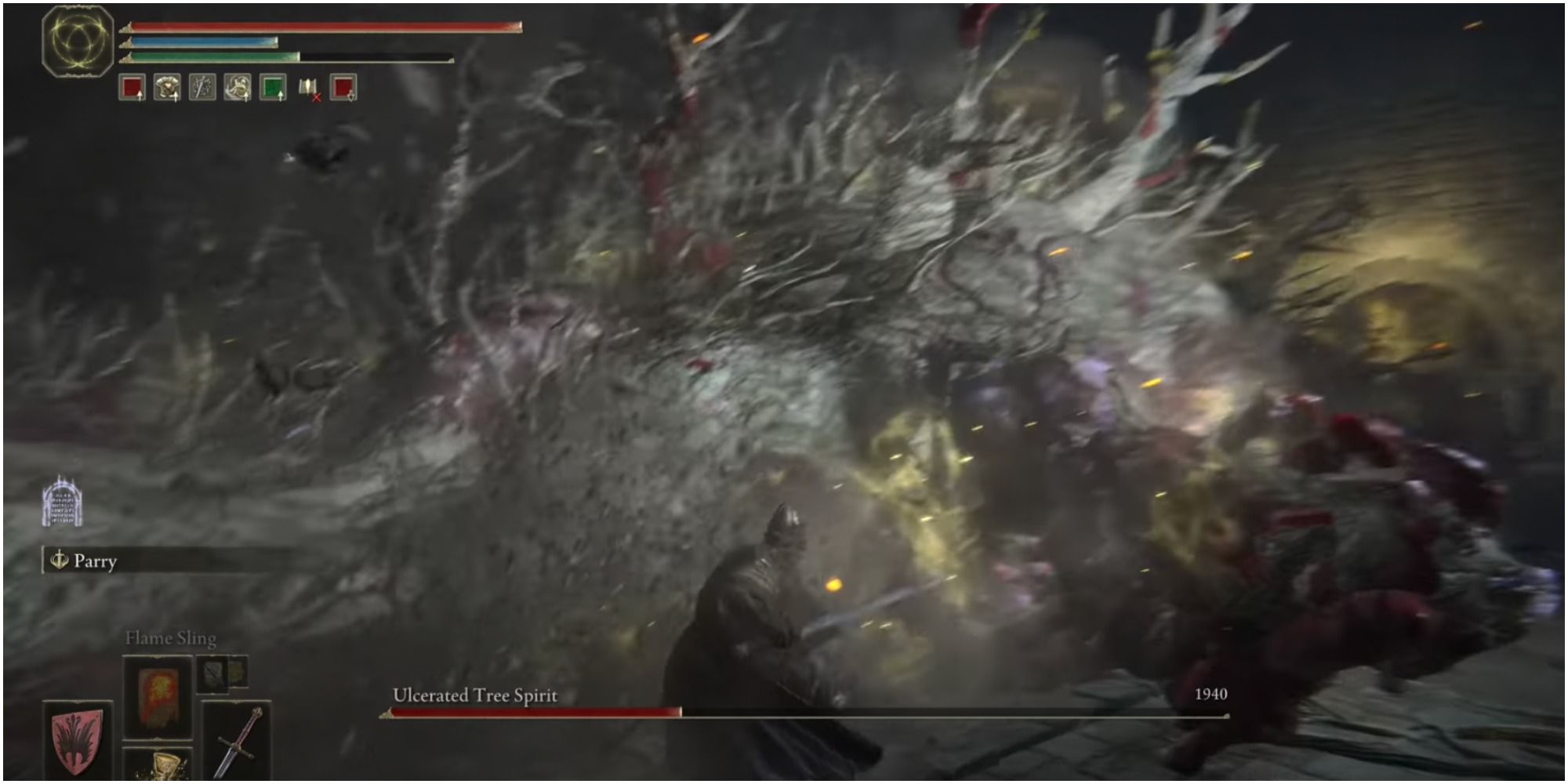 For this attack, the boss will rear back its head slightly and then slam it back down.

Counter: The moment you see it about to slam its head back down, simply dodge in the opposite direction. 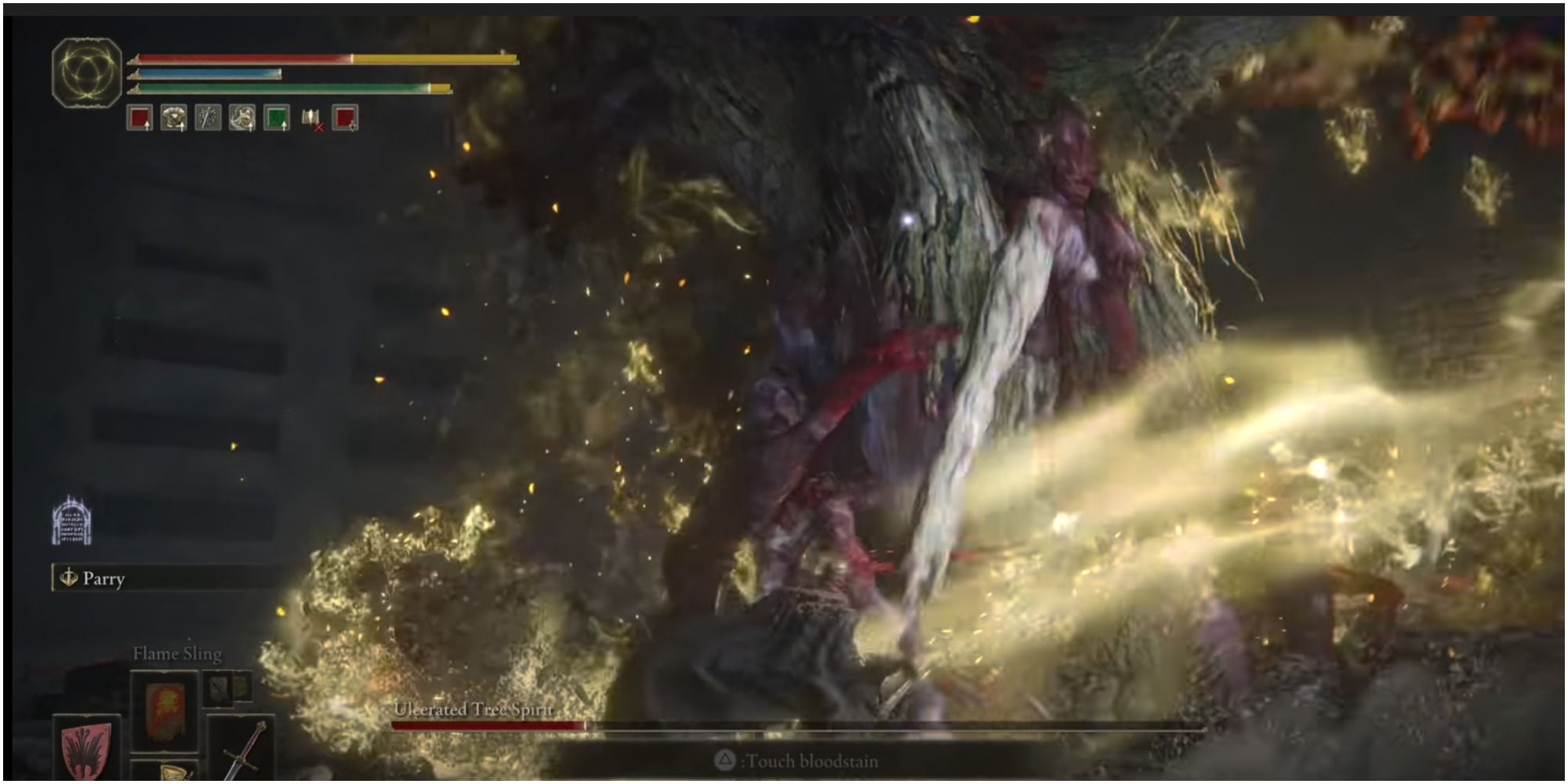 The boss will reach over to its right hand with its other hand and sweep it to the side, leaving a trail of flames in its wake.

Counter: Roll back as soon as you see it reach over to its right hand. 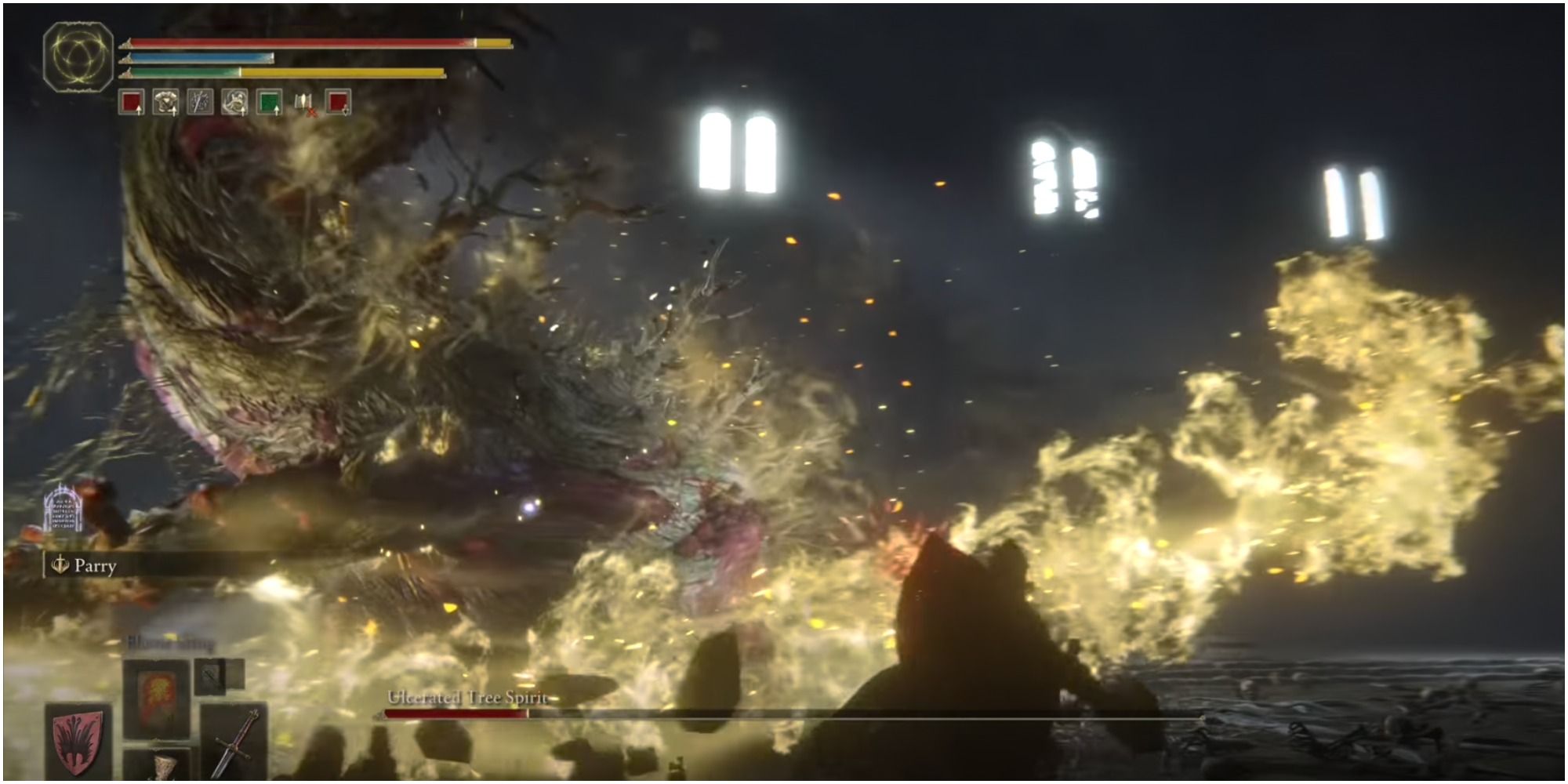 Unlike the previous attack, the boss will use its flaming hand to swipe at you without reaching over to its other hand.

Counter: Use a shield or roll away from its hand. 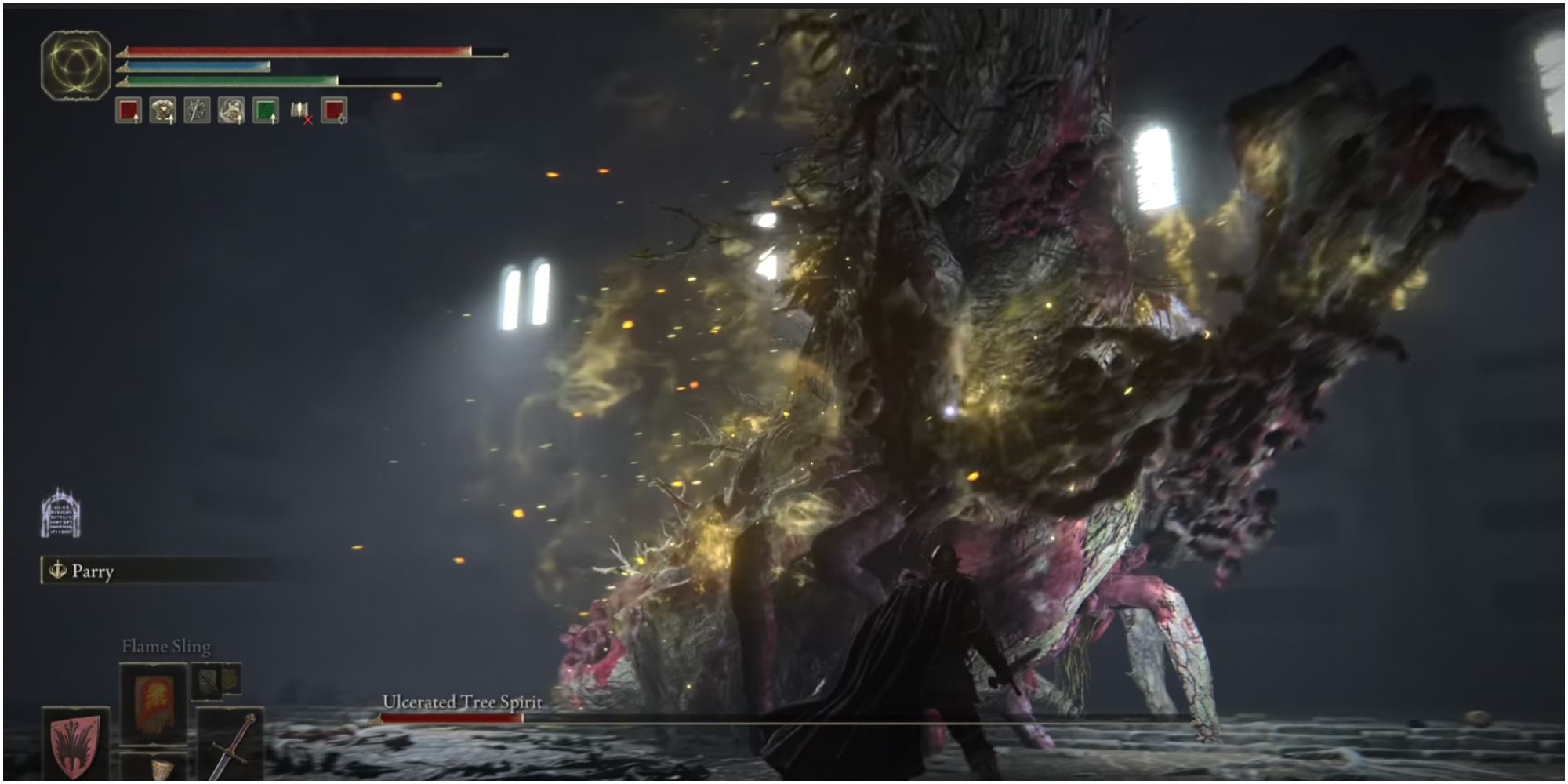 In this attack, the boss locks its hands together and slams them onto the ground.

Counter: Once more, roll to the side to avoid this devastating attack. 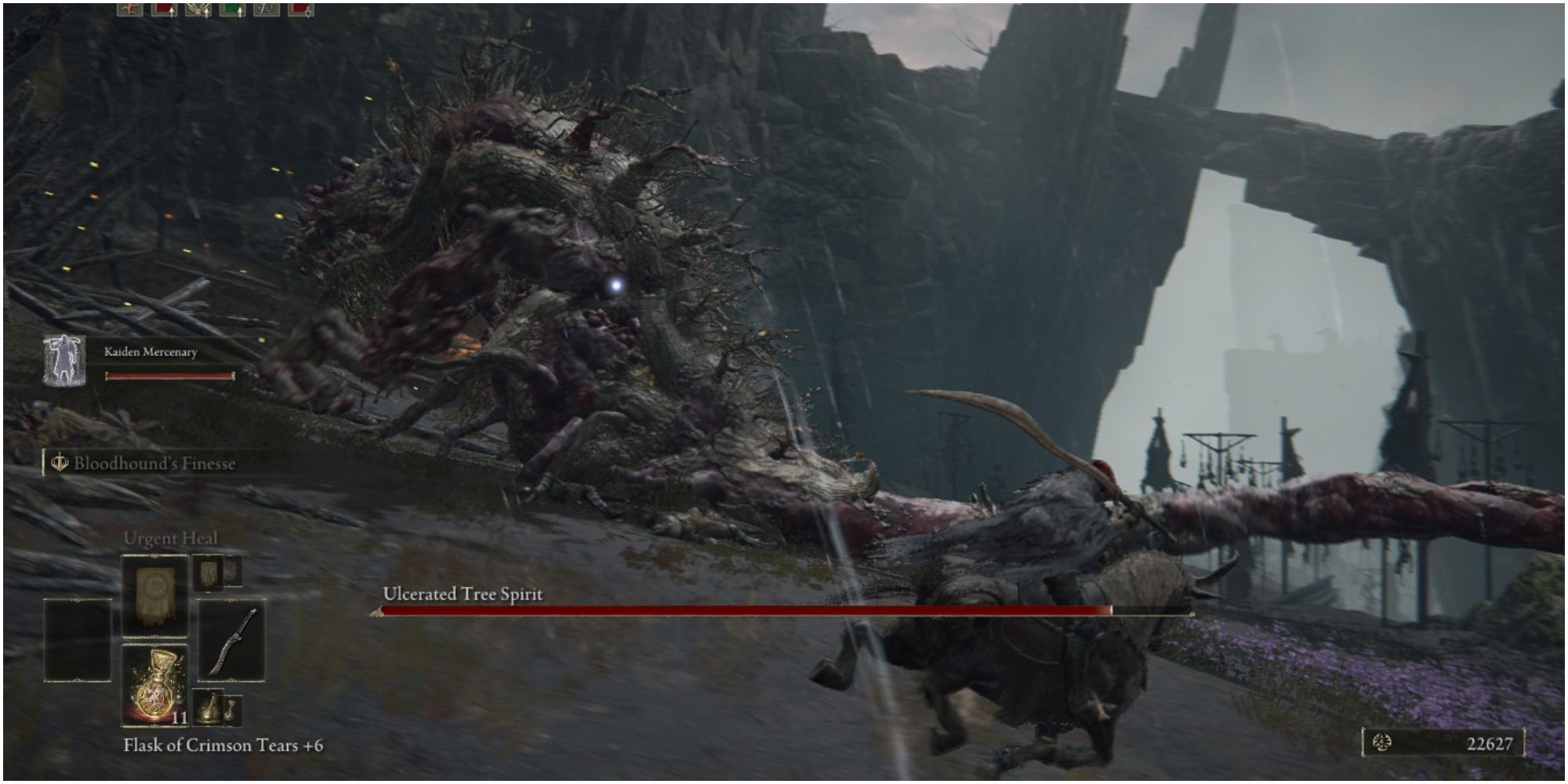 There are two different strategies you can use to approach this boss. Since this boss is extremely aggressive and moves around a lot, being a melee combatant is going to be more difficult than being a ranged fighter, as the latter can still keep their distance while dealing damage. Using Ashes of War can help defeat this boss faster and more efficiently, specifically ones that deal fire and frostbite damage. As for weapons, upgrading your blade to a +6 will be sufficient in dealing with this wily worm.

For Mount Gelmir's Ulcerated Tree Spirit, using Torrent is recommended. Take advantage of the vast, open area and mount Torrent, dealing blows while galloping away from any of the attacks. 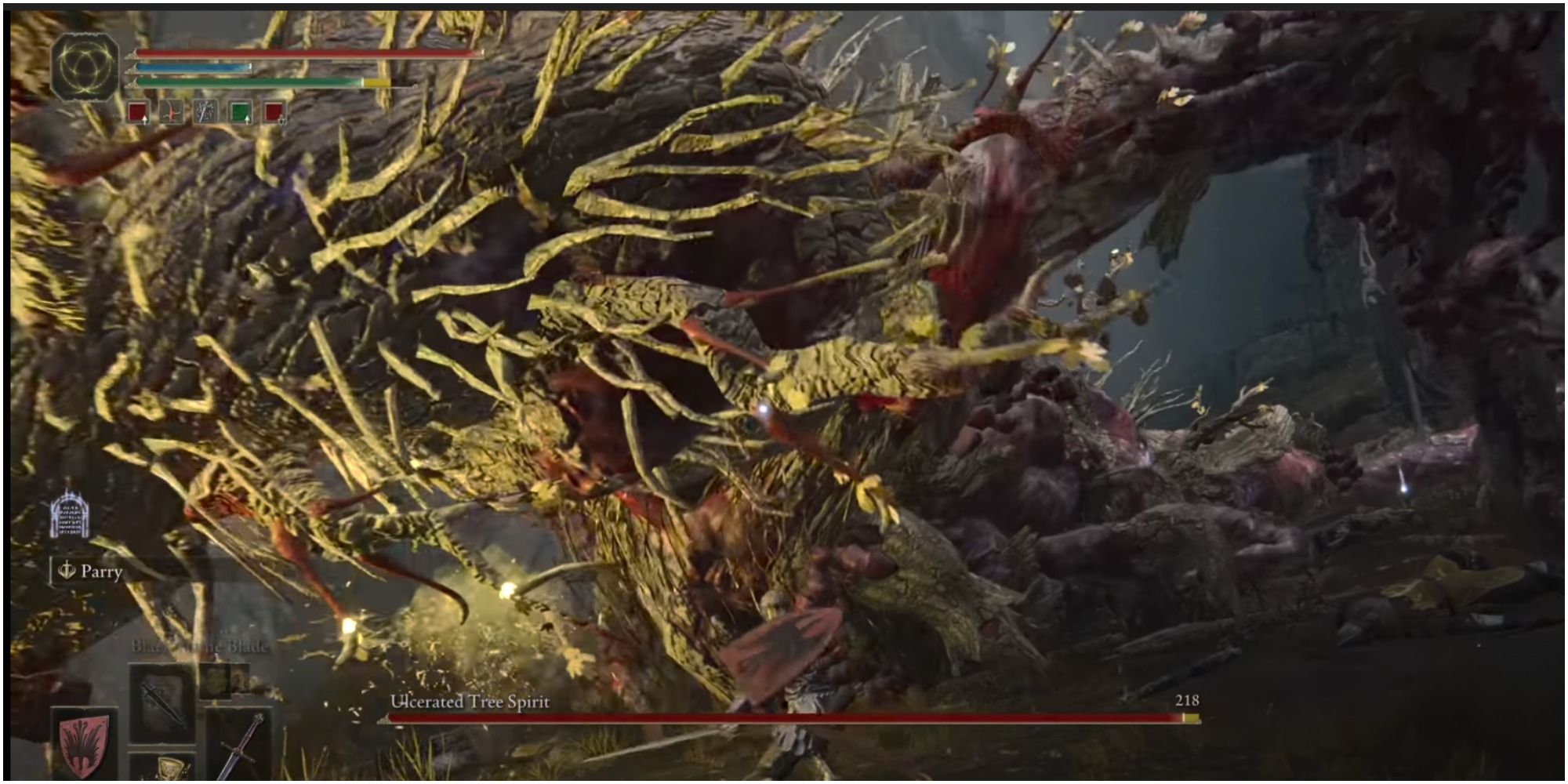 For melee combatants, you'll need to upgrade your weapon up to +6, as well as summon a tanky Spirit Ash to back you up if things get tricky. Coating your weapon with either Fire or Freezing Grease will help increase the attack power of your blade. Aside from using different types of Greases to give your weapon an added boost, you should consider using Ashes of War such as Hoarfrost Stomp or Flaming Strike to target its weaknesses.

But remember to upgrade your chosen Spirit Ashes up to a +5 so that they can keep up with you. Using weapons such as Moonveil Katana or any Colossal-type swords is recommended to pack that extra punch. Also, you can never go wrong with some Opaline Bubbletear. 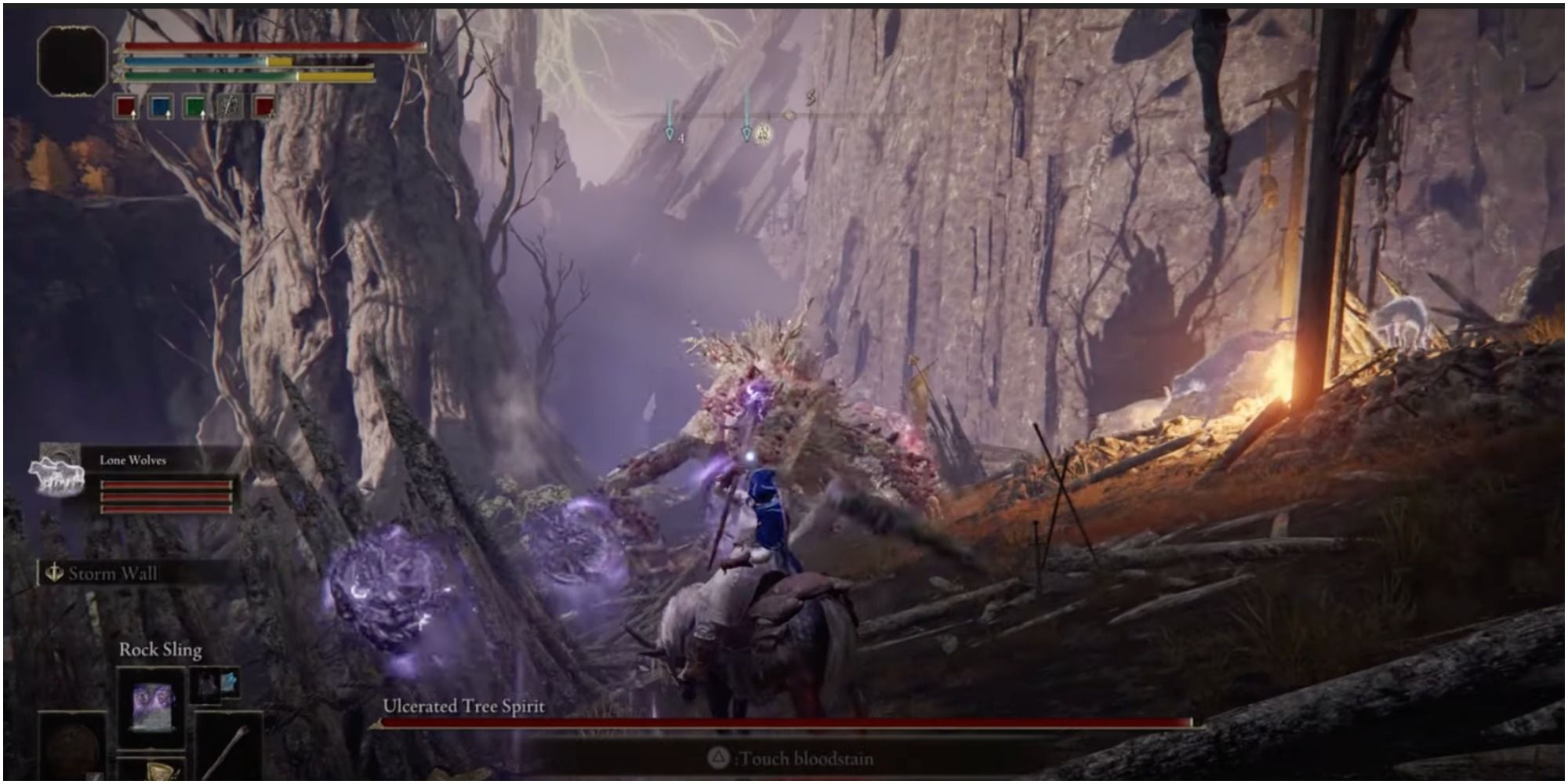 As mentioned before, ranged combatants have a bit of a leg up in comparison to melee fighters. As a sorcerer, using a Spirit Ash summon to assist is still recommended. But as for sorceries, any that deal Physical, Fire, or Frostbite damage will be effective against an Ulcerated Tree Spirit.

Sorceries such as Rock Sling, Comet Azur, or Night Comet are recommended for this boss. You should also consider wielding any of the Dragon Communion Incantations, especially Dragonfire or Agheel's Flame. Equipping Opaline Bubbletear to increase your defensive capabilities is advised against such a violent foe.