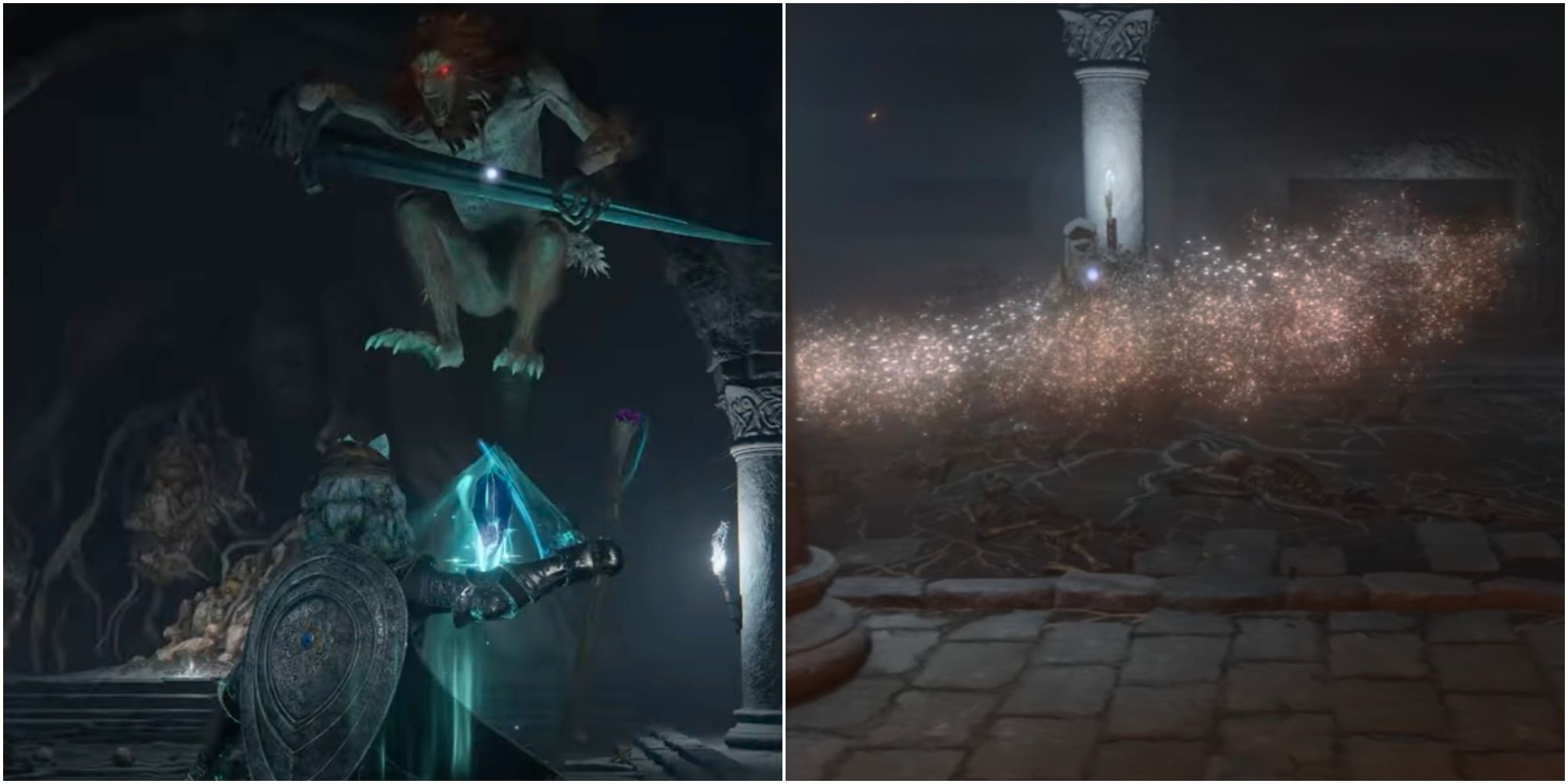 Elden Ring is rife with boss fights where you have to fight either two or three enemies at the same time, but there are some duo pairings that are ten times more difficult than others. When you pair a boss that is known to be extremely aggressive with one that inflicts ranged attacks, it seems like hell on earth. But there is no worse pairing than Mount Gelmir's Perfumer Tricia and Misbegotten Warrior. 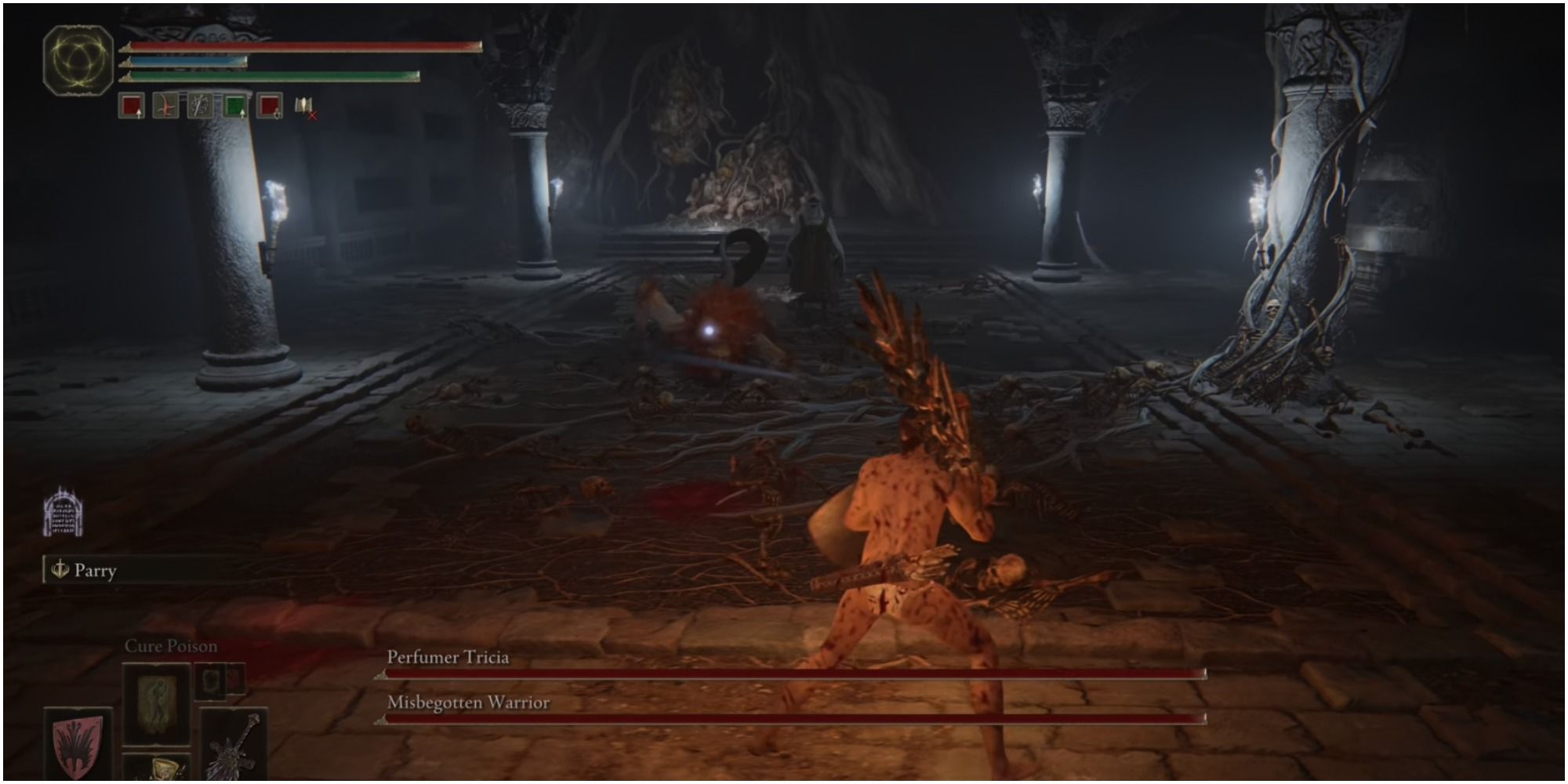 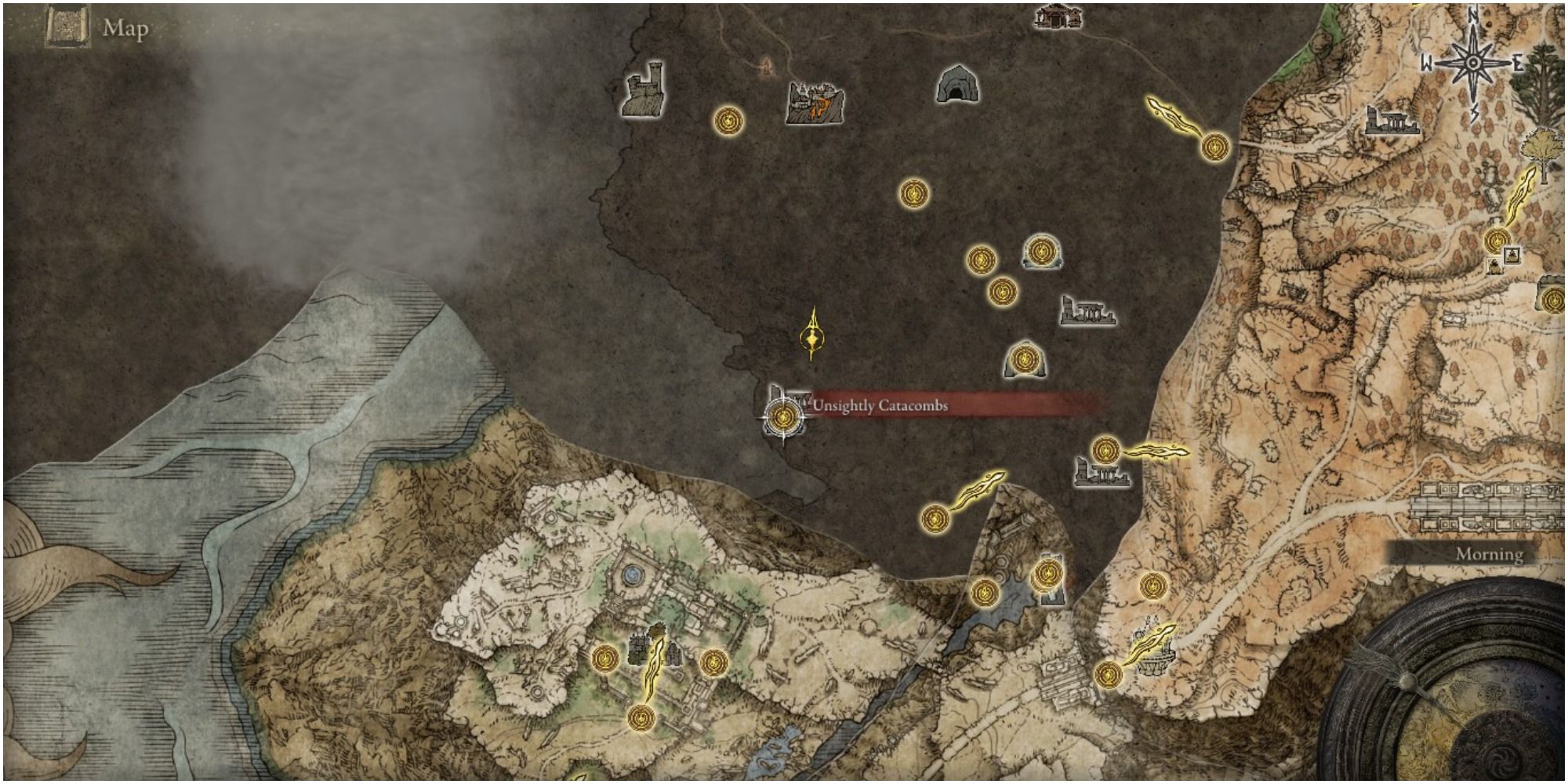 Located in the Unsightly Catacombs in Altus Plateau, the closest Site of Grace is the Craftsman's Shack Site of Grace. This catacomb is quite difficult, due to the number of challenging enemies — such as Misbegotten or Ogres — to get through, before reaching both the boss door and the lever to open it. However, once you do, you might be both disappointed and annoyed to have to fight the Misbegotten Warrior after your encounter with Leonine Misbegotten in Castle Morne.

Each boss has their own health bar, but Tricia is easy to defeat. It goes without saying that the boss you have to be careful of the entire time is the Misbegotten Warrior, as its range and attacks are absolutely devastating. It is certainly recommended to use a Spirit Ash summon that is categorised as a tank, or simply have your buddies tag along for some additional support. 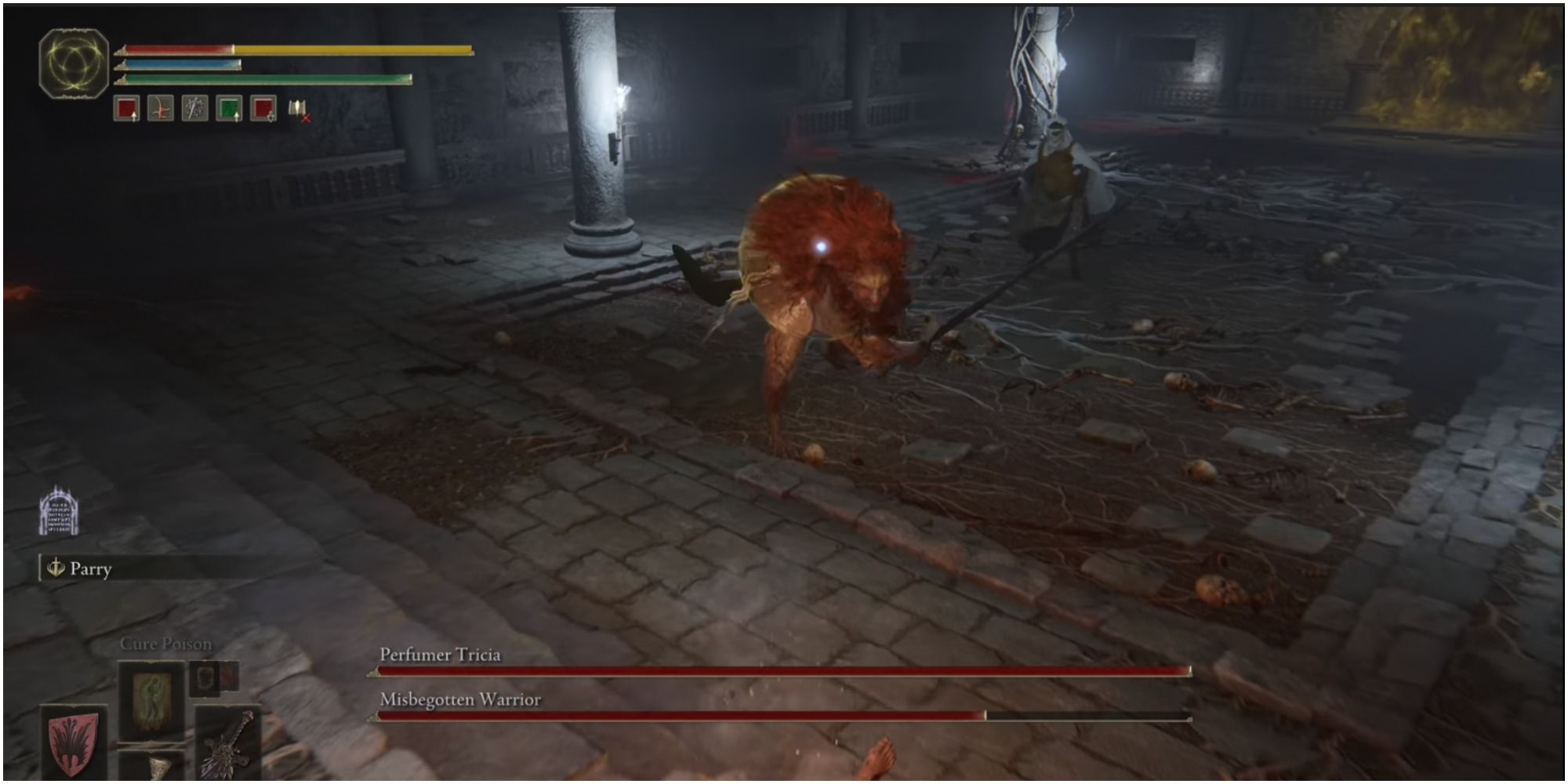 Both Perfumer Tricia and Misbegotten Warrior have their own respective set of attacks. The latter is largely a melee fighter, an absolute brawler, while Tricia mainly uses arcane attacks and switches to melee if you get too close. Here are the full range of attacks you have to watch out for. 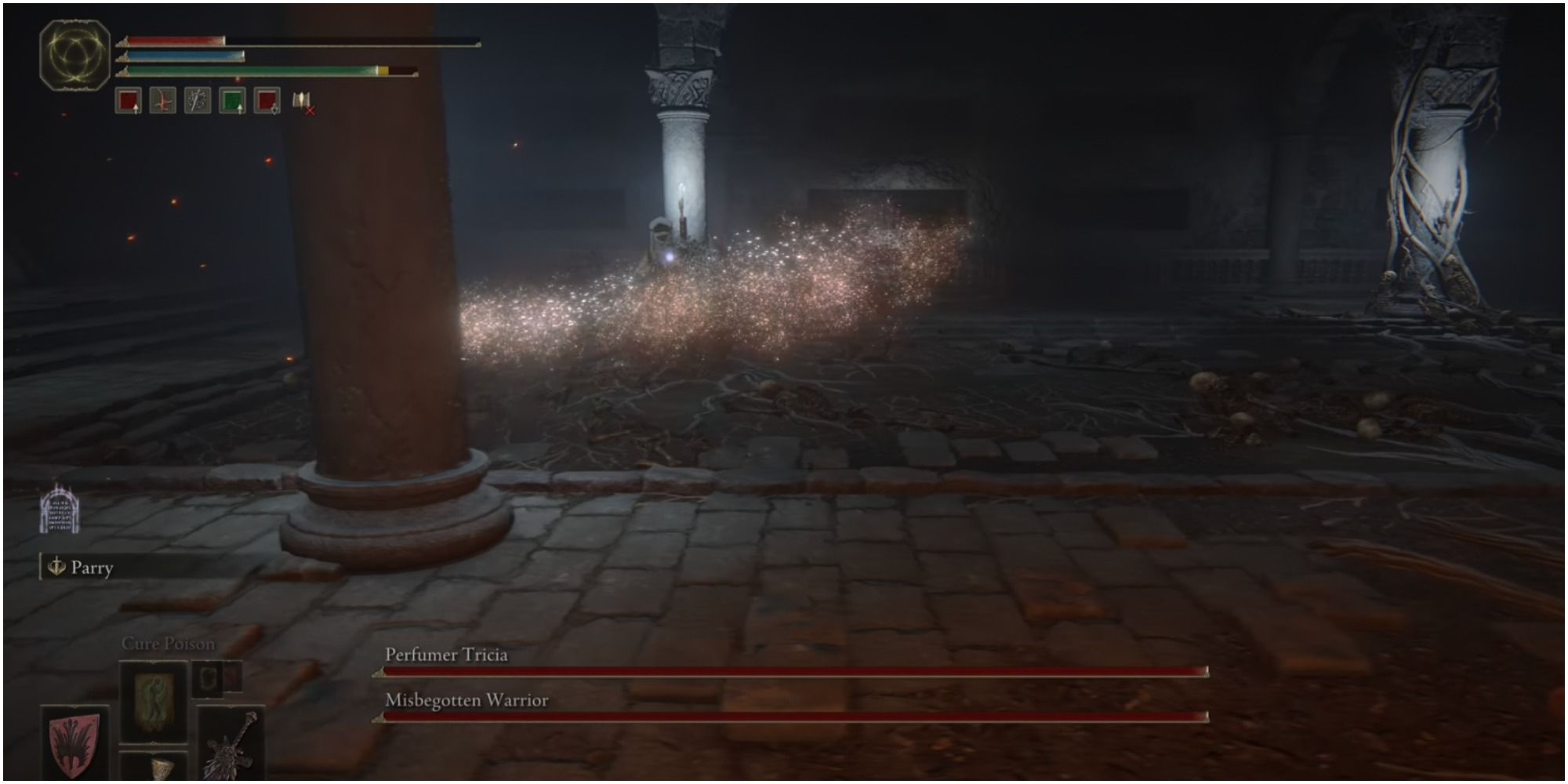 For this attack, Perfumer Tricia will unleash a shimmery spray. This attack is more brief as it bursts into flames not long after.

Counter: Use a shield, Opaline Bubbletear, or roll as far away. Always keep an eye out for the Misbegotten Warrior. 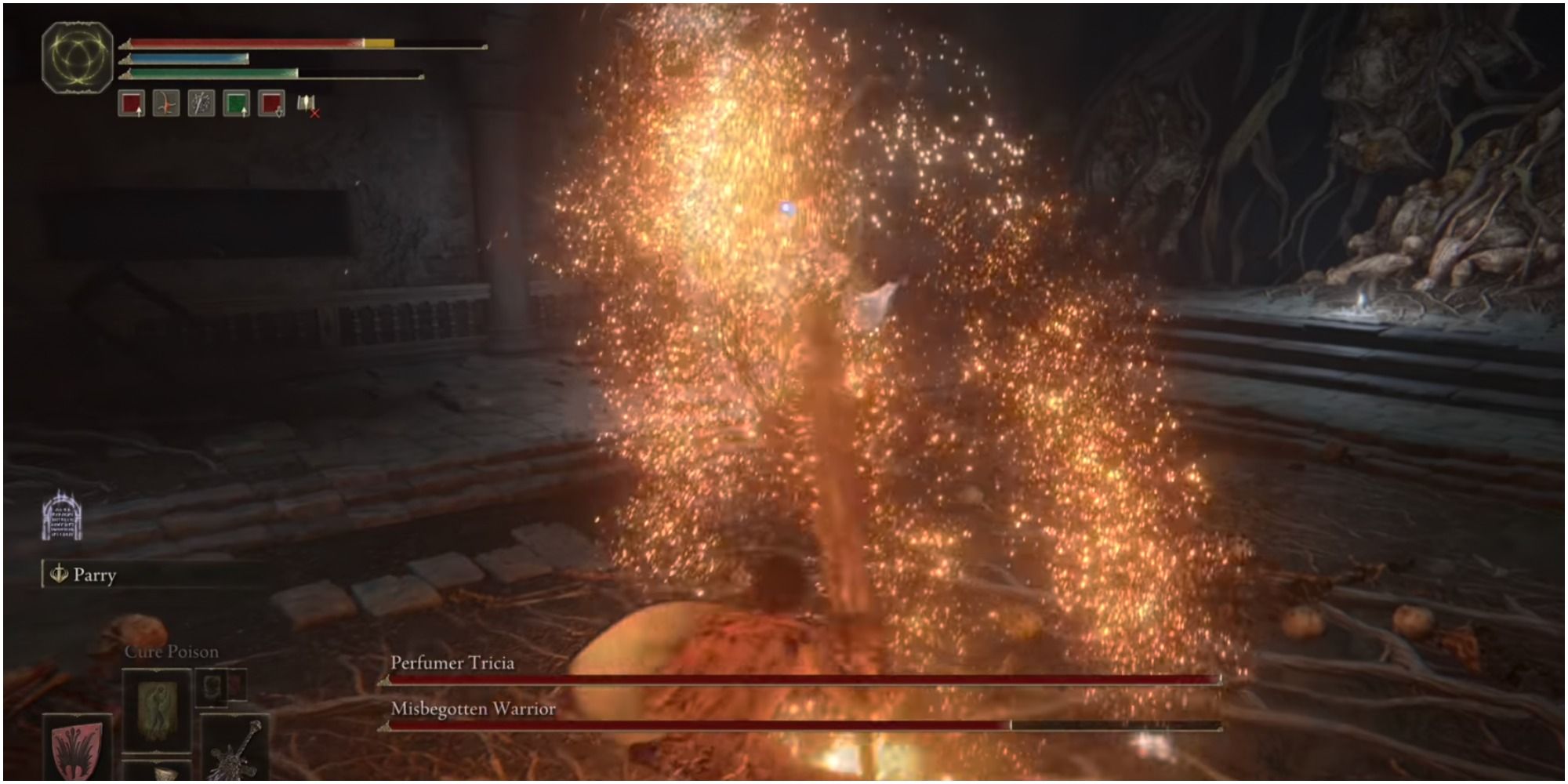 This attack lasts longer, and it detonates into a fiery explosion as soon as it nears the ground.

Counter: Roll backward as far as you can from its range of attack. 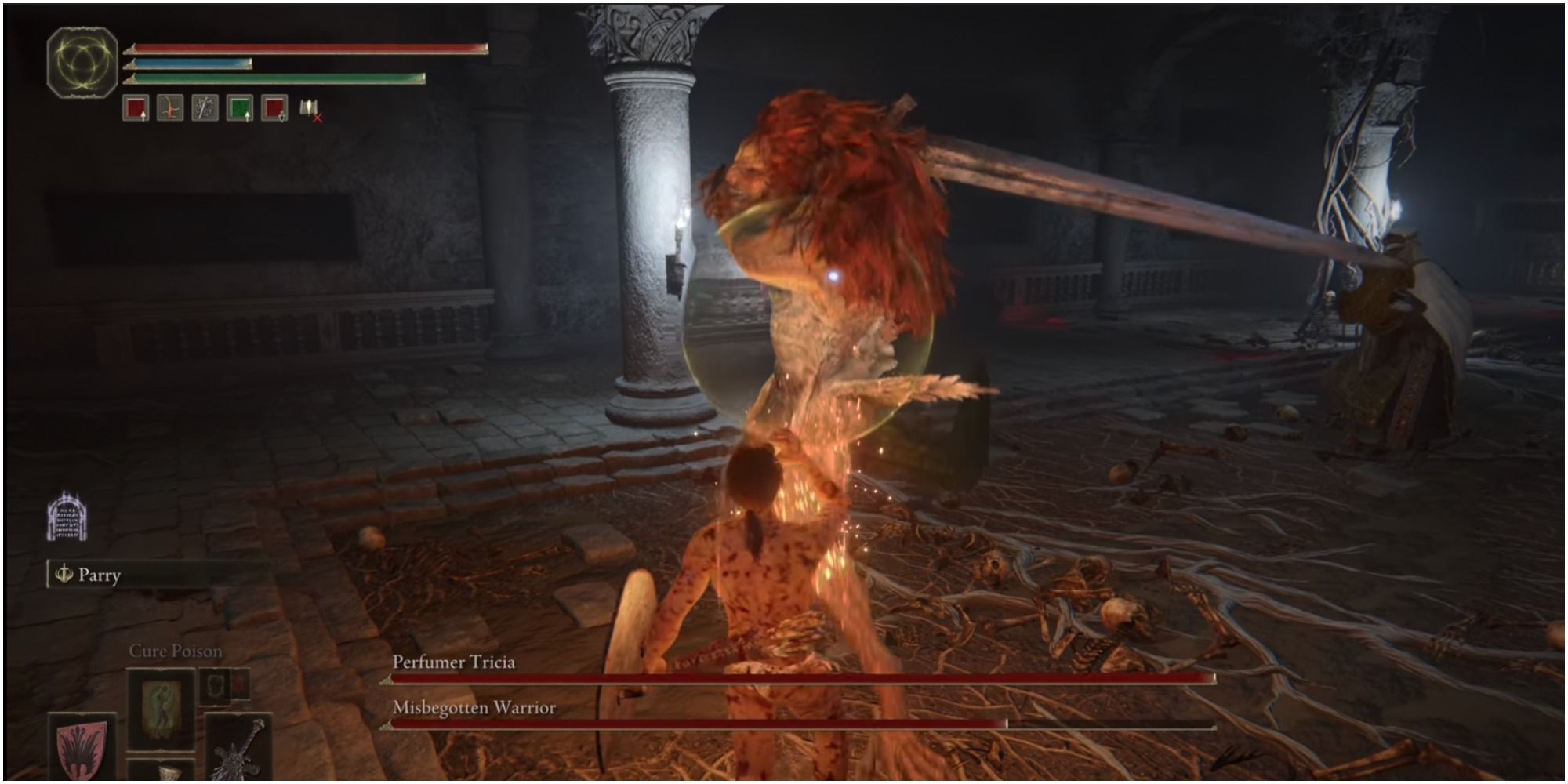 As if the battle isn't hard enough, Perfumer Tricia will shield the Misbegotten Warrior with an Opaline Bubbletear and increase its defensive capabilities.

Counter: One hit can obliterate this shield, but make sure to back out immediately to avoid sustaining damage from the Misbegotten Warrior's counterattack. 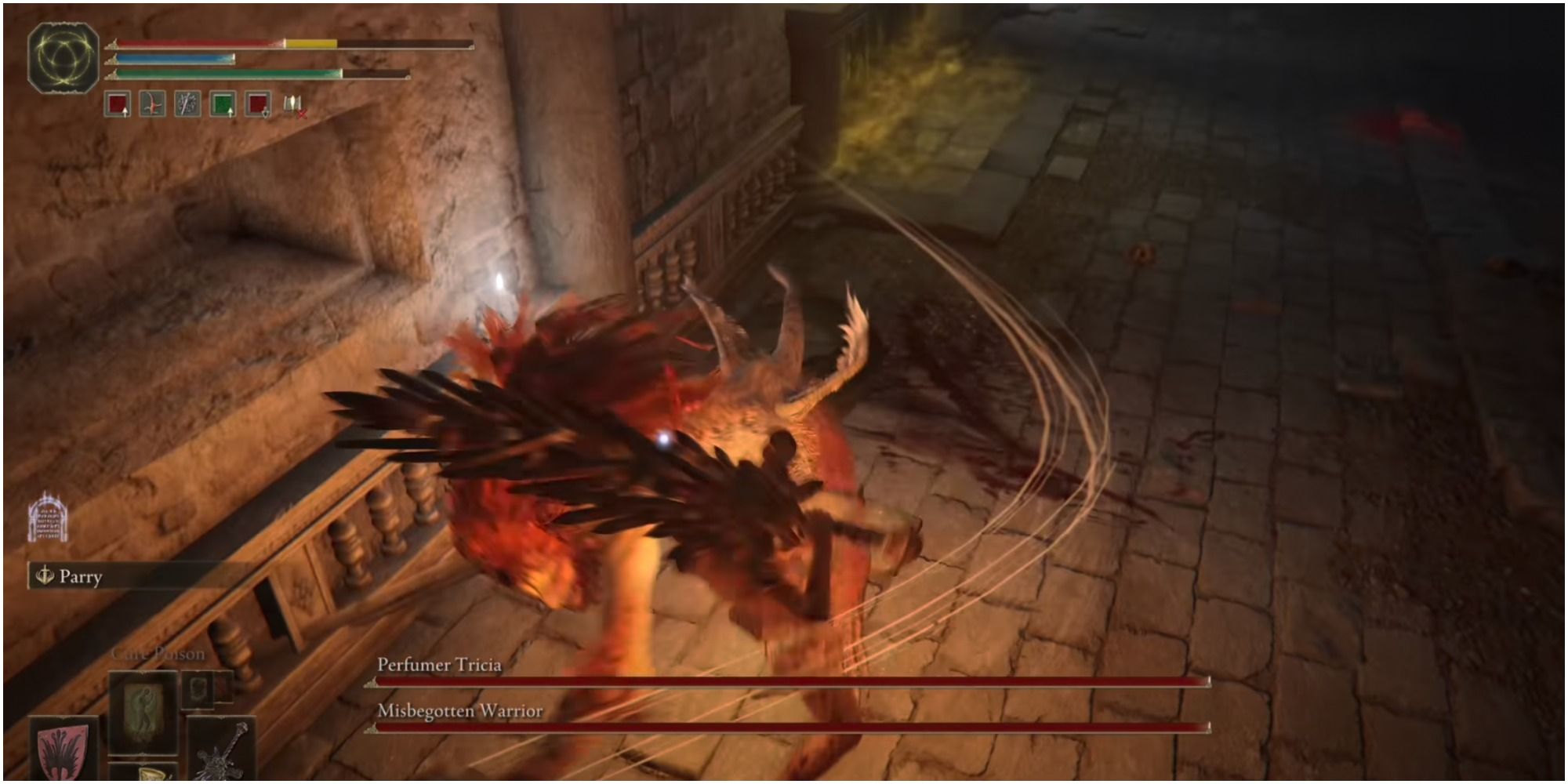 Using its free hand, the Misbegotten Warrior swipes at your with its claws twice, and it takes away chunks of HP.

Counter: Roll away from the boss or use a shield. 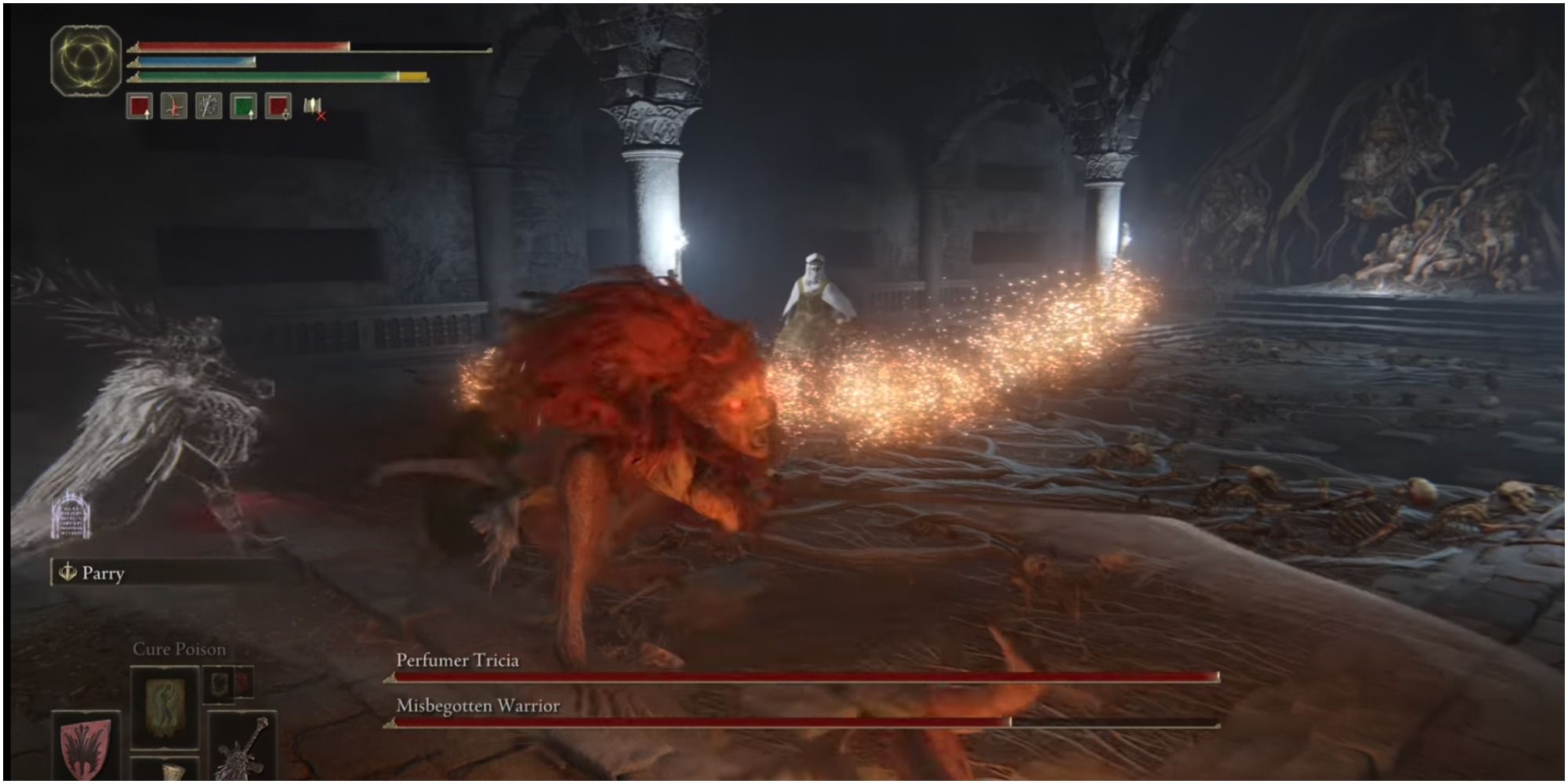 Counter: You can use a shield or simply roll away from its attacks. 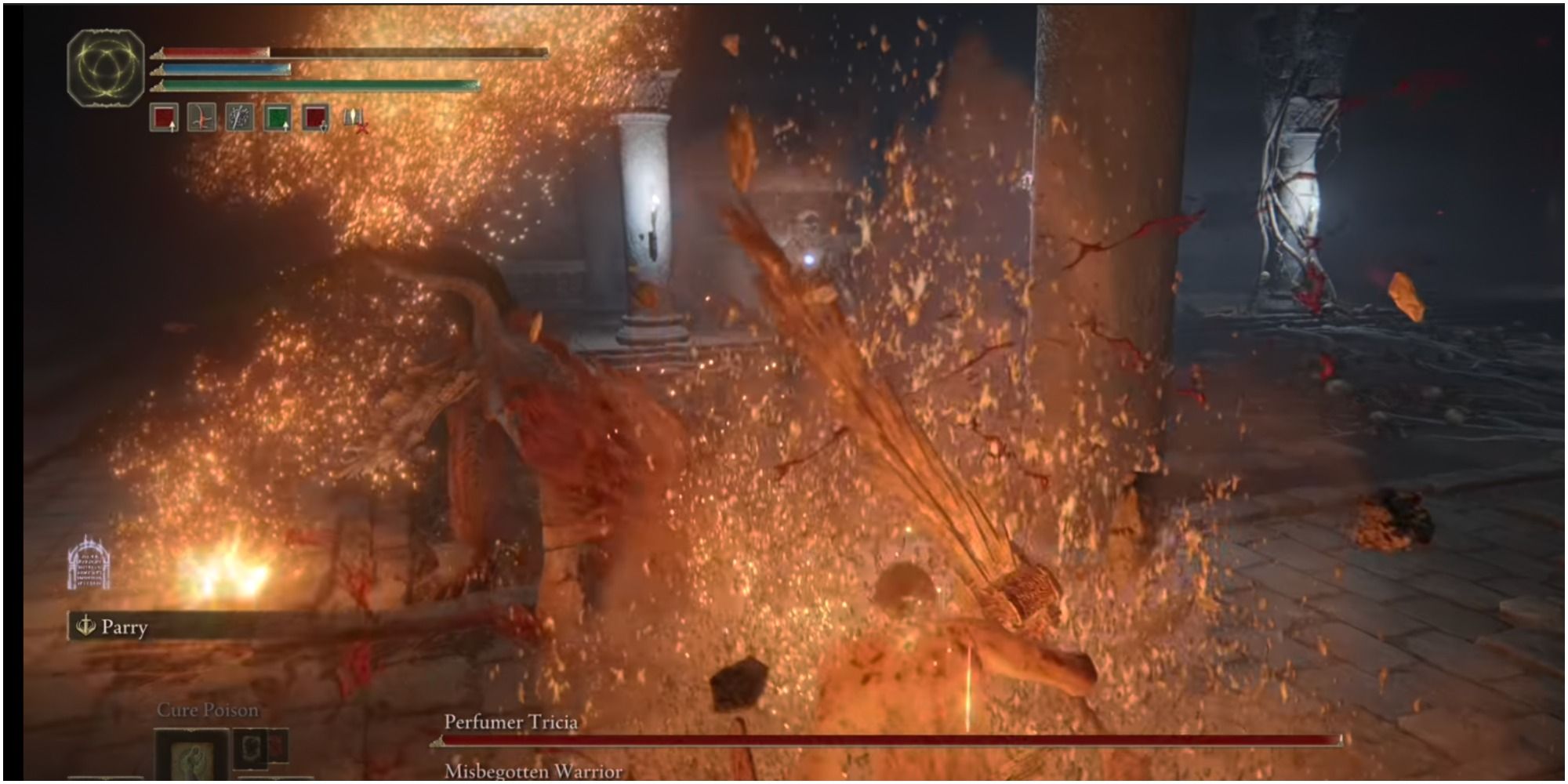 Misbegotten Warrior rises to its feet and holds its weapon aloft, before slamming it down in order to squash you into a pulp.

Counter: As soon as you see it rise up to its feet, roll away immediately. 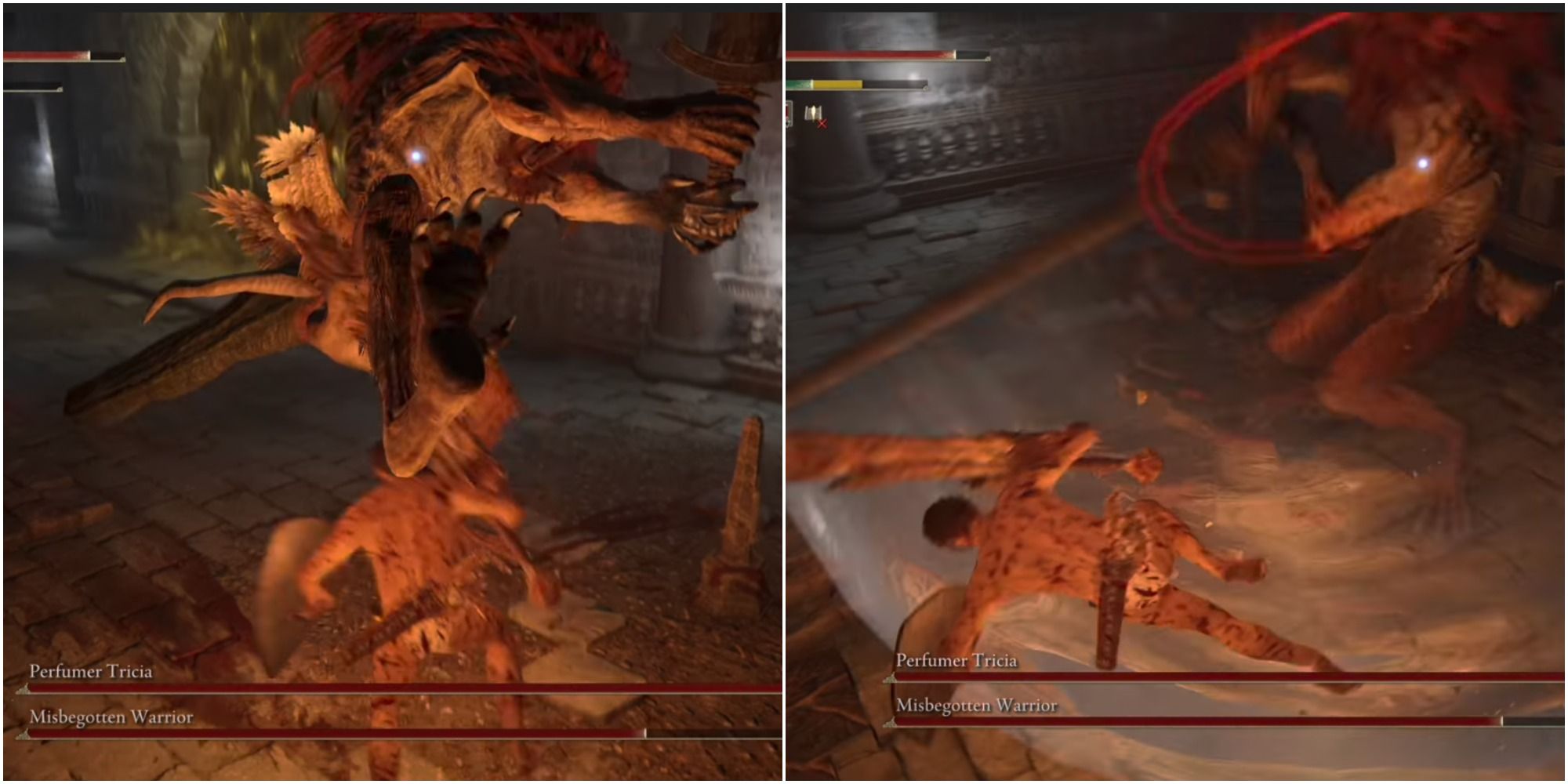 Most likely the Misbegotten Warrior's most devastating attack, it will first screech and its eyes will glow red. Then it will stomp and proceed with two twirls with its greatsword.

Counter: The best bet is to distance yourself the moment it performs a stomp, or roll to the left during the first twirl and roll forward. Rolling backward in the second twirl most often will get you caught by that second swing. 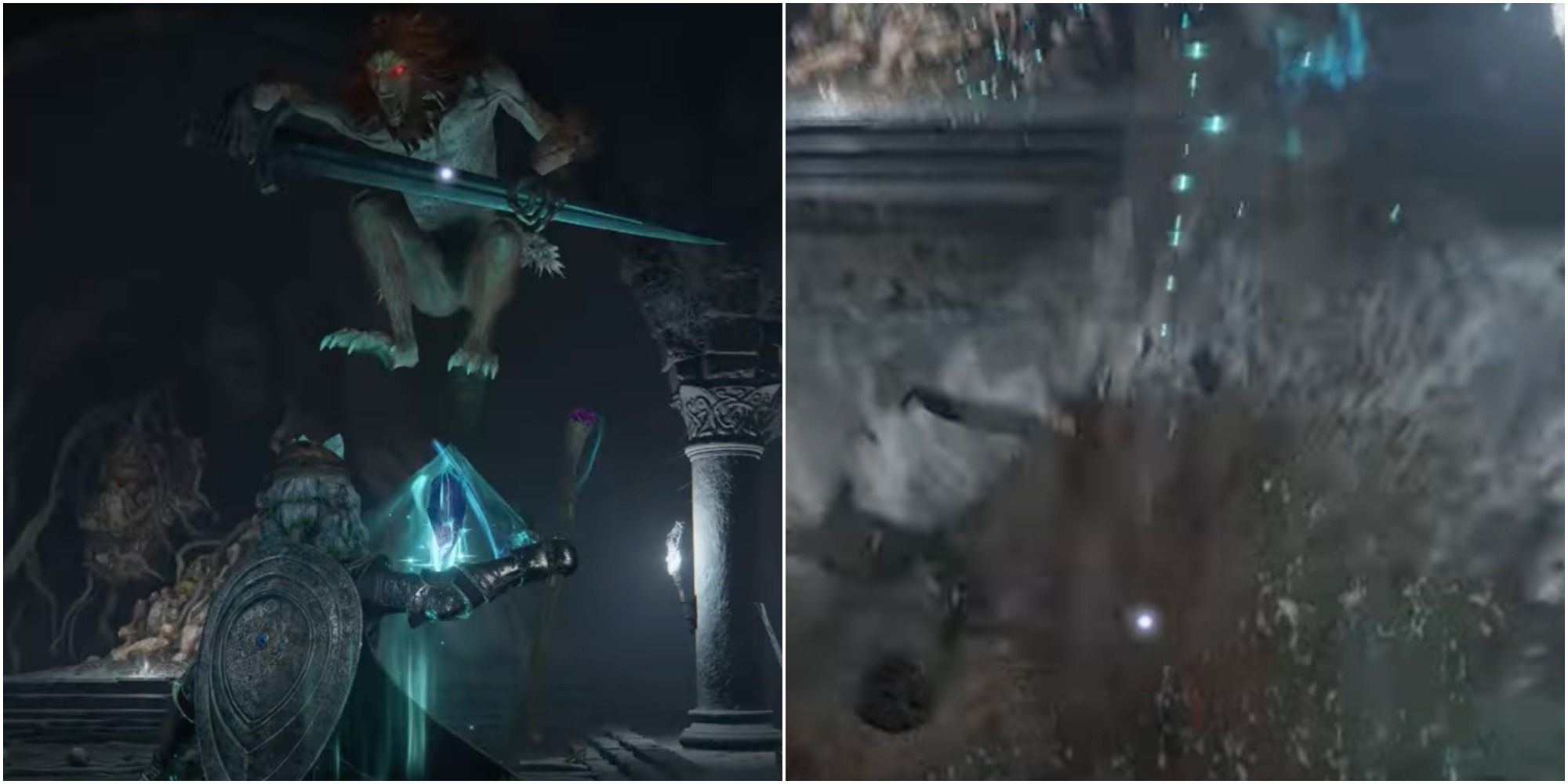 For this attack, the Misbegotten Warrior will hold its blade with both hands in a horizontal manner whilst in the air, before slamming onto the ground hard.

Counter: To counter this, simply roll away. 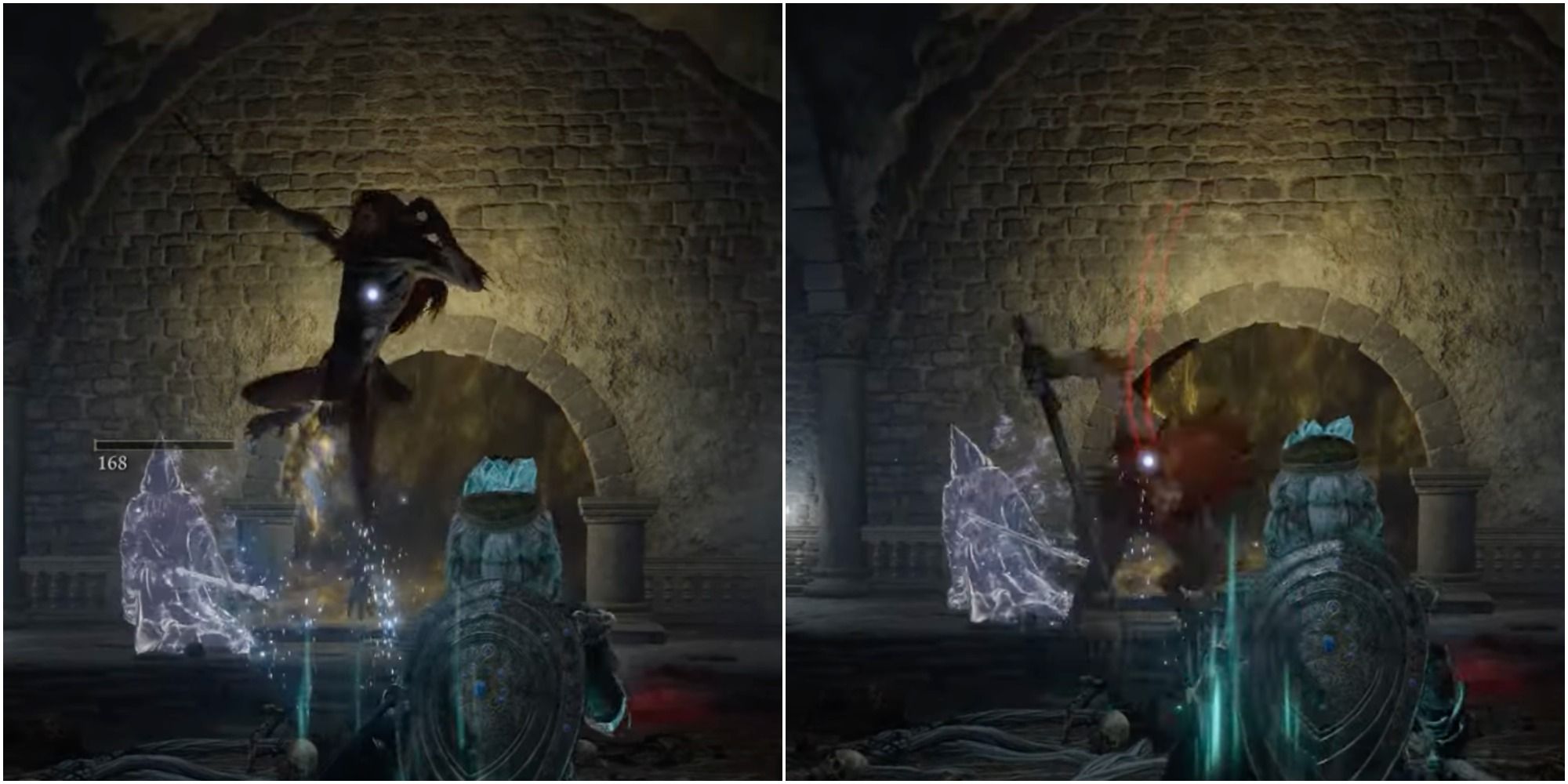 Unlike the other leaping attack, Misbegotten Warrior will pull back its arm and dive down to thrust its weapon into the ground.

Counter: Again, a roll away the moment you see it leap into the air.

RELATED: Elden Ring: How To Defeat All Death Rite Birds 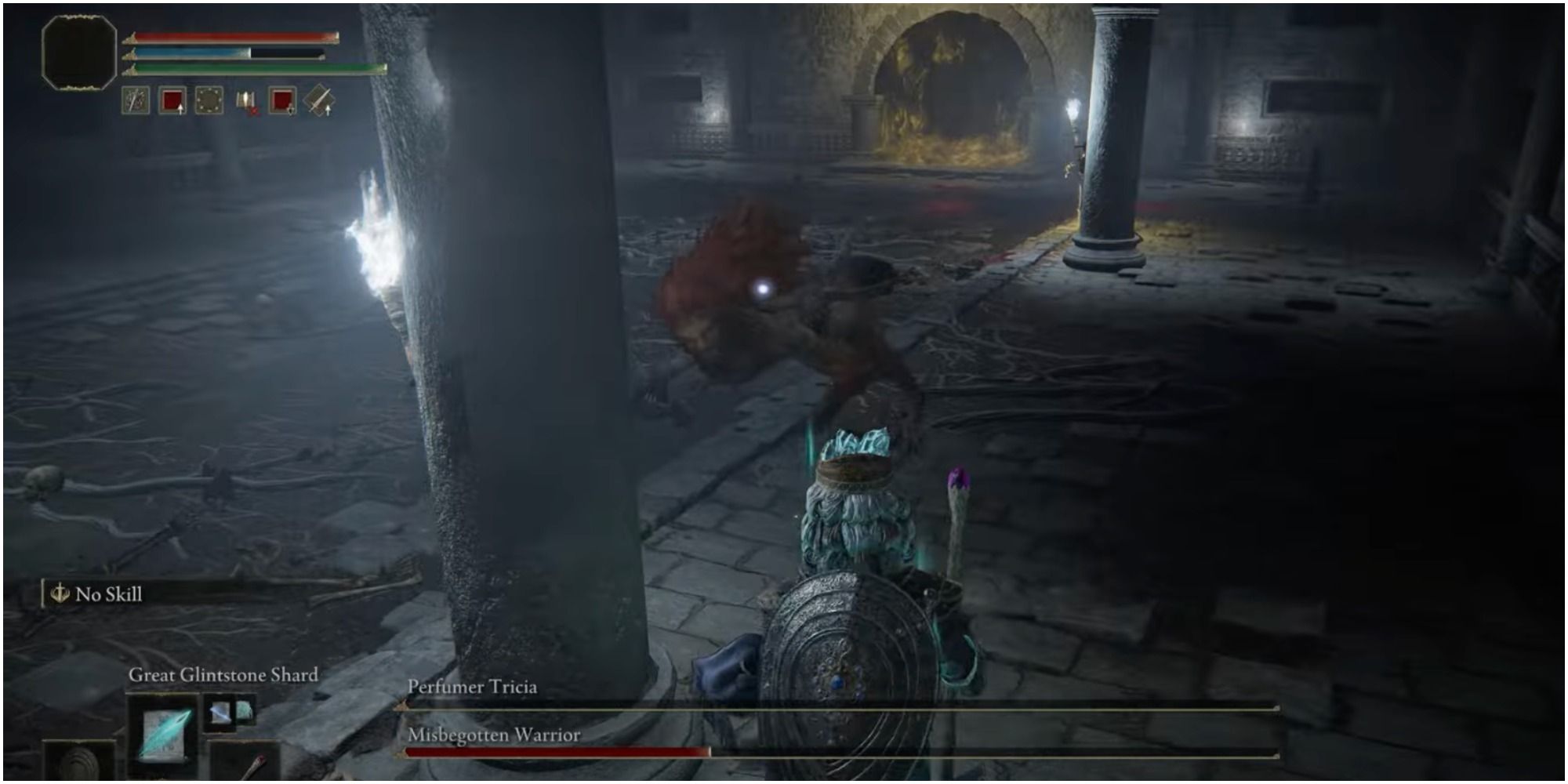 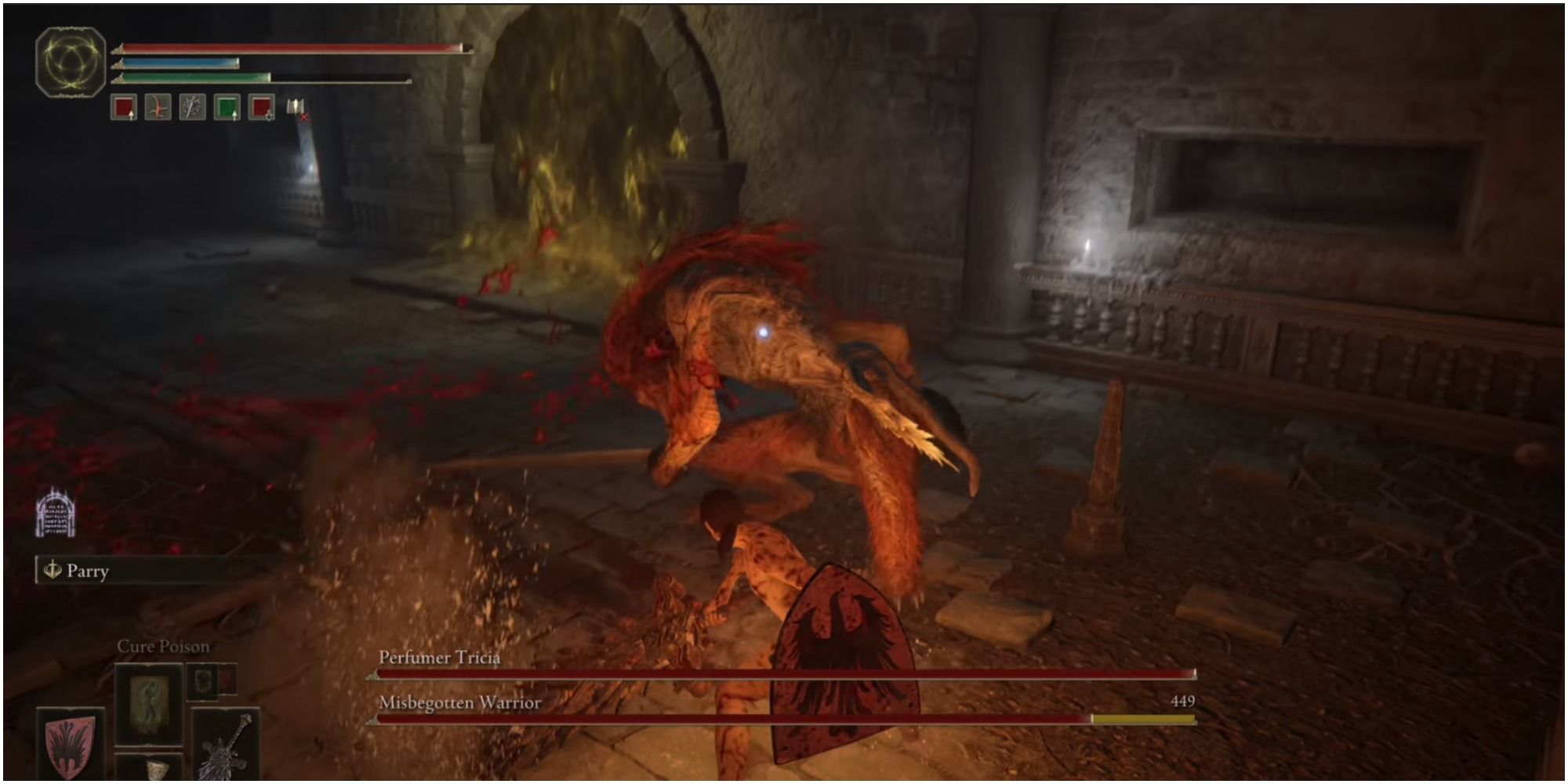 For melee fighters, using a shield will be helpful in negating some of Misbegotten Warrior's basic attacks, such as the claw or swing attacks. As mentioned before, it is recommended to use Spirit Ash summons that are built like tanks, such as the Kaiden Mercenary or Lhutel the Headless. You can also use Lone Wolf Ashes or Pumpkin Head to keep one of them occupied.

For weapons, using a greatsword paired with a passive Bleed effect is effective for this fight, with the Bloodhound's Fang a good option. You can also consider using a flail or the Uchigatana to inflict damage. Furthermore, Perfumer Tricia should be dealt with first, as her HP is not as high as that of the Misbegotten Warrior, and a backstab could even one-shot her. 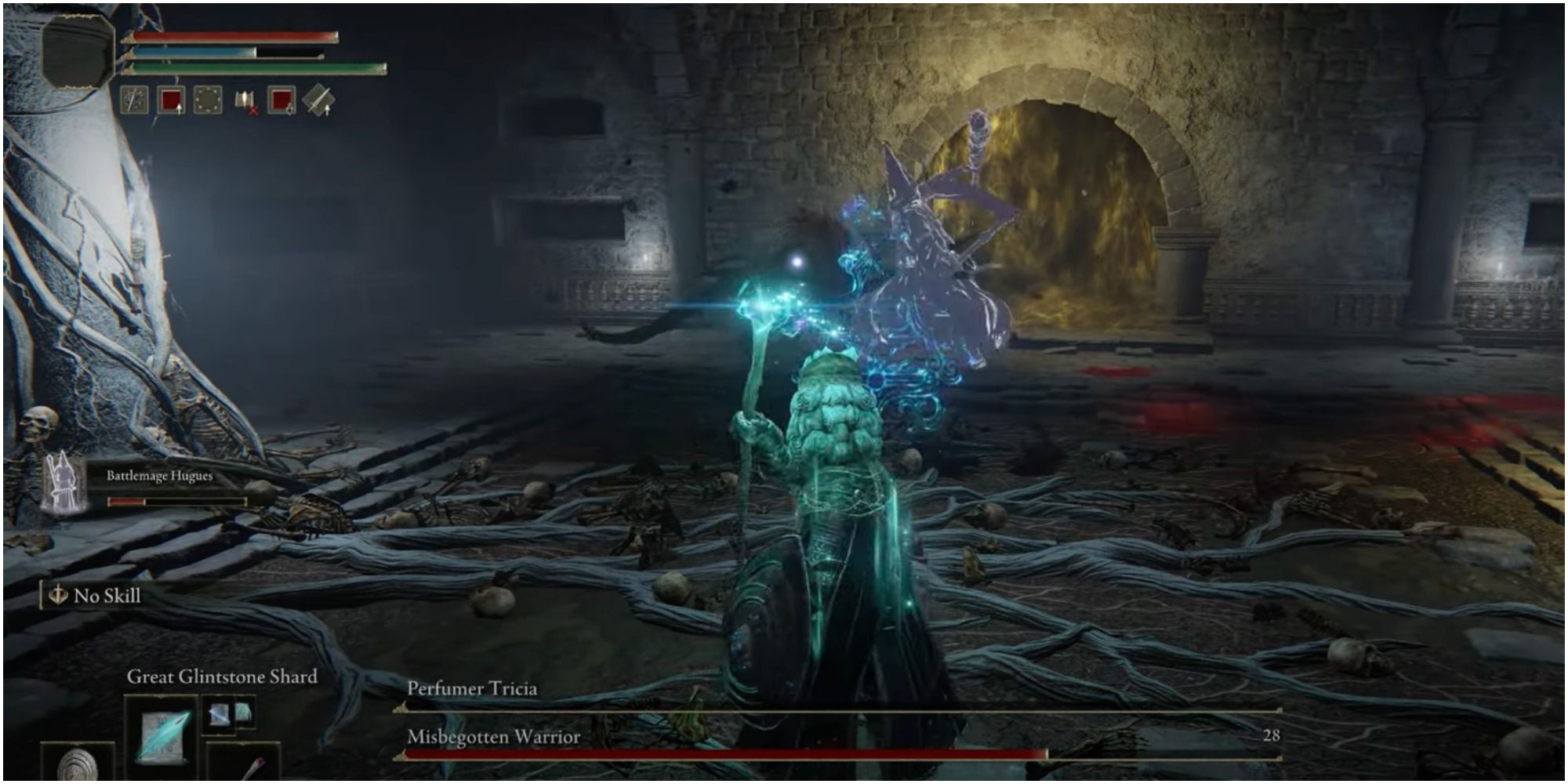 For ranged combatants, inflicting as much physical damage on both bosses is key. Use Spirit Ashes with high defenses, such as Lhutel the Headless, to occupy the Misbegotten Warrior while offing Tricia first. Sorceries such as Flame Sling, Night Comet, and Great Glinstone Shard are great options for dealing with Misbegotten Warrior.

If the raging lion gets too close and you cannot avoid it in time, make sure you have Opaline Bubbletear or a shield equipped prior to passing through the fog wall.